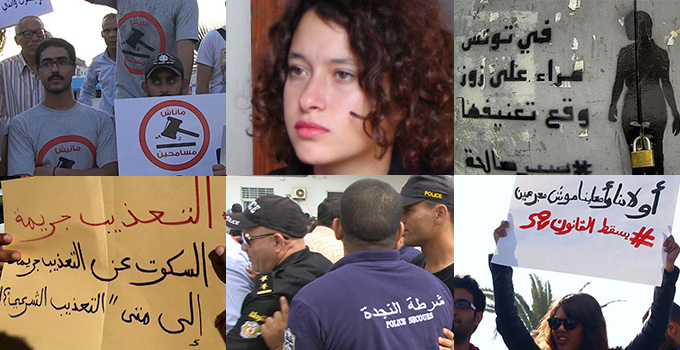 If some will remember 2015 as the year Tunisia’s National Quartet was awarded the Nobel Peace Prize, others will recall that it was citizens’ struggles online and on the ground which kept the country on track. Three terrorist attacks and a series of superficial security measures did not deter Tunisians from organizing to voice demands for their socio-economic rights and constitutional freedoms of expression, privacy, and human dignity. For every act of terrorism, state violence, repressive law imposed or proposed over the past year, citizen-born movements and demonstrations were carried out to sustain and further the gains of the revolution.

Counterterrorism: security over rights and liberties

A majority of Tunisians are prepared to relinquish “a little” freedom for more security, suggested the results of a controversial poll in November. Although the choice between freedom and security may be an artificial one, it remains at the forefront of counterterrorism discourse in Tunisia, a decision that Tunisians have been asked to make with each terrorist attack that occurred in the past year.

More than security, human rights are threatened in Tunisia

Three terrorist attacks and a “state of emergency”: Proposed in the weeks following the Bardo Museum attack and adopted one month after the attack in Sousse, the country’s new counterterrorism law epitomized a misguided debate around laxity against despotism, security versus human rights. Public figures and human rights advocates criticized broad and ambiguous language defining “terrorist activities” and “apology to terrorism”; provisions allowing for a pre-charge detention for up to 15 days (as opposed to a total of 6 under the previous law of 2003), and the death penalty. Dozens of civil society organizations called upon decision-makers to include measures that would prevent violations during detention, guarantee the right to a fair trial, and ensure the protection of privacy.

After the November 24 bomb explosion in Tunis which killed twelve members of the presidential guard, Prime Minister Habib Essid announced that «the counterterrorism law will be applied down to the letter, without any leniency». A discourse promoting national unity and the implementation of superficial security measures characterized the government’s lack of a strategic approach to counterterrorism in 2015.

Covering the aftermath of the suicide attack on the evening of November 24, journalists were aggressively dispersed by plain-clothes security agents. Several were wounded and transported to the hospital; one reporter was arrested and, before being released, the material on his camera erased. Far from glossing over the police aggression in the hours following the attack, national television stations justified it. Analysts, journalists, and public figures invited to speak on El Hiwar Ettounsi, Watania, and Nessma dismissed or categorically denounced discussions pertaining to human rights in the face of such grave security threats.

Security agents descend upon Halq al Wadi: At 2 o’clock in the morning of November 27, dozens of families were startled from sleep as security forces stormed some sixty households in a neighborhood of Halq al Wadi (La Goulette, Tunis). According to several accounts, doors were bust open as agents burst into homes, blinding inhabitants with flashlights and rifling through dressers. Pointing to broken locks and bullet-holed doors, residents denounced the violent intrusion of security forces into their homes, one woman asserting that “we didn’t know if they were terrorists or police officers.” Many were arrested, but no evidence of terrorist activities was discovered.

In spite of heightened security measures and police presence in the streets, Tunisians did not cease to gather in public spaces to voice social and economic demands. Among the main issues addressed in 2015 were land and resource management, the absence of a development strategy and programs in the country’s regions, and the political push to forgive past economic corruption.

Winou el Pétrol: Born on Facebook, the Winou el Pétrol movement confronted corrupt resource management and demanded transparency and better governance of the country’s natural wealth. The campaign gained considerable visibility in June after citizens took to the street with signs which asked Winou el pétrole?—”Where is the oil?” Demonstrations from the capital and the south of the country turned into violent confrontations between protesters and security forces.

‘Where’s our Oil?’ : the (continued) confusion of politics and resource management in Tunisia

In Tunis, protest organizers were arrested and the National Union of Tunisian Journalists (SNJT) denounced police aggression against six journalists who had been covering the event. In Douz (governorate of Kebili), where demonstrators had planned a sit-in before the Perenco gas and oil company, skirmishes between marchers and police sparked several days of violence which culminated in the burning of a security vehicle and the evacuation of the National Guard before a replacement army was sent in.

Economic reconciliation and Manich Msameh: What President Beji Caid Essebsi advanced as “primordial” in building up Tunisia’s economy, critics decried as a throwback to the unbridled wealth accumulation of a select few with close ties to the Ben Ali family. Back in March, Essebsi alluded to the idea of “economic reconciliation,” and, several months later, the Council of Ministers adopted Draft Law N°49/2015 prescribing exceptional measures for economic and financial reconciliation.

Participants of the Manich Msameh (“I will not pardon”) movement voiced their adamant disapproval of the proposal, many arguing that it would undermine the country’s transitional justice law and affiliated authority, the Truth and Dignity Commission (IVD). Between September 8 – 21, protests were organized in some twenty cities throughout the country; in Mornag, Nabeul, Gabes, Monastir, Sousse, crowds were effectively dispersed and a number were arrested. In Tunis, where hundreds of demonstrators in three separate marches converged in front of the Ministry of the Interior, the events of September 12 proceeded in relative calm; police stationed on and around Avenue Bourguiba searched protesters’ belongings and kept watch of the area.

The presidency’s draft law was overturned and subsequently resurfaced in the form of Article 61 of the 2016 Finance Law. Considering the article in question and several others unconstitutional, thirty-one parliamentary deputies appealed to the Provisional Authority on the Constitutionality of Draft Laws (IPCC); of the ten articles challenged, the Authority judged five, including Article 61, to be unconstitutional.

Land management: In 2015, Nawaat investigated long-standing conflicts between small farmers and private investors stemming from the management and exploitation of State-owned lands in Jemna (governorate of Kebili) and Chouigui (governorate of Manouba). Since 2011, the Association for the Protection Jemna’s Oases, a collective of Jemna residents, has been unsuccessful obtaining recognition from the government and the legal status which would enable it to provide workers with social security benefits.

In Jemna, locals manage oases to reap the fruits of their labor

In Chouigui, the dissolution of the farmers cooperative in 1991 and the repartition of properties by the Office of State-owned lands marked the beginning of the current conflict; Chouigui residents have since attempted to regain the land from the private operator who they accuse of poor management and of having betrayed employment promises.

Farmers assemble in the capital: On September 2, thousands of farmers and fishermen gathered before the Tunisian Union of Agriculture and Fisheries (UTAP) in Tunis. Under the banner of “Farmers’ Day of Anger,” demonstrators called upon the government to address the issues of debt, property rights, water management, and social security benefits for farmers and fishermen.

On October 12, date producers from several regions assembled in the capital with the message that private operators have neglected lands and failed to provide employment to local farmers. Dozens of farmers from the governorates of Tunis, Tozeur, and Kebili insisted that the Ministry of Agriculture hold a hearing to address the issues raised by small farmers since 2011.

Strikes and Negotiations: During the second half of 2015, the UGTT and UTICA were unable to settle negotiations concerning an increase in private sector wages. On October 20, hundreds of private sector employees demonstrated in Tunis under the banner of “Work, freedom, dignity” and demanding their right to an increased salary. After a strike in Sfax on November 19, a series of demonstrations that the UGTT had anticipated to take place throughout the country was put on hold due to the November 24 suicide attack.

Law 52: The growing list of activists, rappers, artists, and youth who have been arrested on the grounds of Law 52 since 2011 is startling; according to the Ministry of Justice, 7,451 Tunisians have been arrested for the consumption of cannabis, of which 4,189 are currently serving time in prison. Five are under eighteen years old, 291 are between the ages of eighteen and twenty, 3,672 between twenty and twenty-nine, 2,470 between thirty and thirty-nine, and 1,000 are more than forty years old. In April 2014, the citizen collective Al sajin 52 was created to push for reform of Law 52 which condemns those found guilty to a minimum of one year imprisonment and a fine of 1,000 dinars. In April last year, the Ministry of Justice presented a draft law which aims to “help a large fragment of Tunisian youth who have deviated from the straight path.” On December 30, the law was approved and submitted to parliament.

Law 230: Although Law 230 (which holds that “Sodomy…shall be punished by three years imprisonment“) has yet to be put on the table for parliamentary discussion, the cases of Bouhid Belhadi and Marwen pushed the taboo topic of homosexuality into the arena of public debate in 2015. In May, activist Bouhdid Belhadi announced the creation of the Shams, the country’s first LGBT association. In September, twenty-two year old Marwen was subjected to a rectal examination, and sentenced to a year in prison on the basis of Law 230. When, several days later, Minister of Justice Mohamed Salah Ben Aissa called for the abrogation of the law, President Essebsi not only asserted his opposition to annulling Law 230, but commented that the Minister “only represents himself.” Although recent discussions concerning Law 230 exposed widespread homophobia and political ambivalence around the criminalization of homosexuality, they also opened the debate to a serious examination of the measure as a violation of human dignity and the right to privacy.