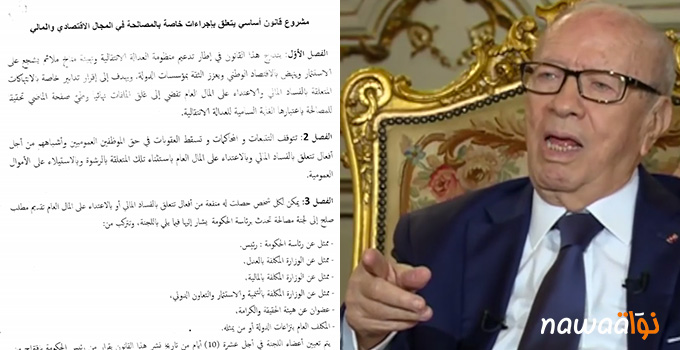 What President Beji Caid Essebsi has advanced as “primordial” in building up Tunisia’s economy, many have decried as a throwback to the unbridled wealth accumulation of a select few with close ties to the Ben Ali family. Back in March, Essebsi alluded to the idea of “economic reconciliation,” and, several months later, the Council of Ministers accordingly adopted Draft Law N°49/2015 prescribing exceptional measures for economic and financial reconciliation. On July 16, the draft was submitted to Parliament.

ARP deputies have yet to examine the text, but on the streets (in some twenty cities across the country between September 8 – 21) and in the media, ordinary citizens, journalists, and public figures have expressed adamant disapproval. Critics of the draft law argue that the adoption of exceptional measures regarding “any person having profited from corruption or having dilapidated public money” (Article 3) would undermine Law N°2013-53 of 24 December 2013 governing transitional justice and the affiliated authority, the Truth and Dignity Commission (IVD). On the other side of the spectrum, proponents of the draft law have accused IVD President Sihem Ben Sedrine of corruption. Others have called out the Commission’s inefficiency attending to cases of crimes committed under the former regime. The violations in these cases are related to financial corruption and the diversion of public funds which are listed under Article 8 of Law N°2013-53. Those who bemoan a drawn-out transitional justice process claim that the prolonged exclusion of formerly productive entrepreneurs from business and trade has deprived the economically-burdened country of vital productivity and investment opportunities.

Steps and strategies for economic growth
While, at home and abroad, Essebsi advances economic reconciliation as the primary initiative to spur local and overseas investments, others have focused on multi-faceted strategies and approaches to stimulate economic growth. In March, FEMISE (Forum Euroméditerranéen des Instituts de Sciences Economiques) published a 469-page study, led in part by Chedly Ayari of the Central Bank (BCT), which details Elements for a Strategic Social and Economic Development. Last week at the UN General Assembly in New York, Prime Minister Habib Essid outlined the government’s 5-year economic and security plan. In the meantime, two of the most well-established international proponents of a free-market, growth-based vision, the International Monetary Fund (IMF) and the World Bank, have solidified their enduring support for Tunisia’s economic development through the disbursement of grants and loans not, of course, without the compulsory evaluation and contingencies that accompany such funding. 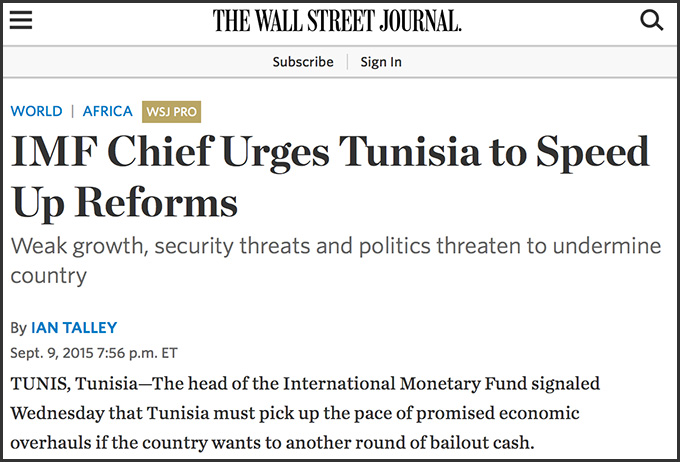 We need to take into account the social circumstances … If the IMF doesn’t take this into account, we will not succeed, and there will be more turmoil. Houcine Abassi of the Tunisian General Labor Union (UGTT) quoted in IMF Chief Urges Tunisia to Speed Up Reforms, The Wall Street Journal, 9 September 2015.

Two weeks before the IMF executive board approved the immediate disbursement of 301.6 million USD as the sixth installment of its two-year Stand-By Agreement with Tunisia, Managing Director Christine Lagarde convened with a number of leaders and government representatives to discuss the context and objectives of economic reforms. Citing a youth unemployment rate of 34% and regional disparities which represent the crux of the country’s economic burdens, Lagarde posited that the projected one percent growth rate for 2015 will be insufficient to respond to the disproportionately high demand for jobs and the aspiration for inclusive growth.

“Fortunately,” Lagarde explained before her audience at the Central Bank in Tunis, “…the Constitution obligates the government to effectively manage public resources, and serve its citizens and public interests with clear transparency and accountability rules.” Later in her address she noted that “More effort is needed to overcome the vestiges of the old model, which was a key constraint to growth.” 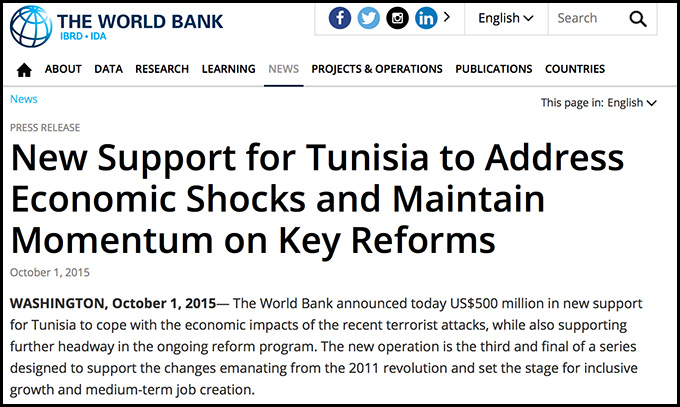 At the beginning of the month, the World Bank announced the third and final installment in a series of Governance, Opportunity and Jobs Development Policy Loans. This “new support” to the tune of 500 million USD supplements the 10 loans and 12 grants that the Bank has already invested and disbursed in the form of technical assistance to Tunisia.

Controversial as financial assistance from such loan-granting institutions certainly is, inarguable is the depth, breadth, and quality of studies prepared by researchers and economists at these organizations. This much has been clear across discussions concerning Draft Law N°49/2015 where numerous articles evoke figures and findings from reports prepared since the departure of Ben Ali in 2010. Widely referenced in this context is the World Bank’s All in the Family: State Capture in Tunisia which quantifies the economic corruption that was endemic under the former regime, as well as The Unfinished Revolution which dissects the economic crisis and prescribes the reforms necessary to bring “opportunity, good jobs and greater wealth to all Tunisians.”

The simultaneous announcements of IMF and World Bank renewed support for Tunisia plus their growing stock of data and analysis pertaining to the country’s economic and political spheres prompted Nawaat to consult these institutions for an evaluation of the polemical proposal for economic reconciliation. Though the IMF did not respond, the World Bank at once acknowledged receipt of our questions, which were as follows:

1 Generally speaking, how relevant to/potentially effective for economic growth is the proposed law? What are the pros and/or cons of such a measure?

2 How does the draft law align with or deviate from the World Bank’s objectives for Tunisia, in particular (and as mentioned in the World Bank press release from October 1) “inclusive growth,” “government accountability,” and “the levelling of the economic playing field”?

3 Given widespread public disapproval of the proposal (specifically via the campaign Manich Msamah), might “entrenching citizen voice and participation as essential ingredients of policy making” in this case be reason enough for the proposed measure to be wholly dismissed, or are its potential gains for the Tunisian economy significant enough that it is worth passing through (perhaps with certain revisions to diminish its perceived negative implications)?

How countries in transition cope with the past is a matter for societies to decide for themselves, and in this instance it is for Tunisians to resolve among themselves. Looking forward, however, our global experience is that sustainable and inclusive growth depends on a level economic playing field, and a relationship of trust and mutual accountability between citizens and governments. A level playing field requires transparent and predictable regulations, that guarantee equal access and treatment for all businesses, and public trust depends on effective delivery of basic services, and access to public information that allows citizens to make informed decisions and hold government to account. We have conducted extensive research on the impact of anti-competitive practices during the Ben-Ali era. We are now firmly committed to supporting the reform program as the critical path to laying the foundations of a new economic model that is both fair and open to all Tunisians, and creating institutions that are transparent and accountable to citizens. William Stebbins, Senior Communications Officer, Middle East and North Africa Region, World Bank.

Although the Bank has abstained from providing a specific evaluation or analysis of the text as we had hoped, and although the response is arguably open to interpretation regarding economic reconciliation, the themes iterated here—level economic playing field, trust and accountability, transparent and predictable regulations, equal access and treatment, access to public information—are the apparent antithesis of the presidency’s proposed “exceptional measures” to absolve “any person having profited from corruption or having dilapidated public money.” Even here and in general the discourse of the world’s greatest advocates of free-market economic growth, one is hard pressed to identify substantial economic merit associated with Draft Law N°49/2015. Indeed, the President’s incorrigible faith in reconciliation as key for economic growth appears less founded in a comprehensive economic strategy than a political one.

Would granting amnesty to these individuals (identified in Article 3 of Draft Law N°49/2015) translate into a healthy “levelling of the playing field” by broadening the spectrum of the country’s entrepreneurs and investors, and/or would it represent the same sort of preferential treatment afforded a small category of individuals and businesses that thrived under the Ben Ali regime?

Upon receipt of Mr. Stebbins’ response, we submitted this final question to our World Bank correspondent, a last attempt to draw out some sort of convincing economic justification for the draft law awaiting parliamentary review. Our inquiry remains unanswered, and, in hindsight, might very well be rhetorical enough to abandon.