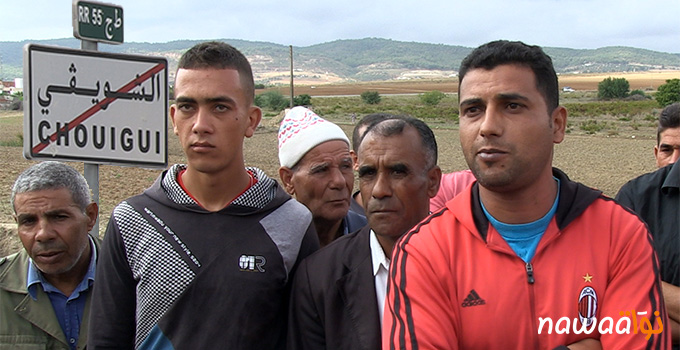 Update: On 30 October, the sixteen herdsmen accused of damaging property were fined 100 dinars each by the court of first instance in Tebourba (Manouba). Defense lawyer Sawssen Hammami stated that her clients have appealed as they await the hearing date.

«Since Bellamine arrived, Chouigui is falling apart». With these words, we were received by dozens of residents in Chouigui (delegation of Tebourba, goverenorate of Manouba).

Land operator Faouzi Bellamine filed a complaint against the inhabitants of the village accusing them of having damaged his crop harvest. Chouigui inhabitants, on the other hand, accuse Bellamine of poor management and of having betrayed promises to provide employment. The affair recalls other conflicts between farmers and private investors stemming from their management of State-owned lands. In 2011, the inhabitants of Chouigui filed a request with authorities to retrocede the lands exploited by Mahmoud Bellamine and his sons since 1991. But «the State did not follow up», explained one resident.

Prosecutions against the herdsmen

The last complaint filed against the inhabitants of Chouigui is but the tip of the iceberg. Bellamine accuses the village’s herdsmen of having damaged his wheat and grape crops. Defense lawyer Sawssen Hammami says that the sixteen herdsmen appeared before the justice for «property damage», a charge dating from the French colonization.

Faouzi Bellamine assures that the damages caused by the herdsmen forced him to uproot a good portion of his grapevines. The herdsmen deny the accusation and explain that Bellamine simply wishes to convert the vineyard to cultivate grains, which would require less manual labor. Hedi Ayari, one of the accused herdsmen, denies Bellamine’s version, indicating that pasture for animals covers several parcels of land as per the consent of all Chouigui’s farmers, including Bellamine. He further points out that grazing on cultivated land is limited to the period following harvest season. Workers at Bellamine’s farm, however, confirm the damages caused by herdsmen.

Beginning of conflict: the dismantling of the cooperative

The beginning of the affair dates back to the beginning of the 90’s when the State ceded the last cooperatives to investors. On 3 December 1990, the general assembly of Chouigui’s agricultural cooperative ceded the cooperative lands (1,000 hectares) to the Office of State-Owned Lands (OTD). The land was divided into two parts: the first (320 hectares) was split between 61 cooperative members, each of whom received about four to five hectares. 27 members retired and did not receive any land. The remaining 670 hectares were disbursed to Chouigui’s company for the promotion of agricultural development (SMVDA) owned by Mahmoud Bellamine and his sons.

Although Faouzi Bellamine, CEO of the company, assures that the division of land took place with everyone’s consent, the last president of the cooperative Hédi Ben Khalaf says that the division was born under political pressures. He explains that Larbi Khalii, ex-delegate of Tebourba, and Hamadi Sdiri, president of the local chapter of RCD (Ben Ali’s ruling party), had threatened him with imprisonment.

Some villagers appear nostalgic for the era of the cooperative. «The cooperative employed some 150 workers. 60 were permanent and received social benefits», said Ridha Azzabi, activist and son of a former member of the cooperative. Azzabi added that «the children of agricultural workers were accounted for in and outside of school, including the organization of excursions and trips abroad». The cooperative also provided inhabitants with a car and driver to transport people to the hospital or to the city.

According to villagers, the dissolution of the cooperative—under the pretext of bankruptcy—was intended to enable the Bellamines, a notable family from the capital, to take over the lands. Inhabitants accuse the cooperative’s administrative team during the last few years of poor management. Others place the responsibility on the Justice-mandated liquidator.

Several former cooperative members say they tried to purchase the lands by paying a portion of the price to the State. But the authorities retracted and sold the land to the private operator. On 1 June 1988, cooperative members filed a complaint (below) against the Office of State-Owned Lands for having halted sales procedures. Inhabitants insisted that they be reimbursed for the sums paid for the land or that sales procedures be completed. 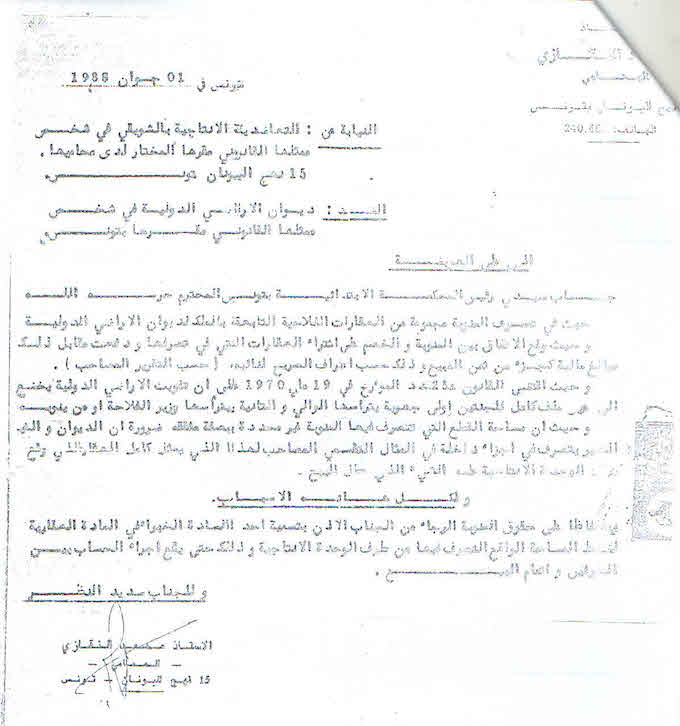 The dismantling of the cooperative divided villagers into two categories: 61 former members who exploit small parcels of land, and the retired members who receive meager pensions. The children of the latter group display the greatest discontentment of Chouigui’s residents.

It wasn’t until recently that villagers succeeded in surpassing this cleavage. Now they are united in their demand for the departure of the private investor and equal repartition of the land. Ridha Azzabi

Small land operators affirm that they are the victims of a «State-orchestrated scam». According to these individuals, the State took advantage of their illiteracy to make them believe that they were owners before informing them that they had signed tenant farming contracts. These operating leases ended in 2008. Conditions for small-scale operators have continued to deteriorate since. The beginning of each season has become more difficult since banks refuse to grant these operators loans to purchase material, seeds, and fertilizer. At the same time, many farmers cannot help but compare their daily efforts to maintain their little plots of land and «the state of abandon of the vast lands at the disposal of the Bellamines». For the latter, the difference lies in the nature of agricultural operations, extensive in their case and (smaller-scale) vegetable-growing for former cooperative members.

The question of unemployment is at the heart of the conflict in Chouigui. Villagers accuse Bellamine of «betraying his promises of employment since he obtained the land». The investor defends himself explaining that his business does not require a large number of workers thanks to mechanization. He adds that the evolution of agricultural techniques requires «qualified farmers and not simple workers using traditional methods». Villagers claim that Bellamine employs only four workers to maintain 670 hectares of land, while the latter maintains that he employs nearly 15 permanent workers. Nawaat has yet to receive the promised proof of these employees.

An employee from the farm indicates that there are five workers: one driver and four security guards, three of whom work at the new wheat granary that Bellamine built in partnership with the national Grain Board. According to the same source, these three are paid by Rose Blanche, the pasta manufacturer that rents the granary. Expressing his desire to remain anonymous, the farmworker speaks of Bellamine’s poor management practices. He mentions that workers’ salaries are disbursed ten to twenty days late. One of the farm’s security guards, Neji Fatnassi, says that salaries vary between 360 and 460 dinars per month for 12 hours of work per day.

A report from 18 March 1991 sent by the former delegate of Tebourba to the regional authorities explains the procedure for dismantling the cooperative and the repartition of lands amongst the «beneficiaries of the exploiting company». Among the most important points of the report are the investor’s promises of employment for «the children of former cooperative members and unemployed youth of the village».

Bellamine does not hesitate to accuse Chouigui youth of «laziness». He holds that their refusal to work during olive-picking season forces him «to employ female workers from neighboring regions». Sarcastic, the youth respond that their refusal to work is owing to the miserable salaries proposed by the investor. Doctor and researcher in social and political geography, Habib Ayeb explains that capitalist farmers prefer to employ women:

This is not because they are more competent than men but because the precarity [of their situations] compels them to accept low salaries to subsidize their families’ needs.

We recall that Tunisian legislation annulled segregation in the SMAG (guaranteed minimum agricultural wage). Ayeb further indicates that female farmworkers are the victims of sexual violence carried out by «the intermediaries who supply this underpaid manual labor to large agricultural operators».

Villagers affirm that a decision dating from 2004 annulled the exploitation contract of the Chouigui farm (according to which the farm is operational until 2030), but they believe that Bellamine succeeded in suspending the execution of this decision owing to his connections with individuals in positions of power.

While Faouzi Bellamine denies the existence of any such decision, Faez Msalem, the regional delegate for agricultural development in Manouba, explains that since 1999, the State has pursued a case against the investor for not respecting contract specifications for the land. According to Msalem, the State won the case in the court of first instance but lost in the court of appeals; a reconciliation meeting took place in 2004. The delegate has provided evidence that the investor does not respect the contract specifications. Indeed, periodical follow-up reports show that the «olive grove is neglected and the fishermen who are part of the exploitation plan are nonexistent. Moreover, the investor never cultivated the 360 hectares dedicated to non-irrigated cultivation», explains the official before concluding that the regional delegation considers Bellamine’s company to be «a lost cause».

In spite of our efforts, Nawaat has been unable to consult the contract specifications and the investor’s exploitation contract. Abdeljellil Belhassen, member of the restructuration committee of State-owned lands in the Ministry of Agriculture, has declined to respond to our requests for information.

Leaving Chouigui, the contrast is remarkable between the vast green fields and the poverty that marks the faces of inhabitants. Questions evoked by Habib Ayeb resonate in the face of this conflict: