On November 15, Minister of Culture Hayet Guettat Guermezi paid a visit to the fair. Past visits by Culture Ministers to the fair don’t normally generate much media attention, Guermezi’s did. According to eyewitnesses who later spoke to Meshkal/Nawaat, Guermazi came in from the back door escorted by an armed, antiterrorism brigade (BAT) of the police forces, as well as police dogs in a scene that many described as “uncalled for” and “reminiscent of the old regime.” Their team then confiscated books at an Egyptian publisher’s stand published by Ennahdha leader and speaker of the now-suspended Parliament Rached Ghannouchi, according to Oussema Dhahri, a student and manager of a Tunisian publishing house’s stand at the fair. 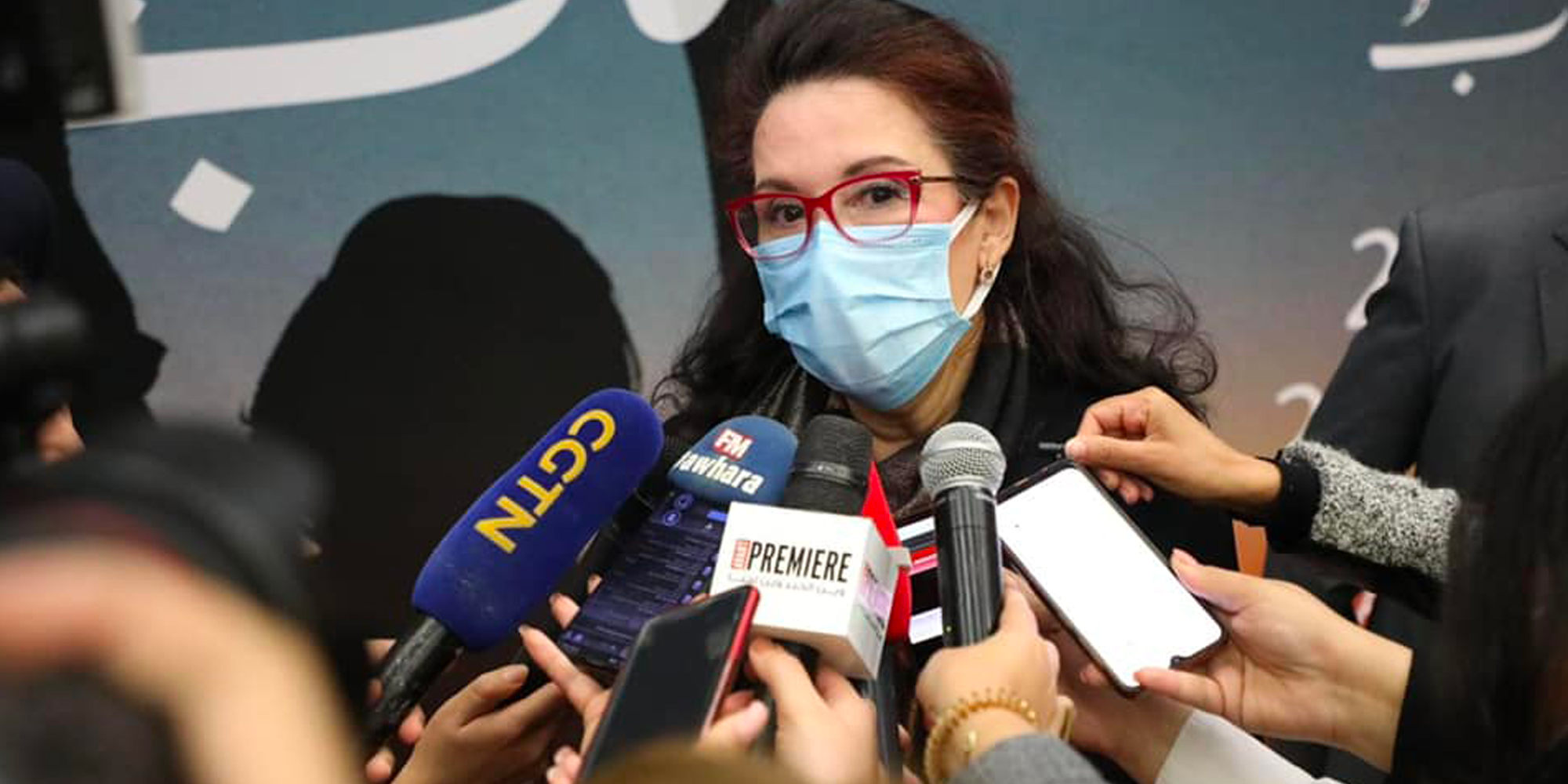 Minister of Culture Hayet Guettat Guermezi at the Book Fair

Dhahri, who shared the news in a post made on his personal Facebook account, said that in addition to Minister of Culture’s security performance, which he described as “scene that reminds us of Hollywood crime movies,’” Minister Guermazi came across Egyptian publishing house “A” and ordered her accompanying security personnel to confiscate a book written about Ennahdha leader, Rached Ghannouchi, and published prior to 2011, screaming at the publisher to “take these books to Sisi.”

Egyptian President Abdelfatah Sisi took power in a coup in July 2013 against President Mohamed Morsy of the Muslim Brotherhood–ideologically similar to Tunisia’s Ennahdha party. Sisi’s forces then massacred over a thousand of Morsy’s supporters.

According to Dhahri, after Guermazi’s inspection, police forces stormed the Egyptian bookseller’s stand and confiscated the books – entitled , prompting awe from bystanders and the publisher himself who reportedly responded: “You did not catch me with drugs, these are just books,” according to Dhahri’s account.

On November 20, Meshkal/Nawaat visited the book fair and confirmed these accounts after talking to several witnesses, all of whom asked to remain anonymous. The majority of people at the Egyptian publishing stands refused to give a statement on the record for fear of retaliation and due to the potential impact on their work at the fair. However, we were able to identify the publishing house that had its books searched and confiscated, according to some Tunisian eye witnesses who were on scene. 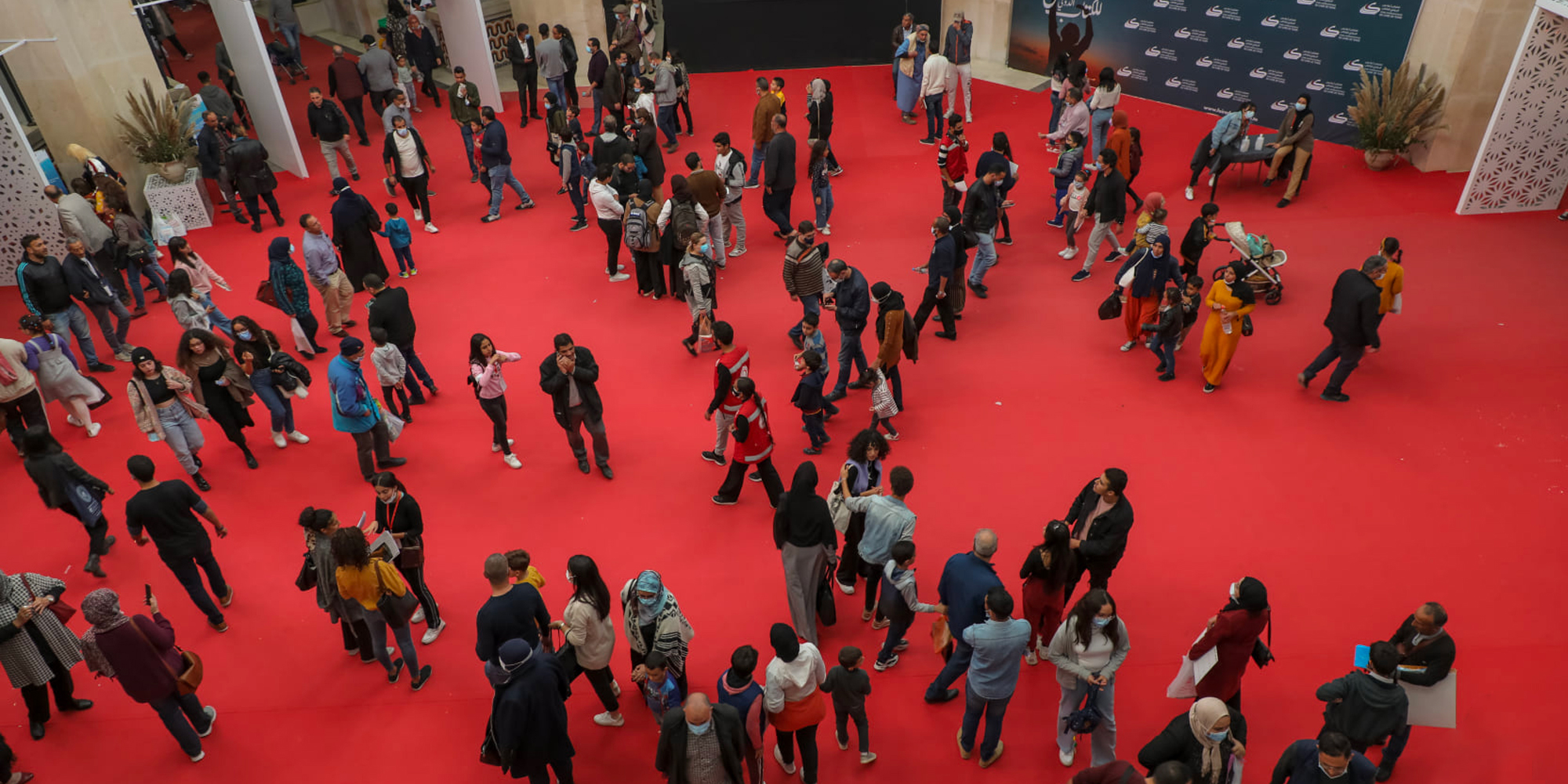 Dhahri told Meshkal/Nawaat that other Egyptian publishers told him that the publisher from publishing house “A” remained under investigation that day until 21:00 and police went through his whole book stock to verify its content.

“They kept verifying their books and the titles until 9 p.m, and [booksellers] were even threatened to have their stands at the fair permanently shut down… It was only after some begging that they were allowed to continue their work,” Dhahri stated.

“They treated them with lots of violence and such behavior is over the top…Even when I publicly shared that post, Egyptian friends here asked me not to mention their names, because there is a political calculation and there is Sisi in Egypt,” Dhahri said, explaining why some Egyptian publishers were hesitant to share their statements with Meshkal/Nawaat. Egypt’s military dictatorship under Abdelfatah Sisi has brutally repressed even mild critics in recent years.

Meshkal/Nawaat was able to identify the Egyptian publishing house in question. However, the alleged victim of the incident at publishing house “A” completely denied the accounts made by some other Tunisian and even non-Tunisian publishers at the fair. “The issue was blown out of proportion. We do not want to cause any ‘Fetna’ [i.e. sectarian strife]…The issue was only about the table that blocked her [Minister of Culture Hayet Guetatt Guermezi] way and there is no such thing such as Ghannouchi books being confiscated,” the person at publishing stand “A” said.

Meshkal/Nawaat’s journalist was also verbally harassed for investigating the accounts on our visit to the book fair. “Why are you digging into this? Are you pro-Ennahdha? All Islamist books should not be allowed here [in the book fair],” one publishing stand operator said on November 20 while Meshkal/Nawaat was investigating.

However, most witnesses at the fair that Meshkal/Nawaat spoke with expressed anger and shock at the way the Minister of Culture and her police had behaved. “Some publishers who have been working for 30 years sat down to talk about the history of restrictions they faced throughout the years. They really believed that this behavior was over the top,” Dhahri, said, summarizing the general feedback at the fair regarding the incident.

Ahmed, who declined to give his real name because of security concerns and fear of retaliation when he goes back to Egypt, told Meshkal/Nawaat that authorities aimed their harassment towards Islamist book publishers.

“This occasion is supposed to be about celebrating freedom of thought and allowing people to make a choice. These practices do not align with such principles,” Ahmed told Meshkal/Nawaat. He denounced the censorship and claimed that all of the Egyptian publications that participated at the Tunis International Book Fair are not even prohibited by the Egyptian authorities, despite the military dictatorship there that has brutally repressed Islamists.

“These books get authorized for printing in Egypt. Not a single book is allowed to be printed without the authorities’ approval…So [the crackdown] is pointless; this paves the way for more extremism and fanaticism,” Ahmed said.

“From what I heard, the books they confiscated are not books that incite to violence or terrorism,” Refka, a worker at a Tunisian religious books publishing stand at the fair told Meshkal/Nawaat. “These actions cannot be justified in a country of liberties and rights…This is an indication that we are back to harassment and old practices that should not be tolerated today…But no matter what happens, they will not be able to take us back in time,” Refka added. According to her, censorship mainly targeted Islamist publications and religious literature including books by Rached Ghannouchi and Abdelhamid Kochk. 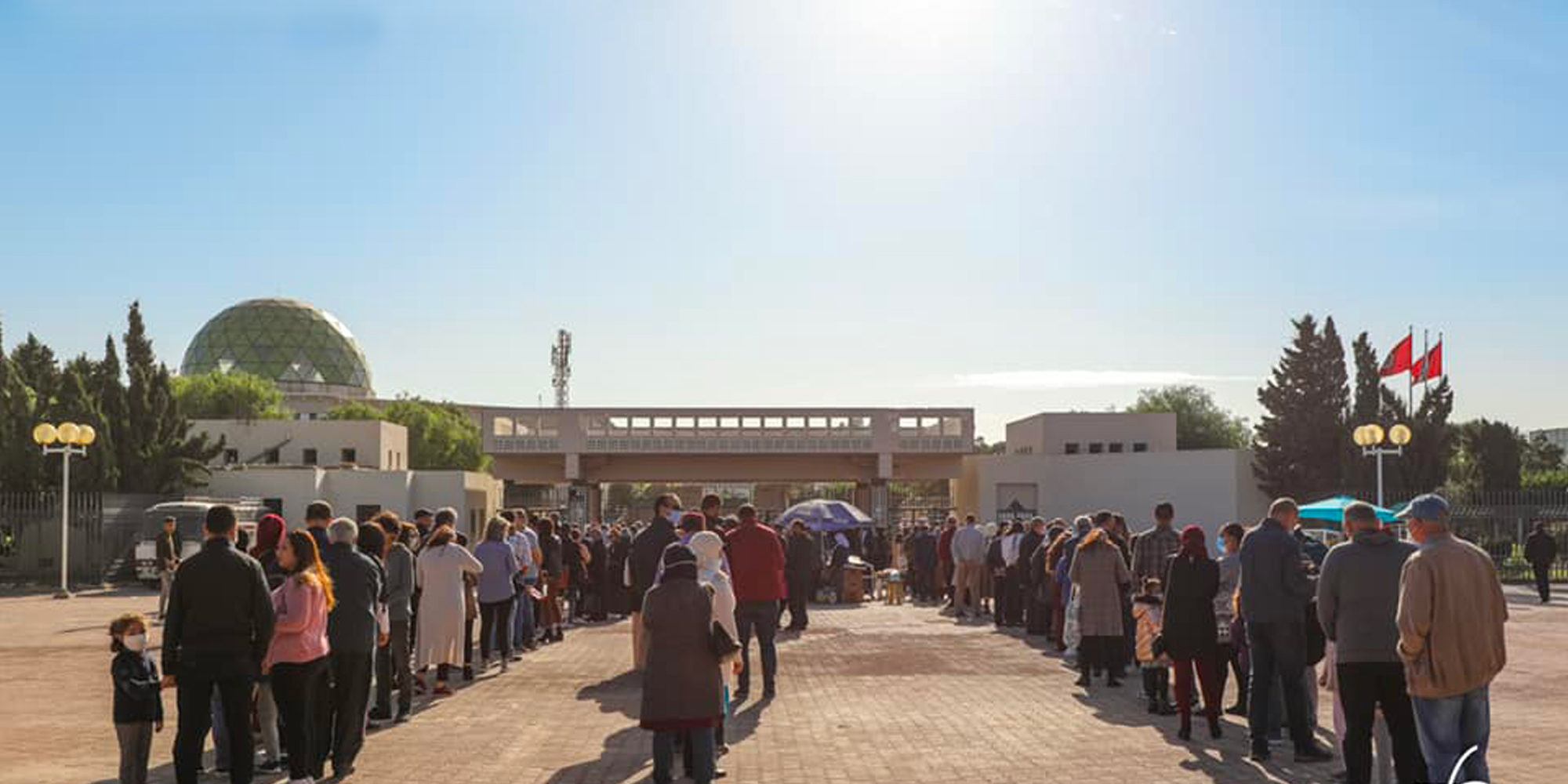 In a statement made on private Tunisian radio Express FM, the Tunis International Fair Director, Mabrouk Manai, denied all censorship allegations and described the accounts made on social media as “hasty and invalid.”

Manai also stated that the book by author Mejdi Abdel Maati “Rached Ghanouchi and the Islamic Ennahdha in Tunisia,” published in 2011, was not confiscated, underlining that “the Directorate General of the book fair guarantees the respect for freedom of expression and does not allow this kind of overreach.”

“[Islamist preacher] Yusuf Qaradawi books were not listed, that’s true, but other books by Rached Ghannouchi and [Islamist preacher] Abdelhamid Kichk were indeed listed by the publishers before the beginning of the fair but still got confiscated,” said Dhahri, contradicting the denial given by fair director Manai.

Meshkal/Nawaat was unable to meet with Mabrouk Manai for further explanation of the accounts we heard from several people, both on and off the record. However, an administrator at the Tunis International Book Fair, who spoke on condition of remaining anonymous, told Meshkal/Nawaat that the visit and “the show” made by the Tunisian Minister of Culture, was internally denounced by the administration as going too far.

Even before the fair launched, there were signs of old regime practices. On November 1, the fair’s official Facebook page published the event’s official poster, which read:  “The International Tunis Book Fair, Under the Supreme Supervision of Mr. President of the Republic, Professor Kais Saied.” The obsequious tone towards the president instantly generated controversy and received backlash online from those who saw it as a reminder of the past dictatorship. The Ben Ali regime, which cultivated a cult of personality, often used cultural events as a tool of propaganda to polish the system’s image and distract public opinion from its abuses.

“The lord Kais Saied,” one commenter wrote sarcastically on the Facebook page. “Anniversary of the Blessed Transition, didn’t books teach you to be free and liberate your minds?” read another comment, referring to Ben Ali’s term for the coup he made against Bourguiba on November 7, 1987 which brought him to power. “Much dictatorship fun under the high supervision of his highness, our great lord,” another read.

Another scene that raised eyebrows was a stand for one of the police unions which offered their pro-police children’s magazine. While the Ministries of Interior and Defense have participated in the book fair before, this year the exhibition had some weapons, and Meshkal/Nawaat observed police at the stand letting children take pictures with mannequins holding Kalashnikov rifles. Two people at the fair said they felt it was an attempt to whitewash police unions, who have incited violence against citizens on multiple occasions. 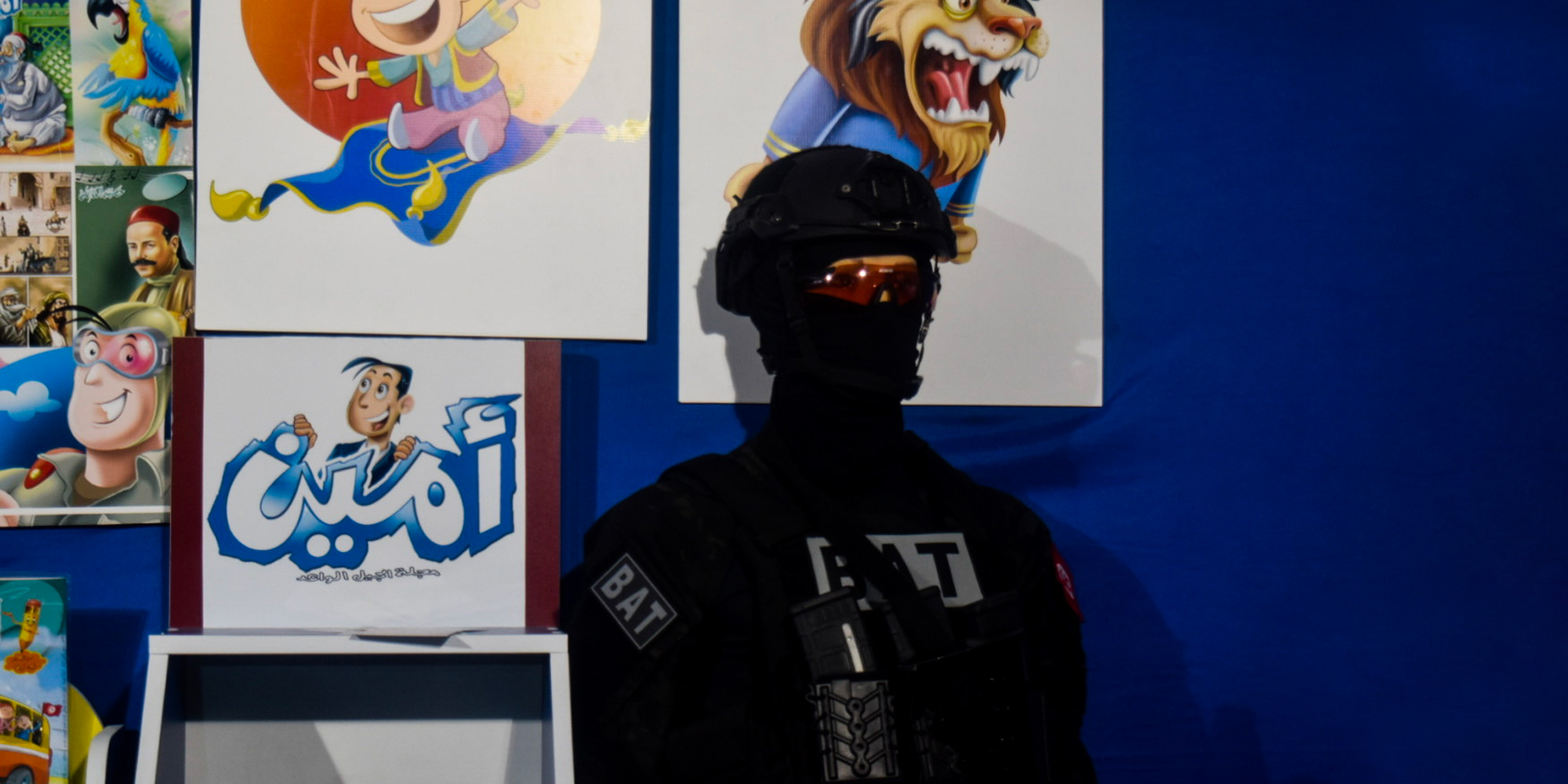 “They allege that they are trying to create a new anti-terrorism generation, but all they’re doing everyday is parading in their uniforms, with balaclavas on their faces, carrying their weapons and even with motorcycles and police dogs,” Oussema Dhahri told Meshkal/Nawaat, referring to the police union presence at the book fair.

While police had stands in the fair, Tunisian writer Najib Bouzayen was selling his own books for five dinars on the sidewalk outside the Kram Exhibition Palace because only larger publishers had been given stands. He had a sign beside his books that read “Tunisian writer, I sell my books to live.”