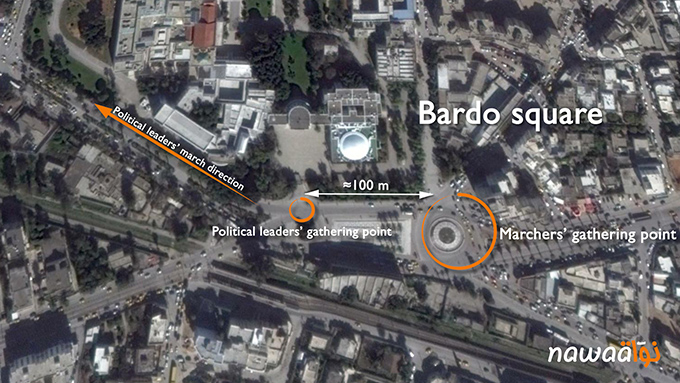 «We know that this is a battle not just of hardware, but also of hearts and minds», wrote Tunisian Minister for Development, Investment, and International Cooperation Yassine Brahim to the Wall Street Journal. «Equally costly, however, is the damage to our country’s reputation. The inevitable media headlines of “Terror in Tunisia” leaves little room for nuance.» Indeed, minimal nuance is among the milder of offenses that appear under similar titles describing the attack in Bardo on March 18— «It’s Over for Tunisia, It’s Over for Tourism» (Libération), «Terrorists’ Victory» (Le Point), «Bloodshed in Tunisia» (The New York Times), «Carnage at the Bardo Museum» (in print, Le Temps). With tones of alarmism and pessimism that have contributed to the banalization of violence and terrorism,1 mainstream news coverage of recent events in Tunisia has been a reliable source for one-dimensional, contrived, and sometimes fabricated information. Given mainstream Western media’s portfolio of news reports on Tunisia since 2011 and also in light of the country’s constitutional guarantee for a pluralistic and fair media,2 it is regrettable as seems to be the case in the days and weeks that have followed the attack that foreign press should be granted more access to events of public interest in the capital than many local, independent media outlets.

CNN Discerns “a pattern of attacks across the region” 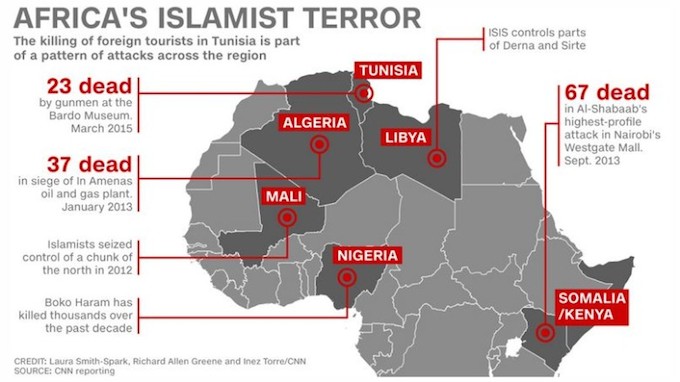 The most creative and foreseeable perversions of “news reporting” to have materialized over the past several weeks was CNN’s rendering of terrorism in Tunisia. Less than a week after the attack and the ensuing flurry of apocalyptic news headlines, CNN declared: «Tunisian town near ‘Star Wars’ backdrop now features in battle against ISIS». The Breaking News report announced that Tataouine «now finds itself part of a real conflict, as a way-station for jihadists crossing the Libyan border». A map entitled, “Africa’s Islamist Terror”, highlights Tunisia, Algeria, Libya, Mali, Nigeria, and Kenya to illustrate that «the killing of foreign tourists in Tunisia is a part of a pattern of attacks across the region». The graphic, which incorrectly cites «23 dead by gunmen at the Bardo Museum», is credited to Laura Smith-Spark, Richard Allen Greene, and Inez Torre for CNN reporting. We recall that Greene and Torre are the authors of a previous article, “Syria’s Foreign Jihadis: Where do they come from?” which was offensively imprecise and assumption-based and which nonetheless inspired and was the primary reference cited in articles published by several Tunisian media outlets. Similarly, a number of international mainstream news agencies as well as a handful of lesser-known outlets directly cited the recent CNN report and feature their own creative variations of the original headline. 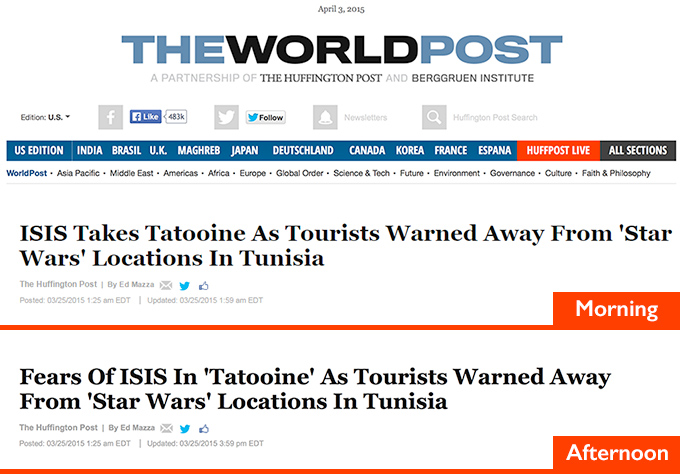 Between early morning and late afternoon on March 25, The Huffington Post revised its inaccurate original headline.

In the last year of Tunisia’s transition period, campaigns leading up to the election of the first full-term post-revolution government epitomized the collusion of media and politics. In 2014, State authorities responsible for the regulation and oversight of elections —ISIE— and of the media —HAICA— were perceived to be implicated in rather than to have a handle on the politicization of the media; mainstream news agencies served as tools for political marketing; the guarantee of a pluralistic and fair media remained a concept as opposed to reality. Under President Ben Ali, national media was reputably instrumentalized to maintain the image of a “secular, modern, and democratic” State. Whereas the dissipation of the former regime and its grasp on the media have allowed room for freedom of expression and a more diversified media landscape, national media remains ever-loyal to the country’s political elite. Meanwhile, international press agencies have poured onto the scene. Much in the way that political figures and trade organisms with a free-market vision have sought to open the country to unrestricted foreign investment, ministries and government representatives have opened museum and parliament doors to mainstream and foreign press. The administration and organization of public and press access to events and information since the attack seem to have favored international media and simultaneously excluded the citizenry and independent media.

‘The Exclusion of Journalists or the Return of State Press’1

At ten o’clock on the morning of March 24, Tunisians lined up against the fence outside the entrance of the Bardo Museum in anticipation of the official re-opening that had been announced by the Ministry of Culture. Waiting in the rain holding posters, flags, and umbrellas, youth, artists, journalists, and tourists were in fact not ushered inside but informed that the present event was for invitees only and that the public opening would be at a later date. A statement posted by the Ministry at 11:17am specified that the re-opening was for «invited individuals, political and cultural figures, and certain civil society representatives». Frustrated and disappointed, people expressed their disdain on Facebook and Twitter. Leaving the Museum, one journalist told Nawaat:

We Tunisians are always kept outside. Foreign press was able to enter without even having passes. As for us, we were told to return for the official ceremony at 2:30pm. What is worse, some of my Tunisian colleagues were able to enter without passes as well, and, by coincidence, they work for media that don’t make waves or go against the grain.

Tunisian journalists not permitted into the Bardo Museum @RadioMosaiqueFM

On Sunday, 29 March, Tunisia prepares “its own” national march. A sort of contingent effect of globalization, the concept has manifested on both sides of the Mediterranean. Misguided, the new Tunisian leadership has followed suit in the division of two distinct marches: one for those in power, and one for the people. Seif Soudani, Terrorism: The Best Marches Are the Shortest 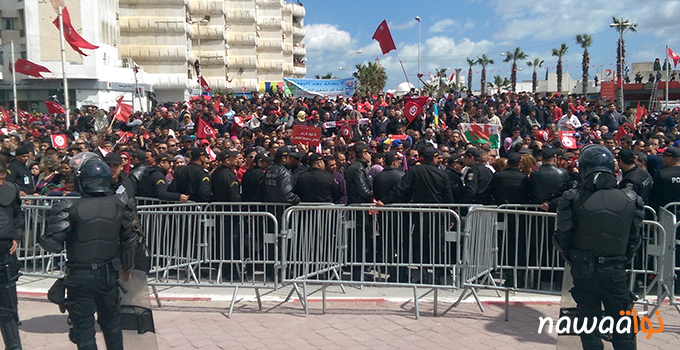 An even grander display of exclusion took place over this past weekend when «world leaders joined tens of thousands of Tunisians» in a march against terrorism. Late Sunday morning, beneath a sign that read “Bardo Against Terrorism” at the second of two great gates outside of Parliament emerged an intermittent flow of international leaders and political figures. By early afternoon, President Beji Caid Essebsi and his entourage of foreign officials had emerged but were imperceptible at the center of the mass of cameramen and security guards that surrounded them. From the thick row of journalists and photographers pressed against the barrier outside parliament gates,3 it was impossible to catch a glimpse of Essebsi, Hollande, Abbas, Bongo, Renzi, or Sellal though they were but a few meters away. The President could not however have been more removed from the popular march as his caravan of political leaders turned in the direction opposite the sea of marchers contained one hundred meters away by a dam of policemen. The most remarkable feature of last weekend’s ‘solidarity march’ was the clear separation of political figures from citizens and local press.

Inevitably, media outlets have lobbies, stories have multiple versions, news reports are not objective. In theory, the promotion of a pluralistic and fair media minimizes the frequency in which the quality of reporting, research, synthesis is diminished or subordinated by objectives apart from or contrary to the diffusion of pertinent, accurate information. The quality of what has been produced by mainstream media in the days and weeks following the attack in Bardo has evidently been compromised by politicization; indeed, the nuance and substance of mainstream reports about the attack have been about as worthy of contemplation as the Internet’s preponderance of Selfies. That ‘Star Wars’ is a principle feature of discussions about terrorism is regrettable. That the same press agencies who render news into the stuff of movies should be afforded access to events of public interest over local independent media is indicative of a media landscape overgrown with and stifled by economic and political interests; distant as the country’s leadership is from the citizenry it as far from honoring ideals associated with access to information as laid out in the constitution.

2. Article 127 of the Constitution of the Tunisian Republic describes the role of Tunisia’s media regulatory authority: “The Audio-Visual Communication Commission shall oversee the modulation and development of the audio-visual communication sector and seek to guarantee freedoms of expression and of the media and the existence of pluralistic and fair media.”

3. In spite of having obtained press badges issued by the Presidency of the Government, the Nawaat crew and journalists of other Tunisian media outlets were directed to the area outside Parliament Gates. One journalist was particularly vocal in her disdain for the coordination of press access which appeared to have designated the majority of foreign press inside Parliament while Tunisian press remained outside. When, after the event, Nawaat contacted the Presidency of the Government to inquire about the organization of press access, we were directed to address the Assembly of the Representatives of the People (ARP) who denied that there had been any categorical segregation of foreign and local press and explained that those who had received authorization to enter into the building were specifically cameramen and photographers.