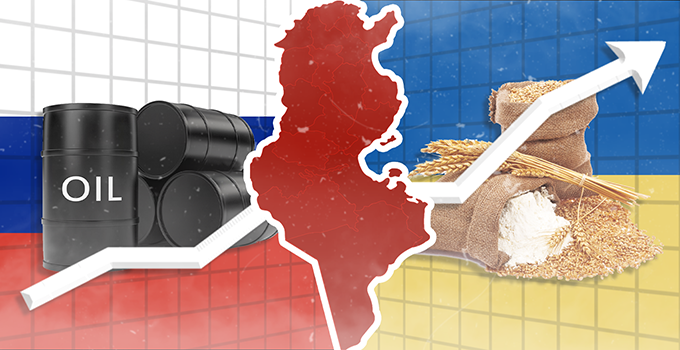 The world waits with bated breath as war unfolds between Russia and Ukraine. At sunrise on February 24, 2022, Russian troops rolled onto Ukrainian soil, signaling the emergence of a new world order. Repercussions will be political and economical, jeopardizing fragile energy balances and the food security of many nations. The crisis comes just as countries had set their sights on a gradual return to economic growth following two and half years of stagnation caused by the Covid-19 pandemic.

When, on February 20, Russian president Vladimir Putin announced his intention to invade Ukraine, economic indicators reflected worldwide panic. International stock exchanges wavered: in Hong Kong, the Hang Seng index fell by 3.2%, New York’s Dow Jones dropped 1.5%, and Paris’ CAC 40 went down 3%. Heavily dependent upon Ukraine and Russia for its provisions of wheat, Tunisia will not be spared from the shock. Indeed, the impact will be felt at many levels.

Tunisia and Ukraine established diplomatic relations under the framework of a memorandum signed in Kiev on June 24, 1992. In recent years, the development and diversification of ties between the two countries has been remarkable. An agreement signed in Tunis on December 7, 1993 set up a joint intergovernmental commission on economic cooperation in commerce, science and technology. In 2016, the two countries adopted a series of cooperation agreements which granted automatic equivalency for Ukrainian diplomas in the sciences (with the exception of medicine). Application procedures were simplified for Tunisians requesting a Ukrainian visa. A direct flight connecting Tunis and Kiev opened on April 26, 2016, encouraging the flow of tourists in both directions. Some 11,000 Ukrainian tourists visited Tunisia in 2016, and more than double that number, 23,000, arrived in 2017. The same year, Ukrainian car manufacturer Ukravauto opened a factory in Tunisia.

Bilateral relations expanded to the banking sector in 2019 with the signing of a memorandum of understanding between the National Bank of Ukraine and Tunisia’s Central Bank. The objective was to develop a framework for cooperation and knowledge sharing around monetary policy, foreign exchange controls and communication. Central Bank governor Marouane El Abassi signed the agreement in Kiev on September 5, 2019.

In February 2021, a meeting between former defense minister Ibrahim Bertagi and Ukraine’s ambassador to Tunis laid the groundwork for military cooperation. The focus was on development and training, particularly in the area of medicine. On another front, efforts were made to introduce Tunisian products to the Ukrainian market through an exhibition organized by the Tunisian Federation of Craftsmen and Small-Medium Businesses. The fair showcasing Tunisian products was held in Kiev from October 26 – November 3, 2021.

The war waged by Russia will not be without consequences for Tunisia-Ukraine bilateral ties, and  will certainly have an effect on Tunisia’s grain supplies. Tunisia depends on the Russian and Ukrainian markets for 80% of its grain imports, and 60% of its wheat supply (the latter coming primarily from Ukraine). In 2021, Tunisia imported 984 million tons of Ukrainian wheat and 111 million tons of Russian wheat.

Tunisia’s reliance on grain imports will only grow in 2022 due to drought, the effects of climate change, and ongoing structural problems in the agriculture sector. In this context, the Ministry of Commerce affirmed that the country’s soft wheat supply will cover needs until the end of June 2022, while hard wheat and barley provisions will last until the end of May. The ministry also indicated that it will solicit Argentina, Uruguay, Bulgaria and Romania for soft wheat supplies, and France for feed barley.

In the meantime, grain prices in the global market could double, and Tunisia’s food security hangs in the balance. On February 24, American wheat and corn futures reached their highest trade levels. The price of soy for vegetable oil also reached its record high since 2012. And just weeks away from Ramadan, the grain shortage is already palpable: major grocery stores are limiting the number of pasta and flour packages that can be sold to each customer.

Energy is another sector hit by the Russia-Ukraine crisis. The barrel price of crude oil has surpassed the symbolic 100 USD threshold. This will entail accelerated inflation in Tunisia, especially after the ministry of energy’s decision to gradually reduce fuel subsidies. Western sanctions including the exclusion of Russian banks from the interbank platform Swift have already placed a strain on energy trading. New measures targeting Russian exports will put even greater pressure on the market, in the absence of an immediate alternative for energy resources. 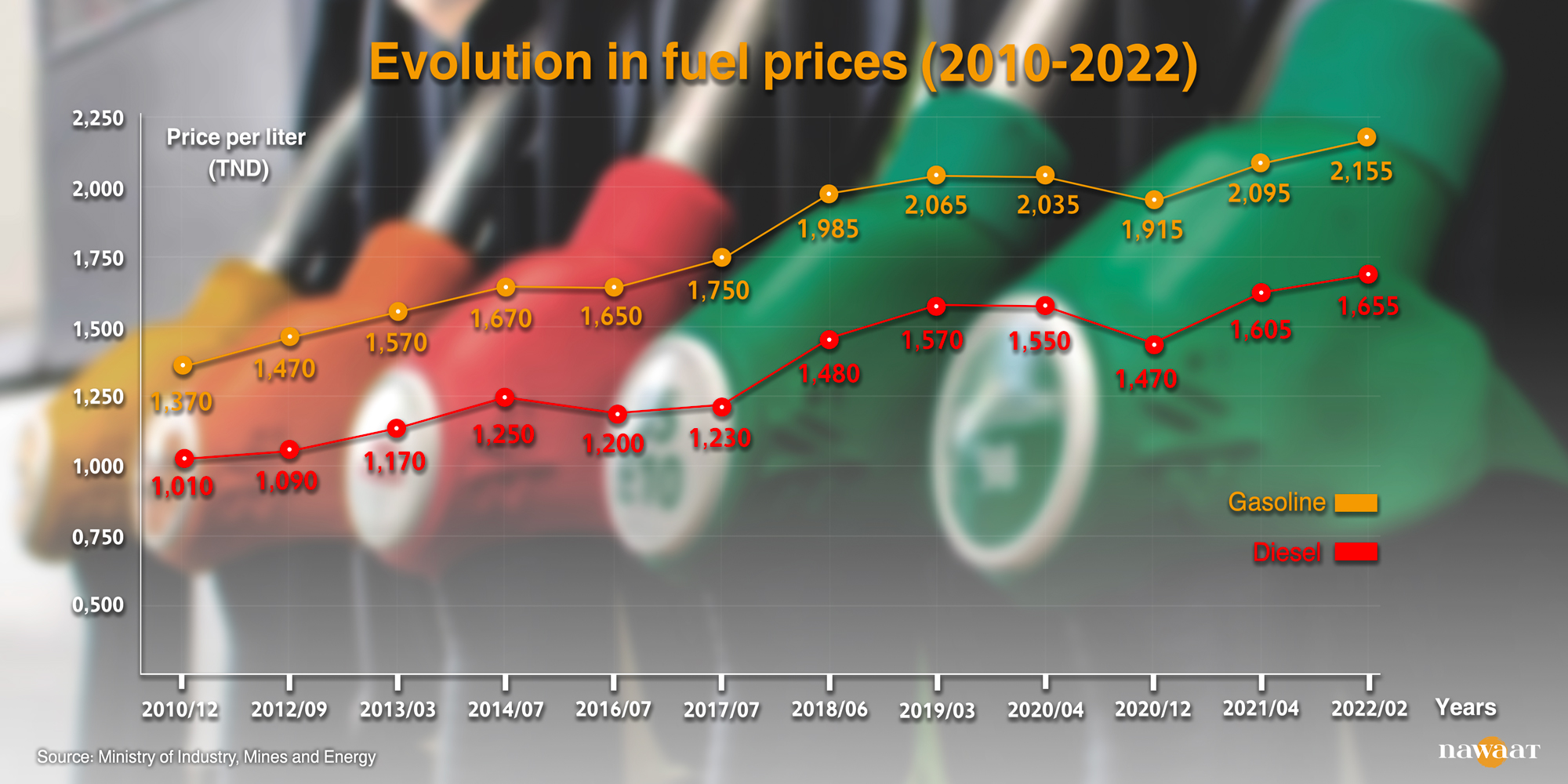 Certain Gulf actors—namely Qatar—hope to exploit the current energy dilemma to meet Europe’s energy needs, in coordination with Algeria. The situation in this light is not entirely without benefit for Tunisia, which could take advantage of its increased portion of the Algerian gas traversing the country via pipeline. This could compensate, at least in part, for losses resulting from the surge in energy prices.

Nevertheless, the looming energy crisis will have a significant impact to bear on Tunisia’s public finances. With a national budget calculated according to an estimated barrel price of 75 USD, the government will be forced to recrunch its numbers. Going ahead, a significant portion of foreign exchange resources will be put towards energy imports, where a one dollar increase in the barrel price costs the Tunisian government some 140 million dinars.

Food and energy deficits will mean increased spending for the country’s national compensation fund, as well as exacerbated inflation. And Tunisia’s flagging tourism sector faces still more bumps in the road ahead. Prior to the pandemic in 2019, some 633,000 Russian and 299,000 Ukrainian visitors arrived in Tunisia. In 2020, these numbers fell to 2,279 Russian and 1,299 Ukrainian tourists respectively. Hard to imagine their return in 2022, even just as the world has begun its slow recovery from the global epidemic. Indeed, the Russian invasion and associated economic sanctions are likely to further waylay any return to normalcy for the country’s tourism sector.  Tunisia’s hand certainly does not look good as it plays its cards in current negotiations with the International Monetary Fund (IMF).