While up to 60 percent of businesses in the sector offered workers the possibility of working from home, not all call centers provided workers this opportunity. Salma Houerbi, MENA researcher at the Business & Human Rights Resource Center and coauthor of their report “Disconnected: The COVID-19 Pandemic & call center workers’ rights in Tunisia & Morocco,” said they found this was partly due to demands from the call centers’ big international clients that employees continue to work on site. 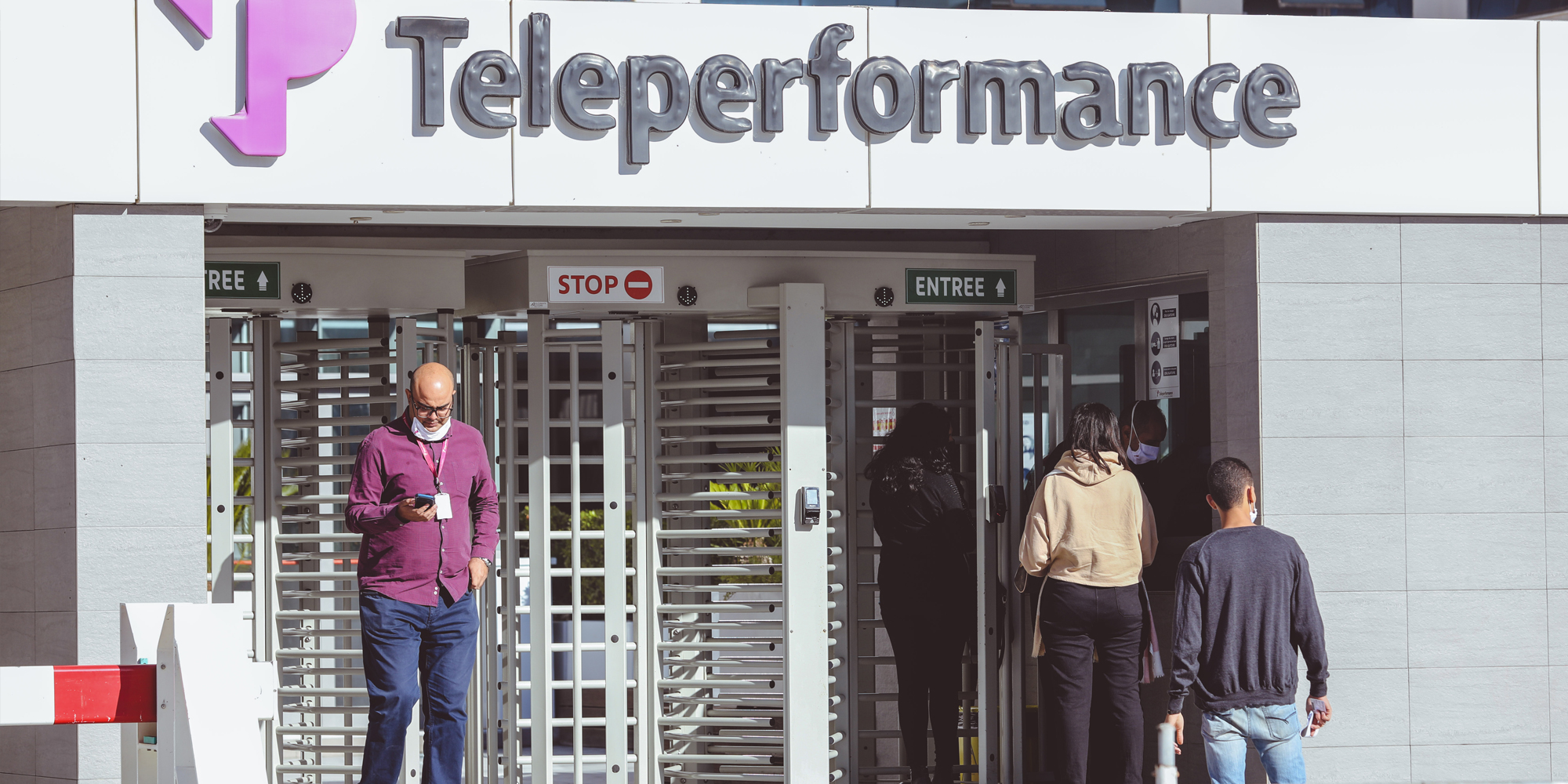 The Clients at the Top of the Value Chain

“What we noticed is that the clients—it’s a bit of them controlling the whole value chain…Orange, Paypal, Google send orders to call centers, and many of the activities they wanted them to continue taking place within call centers” because they said they didn’t want workers to access sensitive company data from their own homes, Houerbi told Nawaat.

Following the outsourcing of manufacturing jobs from Global North countries to Global South countries starting from the 1970s, the services sector also began outsourcing in this pattern in search of cheaper labor in the 1990s. In a follow-up conversation with Meshkal/Nawaat, Houerbi explained the power dynamic at work between international clients and Tunisian call centers. “They’re the ones who actually have power over the call centers…we’re looking at a value chain and they’re at the top of the value chain and they determine the pricing; they have a code of conduct, they also send out policies, and they determine the conditions of work,” Houerbi explained.

“Bigger companies set the standards…it’s interesting to see that Google or Orange would have different standards for workers operating in-house [in contrast to] workers operating for them outside. That shows the discrepancy between having a worker that’s near you, in the US in Silicon Valley, or a worker in Tunisia,” Houerbi added.

But worker conditions also depend on other factors than geography and a country’s place in the value chain. Of the estimated 25000 Tunisians officially working in call centers [many others work off the books in the informal sector], the few that have unionized appear to have fared better during the crisis and in their overall work conditions. Within Téléperformance, a massive multinational that employs thousands in Tunisia, there is a grouping of local unions affiliated with the Tunisian General Labor Union (UGTT) called “Basic Unions UGTT Téléperformance Tunisia,” which has been active since at least 2012.

Majd Toumi, who works at the Charguia branch of Téléperformance—one of many across the country—is a member of his local syndicate and told us that about 40 percent of his fellow workers are also union members. He described working conditions and benefits that are extremely good compared to his colleagues working for other call center companies.

We had only one suspected [COVID-19] case in Charguia—suspected, it was not confirmed…She did not come into work; that day we stopped work. There was a team that cleaned the workplace, the door handles, the chairs, all that,

Toumi said he was satisfied with the health measures taken at his work place, including keeping one work space empty between workers to maintain social distancing, conducting temperature checks, providing hand sanitizers, cleaning regularly, assigning someone to open doors for other employees, and all this on top of employees’ normal healthcare insurance package that pays out up to 4500 dinars per year for extra medical expenses.

“Honestly, Téléperformance is a company apart. You can’t compare [it with others],” Toumi said. But even at Téléperformance with its unionized workforce and employees who proudly told Meshkal/Nawaat about it being among the “Best Places to Work” in recent years, the company did not commit to paying their employees’ salaries in full during the COVID-19 lockdown. Of the five call centers in Tunisia and Morocco contacted by the Business & Human Rights Resource Center—including Téléperformance—“no call center explicitly committed to paying sick or quarantined workers their salaries in full, including target-based bonuses leaving workers to ‘pay the price’ for the pandemic.” 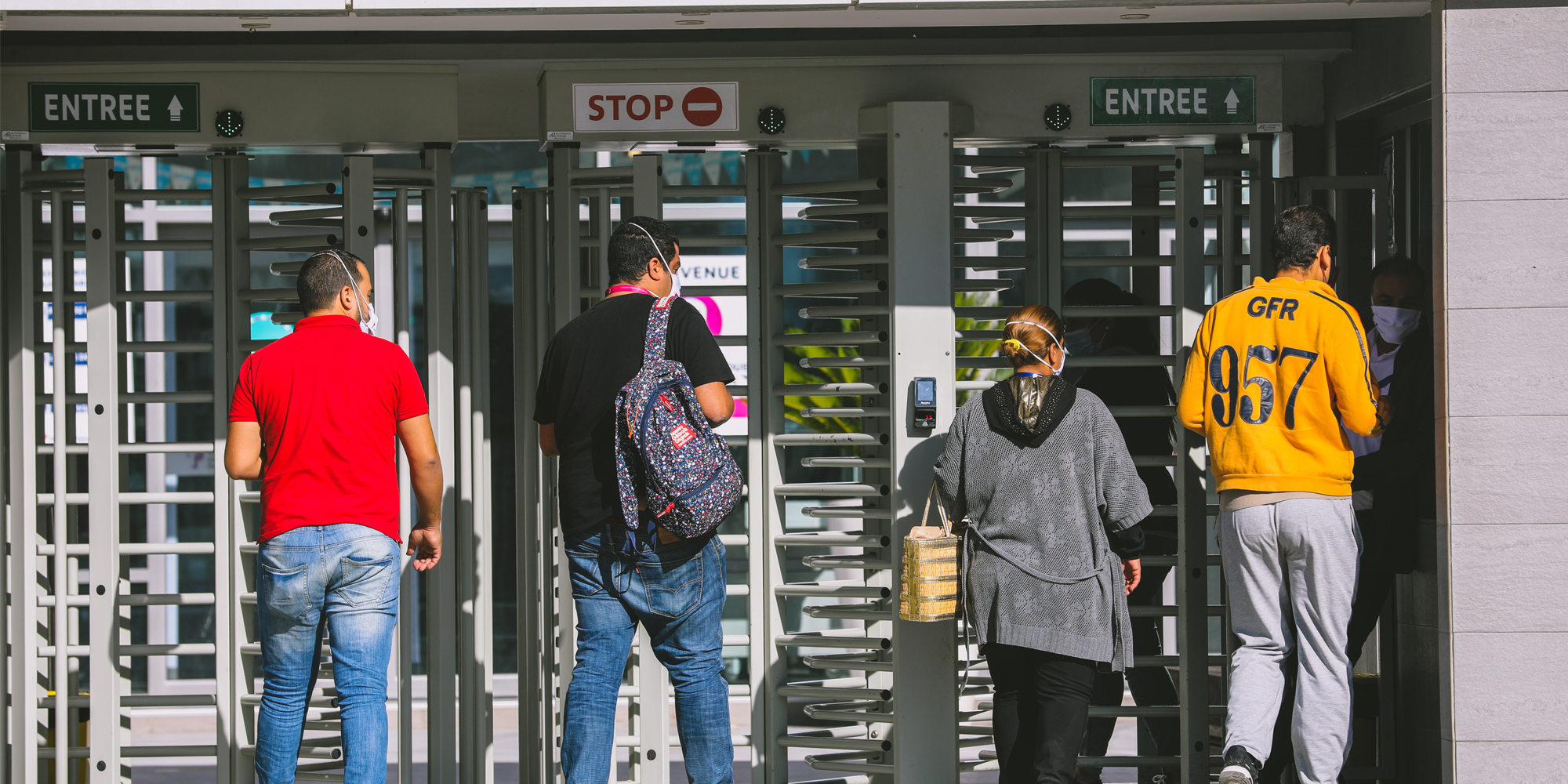 In April, Téléperformance Tunisia sent an internal note to employees committing to paying only 400 Tunisian Dinars [TND] gross salary to all workers for the month, a note published by the Téléperformance union grouping. At the time, people on the union grouping’s Facebook page noted that this 400 TND gross salary would come out to about 280 TND net, and this would apply to 4500 workers who could not work that month. That same month, the UGTT had already negotiated a deal with the Tunisian State and the main national employers’s union UTICA whereby the State committed to paying 200 TND of workers’ salaries in the private sector.

Meshkal/Nawaat spoke to two workers at Téléperformance whose jobs entail speaking with clients and both expressed a very high level of satisfaction with their jobs and work conditions.

“I chose to work in a call center. For me it’s the least stressful job in the world,” said Toumi, who also works two other part time jobs as an interior designer and as a musician. In comparison to the other two jobs, his work at the call center has fixed hours and bosses who he said are very respectful. But the nature of the job also appears to make a difference for working conditions. Toumi works with other businesses rather than end-use customers. In contrast, call center workers who deal with customer complaints or who have to cold-call people to make sales pitches report suffering worse pay, worse benefits, more barriers to unionizing, and more psychological stress.

“In fact even with professional clients there is a hierarchy; there’s someone for the back office, someone for front office, those who are good in written language but not in spoken language so they put them to work in chat,” Toumi explaining the different types of skill sets on which work conditions can depend. 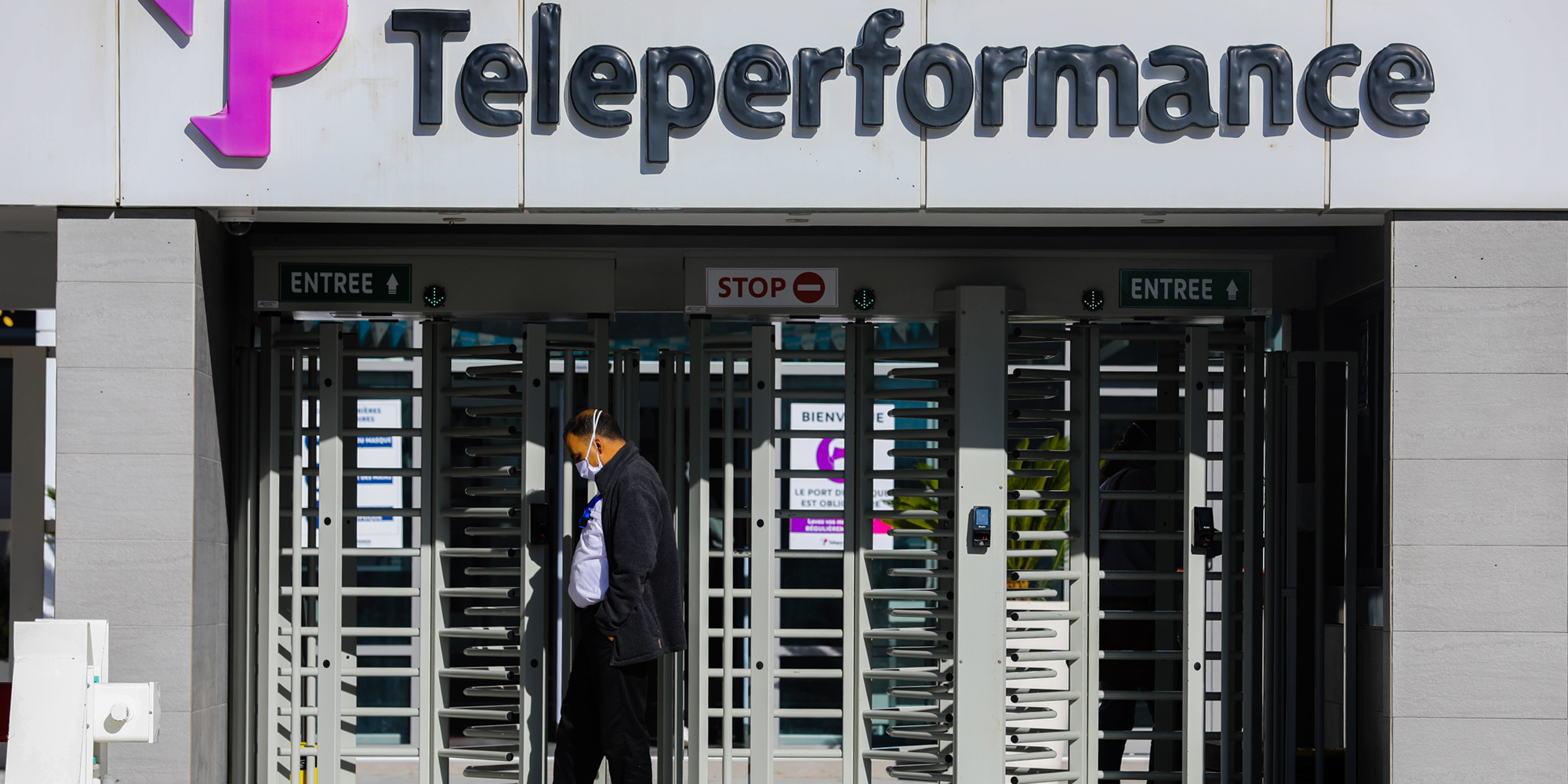 Then there are many who work for call centers that are not officially registered and which operate in the informal economy without giving workers proper contracts or benefits. Over the last 15 years, Meriem has worked for five different call centers where she said she has regularly experienced abuse and exploitation by her bosses and managers. She spoke to Meshkal/Nawaat on condition that her real name not be used due to fear of backlash from past employers. Although she has a university degree in IT management, she said she needed money and so turned working in a call center. By the time she thought about getting out of the business and back into her expected career field, she had lost some of her skill set.

Meriem recounted the abuses she’s seen over the years, particularly when she has worked at smaller, informal centers that don’t sign contracts with their employees. She has been paid in cash in cafés by employers, has suffered abusive bosses who curse and scream and withhold workers’ pay for minor infractions like turning up a few minutes late. Like many in call centers who speak primarily to French customers, she has always used a European-sounding pseudonym, avoiding using her own Arab name to avoid potentially racist reactions. Meshkal/Nawaat asked Meriem how she felt using a different name.

At the beginning it was tough but afterwards you get used to it. It’s not me, I’m lying. But afterwards you say, ok, I’m a TV actress… Managers tell you to choose a name that’s a bit Latino so if they doubt your accent… [they’ll think you’re] Spanish or Portuguese. The problem is [being] Arab

At one call center, all the women call operators were told to present themselves by the same name, ‘Marie Delco’, while all the male operators shared another, European-sounding male name. “They ask you [where you’re from] when you have an accent. Overall [my accent] passes, thank God. But for other people it doesn’t. One time, a woman called me… said ‘ah thankfully a Frenchwoman on the phone, finally a Frenchwoman.’” According to Mohammed Benzaied, a manager at a multi-language call center,

some callers will say: ‘Put me through to someone who speaks English.’ They ask where are you from, [you say] Tunisia and they hang up. It doesn’t happen often but it does. Someone not prepared psychologically will be offended. It’s not personal, you’re nothing but a number, you’re no one to them.

However both Meriem and Benzaied also clarified that they encountered many kind customers as well. Benzaied said some customers would send gifts or chocolates to their call center operators in Tunisia from abroad. “We have even got one customer who got married [to the call center employee]. He kept calling, asking for her. I know she’s good and she gives all good support, but so are the other employees. Later on I discovered she [the employee] was engaged to someone in Britain and it turned out to be the caller,” Benzaied said. 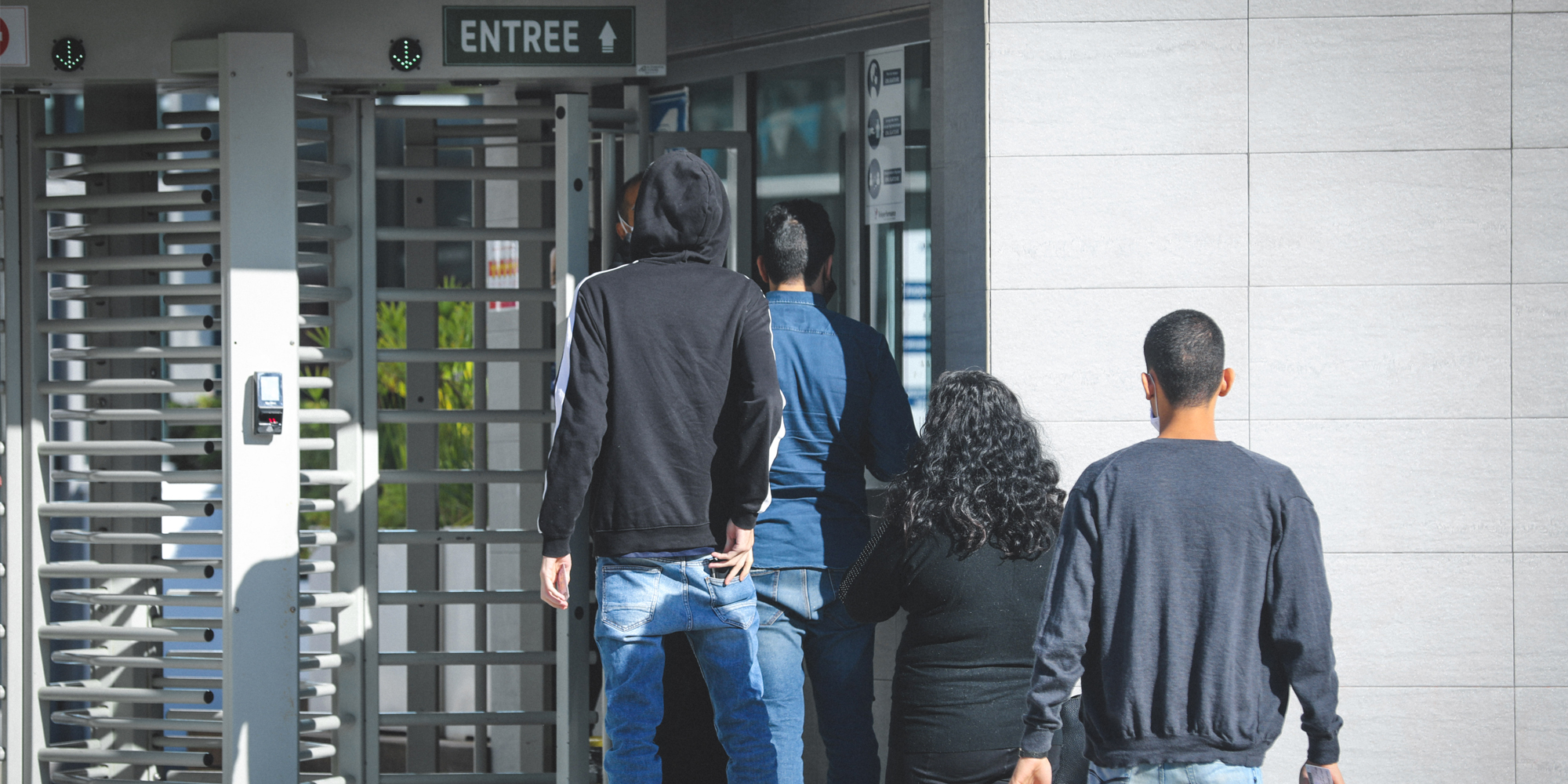 Benzaied joined a big company early and moved from working the phones to manager after only five months; he said this kind of internal promotion was common early in the company’s operations in Tunisia. In contrast, Meriem said that the smaller companies she worked for all recruited management and directors from outside the ranks of the call operators, so there was no opportunity to move up. Some workplaces required Meriem to cold call and sell goods or insurance to people in France, and her pay was tied to sales that became increasingly difficult, especially as deteriorating economic conditions in France reduced consumer demand. Meriem explained that both salaries and bonuses never kept up with inflation or currency devaluation; this was particularly true at her last call center job, where she started at a 700 TND per month salary in 2012 (about 340 Euros at the exchange rate then) and left making 820 TND per month in 2020 (about 250 Euros).

At one job, Meriem was pregnant and had been demanding for months that her employer pay into her State social security benefits. One day, Meriem stopped working suddenly, took off her headsetand told her employer she wouldn’t work until they complied. They conceded after she told them she knew someone who worked for one the social security funds, but no one else in the call center got the same benefits.

People who work in call centers, I don’t want to generalize, but the majority is not demanding… you don’t have the strength of a group. You are all alone, always facing the directors… What bothers you is the atmosphere in call centers. The people that surround you, the majority are people who are completely erased, totally. Men and women, married, young, old… It’s the same thing

Many call center workers have university degrees and receive higher salaries than minimum wage, and conditions are often better and physically safer than in manufacturing or agriculture. However this doesn’t mean that worker abuse isn’t an issue. “We are thinking of manufacturing as the sector that would carry the most labor rights abuse, but call centers—yes workers might be more qualified, they might also be getting higher pay. But that’s not the question. The question is whether work is dignifying work, of whether work is actually decent from all perspectives,” said Houerbi. “Wage theft? You have it in the garment sector but you also have it in the call center industry. If you have non-payment of wages on time, if you have miscalculation of overtime, these are patterns we’ve seen from the service industry to the manufacturing industry.”

Houerbi also pointed to the psychological abuse that call center workers experience as an issue that is particular to the nature of their work. “The call center industry carries its own vulnerability because it’s a sector that’s so invisible,” Houerbi said. “Mining is clearly hazardous work but we don’t really see the hazards behind sitting in front of a computer for eight hours having to take queries of customers who are angry, who can be racist – what is that mentally for a worker?”