Introduced by the new public budget, price increases for a majority of consumer goods and services galvanized action in the streets where protests initially took the form of awareness campaigns and calls to organize under the slogan « Fech nestannaw » [What are we waiting for?], and quickly turned into confrontations in a number of regions.

Map of protests against the finance law

As it turns out, this January is much like the January months of previous years, with diverse protest movements across the country. The first of these to take place this year was on January 4, in the northern Battan region of Kairouan, which coincided with the « Fech Nestanaou » campaign in Tunis, Sfax, Ben Arous and Sousse, and in which more than 50 activists were arrested over a period of 48 hours. The movement was launched in the beginning of the month through awareness campaigns concerning the provisions of the new finance law, and the call to repeal its approved tax procedures and price increases. Subsequent protest movements took place in other governorates and to the north-western town of Sakiet Sidi Youssef on Saturday, January 6 following the suicide of a young man in despair over his social situation. On Sunday, similar movements formed in Meknassi, where the local UGTT office called for a march; in Redeyef, with a march organized by the Popular Front; in the mining basin towns of of Metlaoui and Om Larayes which ended with protesters attempting to cross the border into Algeria. 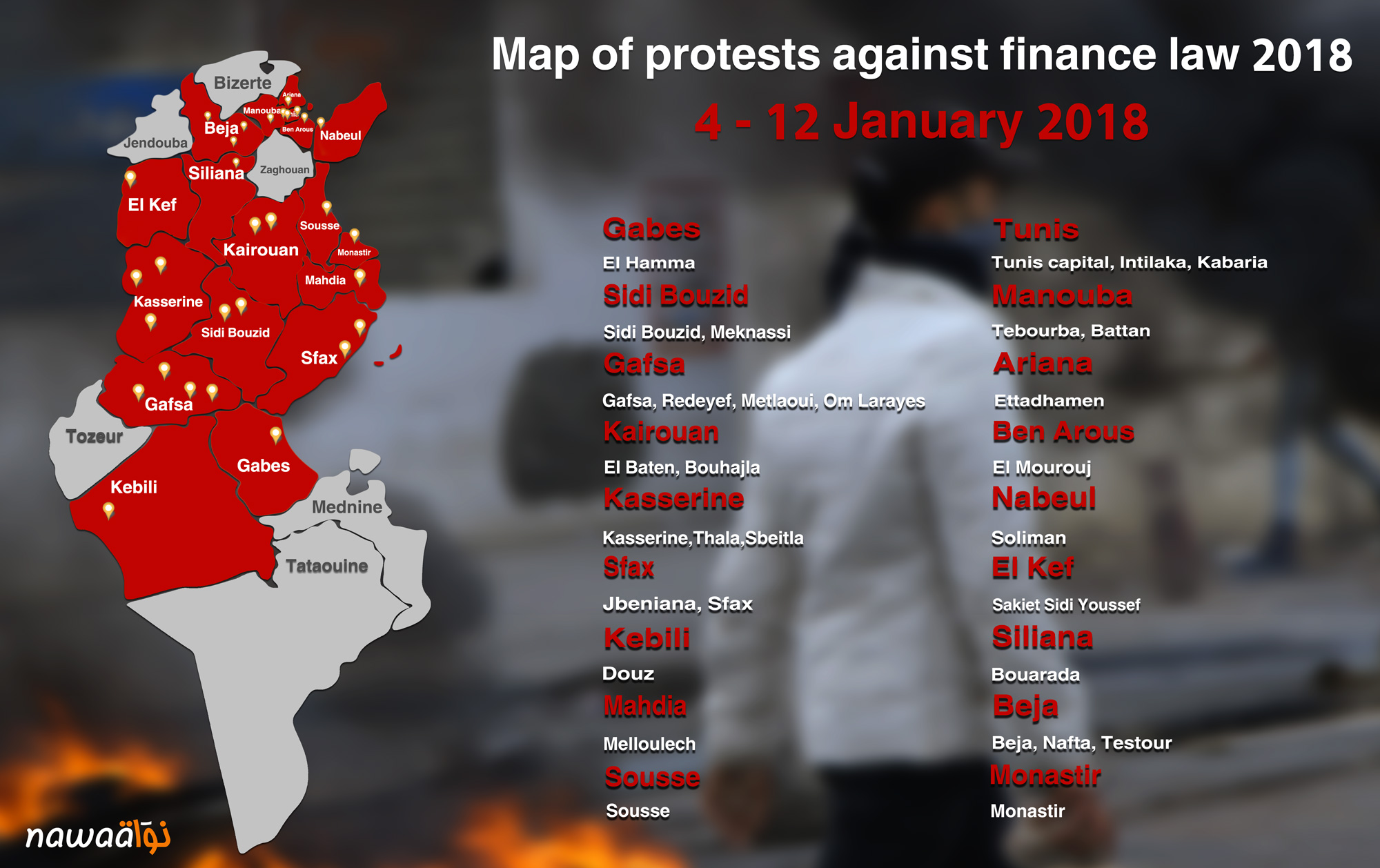 Back in Tunis, arbitrary arrests and the government’s purely security-based response to the « Fech Nstenaou » quickly developed on Sunday into a confrontation between security forces and activists heading towards the Interior Ministry. In the meantime, tension was mounting south of the capital, in the city of Thala, which witnessed the most violent confrontations between demonstrators and police forces. Movements continued late into Sunday night in Douz, governorate of Kebili.

From Thala to Tunis in 24 hours

The tense situation, fueled by the government’s security approach and continued deafness to the demands of protesters, peaked at the beginning of the week. From early on, enhanced security presence in anticipation of movement on the streets foreshadowed the escalations that were to take place on Monday, January 8 in Thala, Meknassi, Redeyef, Sbeitla, Kasserine, Kairouan, Melloulech, Sidi Bouzid, Bouhajla, El Hamma and the city of Gafsa. Before long, protests had spread to the outskirts of the capital. It was here, in the town of Tebourba (governorate of Manouba), where Khomsi Yafrni died, having allegedly suffocated from tear gas. The victim’s family denied the cause of death, pronounced in a statement by the Interior Ministry.

Chaos broke out immediately in the capital’s Intilaka and Ettadhamen neighborhoods where banks and stores were looted. Similar events unfolded, in the complete absence of security forces, in the city of Redeyef. Eye witnesses told Nawaat that the sudden retreat of police even before protests began was a factor that had encouraged a number of delinquents to infiltrate the protest movement and take to looting.

Chaos weighs on the positions of political parties

Tuesday morning was relatively peaceful in spite of sporadic movements that took place in Regueb and Jbeniana, as well as on Avenue Habib Bourguiba in Tunis in the enhanced presence of security officers. In the political sphere and the media, however, government officials, political parties and civil society organizations reacted to Monday’s events.

The wave of news reports, images and rumors that flooded social media and news outlets fueled a widespread sense panic. Supporters of the protest movements became divided over the chaos that had broken out in the neighborhoods of Intilaka and Ettadhamen in Tunis, and at the municipal warehouse in Kasserine.

Statements of opposition parties such as the Popular Front and Attayar bore no difference in their positions regarding the finance law and support for the protest movements and emphasized their rejection of violence and chaos. Even the labor union’s position began to change following the events of the previous night. UGTT Secretary General Noureddine Taboubi denounced the organization of nighttime protests under any circumstances. On the other side, recent events were considered to be a political plot against the ruling coalition, and the opposition’s irresponsable attempt to manipulate the difficult economic situation for political gains. In this context, Ennahdha was most outspoken in its rejection of protests, pointing a finger at what it called « anarchical leftist political parties ».

Political positions did not weaken the momentum of protests, which turned into confrontations on Tuesday night in other regions, including Soliman (Nabeul), the city of Beja, Testour, Nafza and the city of Sfax. The trend continued, with reports of looting and violence, in Kabaria and Intilaka (Tunis),  Bouarada (Kairouan), Thala, Ezzouhour (Kasserine), Meknassi (Sidi Bouzid), Gafsa and Douz (Kebili).

Prime Minister Youssef Chahed, who chose to visit a military base in Remada in the midst of protests, expressed in a first statement that what he sees are not protests but looting and anarchy. His statement is telling of the government’s vision of the current crisis, and in part translates his intention not to back down regarding the finance law which triggered the present situation. A position confirmed by the government’s official spokesman Iyed Dahmani who considered that the recent increase in prices to be « a bitter but necessary medicine ».

Chahed’s government is facing the third wave of large-scale protest movements since January and April 2017. And although current events may resemble previous periods of contestation, this the first time in which traditional manoeuvres are no longer effective. The demand to reexamine the finance law which continues to mobilize protests throughout the country has made clear what the government’s options might be. And this time, visits by ministerial delegations to different regions, negotiation meetings, and promises of job positions in environmental companies will not be enough.

The present crisis surpasses the government’s capacity to block protests in the regions, a tactic it had mastered after 2011. This tactic revolved around containing waves of anger outside of the influential political sphere, undermining social movements by pulling them into trivial negotiations over bits and pieces of sectorial demands, and revising government policies and economic options that ultimately failed.