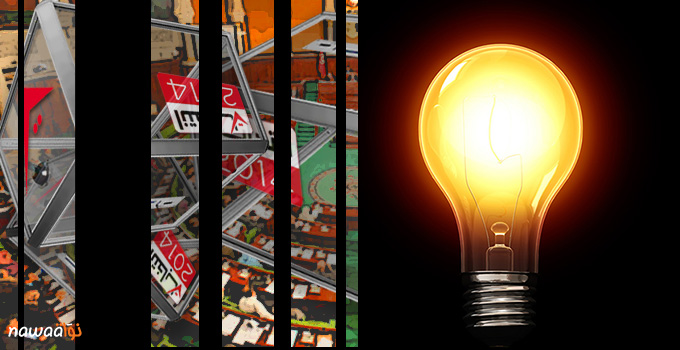 Currently, in post-revolutionary Tunisia, there are a lot of hot debates taking place. This however, is neither new nor peculiar for the Mediterranean country. States that have undergone drastic political changes have always been fertile ground for endless controversial discussions concerning governance, identity, the state system, and society.

“Role of civil society in the democratic transition” for example, has been, at least in the last five years, a catchall motto in Tunisia. Several activists and bloggers showed growing interest in the critical role of civil society organizations, and conferences have been held under the same motto–“Tunisian Civil society”–and international think-tanks have organized discussions on the present and future of Tunisian civil society movements in the light of the Arab uprising.

Is it really important to pay so much attention to the civil society in Tunisia?

The answer is simple; yes.

First, it is worth recalling that the number of civil society organizations in Tunisia reached 18502 by the end of the year 2015. This is a quite big number in a country striving to build up a culture of democracy and pluralism.

For many, democracy is a “miracle” and one element to make this marvelous event achievable is the presence of an effective civil society. Of course, when we refer to “civil society organizations and movements,” the quality and quantity are equally important.

Needless to say that the establishment of a new democracy is a priority now according to Tunisians. Thus, Tunisians should also consider establishing a genuine culture of civic-mindedness. This will render the citizenry a key player in the making of a Tunisian democracy.

Why is civil society positioned in the fore of the democracy ship?

As I said before, democracy is not merely a matter of politicians and governments. Citizens, those who form what is called civil society, are also a key player in the scene.

The discussions concerning the role of citizens and civil society in politics and in building a democracy dates back to the 19th century with Alexis de Tocqueville, French sociologist and political theorist. Tocqueville tells us that civil society’s role is indispensable. For him, this body has an intermediary role between the state and the citizens. Actually, according to Tocqueville, a functional civil society offers a space of liberty and freedom for citizens. Simultaneously it makes it difficult, if not impossible, for the “state repressive apparatus” to jeopardize the status of freedom in a country.

As a matter of fact, since Tunisian independence in 1956 and up until 2010, the state had always oppressed civil and political rights. Parties and civil society organizations were co-opted. At times, they operated under tough circumstances. The state was everywhere, and this caused, in large part, the 50 year-long trauma. Now however, Tunisians have the chance to block any attempts to reproduce a Zin El-Abidinian-like regime; the tool for this blockage is the functional civil society for which Tocqueville advocated.

Likewise, for some theorists, civil society is believed to have the capacity to build a social capital and social trust. Here, it is important to mention that, in a transition from an oppressive regime to a democratic one, the end of the journey is unpredictable. A state might succeed in reaching the shore and there begins a second-long journey of establishing a democracy. Other probable ends might be what we can see now in the Middle East: state collapse in Syria, civil war in Libya, a continual sectarian conflict in Iraq. Now, in a sense, the above mentioned social trust offers an immediate antidote to the first signs of the occurrence of such events, which are very probable in Middle Eastern states. Social trust or social capital is described by some as a “glue which facilitates co-operation, exchange and innovation.” For the sake of simplicity, we can think of the social trust as a harmonizing mechanism which brings diverse groups and communities together by increasing the solidarity among them. The social trust is very crucial in post-revolutionary Tunisia, a country which aims, in the long-run, to render its fragile democracy a genuine one in a region reluctant for revolutionary change which blossomed into a democratic transition.

Tunisian civil society: strengths, weaknesses, and the endless challenges ahead

In March 2012, the Representation of the Commission of the European Union in Tunisia prepared a study entitled “Report on the Diagnosis of Tunisian Civil Society.” The study lists the strengths and weaknesses of Tunisian civil society as follows:

Along with the findings of this study, an observation of the performance of the civil society organizations from 2011 until now 2015 reveals some other strengths and weaknesses:
No doubt, civil society was of utmost importance in the process of drafting the constitution.

Many civil society organizations lobbied for greater transparency, and one in particular, Al Bawsala, played an important role in enhancing transparency by publishing National Constituent Assembly documents and posting on social media the attendance records of deputies and their individual votes during plenary sessions.
The Constitution-Making Process in Tunisia, The Carter Center.

Also, civil society organizations played the role of watchdog. Organizations such as “Doustourna” (Our Constitution) Network were influential during the drafting of the constitution and in the aftermath of that phase. “Doustourna” Network’s main task is to advocate for human rights and freedom and to draw attention to the main issues related to constitutional laws, and to implement the newly born Tunisian constitution. In addition to all this, Tunisian civil society, during troubled times, such as the political assassinations of C. Belaid and M. Brahmi, stood against violence, and centered its demands around peaceful shift of power between governments and social solidarity against terrorism and political assassinations. It is worth remembering also that, “Shams” an LGBT organization, operates in Tunisia while facing pressure from some radical Islamists. In short, Tunisian civil society’s performance from 2011 to 2015 was relatively efficient. A Nobel Peace Prize was awarded to the Tunisian Dialogue Quartet, and Tunisian civil society actors were described as transforming “from revolutionaries to peace keepers.”

Yet, Tunisian civil society organizations still have some weaknesses.

1. The presence of these organizations in the country has to be widespread and not centered in big cities and the capital. (Figure 1). 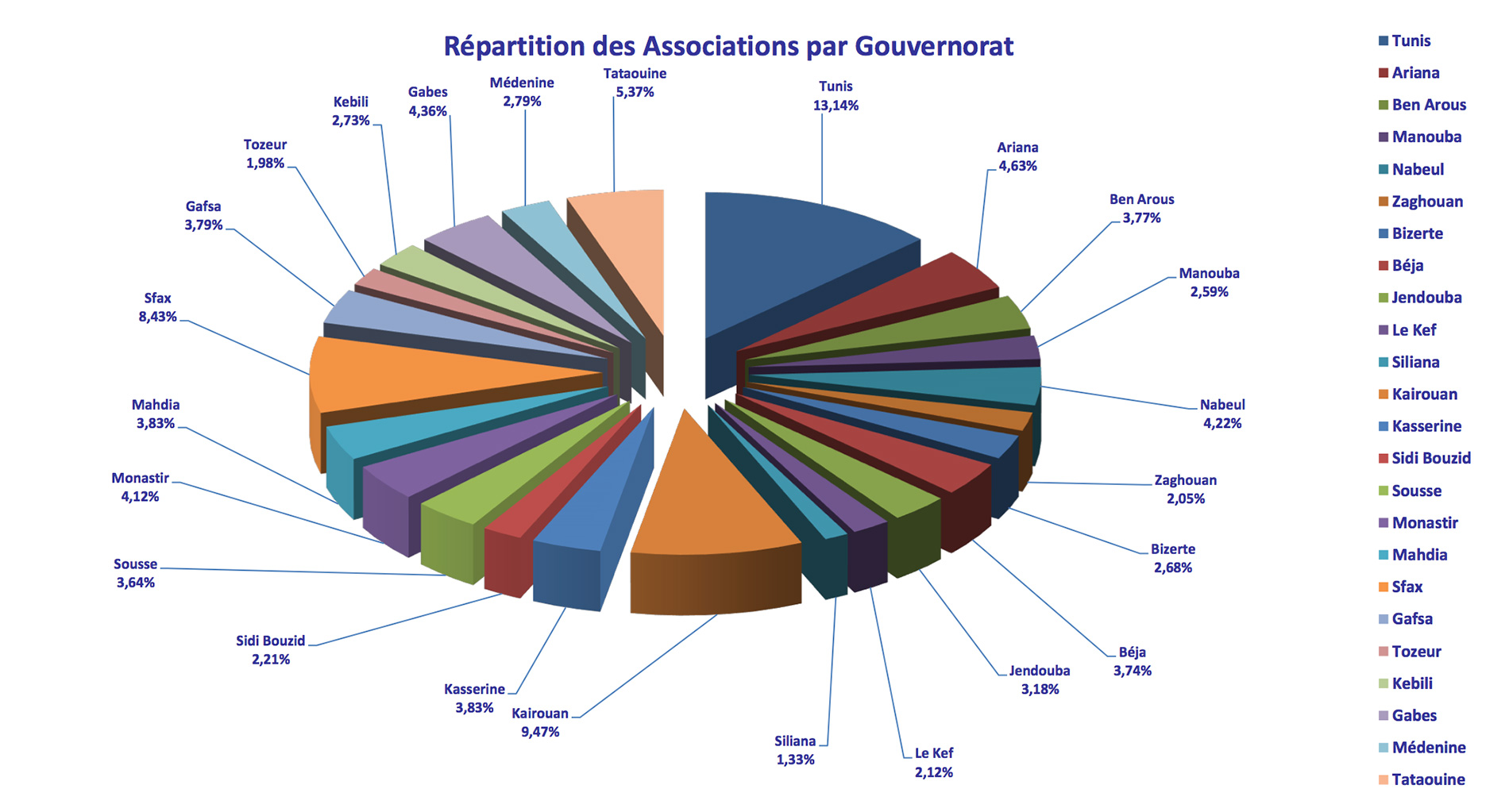 2. The activities of the organizations are mainly directed into education, charity, cultural events. There has to be more focus on the making of organizations which target human rights or play the role of watchdog when it comes to politics. (Figure 2). 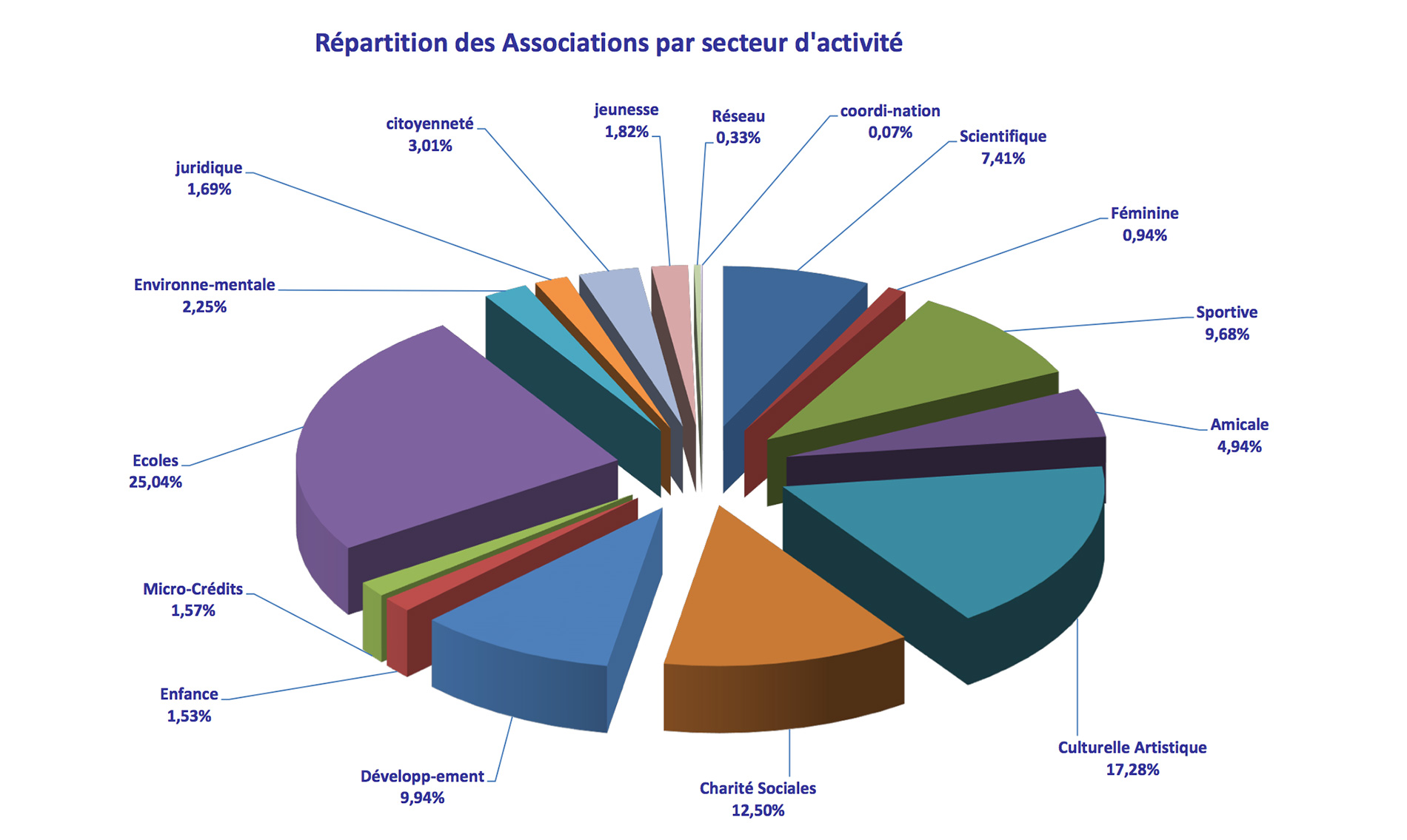 The booming civil society in Tunisia calls into question its effectiveness as well as its capacity to be the horse of democracy in the post-revolutionary country. Can Tunisian civil society actors guarantee the rights of LGBT communities? Can they challenge taboos? Can they put an end to gender discrimination and corruption? Equally important, is the Tunisian CSO success story durable? And can this flourishing civil society be the “word of honor” that will make the fragile Tunisian democracy a genuine one in long run? All these questions remain prominent in the public conscience.