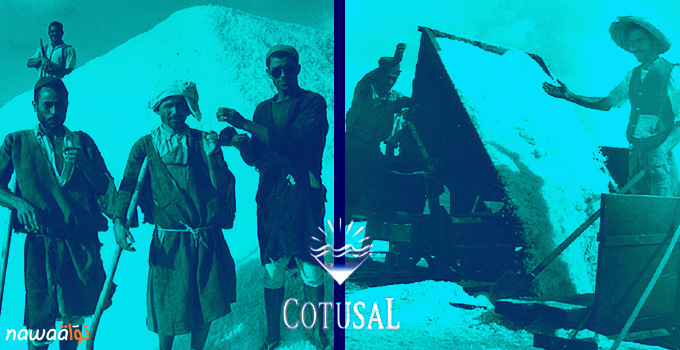 Earlier this month, Nawaat visited one of four regions in Tunisia where the French Compagnie Générale des Salines de Tunisie, or COTUSAL, extracts and produces salt for the local market and for export. The ensuing report, which elicited a prompt response from the company, is the most recent in a series of articles from the past year that explore the legal, economic, and environmental implications of the company’s operations.

For some, the history of salt extraction and production in Tunisia is one of exploitation of human labor and natural resources throughout French colonization (1881-1956). The earliest indication of French salt production in the country appears to be the founding of a saltworks in Khniss in 1903. According to one printed source1, “Its workers had already participated in a general strike against their low salaries and dreadful working conditions in 1904.” While the same source holds that COTUSAL was the founder of these early operations, other sources, including the company itself, maintain that COTUSAL was born of the fusion of four French salt extraction companies in 1949.

1949 Convention
Around the time that the country’s new constitution was adopted 26 January 2014, the media keyed in on years of political corruption and legal deficiencies that have impaired effective management of natural resources. In parliament, Chafik Zerguine of the Committee of Energy and Productive Sectors pressed former Minister of Industry Mehdi Jomâa to “renegotiate extraction contracts that have been in place since even before Independence.” As an illustration, Zerguine cited the 1949 Convention d’Exploitation des Salines par les Français of which Article 11 stipulates

According to Nawaat contributor Mohamed Dhia Hammami who was closely following COTUSAL at that time, Zerguine argued that it was unacceptable that the country receive so negligible a sum for the exploitation of its own salt resources on the basis of policies dating from the colonial era. Through Tunisian independence from France in 1956, successive governments, revolution, and a new Constitution, COTUSAL’s concessions in Tunisia have remained adherent to the 1949 Convention. As Hammami emphasized, the agreement has not been modified to conform with post-colonial legal frameworks except on three occasions—twice to expand and once to diminish the area of land the company occupies. For its part, COTUSAL has claimed to have fought for updating old policies to the extent that it once produced a draft law to replace the 1949 Convention.

Sabkhet El Gharra Concession
Last February, Hammami questioned Jomâa’s intentions to follow the Energy Committee’s demands and review outdated concession policies. Not only did regulations remain unchanged during his term as Prime Minister, but COTUSAL was granted a new concession in the salt marsh Sebkhat El Gharra. On 14 May 2014, Minister of Industry Kamel Bennaceur signed in approval of the company’s rights to extract and produce salt on 11,200 hectares of land between Mehdia and Sfax. Hammami challenged the legal basis for the agreement, claiming that it was based on old regulations and had not in fact been granted official approval, while COTUSAL argued that the necessary administrative procedures had taken place before the promulgation of the 26 January 2014 constitution. In a statement on its website, the company insisted upon its readiness to conform to new regulations: “If tomorrow the law changes, COTUSAL will comply.”

Unpaid Debts 2007-2012
Hammami brought attention to a letter dated 23 October 2013 in which the Minister of Finances had addressed the General Director of the Agence de Protection et d’Aménagement du Littoral (APAL) stating that the company’s failure to pay its dues, a sum of 5.7 million dinars accumulated over a period of five years (2007-2012), was reasonable basis to terminate COTUSAL’s contract. COTUSAL has claimed that it had not received the letter nor been informed about the sum owed to the State, but that on 31 October 2013, APAL had solicited a payment of 813,822,000 dinars albeit without any clear explanation of the calculations or legal basis for the demanded sum.

The unearthing of these numbers, observes Samih Ben Okkez who also reported for Nawaat on the ambiguous status of COTUSAL’s debts, coincided with Mehdi Jomâa’s trips abroad to seek out foreign investment in Tunisia’s “Start-Up Democracy.” In retrospect, Okkez has commented, Jomâa would have done well to take the Energy Committee’s demands to heart and to settle accounts with foreign companies already invested in Tunisia. 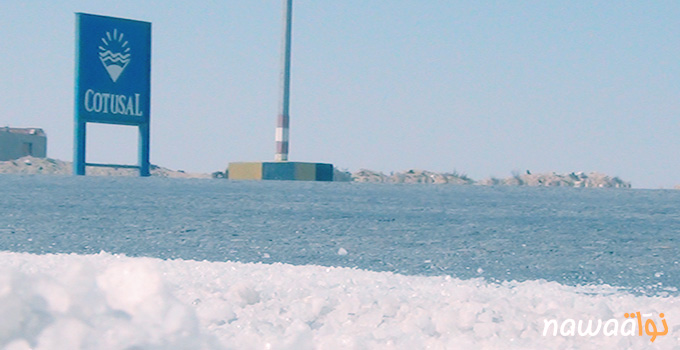 Today, sixty years after the country’s independence and the departure of the French army, it would seem that France has maintained its economic interests and has kept its hands on what it considers the legacy of its mandate … that is not subject to the constitution or local law. Samih Ben Okkez, Salt in Zarzis: White Gold Pillaged

The latest chapter in the COTUSAL case is Nawaat’s investigation into the saltworks in Zarzis, where the company has been active since 1993. In March 2011 company workers protested against what they perceived to be French “direct colonization and control” that has contributed to the region’s economic marginalization and environmental degradation.

The documentary includes a leaked clip from a meeting held by COTUSAL representatives and a delegation of Zarzis residents who reproached the company for failing to contribute to regional development and participate in job creation and infrastructure improvements. Zarzis locals have complained that the amount of land that the company occupies—fifty times that of the town’s urban areas—warrants just economic compensation and investment in the region.

The Nawaat crew spoke with local activists, fishermen, and farmers who voiced concern over the effects of salt production on the surrounding environment and the lack of official regulation that has prevented the effective protection and preservation of marshlands, coastline, and agricultural lands. Fluctuating concentrations of water and salt attributed to the company’s extraction and production processes have reduced soil fertility and resulted in the drying out of olive trees, while the unnatural movement of water has affected fish populations whose habitat extends across both marsh and sea, residents argue.

It is far-fetched to consider salt a natural resource. COTUSAL representatives quoted in Response to Right of Reply: My Meeting with COTUSAL, Med Dhia Hammami

COTUSAL has been and remains willing to participate in the realization of some works in Zarzis, provided that all other companies occupying land here also contribute.” COTUSAL’s response to Salt in Zarzis: White Gold Pillaged

Several days after the publication of Salt in Zarzis, COTUSAL General Management wrote to Nawaat to address a number of points presented in the report. The company took issue with, among a dozen or so arguments, talk of the “pillaging of natural resources,” although “salt originates from sea water, and we simply enter those waters into basins over vast, flat areas, a method used since the old ages, as this is an indefinitely renewable resource”; claims of “environmental disaster” which have been made “without reference to any study or scientific examples” though the “company is ready to conduct a study under the supervision of specialists from the Ministry of the Environment and Ministry of Agriculture”; questions about the impact of activities on Zarzis in light of the “cost of wages … more than 1.7 million dinars paid each year to COTUSAL employees and workers … contributing to the economic activity of the region.”

Okkez finds the company’s response as threadbare and evasive as previous rebuttals and public statements. He comments, for instance, that one does not need a scientific investigation to observe with his own eyes and glean from first-hand accounts the ecological degradation that has occurred across land and sea, that the money paid to workers for their labor is “not a gift,” that employees’ and Zarzis residents’ demands are for just compensation for the human and environmental resources that Tunisia provides, that the country’s need for foreign investment is not an invitation to simply take away.

Transparency and the Extraction, Exchange, Diffusion of Information

After plugging some numbers (drawn from the company website, articles written by Nawaat and COTUSAL statements issued over the past year, and general information online relating to the costs and values of salt resources and extraction and production processes) only to come up with ball-park estimations of important figures, it was clear that several unanswered questions rendered precise calculations impossible:

1 What is COTUSAL’s annual revenue?
2 What does the company pay to the State annually?
3 What is the company’s annual profits?

We submitted these questions to COTUSAL and received a prompt and straight-forward reply, with the exception of the question concerning annual profits, for which the company has instead provided a number for tax on profits:

The availability of such facts and figures inevitably reduces much supposition and misinformation with which the company has taken issue, and enables discussions based on the most accurate and essential information regarding COTUSAL’s operations in Tunisia. Those in politics, media, and civil society engaged in these discussions concerning the management and exploitation of the country’s natural resources have done well to put pressure on such a temporally- and geographically- well-established company. In order for the governance and distribution of wealth in Tunisia to change, well- and newly-established foreign investors alike must observe and adhere to current legal frameworks, exhibit transparency and accountability in economic and environmental impact on regions occupied and the country at large, and above all maintain an open dialogue with the stakeholders, decision-makers, and custodians of Tunisia’s monetary and natural wealth.