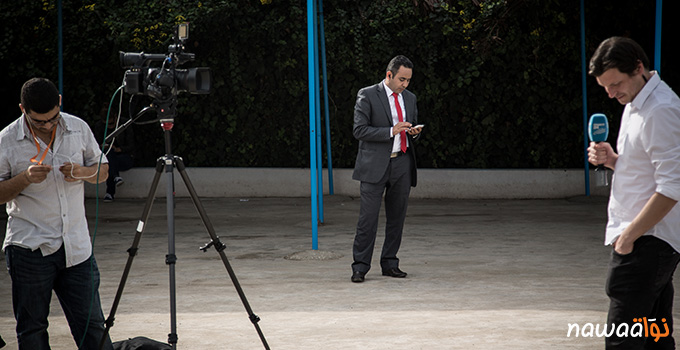 By Nadia Haddaoui, translated into English by Vanessa Szakal.

What role have the media played in the orientation of public debate and the construction of opinions in this polarized electoral period? A very bad role, according to the HAICA’s third report on political pluralism that discusses the partiality of audiovisual media coverage of the presidential elections. What is more, the press has begun to sink into the quicksand of propaganda and voluntary connivance. But these relapses do not seem to worry either politicians or journalists.

In spite of the first round of extravagant and “intelligent” political marketing, the pluralist illusion has finally dissipated. In the media as in politics, everything has been played to dominant representations and their mobilization efforts. HAICA’s monitoring of 13 private and public television stations and 8 radio stations between November 1st – 21st, indicated that speaking and broadcasting time allotted to candidates was structured around the polarization characteristic of the political spectrum.

The Pluralist Illusion Has Dissipated!

Qualitatively, it is once again Hechmi Hamdi who bats the record with approximately 102 hours of television airtime, of which 72 hours were on his own station. The owner of Al Mustaqilla TV thus violates article 66 of the electoral code which prohibits «political propaganda in foreign audiovisual media during the campaign». In reality, no foreign media outlet has followed the guidelines outlined by the HAICA. It is therefore up to the ISIE to adjudicate on these violations, as the HAICA has not failed to suggest concerning the case of Hechmi Hamdi.

In the case of non-candidate political actors, the Ennahdha party classes first with approximately 56 hours of airtime, followed by Nidaa Tounes (38 hours) and the Popular Front (23 hours). Surprise surprise! On Nessma TV, Hamma Hammami ranks first (9 hours) followed by Beji Caid Essebsi (3 hours 30 minutes) and Ahmed Nejib Chebbi (3 hours), while Ennahdha is the station’s headliner (5 hours). On the radio, Hamdi is dethroned by Moncef Marzouki (8 hours 25 minutes) who also dominates airtime on Hannibal TV, Watanya 2, and Moutawassit TV, whereas Mohamed Hamdi (who pulled out of the running) ranked first on TNN (3 hours 38 minutes). On Al-Hiwar Ettounsi, Hechmi Hamdi (14 hours) and Nidaa Tounes (7 hours 59 minutes) are in the lead; on Telvza TV, it is Hamma Hammami (8 hours) and the Ennahdha party (6 hours 18 minutes). It isn’t surprising that Caid Essebsi (5 hours 26 minutes) ranks high on Zitouna TV next to Ennahdha (13 hours 18 minutes) in spite of the more than two hours of negative media coverage to the advantage of his adversary who also benefitted from qualitatively positive media coverage on the same station. 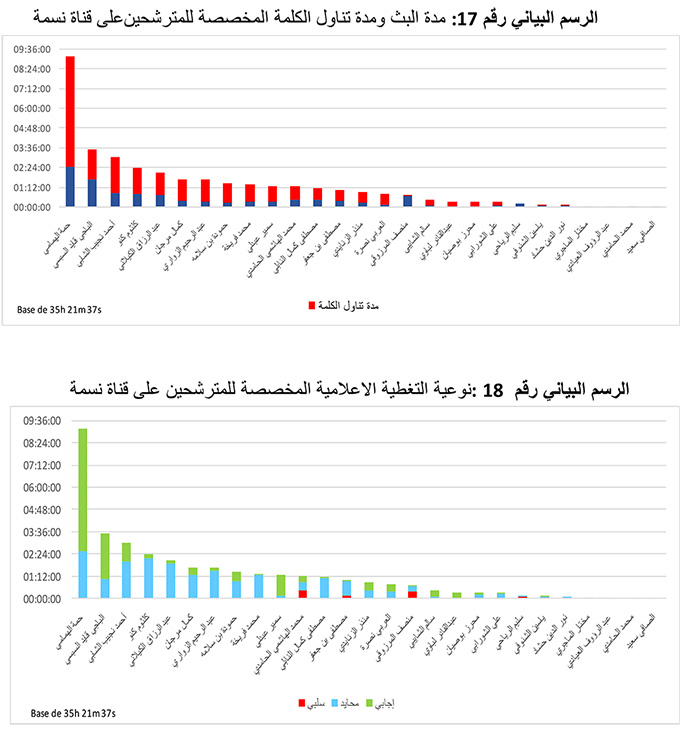 Although airtime on the radio might have initially reflected attempts to uphold the principle of equitable coverage, outlets have ultimately succumbed to the pressures of polarization. On Mosaique FM, Beji Caid Essebsi on one side is a headline candidate (1 hour 40 minutes) and Ennahdha (1 hour 33 minutes) on the other a non-candidate political actor. On Radio Jeunes, Kamel Morjane and Ennahdha are opposing ends of the political spectrum; Radio National—Larbi Nasra and Ennahdha; on Essahara FM—Abderrazak Kilani and Ennahdha; on Shems FM, Express FM, and Cap FM—Marzouki and Ennahdha.

Qualitatively we observe that some candidates, namely Nejib Chebbi, Slim Riahi, and Hamouda Ben Slama, are better-treated than others. Ultimately, the two candidates with the most visibility (as they are the most widely supported and criticized) are Essebsi and Marzouki. Hamma Hammami seems to have escaped critiques from his political adversaries.

HAICA and ISIE’s intriguing silence remains intact as the media continue to defy both regulatory institutions. We note first of all the irregularities that put into question the licenses granted Al-Hiwar Ettounsi TV and Nessma TV. Indeed, it would seem that UPL leader Slim Riahi, former owner of Ettounissiya TV, profits from Al-Hiwar Ettounsi TV, although the HAICA’s specifications prohibit politicians from owning the media. Similarly, the founder of Al-Hiwar Ettounsi, Tahar Ben Hassine, did not have the right to resell before three years as stipulate the [HAICA’s] specifications. As for Nessma TV, the most recent controversy, the ISIE’s banning of a Karoui & Karoui poster campaign, points to the station’s violation of regulations. In an interview with ISIE president Chafik Sarsar, a Nessma TV “journalist” admits, in her outburst, that the communications and advertising agency Karoui & Karoui is linked to Nessma TV which is prohibited under Article 8 of HAICA’s specifications [relative to private and public associations of the audiovisual sector]. This is not the only violation committed by company executives.

The cases of Zitouna TV and Radio Zitouna are even more intriguing. Owned by Oussama Ben Salem, member of the Ennahdha party’s Shura Council, the television station did not obtain a permit though it continues to deceive its audience by obscuring the reasons for its exclusion from media outlets authorized by the HAICA. Radio Zitouna, confiscated and appropriated by the State in 2011, has yet to pass into the authority of public service. This is what the HAICA and the SNJT addressed on December 3 in a letter to the presidency, demanding «to annex Radio Zitouna to the institution of national radio». Moreover, the same two institutions denounced the editorial line of this radio that «uses its religious programs as propaganda of an Islamist party».

Given the audacity of such media outlaws, one shouldn’t be surprised that these agencies so defiant of regulations have yet to show evidence of improvement as is also the case with their political counterparts. Instead one wonders about the adequacy of the legal and regulatory framework in the face of the communication issues of electoral campaigns. When discourse of hatred, prohibited by the electoral code, are not condemned because the candidates in question are in positions of authority, how can we expect any higher standards from journalists whose deviations from professionalism and ethical journalism are thusly validated? For here once again are the diatribes of a press that justifies its operations with the alternative logic that is necessary to derogate, through insults and denial, from the fundamental principles of deontology and democratic morals.

The “TAP family” is back!

Controversy of a distant era pitted three journalists, Nedra Boukesra, Salma El Heni, and Mouna Mtibaa, against their colleagues at the Tunisia-Africa Press Agency. The facts are presented in a letter authored by the three in question and addressed to the SNJT, the director of the AFP office in Tunis, and the regional director for North Africa and the Middle East. What follows is the letter in its near entirety:

«On Thursday, November 13, 2014, during an editorial meeting held at TAP to discuss the [HAICA] report on the media coverage of legislative elections by certain press agencies, of which the TAP is one agency… we discerned that the report was not objective and that observation criteria were not specific. But we contested the fact that the editorial management elected to respond to the report by publishing, on November 7, 2014, a piece signed “the editorial family” without several among us having been informed of its content and given that media coverage presenting the results of this report had been censored on November 6. On November 11, we addressed a letter explaining as much to the National Union of Tunisian Journalists. Our position appeared not to appeal to Mounir Souissi or, more precisely, to certain among his sponsors who deemed necessary to use him to pass along a clear message: we do not have the right to criticize either TAP’s publications or the agency’s editorial leadership! We were thus lynched and wrongly accused by this “journalist” who is disrespectful of the ethics of journalism and who had already attacked anonymously on online social networks. Publishing his comment on Facebook, Mounir Souissi had access to the “Like” of certain TAP “colleagues” whose affiliation with the former system is generally known. That he can express himself freely on his personal page is not the issue. That he accuse us of being the instigators of the report, violating the basic rules of deontology is a true problem.

We believe first of all that a journalist of the AFP office in Tunis does not have the right to intervene in the internal affairs of our agency. Secondly we reject the false conclusions he drew “after the investigations and cross referencing he carried out in the company of certain colleagues from TAP and other press agencies,” and we demand that he provide proof without delay. If Mounir Souissi handles information in the same way in which he undertook “his investigations” on “the paragraph concerning the evaluation of TAP coverage” which, according to him “was drafted within the Agency itself,” there is much to be said about his professionalism and the “burning” subjects he broaches. Regrettable is Souissi’s borrowing of terms once used by the former regime and still used today, justifying phrases such as “incapable little group of the Fascist left,” “Certain elements of this little group are manipulated by former journalists of the extreme left,” “this cowardly little group that slanders its own institution,” “this group of the extreme left that boasts its activism,” “the elements of this little group of questionable competence,” “the elements of this little group are afflicted by an incurable illness and animated by a blind and pernicious hatred,” “this little group emerged as TAP’s best francophone journalists left [the agency].” To conclude, we examine the statement, “Curse all extremists, of the left as of the right”! The “right” here is completely parachuted by this AFP “journalist” who apparently lacks peace of mind and who wishes to avoid being labelled, as he has always been, a puppet in the hands of power. In our opinion, the repetition (seven times exactly) of the diminutive nomenclature “little group” is revelatory, a lexicon borrowed from the jargon of the former regime to denigrate opponents or to impugn their motives.

Is this not some nostalgic reaction, a desire to return to the era of obstruction and censorship and the stifling stifle any dissident voice?

For us, Mounir Souissi is nothing but the voice of his masters who are, for now, in hiding but who are still watchful and waiting for the opportunity to take back the sector that we had believed immunized.

This AFP journalist’s assertion that “elements of this little group have become the source of dealing, banter, and ill will within the Agency” based on the fact that we expressed our opinion within TAP and that we have committed to informing the professional structure to which we belong (SNJT), demonstrate his professional “skills” to impose his personal interests upon the treatment of information in a media landscape marred by division and polarization.

We aim to draw attention to the fact that being labelled “elements of questionable competency, who lack any value in the work of the press agency and who have no chance of being recruited by other TAP agencies,” we have deliberately chosen to defend our agency, as, four years ago, we believed that change was possible… In matters that concern us, we deem Mounir Souissi’s gathering and handling of information to be in completely impartial. Competence for us is a synonym for a respect for the ethics of professionalism and the deontological code written on the back of the national press card:

● The journalist is committed to searching for the truth and sharing it with public opinion;

● Does not use his title or responsibility to serve personal interests

● Respects the opinions of his colleagues, refrains from slandering them, and acts in their company in a spirit of tolerance».

“Did they not swear?”

«Did they not swear, hand over heart, but a little late, that we would not return to the past?» asks activist Bahija Ouezini, who denounces the attacks on the university students who signed an anti-dictatorship testimonial published on Liberation.

This terrible rhetorical question aimed at journalists has been submerged by other totalitarian inflections and other violent mechanisms that portend the politico-media disaster to come.