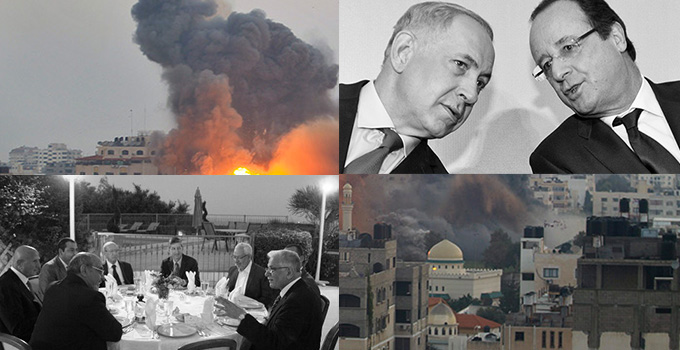 The pettiness of politics has sunk to the lowest possible grade when it becomes both the culprit and ineffectual mediator, responsible for and incapable of, producing a competent response to grave conflict, war, and/or genocide. That seven days of escalated attacks have come to 173 Palestinians including 37 children killed between July 8 and July 14, and at least 17,000 displaced civilians as of July 13 has further hardened Tunisian journalists against Tunisia’s political figures, condemning political parties for absorbing real-life issues into material for electoral campaigns, interim government officials for susceptibility to pressure from foreign powers, and the consequent lack of resolve and political will to extend any measurable gesture of support to Palestine.

And how can we be anything but harsh on politicians and government leaders? People are not the politics of their governments; in spite of the vast diversity of perspectives and opinions held amongst American, French, and Tunisian citizenries and the dissimilar roles of our governments, one need not be born outside of the United States, for instance, to recognize that the White House plays a part in the Israel-Palestine conflict, and in fact a US citizen mildly aware of his country’s international relations policies and politics likely knows and feels it with bitter poignancy. As peoples of distinct governments, our roles as citizens are different, our demands to government officials and politicians are different … but for many of us, Tunisians, Americans, French alike, the misgivings and confusion and frustrations boil down to the same questions: What is our part in the conflict and/or its resolution? Why are we as nations unable to demonstrate resolve and produce an effective response to ongoing violence between Israel-Palestine?

Division and Debt by Former Colonizers, Contemporary Imperialists
The severity and atrocity of the conflict transcends national boundaries and raises universally pertinent questions about national identity. In Tunisia, skepticism regarding the competency and «responsible governance» of the interim government in juxtaposition with Tunisia’s international image as the sole democracy of the Arab World has only become more pronounced over the past week as citizens sense that technocrats and politicians are incapable of rising above their own political and electoral trajectories to synchronize a national response to aggression that is tantamount to a Palestinian holocaust.

At this moment of revolution, of freedom, and of nacent ‘democracies,’ political families ‘in the name of an example in Tunisia’ did not succeed in uniting their efforts to better construct public intervention mechanisms. These political families did not succeed in collaborating on the fundamental structural reforms needed by public sectors, education, health…Since January 14, 2011, we, the people understood that what we have are parties propelled by electoral ambitions and event politics–not by responsible governance. Mandhouj Tarek, Division, Debt, the Absence of a Control Plan

In an apt response to a Nawaat article, one reader poses the underlying question as the sum of such political disonance and inteptitude.

According to the author, the countries invested in Tunisia’s democratic transformation are the same “former colonizers and contemporary imperialists” who are invested in supporting Israeli military operations. This has long been at the heart of criticisms against foreign assistance/intervention as a feature of economic recovery in Tunisia and is now, as Tarek and so many others explain, a primary reason for the apparent inability of the country’s political forces to mobilize support for Palestians:

Before January 14, 2011, these same parties explain their minimal or impossible mobilization by the existence of dictatorships allied with world powers that protect and finance Israel. Israeli military operations in Lebanon and against Gaza are largely financed by European and American taxpayers and by the riches exploited by major powers in Africa and elsewhere, directly or indirectly, regardless of form and formula. Tarek, Division, Debt, and the Absence of a Control Plan

The piece was posted in response to and builds upon «Sorry, Palestine,» in which the author attributes Tunisia’s unresponsiveness to party politics influenced by foreign powers.

What might be seen as passivity or apathy amongst Tunisian citizens regarding the conflict in Gaza is very much tied to the perception that politicians appropriate any spontaneous popular movement or issue as propaganda for electoral campaigns. Samih Beji Okkez, Sorry Palestine

Journalists have been particularly watchful when the country’s political figures convene with international leaders — the same Nawaat author recalls the well-documented embrace of former Prime Minister Hamadi Jebali and Senator John McCain, and in the same vein mentions the more recent and equally scrutinized event in which number of Tunisian officials attended iftar hosted by American ambassador Jacob Walles. But in the latest escalation, no foreign figure in Tunisian media has been as heavily branded for Western meddling and ill-inspired intervention as French President Francois Hollande.

The French media was admittedly the first to pin «this systematic alignment with the Israeli position» before the surprisingly powerful firestorm of Arab media obliging the French president to redeem himself by calling Mahmoud Abbas to demand an «end to the violence.» Too little too late! Imed Bahri, Is the Future of Tunisians Determined in Foreign Embassies?

By Tunisian media standards, François Hollande has unarguably assumed the leading role of ‘former colonizer, contemporary imperialist’ as an outpouring of criticism from journalists and politicians decries his recent phone conversation with Israeli Prime Minister Benyamin Netanyahu, in which the former asserted France’s solidarity against and firm condemnation of rocket fire from Gaza and commented that «it is up to the Israeli government to undertake all measures to protect its population against threats.» The author of a Tunisie Numerique article condemns the President’s alleged Zionist alignment, much as he condemns the international community’s silence, as a political tactic to gain electoral support; La Presse de Tunisie reported that «The Political Class Steadfastly Condemns,» conveying Tunisian politicians’ distaste for Hollande’s affirmations in their support of a boycott of Bastille Day celebrations in Tunis that was initiated by the National Union of Tunisian Journalists (SNJT); meanwhile the President of the National Constituent Assembly Mustapha Ben Jafaar articulated his own position against Israel’s retaliation in a direct address to the French President.

…the stars of an ‘iftar’ will be seen as ‘traitors’ to the Palestinian plight, and this, we can only imagine, is by no means an asset for the next electoral campaign, and especially for the presidency. Bahri, Is the Future of Tunisians Determined in Foreign Embassies?

Tunisan media’s resounding message tells of interventionism thinly veiled as diplomacy. The almost theatrical timing of defining American and French holidays, July 4 and July 14 respectively, did not pass unnoticed by journalists. The coincidence—-that the ambassadors of the two most infamously-invested-in-Israel countries hosted, a mere ten days apart, a gamut of Tunisian political figures-—is appreciated in measure with its symbolism of the interim government’s malleability in the hands of the bearers of foreign interventionism: «This [sort of diplomacy] is valid for those who respect themselves and respect their people and the national flag. But for these leaders ‘fabricated’ in the laboratories of think-tanks and Western embassies, it would be difficult to not hasten to the beck and call of the new world leaders.»

At the end of any of these discussions—-in American, French, or Tunisian media—-we witness the same continual bouts of violence in Gaza, we confront the same internationally charged conflict with the same sense of impotence and immobility, come to the same core questions that Tarek captures in Division, Debt, Absence of a Control Plan. While the context is vastly different in every country (an analogous article issuing from occidental media might bear the modified title Complicity, Interventionism, Absence of a Control Plan), the most relevant, practical question is invariable: How do we-—Arabs and Westerners, citizens of distinctive countries and citizens of the world—-contribute positively to Israeli aggression against Gaza? What is it about national politics that prevent us from responding effectively and resolutely as nations and coalitions of nations to a conflict that has only degenerated over time? As we remain undecided and divided, the irreversible and irreparable diminishing of an entire people is underway.