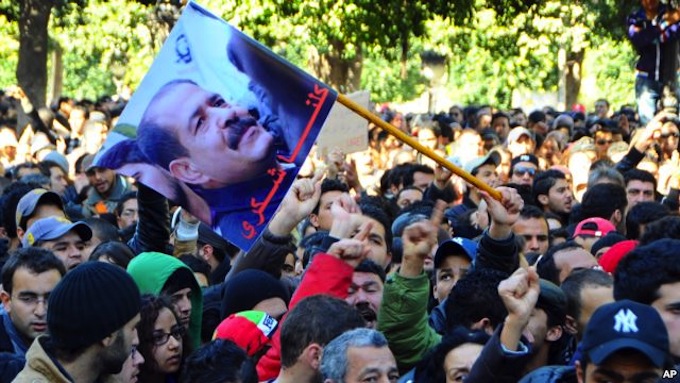 Suspicions and rumors that materialized immediately after the death of Chokri Belaid in February 2013 have swelled since the Raoued Plage and Borj Louzir operations last week into potent sense of injustice that has carried many into a collective demand for the truth about Chokri Belaid’s assassintion. The strange timing of security operations that resulted the death of Belaid’s presumed assassin Kamel Gadhgadhi as well as the capture of the principal suspects of Mohamed Brahmi’s death has re-ignited speculations and concerns about the government’s complicity in both political assassinations. Tunisian news in the past week is tinged with renewed cynicism about the corruption of political leaders and, in turn, doubts about the integrity of the country’s “democratic” transition.

On Thursday, February 13, the Initiative for Research about the Truth of the Assassination (IRVA) plus fourteen associations composed of lawyers in support of the committee’s objectives gathered to petition to press charges against the government. Participants holding up images of Belaid and signs reading “Who killed Chokri?” gathered in El Teatro (the location of IRVA’s first public appearance on April 25, 2013) on the capital’s busy Bourguiba Street to sign in support of the claim filed with the African Commission on Human and Peoples’ Rights.

The collective has accused the Ministry of the Interior of willingly hiding truths about the murder, pointing to its failure to conduct a thorough and transparent investigation of Belaid’s case. Besma Khalfaoui, founding member of IRVA and the wife of Belaid, explained that the committee is collaborating with human rights NGOs to get the petition presented to the African Court on Human and Peoples’ Rights. Khalfaoui stated that “The goal of this initiative is nothing more than to expose the true conspirators of the murder: the ones who planned, financed, and executed it.”

Public scrutiny about government culpability in political violence is set against general concern about government capability to accomplish its goals before the end of the year. National news is often presented with bitter sarcasm and caricatures of the political scene. Aside from security issues, the activities of Prime Minister Jomâa are a common target for skepticism. In his article about Pressing Issues Forgotten by the Government, La Presse de Tunisie journalist remarks, “It is, of course, nice to take a stroll along Avenue Habib Bourguiba on Saturday afternoon chatting with citizens; this allows one to stretch his legs and taste the sweetness of stardom that comes with power. But it hardly engenders good politics.”

In another article, The Two Faces of Government: External Glow, Internal Tergiversation, the same journalist makes the distinction between appearances and actions, pointing out that while the Prime Minister makes his diplomatic rounds to Algeria, Morocco, and soon Tripoli, there remains the lofty task of setting up elections. “The new electoral law must define electoral districts, the electoral body, its scope and limitations, the voting system, types of elections, timing, etc.. The lack of diligence that one observes on this level is worrying.”

Aside from the media, political figures and analysts are also vocalizing serious concern about the urgency of election-planning. Catastrophe will ensue, predicts Chafik Sarsar, President of the Independent High Authority for Elections (ISIE), if elections are not carried out by the end of 2014. Sarsar anticipates that Tunisians will lose confidence in both the elite and in the electoral process if goals are not met. He calls upon all administrations and political players to support an efficient decision-making process. According to Sarsar, experts say that elections could be organized within a period of twenty-two to thirty-two weeks, depending upon the nature of elections –whether presidential and legislative elections will be organized independently or concomitantly — which in turn depends on decisions made about the electoral code. Each decision, of course, means money and time.

The threshold of tolerance is not the same. Observation missions will monitor every action taken in the proceedings, the campaigns, financing, and dirty money. We will all strive for the ideal of institutionalizing free, honest, transparent, democratic elections.
Chafik Sarsar

Another week in Tunisia’s politics is charged with mixed emotions. For now, in light of the unresolved and reinvigorated confusion surrounding the Belaid case and the elusive progress being made in election-planning processes, public demands for truth, accountability, and productivity reflect a citizenry eager for change, and still waiting for signs of it.