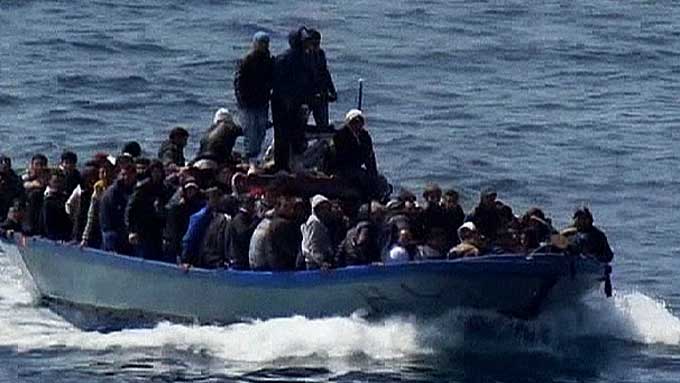 The controversial affair of the Tunisian migrants lost at sea during the months of March, April and May 2011, continues to perplex Tunisian authorities as well as those on the Italian peninsula. This article aims to give a chronological account of the key facts surrounding this affair and to outline the current obstacles preventing the resolution of this riddle in an attempt to get nearer to the truth of the fate of the missing Tunisian migrants.

From March 2011 onwards, 300 Tunisian families have had no news from their sons since they departed from the coast of Tunisia in the direction of Italy, hoping to find a more dignified and prosperous existence.

However, some family members, for example the mother of one young man lost at sea by the name of Ibrahim Bouthouri, from the town of Elkabareya in Tunis, claim to have identified their sons in an image lifted from a video broadcast by the news programme TG5 on the Italian channel Canale 5.

Mrs Latifa Chouikh, from Hammam-Lif says she received a text message from her son Sabri on 29 March 2011 at 3:09 upon his arrival at the coast of Lampedusa, Italy.

For his part, Mr Azouz from Naassen in Tunis claims to have received a phone call during which his son informed him that he had been detained at the Trapani Prison in Sicily and that he had been sentenced, along with a group of his Tunisian compatriots, to a year and a half in prison. He mentions too Foued Ben Brahim, a young man from Hammam-Lif who also headed out to sea with a group of young Tunisians.

An agreement was reached on 5 April 2011 between the Minister of the Interior Habib Essid and his Italian counterpart Roberto Maroni, the latter being a member of the far-right “Northern League” (Lega Nord) which has previously warned the Italian public against what it described as a “human tidal wave”.

According to a statement made by Beji Caid el Sebsi, Prime Minister of the provisional Tunisian government, on 5 April 2011, the Italian authorities agreed to provide legal status for the 22,000 illegal immigrants, with a Schengen visa, valid for three months. But 800 people have been returned to the Tunisian authorities and el-Sebsi has not, for all that, specified the criteria according to which these 800 people were excluded.

In the month of October 2011, an appeal was sent to the Italian and Tunisian authorities to ask them to carry out a fingerprint check. In Italy, the appeal was supported by the 2511 collective (venticinqueundici), a feminist collective created on 25 November 2005 in Milan, whose aim is to fight against acts of violence suffered by migrants in temporary detention centres. And it was through this group that the campaign “Da una sponda all’altra: vite che contano/From one shore to another, lives which matter” was born.

In April the authorities let them know that the check was nearly complete, but the Tunisian authorities have not yet relayed any information, either partial or complete, to these families. Indeed, the Tunisian government hasn’t even provided a list of those people whose fingerprints were sent to Italy.

Meanwhile, three of the mothers of these young Tunisians have attempted to commit suicide, among them Jannet Rhimi, the mother of Wissem who went missing on 29 March 2011. She tried to set fire to herself on 21 April 2012 in protest at the deafening silence of those tasked with looking into this case. As a result, she suffered serious burns:

On 16 May 2012 the Italian President Giorgio Napolitano, in a visit to Tunisia, met, for a period of a few minutes, several mothers of the young men who had gone missing. It remains difficult to find out what exactly he said to them since, according to the Tunisian newspapers, he is said to have made three quite contradictory statements:

To regret the disappearance of these young men seems to imply that they are dead, while his commitment to look for them suggests they could still be alive, and then what is this “drama” of which Mr Napolitano speaks?

According to a few Italian newspapers, he apparently told the families that the fingerprint checks yielded negative results.

Now, after several meetings between the families of the missing and the 2511 collective, a number of clear demands have been formulated and addressed to the Tunisian and Italian authorities.

A press conference at which a representative from each of the Tunisian and Italian governments will communicate the results of the fingerprint checks to the the families. This is the only way in which all the families will be able to know the results.
The publication of a list of names of those whose fingerprints have been processed. Because, as far as we, and these families, are concerned, these fingerprints do, in fact, belong to human beings, sons and young men who have names, ages, ambitions and their own stories and characters. Human beings then, not fingerprints. Up until now, nobody has deigned to communicate to these families the names of these human beings, these sons whose fingerprints have been sent off, meaning that every family can continue to believe that these “negative results” don’t apply to their sons.
A more in-depth inquiry into the last telephone calls received by the families after the departure of their children. We know that a judge in Tunisia is making inquiries into this matter and that phone calls were made to and from numbers linked to the telecoms company Tunisiana. In the dossier which we have compiled with these families are set out clearly the precise numbers, days and approximate time of the telephone calls. We demand that the company makes public all the necessary information so that we can determine the location of these calls. It is absurd that one year on, no investigation into this information has even been launched. In the same way that it is absurd that not one state official is fully up to speed with the contents of the dossier which we have put together.
The cross-comparison of images broadcast on Italian and French news bulletins in which the families recognise their children and the photos of these young people. This type of check, it should be said, could have been carried out from the very beginning if the suffering of the families had been taken into account.

The families of the missing people, alongside militants/activists from the 2511 group and other Tunisian and foreign activists took to the streets on Monday 9 July in a protest outside the Tunisian Ministry of Social Affairs. The next day, the families were received by Houcine Eljaziri the Secretary of State for Immigration and Tunisians Abroad, who stated that the results of the fingerprint checks were negative, with the exception of 9 cases which, in any case, related to a group of people who left Tunisia in 2010. He said that an inquiry had been opened into this case, without specifying exactly which elements were being looked into, for how long, and whether this investigation had produced any concrete results.

On 13 July 2012, the 2511 group met with a Tunisian lawyer and asked him to make inquiries into the investigation opened by the Secretary of State and to provide legal representation to the families of the missing people in their request to access the databases of Tunisiana. This so that they can attempt to geolocate the calls and the text messages received by the families from their loved ones, knowing that a team of experts from Golden Smith College will, once this information has been gathered, try to provide satellite images of the scene at the time the calls were made. Such information would be a crucial element in the investigation and the lawyer willingly agreed to take care of the matter and is now waiting for authorization from the families of the missing people.

The last and most recent meeting between the 2511 group and the families of the missing has taken place, during which the group of Italian activists told the families that the Canale 5 video had been taken before the first of their relatives left Tunisia, and that the results of the fingerprint checks were negative. The Italians also said that despite the possibility of these young immigrants having passed through Lampedusa without having their fingerprints taken, the theory that they might be in secret detention centres is very unlikely given the vigilance of Italian civil society.

However, the families of the missing continue to insist that “el Sebsi has sold off and given up on their sons”.

Meantime, a number of the families, in a move which spoke of their despair, traveled to the recent Ennahda conference to demand that the party call upon the State to act so that they might finally learn the truth concerning the disappearance of their young ones. On the first attempt, they were prevented from meeting the Prime Minister Hamedi Jebali, also Secretary General of the ruling party, a move which provoked the anger of these mothers.

To calm them down, a public relations representative from Ennahda spoke to them, pointing to the likelihood of the deaths of the missing men but saying that it was important to remain hopeful. He also stated that this was a matter for Beji Caid el Sebsi and his government, and that the current government has, and will do, its utmost to help the progression of this case, without actually giving any details of the measures that were being taken.

This dramatic affair raises a lot of questions about the true fate of those young Tunisian migrants. Did they arrive in Italy or did they die at sea? Each theory sparks further questions, especially when we consider the fact that this wave of illegal Tunisian emigration began at the same time as two military operations against the Libyan regime were ongoing in the middle of the Mediterranean: Operation Odyssey Dawn conducted by the US and Operation Unified Protector carried out by NATO.

Translation by Christopher Barrie from the original French article.