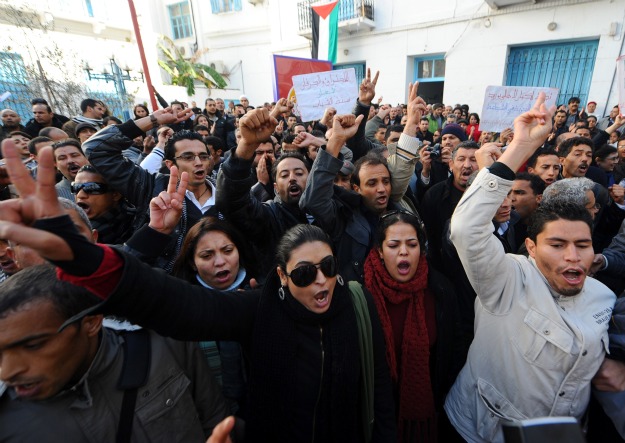 January traditionally has been Tunisia’s month for political drama — a general strike in January 1978; a Libyan-supported insurrection in January 1980; bread riots in January 1984. This year, however, January will be hard-pressed to top the previous December. The last two weeks of 2010 witnessed the most dramatic wave of social unrest in Tunisia since the 1980s. What began with one young man’s desperate protest against unemployment in Sidi Bouzid, in Tunisia’s center-west, spread quickly to other regions and other issues. Within days of Mohamed Bouazizi’s attempted suicide in front of the local government office, students, teachers, lawyers, journalists, human rights activists, trade unionists, and opposition politicians took to the streets in several cities, including Tunis, to condemn the government’s economic policies, its repression of all critics, and a mafia-style corruption that enriches members of the president’s family.

In a country known for authoritarian stability, it is easy to see this unrest as a harbinger of dramatic change. In fact, the protests have been building for at least two years. The frustration is rooted in a deep history of unbalanced economic growth. Several organizations have helped to convert this frustration into collective protest. To date, the December protests have produced a cabinet reshuffle, a governor’s sacking, and a renewed commitment to job creation in disadvantaged regions. Whether they lead to more dramatic change remains to be seen. If Ben Ali’s rule is not in immediate danger, the protests at least suggest that his governing strategy is in serious trouble.

Ben Ali’s rule has relied on a skillful combination of co-optation and repression. By pledging his fidelity to democracy and human rights early in his tenure, he deftly hijacked the core of the liberal opposition’s message. At the same time, he used electoral manipulation, intimidation, and favors to co-opt leaders of ruling-party organs and civil society organizations. Those who remained beyond the reach of these tools felt the force of an internal security apparatus that grew dramatically in the 1990s. Most Tunisians grudgingly accepted Ben Ali’s heavy-handedness through the 1990s. Authoritarian rule was the price they paid for stability that could attract tourists and investors. Ben Ali was an effective, if uncharismatic, technocratic who beat back the Islamists, generated growth, and saved the country from the unrest that plagued Algeria.

Over the last five years, however, the fabric of Ben Ali’s authoritarianism has frayed. Once it became clear that the Islamists no longer posed a serious threat, many Tunisians became less willing to accept the government’s heavy-handedness. The regime also lost some of its earlier deftness. Its methods became less creative and more transparently brutal. The government seemed less willing to at least play at any dialogue with critics or opposition parties. Arbitrary arrests, control of the print media and Internet access, and physical attacks on journalists and human rights and opposition-party activists became more common. So, too, did stories of corruption — not the usual kickbacks and favoritism that one might expect, but truly mafia-grade criminality that lined the pockets of Ben Ali’s wife and her family. The growth of Facebook, Twitter, and a Tunisian blogosphere — much of it based outside the country — made it increasingly easy for Tunisians to learn about the latest arrest, beating, or illicit business deal involving the president’s family.

Shortly before the December protests began, WikiLeaks released internal U.S. State Department communications in which the American ambassador described Ben Ali as aging, out of touch, and surrounded by corruption. Given Ben Ali’s reputation as a stalwart U.S. ally, it mattered greatly to many Tunisians — particularly to politically engaged Tunisians who are plugged into social media — that American officials are saying the same things about Ben Ali that they themselves say about him. These revelations contributed to an environment that was ripe for a wave of protest that gathered broad support.

Tunisia has built a reputation as the Maghreb’s healthiest economy since Ben Ali seized power, as market-oriented reforms opened the country to private investment and integrated it more deeply into the regional economy. Annual GDP growth has averaged 5 percent. But the government’s policies have done little to address long-standing concerns about the distribution of growth across the country. Since the colonial period, Tunisia’s economic activity has been concentrated in the north and along the eastern coastline. Virtually every economic development plan since independence in 1956 has committed the government to making investments that would create jobs and enhance living standards in the center, south, and west. Eroding regional disparities would build national solidarity and slow the pace of urban migration. The latter became a particular concern as social protest organized by trade unionists, students, and Islamists mounted in the late 1970s and early 1980s.

Government investment transformed the countryside in terms of access to potable water, electrification, transportation infrastructure, health care, and education. But the government never succeeded in generating enough jobs in the interior for a rapidly growing population. In fact, two aspects of the government’s development strategy actually made it harder to generate jobs. First, Tunisia’s development strategy since the early 1970s has relied progressively on exports and private investment. For a small country with a limited resource base and close ties to Europe, this strategy generated an emphasis on tourism and low-skilled manufactured products (primarily clothes and agricultural products) for the European market. Scarce natural resources, climate constraints, and the need to minimize transport costs make it difficult to attract considerable numbers of tourists or export-oriented producers to the hinterland. Consequently, 80 percent of current national production remains concentrated in coastal areas. Only one-fifth of national production takes place in the southwest and center-west regions, home to 40 percent of the population.

Education issues complicate matters further. The Tunisian government has long received praise for its commitment to broad education. The prevailing culture holds up university education as the key to security and social advancement. However, universities do not produce young people with training that meets the needs of an economy that depends on low-skilled jobs in tourism and clothing manufacturing. This mismatch between education and expectations on the one hand, and the realities of the marketplace on the other, generates serious frustrations for young people who invested in university educations but cannot find commensurate work. The challenge is particularly dire for young people in the interior. While estimates of national unemployment range from 13 to 16 percent, unemployment among university graduates in Sidi Bouzid ranges between 25 and 30 percent.

The trade unions’ role is one of the most striking aspects of the December protests. The government worked very hard, and with great success, to domesticate the Tunisian General Labour Union (UGTT), Tunisia’s sole trade union confederation, in the 1990s. More recently, however, activists in some unions have succeeded in taking a more independent and confrontational stance. In 2008 and again in early 2010, union activists organized prolonged protests in the southern Gafsa mining basin. The players and the grievances in those cases resemble what we saw in late December. Education unions, some of the most independent and aggressive within the UGTT, played a critical role in organizing unemployed workers, many with university degrees, who protested the government’s failure to provide jobs, its corruption, and its refusal to engage in meaningful dialogue. Human rights organizations, journalists, lawyers, and opposition parties then joined in to criticize the government’s restrictions on media coverage of the protests and the arrests and torture of demonstrators. In this way, a broad coalition of civil society organizations has connected bread-and-butter employment grievances with fundamental human rights and rule-of-law concerns. They also pull together constituencies that transcend class and regional distinctions — unemployed young people in Sidi Bouzid, Menzel Bouzaiene, and Regueb, and lawyers and journalists in Monastir, Sfax, and Tunis.

It is too early to know if these protests signal the beginning of the end for Ben Ali. However, Tunisia’s current political scene looks a bit like it did in 1975 and 1976, the beginning of the long slide for Ben Ali’s predecessor, Habib Bourguiba. Again, we see an aging president who seems increasingly out of touch and whose ability to co-opt and repress has deteriorated. We still see a political system that lacks strong possible successors and a clear mechanism for selecting one. We have a set of economic and political grievances that enjoys the support of a range of civil society organizations, including some with the ability to mobilize considerable numbers of protesters. Over the medium and long terms, this is the most significant aspect of the December protests. The fact that unemployed young people took to the streets is much less important than the fact that their cause has been taken up — and supplemented — by civil society organizations that spent most of Ben Ali’s rule under his thumb or too cowed to act.

Despite all this, it is important to recall that Bourguiba did not fall suddenly to a mass movement that rallied broad popular support. His government rotted steadily for more than a decade. Additionally, Ben Ali’s bloodless coup and his subsequent rule took great advantage of the disorganization in Tunisia’s political class. Tunisia’s civil society, including the opposition parties, is notoriously easy to divide and conquer. If Ben Ali’s ability to repress and co-opt has deteriorated, it has not disappeared. With the December protests, Tunisia might have turned an important corner. However, nothing in the country’s history or its current state of affairs makes it easy to believe that the protests will lead quickly to a coherent, unified opposition movement with a clear message, a charismatic leader, and a national support base. Additionally, another long, slow slide toward chaos could simply set the stage for another Ben Ali — another unelected president who seizes power at the top and changes little below it.

Christopher Alexander is Davidson College’s McGee director of the Dean Rusk International Studies Program, an associate professor of political science, and author of Tunisia: Stability and Reform in the Modern Maghreb.