In 2019, the World Wildlife Fund (WWF) estimated that 600,000 tons of plastic waste are dumped annually in the Mediterranean. Tunisia ranks in the top nine biggest polluters, contributing10,000 tons each year, Business Insider France reported. These alarming numbers as well as the ongoing debate gave way to the emergence of several national civil society organizations (CSOs) which adopted an environmentalist mission aiming to raise awareness about the severity of the crisis and to mobilize citizens to participate in curbing the harmful impact of this plague. While Tunisian national and local authorities often turn a blind eye to this issue, grassroot initiatives and organizations team up to implement joint projects and campaigns. Oceanis is one CSO that set out to warn about the urgency and importance of protecting the marine environment in Tunisia. 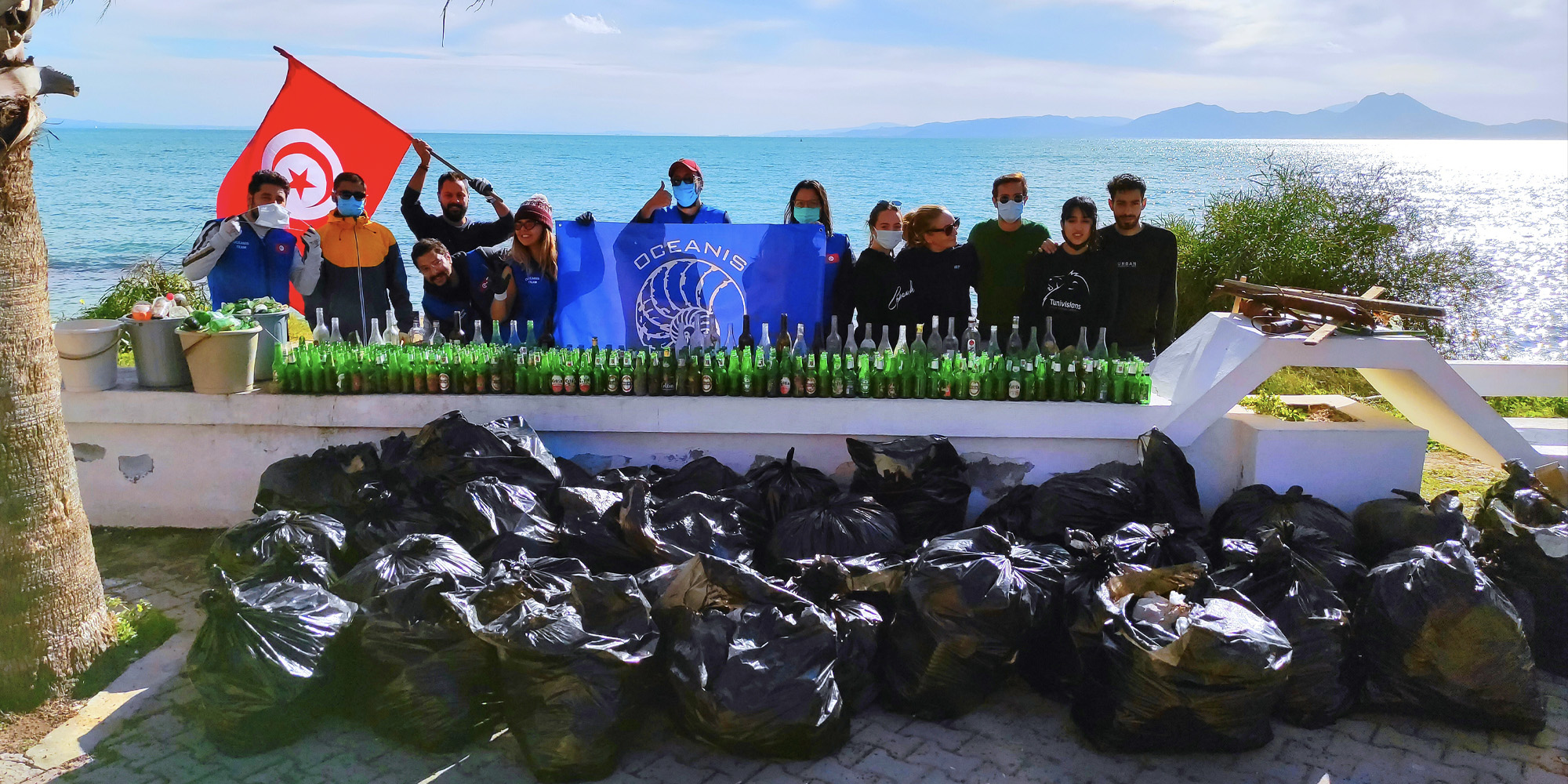 Launched in 2020, this national initiative has organized around 45 cleaning campaigns covering several areas mainly in the northern and southern suburbs of Tunis and on the island of Djerba. Collected waste has included plastic trash (bottles, bags, straws, food packaging etc.), fishing nets, glass bottles, cans and even construction waste. The estimated amount of non-recyclable waste collected by Oceanis members and volunteers was 80,000 cubic liters in 2020. In the same year, recyclable waste collected amounted to 20,000 cubic liters and all of it was recycled following the field campaigns. Between June 2020 and June 2021, some 1,200 volunteers joined these campaigns including German, French, American, Japanese, Algerian and Moldovan residents in Tunisia. 8% of participants were children. As far as the impact of the cleaning campaigns is concerned, the immediate effect on the cleaned areas is sometimes short-lived as waste tends to accumulate again, especially in places that attract visitors from outside the area. In the long-term, however, concerned municipalities have started to show more commitment, organizing regular cleaning campaigns themselves. In explaining this reaction, Oceanis members reported that their efforts almost highlighted the failure of the municipalities to handle the responsibility of cleaning the beaches and preventing more damage. Remarkable impact is also being achieved on social media platforms where the outreach of the content featuring the cleaning campaigns is widespread. Through these networks, the organization seeks to reach as many screens as possible and to sensitize its audience to the severity of the issue. In addition to bypassers who spontaneously join cleaning campaigns in the field, hundreds of volunteers have become involved as a result of Facebook events and publications. 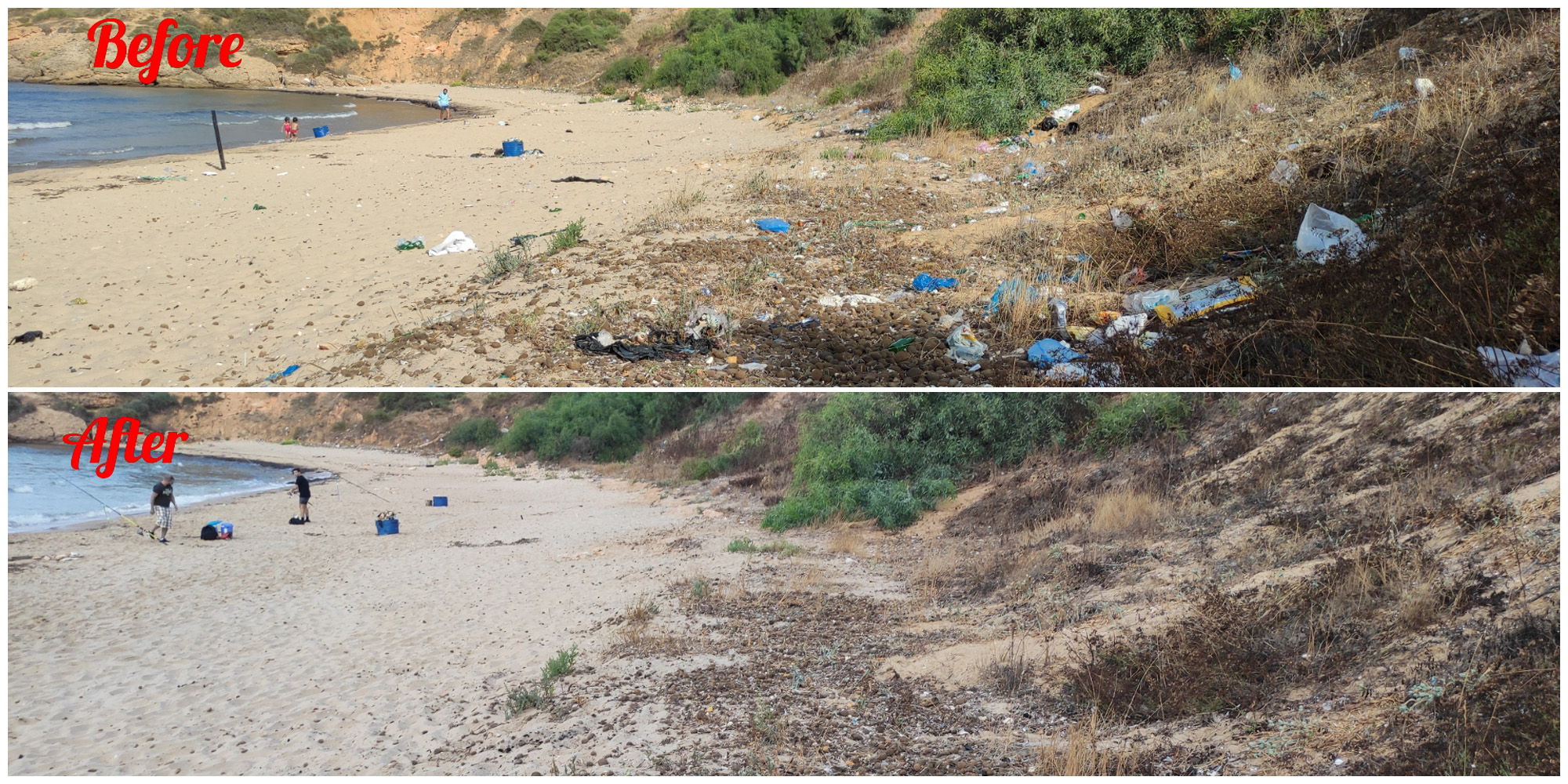 Besides Oceanis, several other national organizations have invested tremendous efforts in marine conservation. Notre Grand Bleu is another CSO based in the governorate of Monastir which focuses on the island of Kuriat. In a 2021 documentary entitled ‘Ghazwa’, the CSO reported that marine pollution at the coasts of Monastir does not only consist in consumer product waste, but even includes plastic fishing gear. On their underwater expeditions, the CSO team members found an estimated 250,000 plastic fishing traps left behind at the bottom of the sea when they were no longer useful. The presence of this gear  in the habitat of marine creatures represents a great danger for marine biodiversity as sea animals are killed off over the years, a phenomenon known as ‘ghost fishing’. It is indisputable that the marine environment and biodiversity in Tunisia face a multifaceted threat. For this reason, civil society organizations that focus on marine protection have created a network of individuals and associations whose work is centered around this common mission. A distinct spirit of collaboration characterizes this network within which joint action plans, projects and initiatives are designed and implemented. In this context, Oceanis teamed up with Tunisie Recyclage, a CSO working on recycling, to organize several cleaning campaigns after which all recyclable waste was reprocessed. The number of Tunisians who show interest in consolidating the work of environmentalist civil society is slowly growing, and so is their awareness about their roles both as individuals and in a group context. On the other hand, the role of the national and local authorities with regard to public outreach and organizing structured cleaning initiatives and sustainable waste management still does not match the gravity of marine pollution. Municipalities usually settle for picking up the waste after each CSO-organized field campaign, sometimes providing large plastic bags—yet another major pollutant—for these activities.

Although the efforts of civil society organizations have ushered in clear improvements, a higher level of environmental intervention must be achieved within the framework of a national action plan. This can be realized through establishing local, tight-knit recycling systems and introducing laws that regulate waste management. In the longer term, one sustainable solution would be to implement civic education programs in primary schools, which will incite pupils from a younger age to adopt the mindset of environmental conservation and protection. Children would be brought up to acknowledge their role as citizens who can contribute individually or in groups to achieving collective goals. Future Tunisian citizens can thus become active participants rather than mere consumers. Such a strategy might curb the effects of the marine environment’s degradation. It might also help prevent the extinction of marine species that are gradually being replaced by plastic bags drifting in the sea.

Under Surveillance: Testimony from a Global South migrant in Tunisia