On Monday, November 8, Abdelrazek Lachhab, an environmental activist from Agareb, an agricultural suburb outside Sfax, died after police used tear gas against those protesting the nearby dump and calling for its closure.

The Ministry of Interior released a statement on its official Facebook page denying allegations that police killed Lachhab and claiming that Lachhab had passed away in his home, six kilometers away from the protest. Lachhab’s family and friends who were with him the moment he collapsed outside in the street, while police were firing tear gas against protesters, refute the denial from the Ministry of Interior. 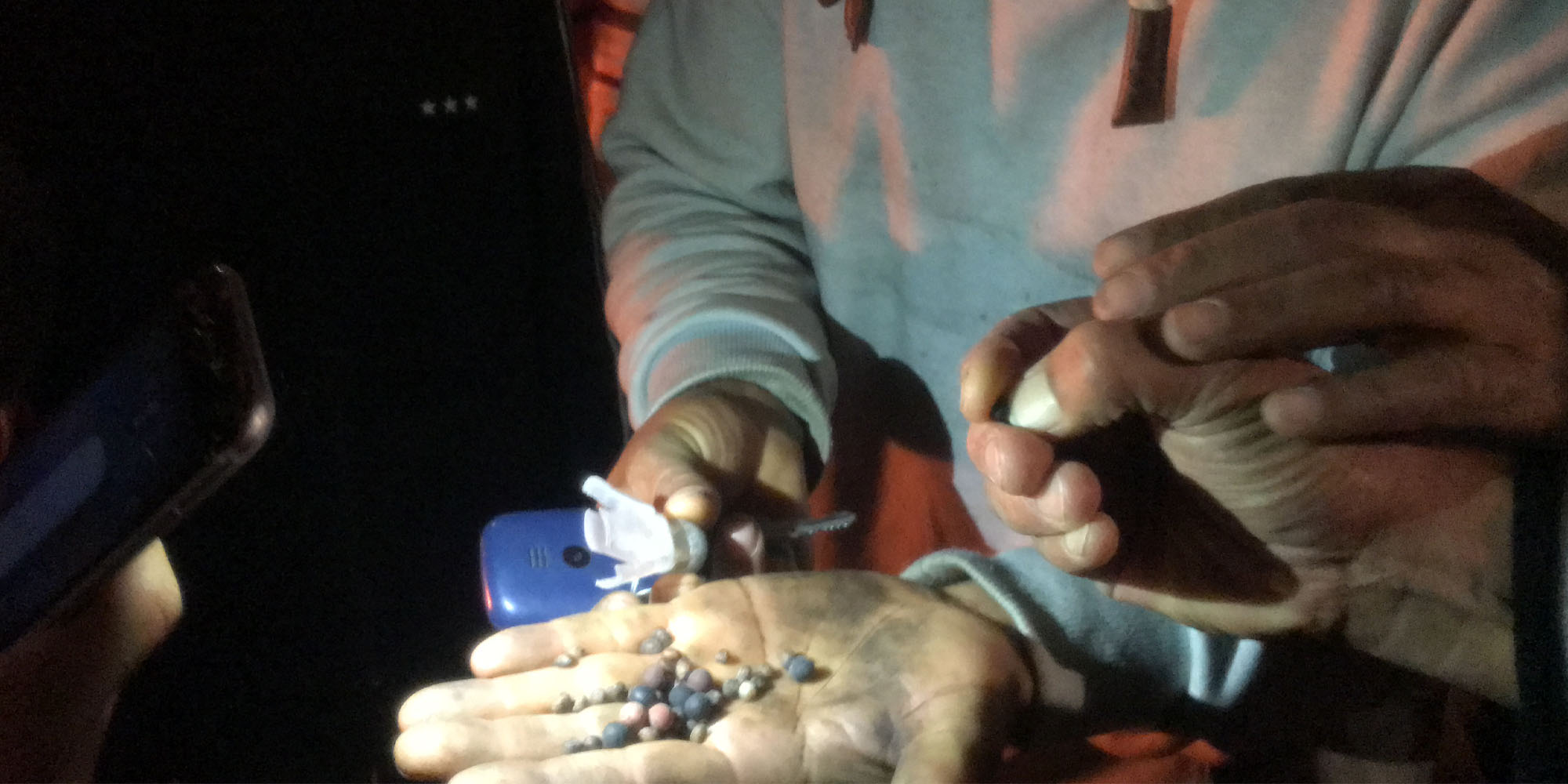 “My cousin was the victim of a systematic killing by the state, all because people went out to protest their right to a healthy environment,” Zoubeir Lachhab, 28, a cousin of the deceased Abdelrazek Lachhab told Meshkal/Nawaat on November 10 in Agareb.

“My cousin died from [tear] gas inhalation…in this same spot,” Lachhab, said in the city center, six kilometers away from the dump site. “They hit us with tear gas, lots of tear gas, directly at us and at the back so we cannot run away… Some people were able to escape but those who were targeted directly, like my cousin, became victims,” said Lachhab, his voice hoarse, barely a whisper after shouting during recent protests.

Multiple people that Meshkal/Nawaat interviewed in Agareb repeated a phrase that summed up their experience with the dump, its fumes, and the response of officials: “We can’t breathe.”

Locals say that when the landfill in the Guana neighborhood of Agareb was opened in 2008, an official signpost indicated it would be closed within five years, by 2012. Now, nearly 14 years later, the dump is still in use. Agareb locals protested in 2019 and launched a campaign called “Manich Msab” -“I am not a dump” in Tunisian dialect- which ended on July 11, 2019 when they received a court order in favor of their demand to shut down the dump. 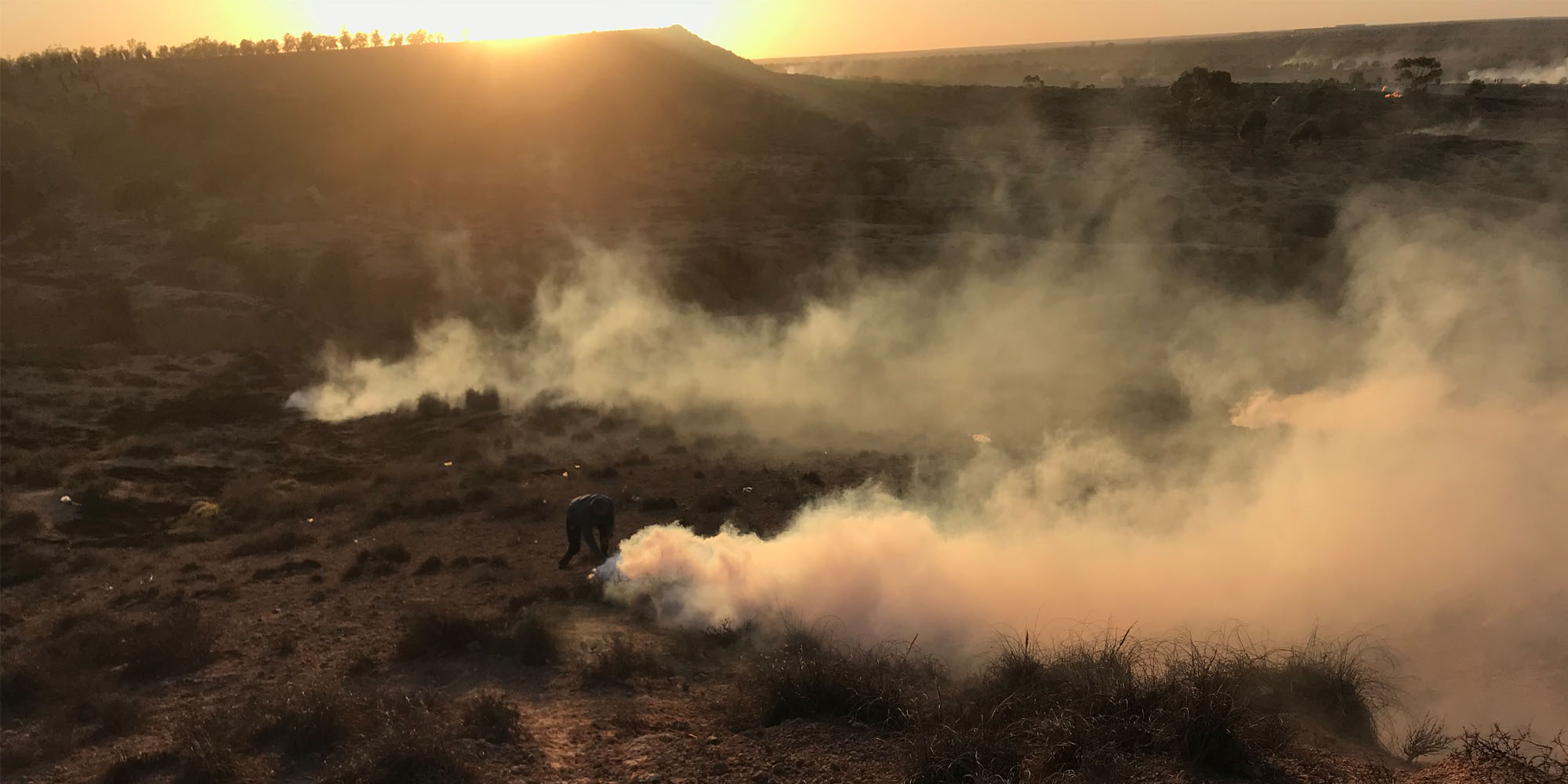 The Ministry of Environment has since filed an appeal to this decision. The new Minister of Environment Leila Chikhaoui stated during her visit to Sfax on October 27: “We do not have a magic stick to solve the inherent waste issue in Sfax” and that “we will be diagnosing temporary waste accumulation sites with all health and environmental guarantees ensured”. But instead of waiting on the courts, soon after these statements, the ministry issued an order on November 9 for the dump to resume its operations in order to alleviate the overflowing waste crisis in Sfax. But people in Agareb believe the dump isn’t for the benefit of the whole region, that it mainly serves the richer people living in the city of Sfax at their expense.

People living in the areas surrounding the dump expressed their frustration over the excessive use of force by police, which went on for days and made them feel unsafe. “Look at my son. He’s 10 and he has been suffering from asthma since birth because of that dump,” said one woman living in a neighborhood a few meters away from the dump site who declined to give her name.

“We keep wearing long sleeves and socks even in hot weather, just to protect us from lethal mosquito bites,” another man who did not give his name interjected. Locals claim that a young girl died last year after contracting black fungus disease because an insect stung her in the face. “It is all because we live in a space full of diseases where even black fungus exists,” Lachhab told Meshkal/Nawaat. “When the toxic waste leaks into our water table, the son of my grand-son will be affected…This city will turn into Chernobyl, that’s what they want for us”. 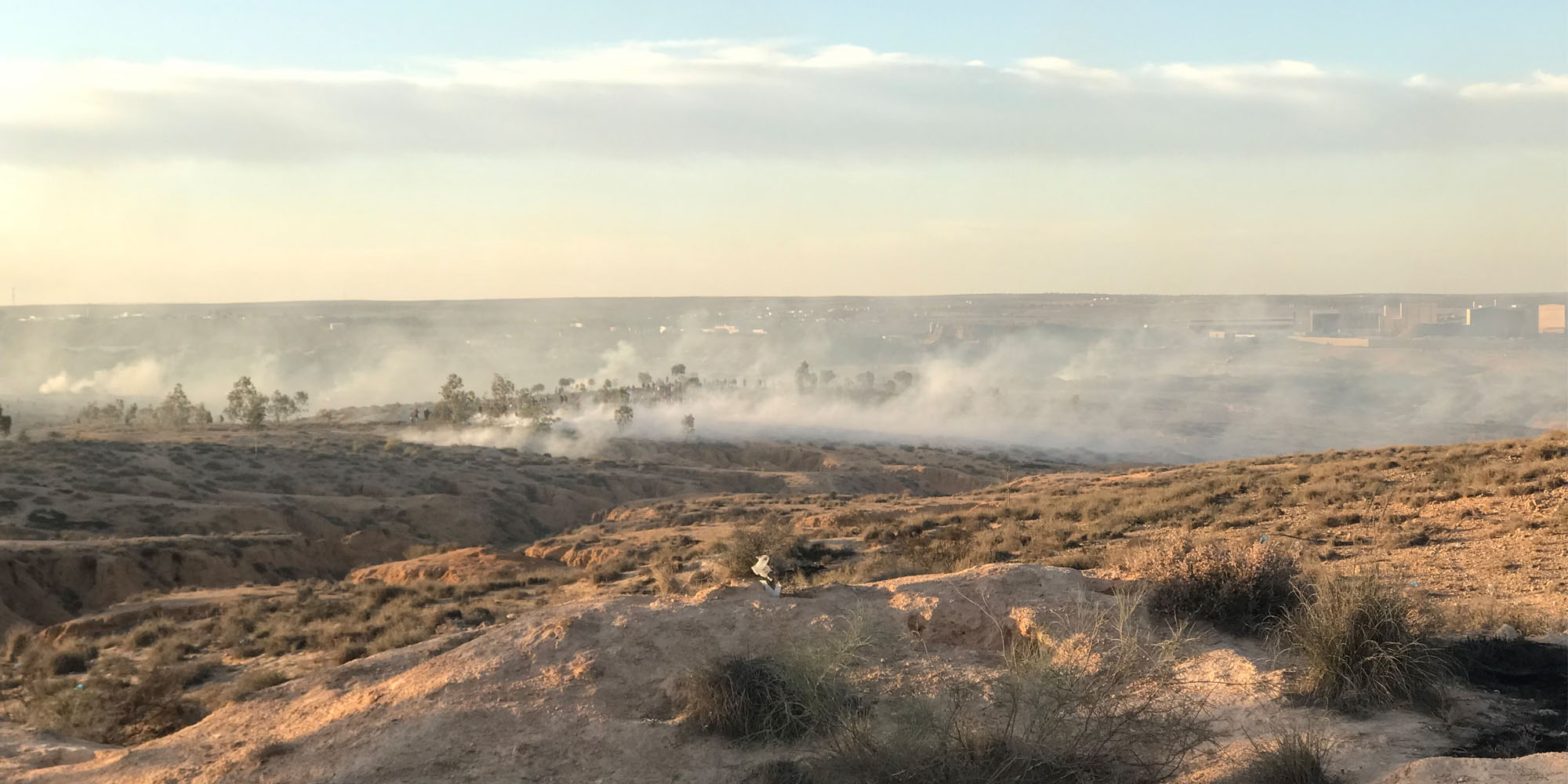 Six kilometers away from the dump site, in the center of the city of Agareb, Meshkal/Nawaat talked to a few of the young men and women who have been taking part in the local protest wave.

“We want a safe environment and to save our city, full stop,” said Mahdi, who declined to give his real name for fear of retaliation by police forces. Locals said many protesters had been arrested and claimed they were facing terrorism related charges.

“We are protesting because we are frustrated… Look at how many we are now, you would barely find three among us that are employed,” Zied, one of the young men who was confronting police earlier that day told Meshkal/Nawaat and who also declined to give his real name.

Zied and many others expressed disappointment in President Kais Saied’s handling of the crisis and accused him of failing them. “In 2019, when he came for his [presidential] campaign, he promised us to find a solution and said that we should fight for our right, even with blood. But now he has betrayed that promise,” Zied added.

The people of Agareb consistently pointed to health risks caused by the trash dump in recent years.

“We are suffering from all kinds of allergies, cancer, infertility… In addition to insects and the smell which forces us to stay indoors and bear with the high summer temperatures… I have an air conditioner but what would other people who don’t do?” 50 year-old Hayet Akacha told Meshkal/Nawaat.

“For 14 years, we have been bearing every kind of waste being brought to us from all over Sfax… The dump has reached its maximum capacity and can no longer take in more waste,” Akacha added. 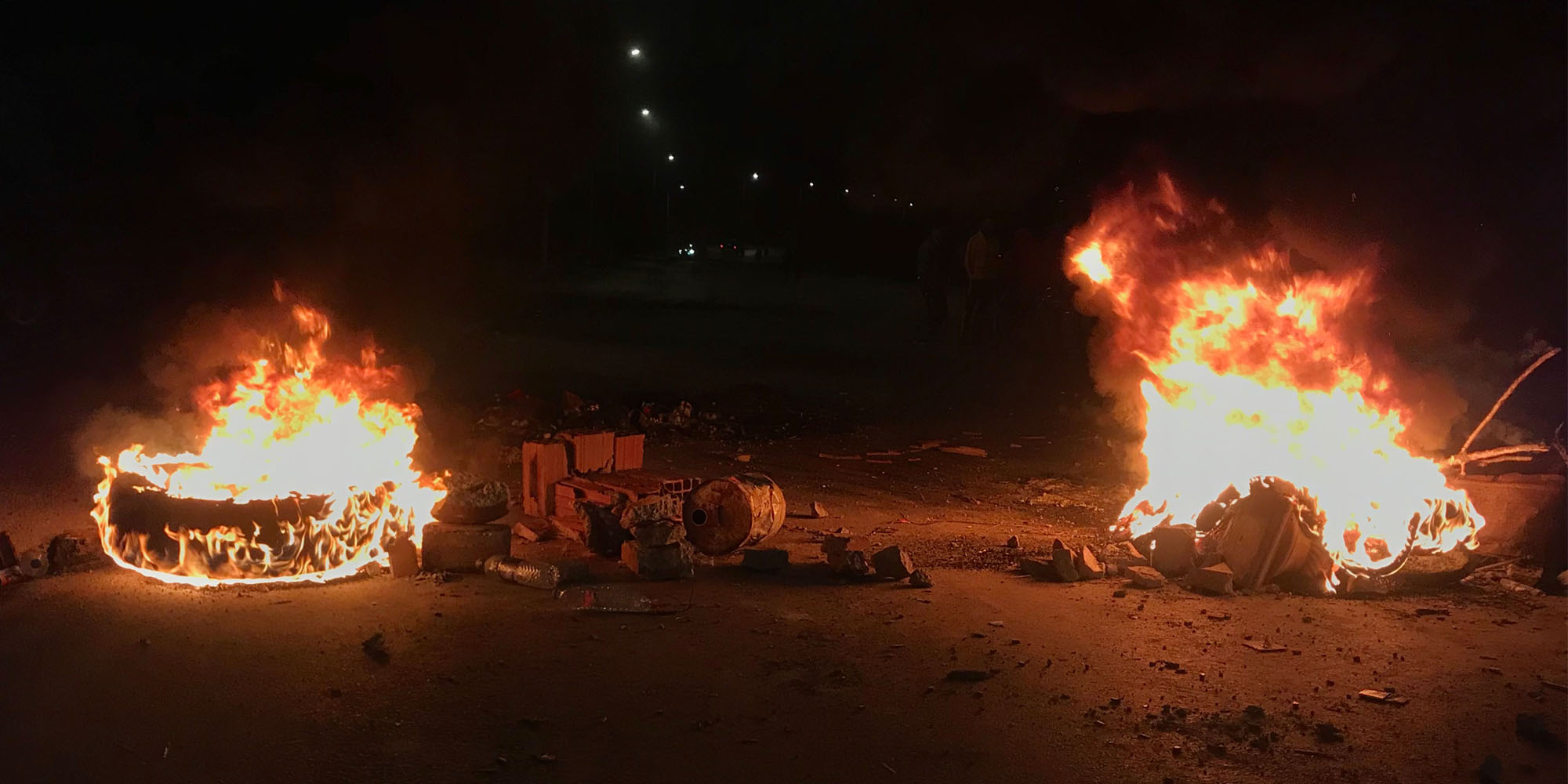 Akacha said that her lungs are functioning at only half capacity after suffering a major health crisis brought on by her proximity to the waste dump. Akacha said she had to spend five days in a private clinic to recover but she still suffers from the repercussions today. “Doesn’t Agareb belong to Sfax and the Tunisian republic?” she asked. “We are not asking for anything, we are asking for the simplest of our rights; a clean environment.”

Meanwhile, Tunisian President Kais Saied met with a group of local activists from Agareb on November 11. In that meeting he stated that “the waste issue in Agareb is an issue that concerns all parts of the country and there is a work in progress for a comprehensive solution to be found as soon as possible.”

As for the cousin of the deceased Lachhab, he has one message for officials : “My message to officials: live like me for one day and then you will close the trash dump. Live like a citizen, like me, before being an official,” said Lachhab.