Damino held her ground in the middle of a crowd as she stood facing tight rows of police officers. Between them, metal barriers had been set up to prevent protesters from reaching the parliament building in Bardo. On this Tuesday, January 26, Damino carried a sign proclaiming « The system is corrupt, the cops are in government ». The protest sign earned her a spot behind the barriers, where she was dragged the mass of police. Out of sight from the other protesters, police threatened to accuse her of assaulting an officer if she returned to the demonstration.

« They interrogated me in their usual language. One of them threatened that they would do what they wanted to me away from my comrades », Damino told Nawaat, « Some of them tried to take off my mask and hat to determine my identity. One officer taunted me, ‘Are you a man or a woman?’ Another shouted: ‘I want to take your photo and turn it into a meme on social media’ ».

That day, Damino spoke out along with other protesters against corruption. More than 1,600 people were arrested for having participated in the protests or for having encouraged hate movements on social media, according to the Tunisian League for the Defense of Human Rights (LTDH by its French acronym).

Rejected by the State

Damino is active within the Tunisian Intersex Collective. She prefers the name « Damino » to her initials « E.A », which reminds her of the gender she was assigned at birth, before her identity was legally changed. Intersex individuals are born with sex characteristics (genital, gonadal or chromosomal) that do not correspond with classic definitions of masculinity or femininity. This difference can appear before or after birth or at puberty. According to Amnesty International, 1.7% of all children are born each year with these differences. In Tunisia, the Tunisian Intersex Collective defends their rights, including the right to choose one’s gender identity.

« Intersex Tunisians have been rejected by the State, just like some of them have rejected their own bodies after having undergone operations, against their will, so that they will be accepted by society », Damino said. « Queer and intersex individuals will defend Tunisians’ social and economic demands, even if the State does not consider them human because of their differences ».

In terms of legal recognition, these issues fall to the discrection of judges. In 1990, the court ruled in favor of Amir, who, upon reaching the age of puberty, proved to be a woman. In 1993, the court rejected a change of sex in the « Sami Samia » case. The judge’s verdict was based on the eighth verse of the Quranic Sura Al-Raad and a prophetic hadith.

As a result, Damino considers that Queer and intersex individuals are leading a struggle against the judicial system, the Ministry of Health and the established order as a whole. The Tunisian Intersex Collective called upon its members and supporters to participate in recent protests on its Facebook page.

« We are gradually trying to show our existence through the Tunisian Intersex Collective and associations like the Mawjoudin Initiative for Equality. We have to make ourselves known and show what it means to be intersex in a scientific but also accessible way », she said.

Gradual Inclusion Within the Protest Movement

The day of Tuesday, January 26 was a difficult one for Damino. But the impact of her encounter with police during the protests in Bardo was alleviated by her sense of security within the crowd of young protestors. Surrounded by demonstrators sharing the same demands, Damino was not worried about taunts or harassment. What’s more, she wasn’t the only Queer activist to stand on the front line of protests. 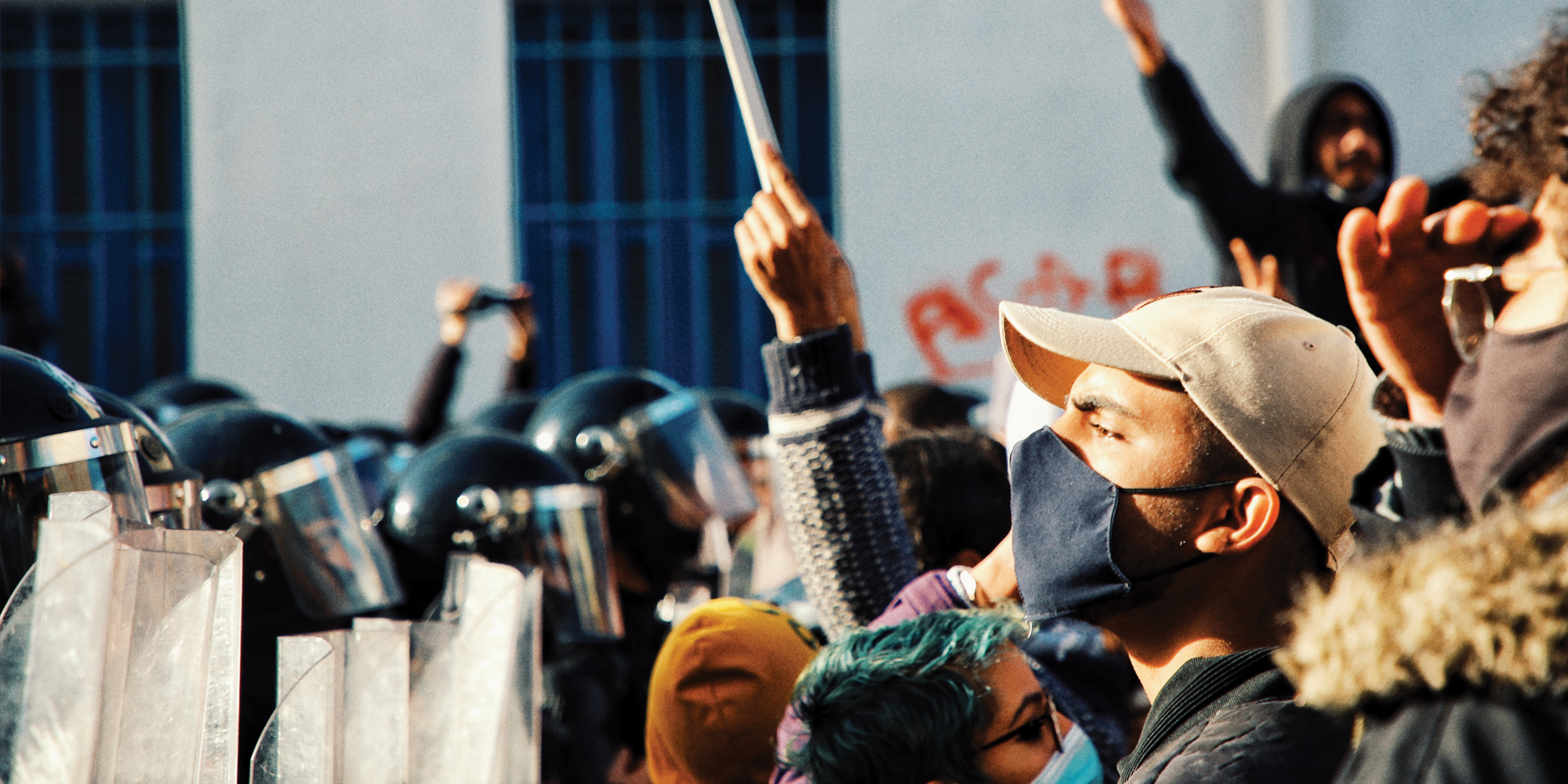 The image of Firas kissing his girlfriend in front of police barricades on Bourguiba Avenue on January 23 elicited a flood of comments on social media. Some approved ; others saw it as an imitation of Lebanese and French protestors. Meanwhile the most conservative people denounced it as immoral. But since the photo was shared, Firas said that he feels worried about walking alone in the street for fear of being arrested.

« As soon as a police officer discovers your difference, you can be arrested in the street. He can accuse you of upsetting the public order », said Firas. In spite of his anxiety, however, he says that he is proud of the Queer community’s remarkable participation in protests.

« Our presence in recent movements is the result of a process that began in 2011. We have confronted a major problem: that the street is monopolized by cisgender people. During that period and up until last year, for Queers simply appearing in the public space was a big problem and could even constitute a danger. This was true during protests and even during normal times », Firas told Nawaat.

Since protests last October against adoption of a bill relating to ensuring extra legal immunity for security forces, Queer activists have increasingly been detained. The arrests of Hamza Nasri and Saif Ayadi, members of the Tunisian Association for Justice and Equality Damj, provoked an outpouring of sympathy, enough to even undermine the slander campaigns against Queer activists carried out on the Facebook pages of security force unions and governing parties.

These activists, who have repeatedly put themselves on the front lines of protests, calling for the defense of freedoms and chanting social demands, have given Queers greater visibility in public space.

« Although we stood for the same demands, we had to confront a sort of exclusion at the beginning of the preparation of protests against the social and economic situation. During the Fech Nestannew [What are we waiting for?] and Manich Msamah [I don’t pardon] campaigns, our presence on the front lines wasn’t wanted, » Firas said. « Some of the organizers of these campaigns feared that our presence might constitute a disservice to demands by feeding counterpropaganda. But now, the movement is spontaneous and no political or civil party can claim ownership. This is what enabled Queer activists and members of associations like Damj and Mawjoudin to be so present ».

On January 25, the day before protests in Bardo, 34 organizations signed a declaration calling on Tunisians to observe a day of anger on January 26 and to protest in front of Parliament. Associations who signed included the National Union of Tunisian Journalists (SNJT), the Tunisian League for the Defense of Human Rights (LTDH), the Tunisian Association for Justice and Equality Damj and the Mawjoudin Initiative for Equality.

Firas is proud of the two associations’ strong presence alongside national organizations. He believes that Mawjoudin and Damj were able to establish a presence thanks to their role in protests.

« We became one of the main engines of the movement and not just simple participants. Our role is more important than that of certain political parties accused of trying to take advantage of the movement », he said.

« During the last protests we were better accepted. Without even being members of our associations, some protestors intervened several times in opposition to prejudiced slogans like « Fag ». Police batons didn’t deter them. And I think that the State is very concerned by our unity. Its executive apparatus is therefore trying to divide us by denigrating us and by treating us inhumanely as a result of our differences », he concluded.