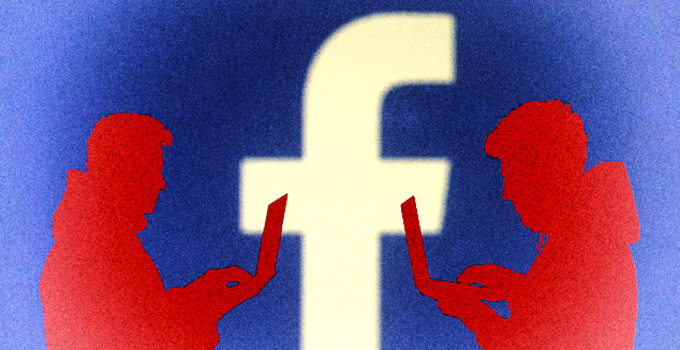 Nathaniel Gleicher, Facebook’s head of cybersecurity policy, published a blog post on May 16 to announce that the company had removed 65 Israeli accounts, 161 pages, 12 groups and four Instagram accounts. Facebook suspects that these elements belong to one network originated in Israel that used fake accounts to run disinformation campaigns and artificially increase engagement on seemingly local pages they created. The pages were of political/partisan nature and reportedly generated around 2.8 million followers targeting at least 13 countries including Nigeria, Senegal, Togo, Angola, Niger, Tunisia and some countries in South America and Southeast Asia.

What do we know about the Tunisia-focused pages?

Among the examples of the content posted by some of these pages, Facebook shared one post focused on Tunisia, a page titled ironically “Stop à la désinformation et aux mensonges en Tunisie” (“Stop Disinformation and Lies in Tunisia”), see screenshot below: 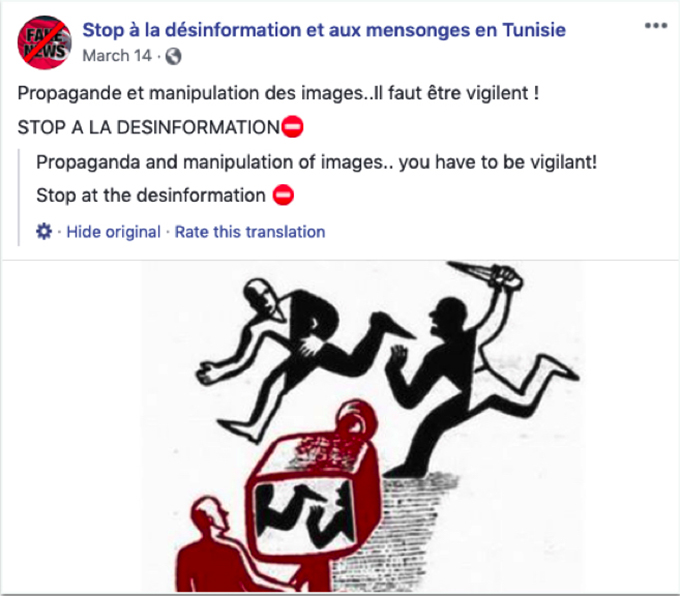 In a more detailed report about the case by the Atlantic Center’s Digital Forensic Research Lab (DFRLab), a research group that collaborates with Facebook, the researchers include a screenshot that shows that this Tunisia-focused page created in March 2019, rapidly garnered over 11,000 followers (which could be a sign of an artificial increase of engagement), see screenshot below: 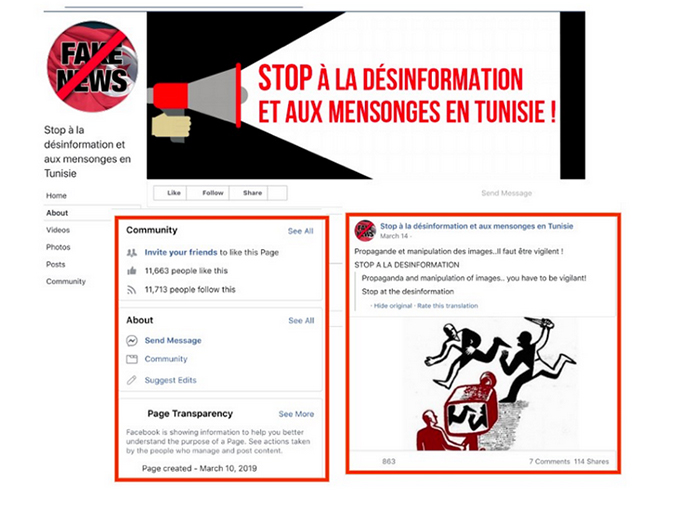 In the same report, one the highlighted patterns that enabled the Facebook investigation team to identify the coordinated unanthetic behaviors is how many of the pages pretend to be run by people from a location were in fact discovered to be run from elsewhere (using the Facebook transparency tool). Many pages focused on African countries were managed from Israel. It could be interesting to note that a page focused on Algeria called “Algérie-Flash” was revealed to be managed from Tunisia, see screenshot below: 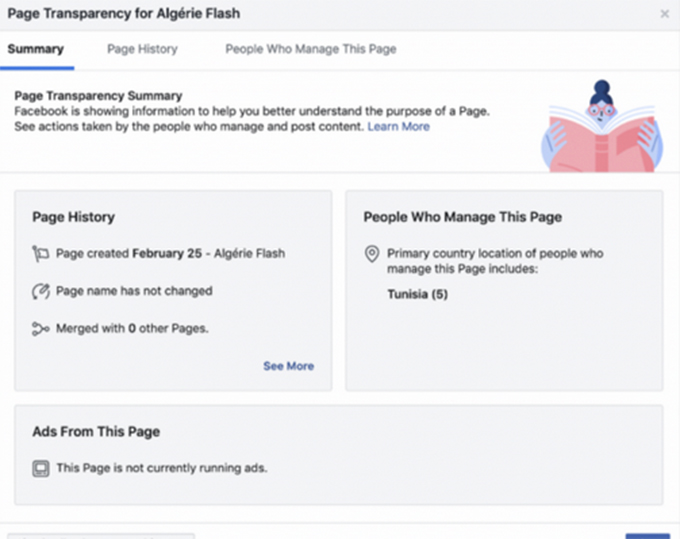 Other patterns include the fact that the content creators confused countries in their published content, demonstrating they had no real knowledge about the countries they were pretending to be from. DFRLab mentioned that a Tunisia-focused page called “Tunisie Mon amour” featured images of Morocco and Turkey as if they were from Tunisia.

What do we know so far about the Israeli network?

In the Facebook blog post, Nathaniel Gleicher revealed that the investigation found that the activity was linked to an Israeli company called Archimedes Group but didn’t explain how they confirmed such finding. It is estimated that the network spent around $800,000 for ads on Facebook paid for in Brazilian reals, Israeli shekel, and US dollars from 2012 to 2019.

On May 19, the Times of Israel (TOI) published an investigation article where they linked Archimedes Group to number of other companies and groups of interest like Grey Content, GetSat and Alumot. Initially they shared information based on Archimedes Group’s website (https://www.ar-gr.com/– which are no longer available as of today because the company removed most contents of their website and edited out content from the “About” page). Archimedes Group used to self-identify as a Tel Aviv-based political consulting and lobbying firm that sells its ability “to change reality according to their client’s wishes” through a software product called “Archimedes Tarva” used for mass social media campaigning. The page with the product description (https://www.ar-gr.com/products) has also been deleted as soon as Facebook went public.

There are no more available information about the software online and no detailed description of its technical capabilities. Screenshots of the information deleted from the website was tweeted by Associated Press’ journalist, Raphael Satter, see tweets below: 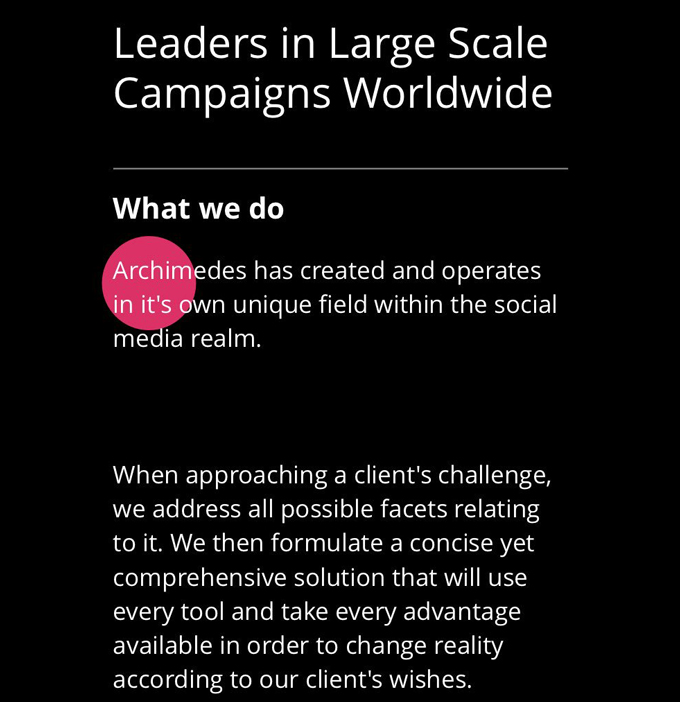 According to TOI’s findings, Elinadav Heymann is the CEO of Archimedes Group, He was previously director of the European Friends of Israel in Brussels, a spokesman and adviser in the Knesset, and before that a “Senior Intelligence Agent” for the Israeli air force as mentioned on his profile on Negotiations.ch. Heymann’s profile on the website is no longer online.

All of these deleted information by Archimedes Group proves the people behind the firm are aware of the illegal nature of their activities and as they are now put under the loop, they’ve acted fast to cover their tracks. Even if it was among the few named countries in this particular case, the published information about Tunisia are quite scarce. We don’t know how many pages targeted Tunisia, the nature of the content, where they were ran from and the percentage of organic engagement versus artificial engagement. Thus, it is difficult to make any assessments regarding how successful the campaigns were as well as the motives behind them.

The DFRLab analysts say they could not identify any ideological theme across the pages removed, indicating that the activities were profit-driven. Archimedes Group is without doubt not a lone case but yet another marker of an established business model; that of making money through the dissemination of fake news.