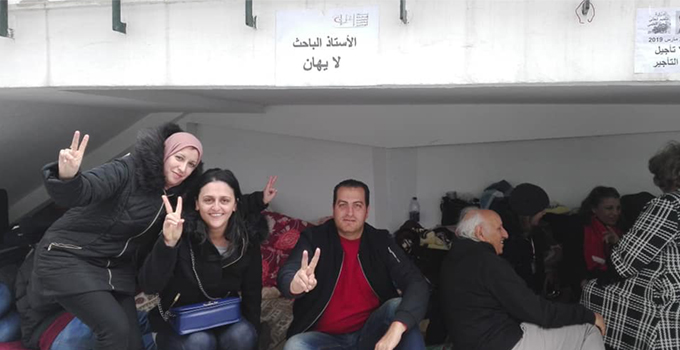 Mounting tensions have been brewing since January 2018. Late last month, on March 25, the Union of University Professors and Researchers (IJABA) decided to stage a sit-in in front of the Ministry of Higher Education. Since renouncing an agreement that the two sides had reached on June 7, 2018, the ministry has attempted to navigate the conflict by marginalizing the teachers’ union. The deep-seated crisis in the sector of public higher education has been made clear through professors’ demands but also through statistics that quantify the disastrous reality that public universities are facing. To this day, 120 thousand students have been prevented from taking their exams for the past academic year, and IJABA is warning the government and the public about the prospect of losing out on the 2019-2020 academic year.

From administrative strike to open sit-in

The 2017/2018 academic year marked the beginning of IJABA’s protest movements. Among the most important of these professors’ demands: the elimination of job discrimination; a pay scale that corresponds to teaching credentials in the public sector; a clear time schedule and road map for drafting a new law with financial outcomes for university researchers through a 0.75% increase in the ministry’s budget over a three-year period. These demands were expressed in a series of movements and strikes throughout 2018 that involved approximately 105 universities and over 4,000 university professors according to IJABA. On June 7, 2018, negotiations with the Ministry resulted in an agreement signed in the presence of the prime minister, the president of parliament and the minister of finances. What initially seemed a breakthrough in negotiations quickly devolved into a second crisis with the ministry’s decision to renounce the agreement. Tensions escalated in November when IJABA announced a periodic six-day strike. Fueled by the Ministry’s continued negligence of the situation, the union decided to hold an administrative strike, refusing to give exam subjects for the first semester of the academic year. The situation continues into the second semester. On February 7, the ministry responded by freezing wages for the month of March in the cases of teachers participating in the strike. This was a decisive push for IJABA, who announced a sit-in beginning on March 25 before the Ministry of Higher Education. 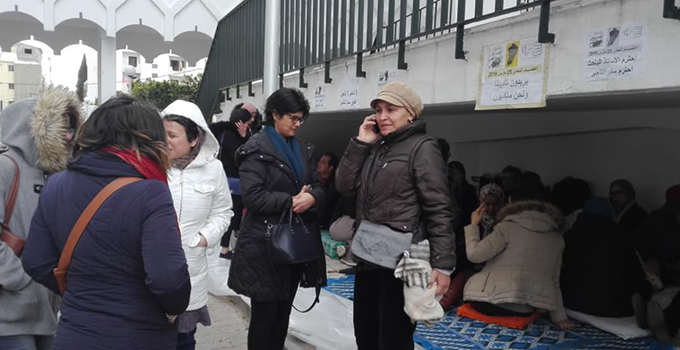 On March 28, day four of the sit-in, the Ministry of Higher Education issued two successive statements. The first accused university teachers of « stirring up chaos, affecting the normal functioning of administrative work and working against the interests of citizens dependent on central administration ». Moreover, it blamed IJABA for blocking prospects for dialogue. In its second statement, the ministry affirmed that it would « enforce the law and stop paying workers’ wages on the basis of their work not being completed ». The Ministry thus justified maintaining the wage freeze, calling university professors to return to negotiations without preconditions and making sure to underline that students are depending on them.

Nawaat finds IJABA’s national coordinator Nejmeddine Jouida in the courtyard where the sit-in is still taking place. « They closed doors on us, turning us out. We spent our first night out in the open, in harsh conditions ». We ask Joudia about the possibility of resuming negotiations, and he tells us that chances are slim in light of the maintained freeze on professors’ wages; the union sees the decision as illegal, designed to intimidate protesters and discourage them from continuing protest movements. He adds, « We have brought an urgent case before the Administrative Court in order to put an end to the wage freeze, plus a second case regarding the abuse of power by both the Minister of Higher Education Slim Khalbous and Prime Minister Youssef Chahed. If justice is not served, then we face the possibility of a lost academic year ». As for sit-inners’ demands, Jouida explains: « Our demands are divided into two categories: the first concerns implementation of the June 7 agreement. The second: the current situation for higher education and public universities ». He further notes, « Our mobilizations are not only about addressing the material and professional situation of university professors, but also about defending the future of Tunisian public universities and targeting the Ministry’s policies and those of the government as a whole ». 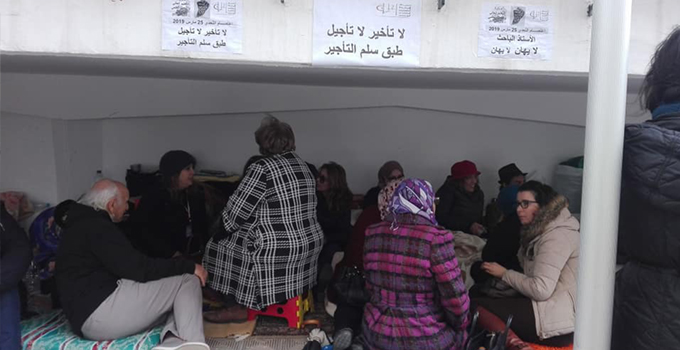 Marginalization of public university to the private sector’s benefit

Through their statements and declarations regarding reforms, IJABA professors have raised a red flag concerning the marginalization of public higher education for the benefit of the private sector, both domestic and foreign. Figures from the Ministry of Higher Education’s statistical office provide a strong basis for this warning. In 2018, the ministry’s share of the national budget was 4.1%, a total of 1,481 million dinars; only 9.1% of this was allocated for spending on development. In the previous year, this represents an increase of only 3.4%. In terms of government spending as a percentage of GDP, the same ministry received a meager 1.48% slice of the pie. The decline in government spending on public higher education institutions is reflected more clearly in resources allocated to scientific research, a total 4.02% of the ministry’s budget, and in the freeze on teacher recruitments since 2015. As a result, the Ministry of Higher Education currently has the largest number of unemployed doctoral graduates, around 5,000 according to IJABA.

These indicators clearly show the degree of marginalization that the sector is suffering. And while ministry data reveals a decline in the number of students enrolled in public universities—from 315 thousand to 241 thousand for 2013-2018, private universities witnessed a boom in the number of institutions: from 42 to 75 private higher learning institutions over the past five years, or 26.2% of all universities. That trend coincided over the same period with an increase in the number of private sector students, from 21,880 to 31,177, or 11.5% of all students. The spike in the number of private learning institutions also coincided with the sector’s growing cases of corruption. The Court of Auditors report number 31 of 2018 identified a number of violations relating to the absence of necessary licenses, the granting of unauthorized university degrees and institutions exceeding their enrollment capacity. Furthermore, approximately 20% of private universities displayed a 65% increase in registration rates, a violation of the 5% cap.