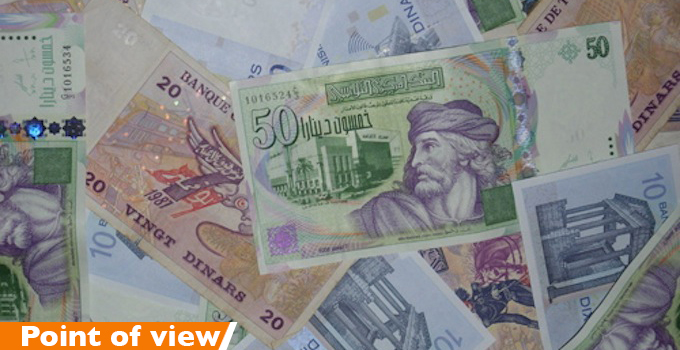 Indeed, during its mission to Tunisia in December 2017, IMF recommended the adoption of a tighter monetary policy, “including by containing bank refinancing.” If the Tunisian Central Bank were to tighten its monetary policy, this could very rapidly lead to a shortage of liquidity with negative effects on individual consumption, as well as on investment. The measure recommended by the IMF aims to contain inflation, which exceeded 6% in 2017, while growth remained low (1.9%) and unemployment high (15.5%). The authorities have avoided calling it by its name, but Tunisia suffers from stagflation – a combination of high inflation and unemployment. If the Central Bank does not adopt very ambitious and large-scale measures to limit the amount of liquidity outside the banking sector, and continues to limit the refinancing of banks, it could create a dire liquidity crisis in the country. In turn, this would exacerbate the ongoing stagflation, and lead to a major systemic failure of the financial sector that would bring down the economy. Figures are already ominous. Inflation in 2018 has reached 7.8% while official figures report only a tiny decrease in unemployment to 15.4%. In other words, money massively injected into the economy has hardly produced any positive effects – except maybe for a growth rate in Q1 of 2018 that stands at 2.5%, as opposed to 1.9% during the same period in 2017.

The position of the Central Bank on a possible liquidity crisis is unclear. It has recalled some bank notes, mainly the fifty-dinar note, thought to be the principal medium of exchange and store of value used in the informal sector. However, this can only have a marginal effect, due to the sheer size of the issue at hand. In addition, this cannot resolve the problem of inflation, as high inflation in Tunisia is not rooted in monetary phenomena. It is rather due to a failure of production in the real economy, the root causes of which the government has been unable to address (bureaucracy, corruption, difficulties accessing funding, etc.) which explains the IMF’s impatience.

To make things worse, the financial sector, mainly private and public banks, is not a very reliable partner for two principal reasons. The first is the sector’s documented poor performance in resource allocation and risk management: banks continue to feed the real estate bubble, to fund the same traditional partners, and remain infamous for their lack of transparency.  The second and most important reason is that banks are already too hooked on Central Bank funding, due to their fragile condition. They will continue to borrow despite high interest rates, while dear money dissuades good investors. A Cornelian dilemma in its own right…

The position of IMF with respect to a possible liquidity crisis is also difficult to predict. On one hand, it has been very demanding regarding the delivery of reforms and has been speaking in a harsher tone to its Tunisian counterparts. It may prove inflexible with respect to limiting refinancing of the financial sector, especially since this measure is aimed at containing inflation, Tunisia’s second main enemy behind corruption, in the current phase of its economic reform. On the other hand, IMF has also shown that it can be flexible. The recent global evolution of the institution itself has made it less rigid and more sensitive to local specificities. The role of IMF will prove instrumental in avoiding a major liquidity crisis that would result in a shortage of money itself and cause major social unrest. Meanwhile if the Central Bank’s interest rate – currently at an all-time high of 6.75% – continues to rise, the consequences will be terrible for Tunisian consumers and investors.