The unlikely encounter allowed participants to put their heads together to design cartooning workshops for students of citizenship clubs in 11 different governorates, as well as for detainees of the Mornaguia and Mornag prisons and the Mghira reeducation center for juvenile delinquents. According to the project’s artists and organizers, the clubs and prison establishments represented in the September training were only the beginning. The idea is that participants of the first exchange will train others in the coming months. Tapping into its network of contacts in the 23 citizenship clubs spread throughout the country, the IADH summoned educators of different regions to the meeting in Tunis, as explained Programs Director Maya Ben Khaled. Walking us through the illustrations that will accompany the workshops to come, she says that encouraging students to discuss complex or controversial issues through cartoons encourages them to discuss « topics that are more or less taboo, which aren’t necessarily addressed in school programs, like the death penalty or sexual and reproductive rights ».

For its part, the OMCT provided the link to prison establishments. Referring to the organization’s work with Tunisia’s Department of Prisons and Rehabilitation (DGPR), OMCT Project Coordinator Emtyez Bellali indicated that prison directors’ willingness to sign onto the cartooning project is in line with efforts over the past few years to provide cultural and artistic outlets for detainees. Recent events like the participation of Borj Erroumi prisoners in the International Festival of Bizerte in August, is proof. « It’s strange because we’re in Tunisia, but we work well with the DGPR… It’s been years. » As for the project underway, it is an « important collaboration », says Bellali, based on « a great deal of trust. » 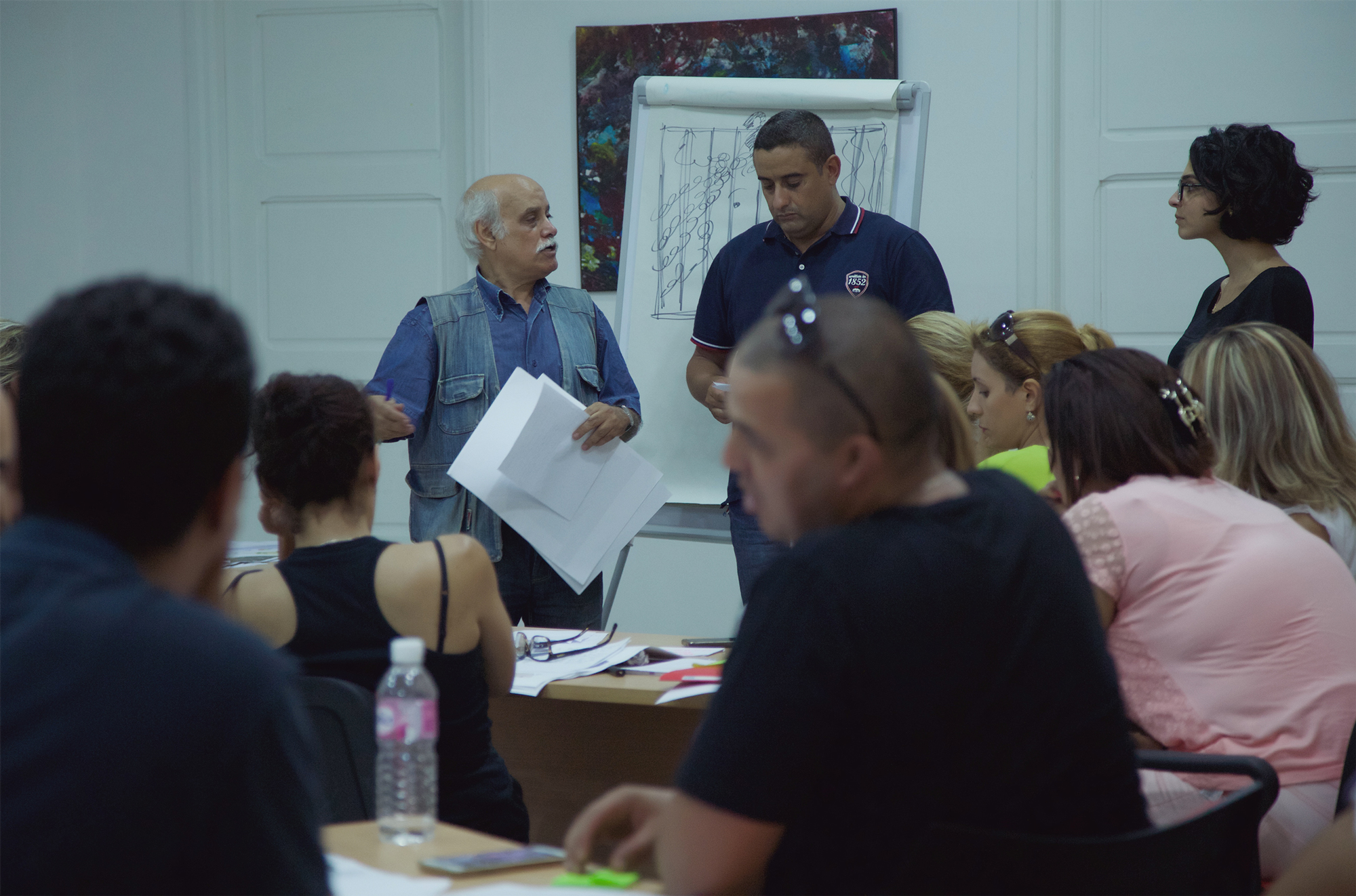 Chedly Belkhamsa sharing ideas with participants during the workshop

Two days are not enough. This seemed to be the general consensus by the end of the training. By the evening of day two, 13 club coordinators, 12 prison staff and six cartoonists appeared weary and brimming with ideas and impressions left by new and unlikely acquaintances. Participants had been divided into groups of four or five where they laid the ground for cartooning workshops with students and prisoners. A few lingered afterwards at the tables outside, chatting over a last coffee or posing for photographs in front of the illustrations on display. Between goodbyes and handshakes, some of the cartoonists took a moment to share their experience so far, beginning with the drawings they submitted for the workshops and travelling exposition.

For Chedly Belkhamsa, who has been doing press illustrations since the 1960s, these two days were an opportunity to understand some of the particularities and sensitivities of two very different groups. In the case of prisoners, for instance, artists were cued on how to connect with prisoners without evoking topics or asking questions that might be upsetting or too personal. And in another context, how to engage with youth: « how to show them, to speak about our work, the complications and the dangers ». Young people, Belkhamsa mused, might not realize the implications of drawing for the press in Tunisia. « They don’t know the dangers of working in Tunisia, especially if we address politics. There are people who have had problems, who have gone to prison, who spent a long time hiding like Z, or who have remained without work like Tawfiq ». Belkhamsa points out certain exercises and questions to raise awareness in this regard. « What is a press cartoonist in a country where there is newspapers hardly reach certain regions? » Or else, « We can hide certain elements of an image and ask, what does this make you think of? What else can you add? What can you remove? » He anticipates that moving around the country to different clubs and prison establishments will be equally eye-opening for artists. « Those of us who draw are often private individuals. We work at home and generally don’t have many relations aside from friends and family ».

Z, who has created political cartoons about Tunisia from overseas since august 2007 and has also worked with Cartooning for Peace on previous projects, agreed with Belkhamsa’s reflections about the training in Tunis. « Things that might have amounted to just bla bla bla will I think lead to concrete projects through which artists will also step out of their bubbles and work on the ground, especially in difficult contexts, that’s what’s really interesting. Whereas it’s no stretch to place a cartoonist in schools, it’s uncommon in a prison setting—there we really reach a different public, there we are in touch with reality ». 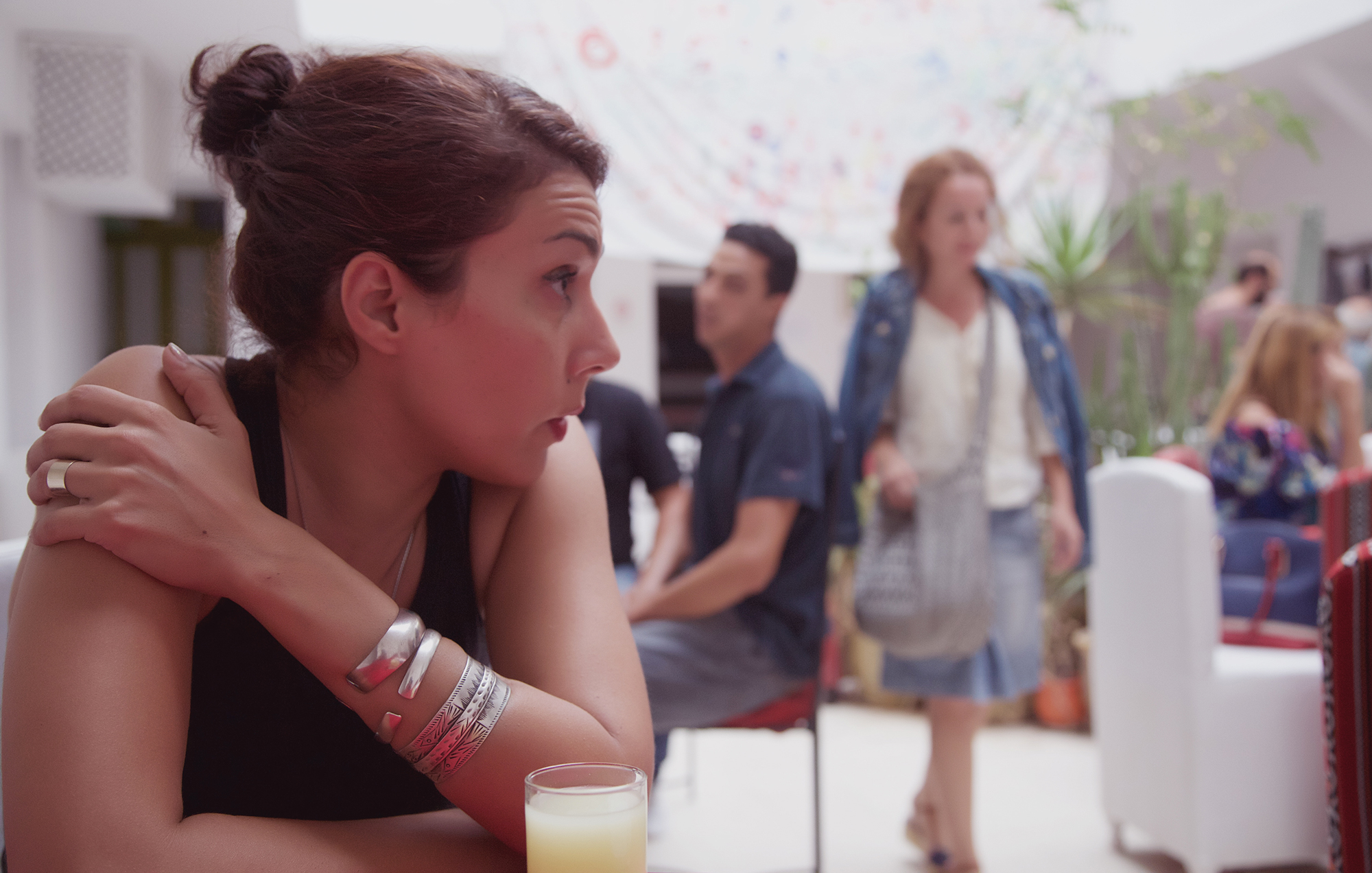 Creator of the comic Willis from Tunis, Nadia Khiari has collaborated with both Cartooning for Peace and the OMCT on different initiatives abroad. Preparations for the cartooning project in Tunisia, she told us, began well over a year ago as organizers coordinated with school and prison establishments. A teacher for the past 20 years, Khiari is passionate about exchanging with young people, and is eager to start working with prisoners. She was impressed by the energy and enthusiasm of prison staff she met, and more generally about the DGPR’s unusual openness to bringing art and cultural activities into prisons.

Khiari clarified that the objective of the coming workshops is not to teach people how to draw, but rather to enable them to confront difficult subjects « with lightness ». Describing press illustrations as « a vector for freedom of expression, for sharing different opinions, for reflecting on sensitive topics, especially taboos, » she underscored why it is relevant to explore them with the populations in question. The point, in her words, is to « question the established order, take a step back and look at a problem from different angles. The goal is to share our work and to say that everyone can do satire just by speaking of his personal experience and his opinion. You don’t have to be a political specialist to do this », she concludes with a smile.