Anis Mahrsi was practically a permanent installation at a recent film festival in downtown Tunis. Prior to evening film screenings, he was easy to pick out of the crowd: in a café teeming with movie-goers, Mahrsi, in a grey tilby hat and stripes, sat before the easle resting on his lap, colored markers at his side, black marker held to the paper in front of him. The chair opposite him was invariably occupied by some stranger showing a self-conscious smile as Mahrsi sketched out the person’s likeness, his or her features exaggerated on a disproportionately large head. At the end of each evening, most everyone left the theatre with a caricature in hand, a rolled up portrait or couple of the postcards that Mahrsi had made for the occasion, one illustration for each of the festival’s eight films. 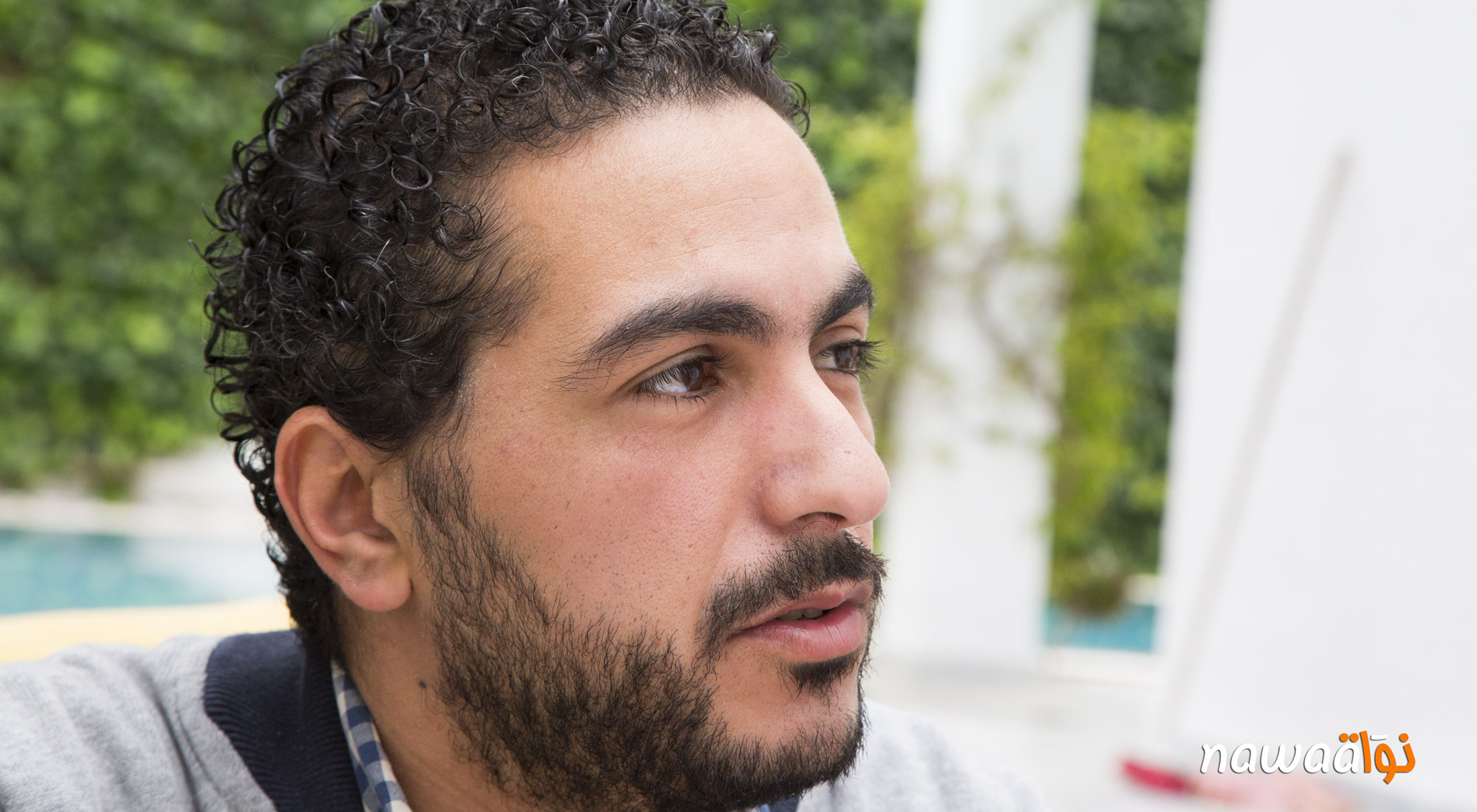 « I’m sick, » Mahrsi smiles. « My hand is sick… Like someone who always needs to smoke, I always need to draw. » Indeed, one of the most impressive things about Mahrsi is his seemingly relentless productivity, the profusion of caricatures, illustrations and projects he has worked on since 2011. In spite of a limited market, a media landscape that thas yet to shake of the habits of censorship, and lack of recognition, Mahrsi has not let down his pen for a moment.

Censored after the revolution

After completing a degree in architecture and another in graphic design—domains in which he is convinced he could make a good living—Mahrsi was set on building a career out of anything related to drawing—caricature, illustration, comics. Although he stands firmly by his decision, accumulated frustrations and blocks along the way still weigh heavy in his mind. For three years, Mahrsi worked for one of the first radio stations to become licensed after 2011, where he made caricatures of program guests, had a segment in which he described his drawing to listeners, and published his work on the station’s website and Facebook page. Eager to broaden his scope of inspiration, he began to focus on public figures outside the recording studio and to pull ideas from the news. « Until the day when I was censored, frozen » and ultimately pressured to quit. « At first, they would tell me that I focused too much on politics: ‘Focus more on social topics—the trash in the streets, the environment, the revolution…just don’t talk about politicians … Our job is to make people laugh,’ » he was told.

But Mahrsi was insistent. « Their are certain things that demand a response, » he explains, citing as example a political candidate who announces a new social project on which he never follows through.

Mahrsi is certain that the political figures and media personalities he portrays were the reason behind broken contracts, assignments for which he was never paid, and jobs that came to an end without explanation. He indicates that former colleagues and employers, fearing his caricatures would undermine relations and prevent the subjects of his drawings from giving interviews or appearing on shows, had refused to work with him or denied him compensation for work he’d done.

« It’s a shame how the media push out journalists who draw caricatures—you can’t just push people out, it’s freedom of expression. » But since 2011, Mahrsi feels that gains in freedom of expression have faded out as the « former system » has faded back in, and that censorship remains and has only taken on different forms. He evokes a sort of « soft censorship » in which artists are discouraged, by way of « advice, » to drop or avoid certain topics that are presumably uninteresting or not worth discussing, but that ultimately they are pressured until, stifled and exasperated, they quit.

Every news journal needs a caricaturist, Mahrsi persists. Like it or not, he explains, a caricaturist’s work falls under the umbrella of journalism. A drawing is a universal language; sometimes a simple illustration and three words capture an idea or convey a message more effectively than an elaborate news article. And while a number of news outlets do not appear interested in hiring a full-time caricaturist (« they may offer you a job, but for nothing, or for catastrophic pay »), they don’t seem to mind using their work. Mahrsi knows others who, unable to make a living through their art, spend their days working to make ends meet and their spare moments drawing, only to find that illustrations they’ve posted online have been picked up and diffused (without permission) by one or another media outlet. 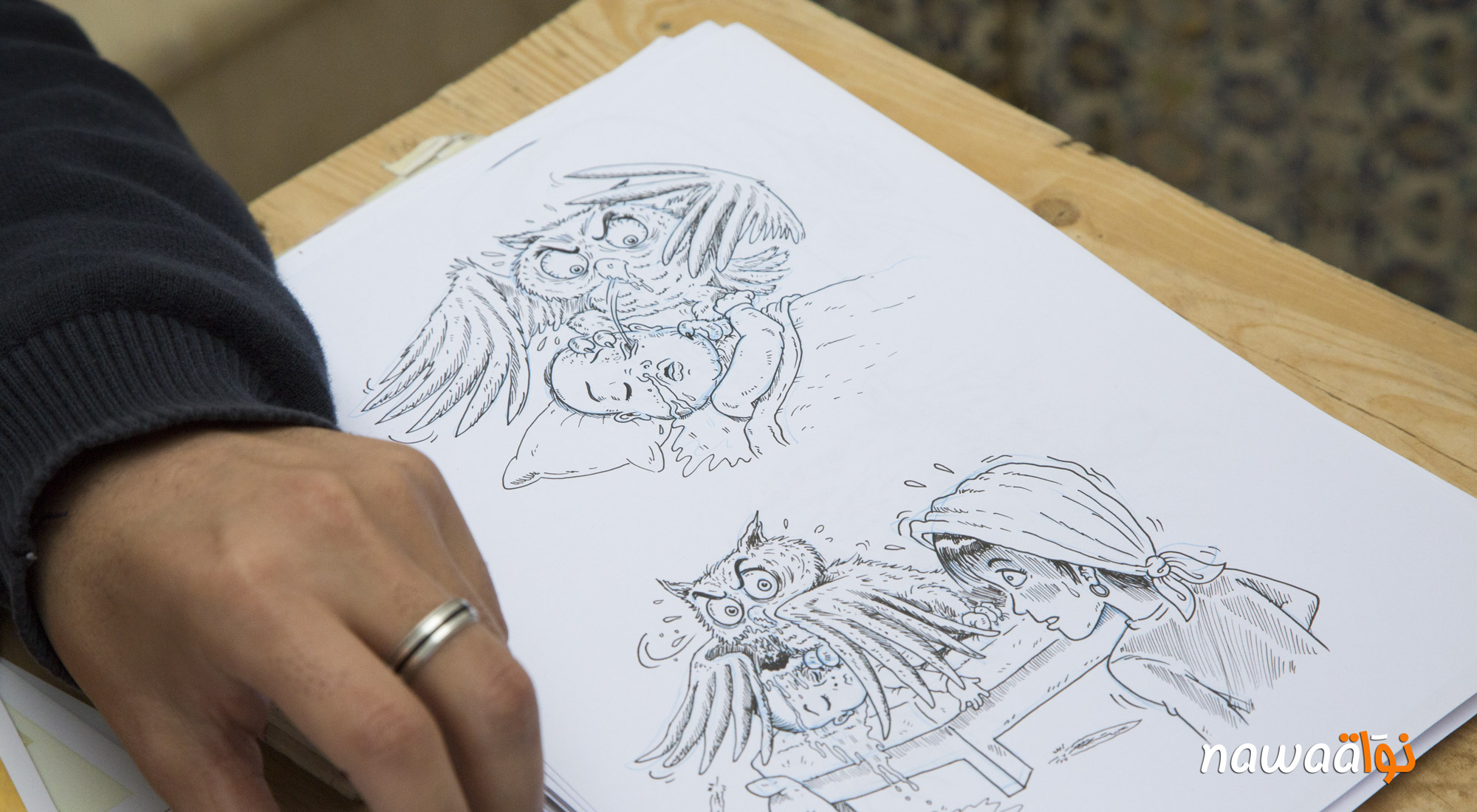 Mahrsi describes feeling as if he is trying to climb a broken ladder. In spite of this and disillusionment regarding « how the media exploits artists » but has made no place for them, he is clearly eager to find his niche in a journalistic setting, in collaboration with broadcast, digital, or print news outlets. In the meantime, he moves from project to project, transferring all the ups and downs of his journey onto paper. His hands are never idle, whether he is illustrating book covers and children’s stories, sketching out caricatures and comics. This week, at the International Book Fair in Tunis, he presents what he says will be the first of many comicbooks, Carica-tous risques, a title that plays on what so well defines Mahrsi’s drive to pursue « caricature at all costs. »