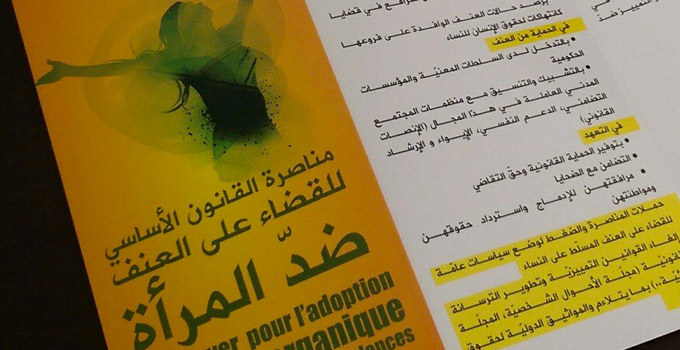 In anticipation of International Women’s Day on March 8, Tunisian civil society organizations are campaigning for the expedient adoption of legislation concerning the elimination of violence against women. During the two-day seminar in Tunis on March 4 and 5, law professor and activist Hafidha Chekir reminded those present that « March 8 is not a day of celebration, but of struggle. » For members of the Tunisian Association of Women Democrats (ATFD), the Tunisian League for the Defense of Human Rights (LTDH), and other non-governmental associations engaged in the campaign, this is the fourth year of efforts toward the creation of a comprehensive law to address discrimination and violence and promote gender equality. Although a draft law was submitted to parliament in July 2016, the ARP’s Rights and Liberties Commission has yet to examine the text.

In 2013, four experts including former ATFD president Sana Ben Achour set to work writing a draft law, though without the support of the technocratic government headed by Mehdi Jomaa who preferred to avoid stirring ideological tensions between political parties. The task was taken up again in 2015 by Samira Merai, then Minister for Women, Family and Children under Prime Minister Habib Essid. Former parliamentary deputy on the Afek Tounes block, Merai owed her ministerial position to a favorable vote by the Ennahdha party. When Merai assigned a new team of experts to draft a law from scratch, she was hoping to produce a text that would not offend her Ennahdha allies. « The watchword during this phase was to move away from the Personal Status Code and to avoid sensitive questions such as marital rape and inheritance [inequality] ». Civil society actors who hoped to reform the Personal Status and Penal Codes through a new gender equality law were therefore excluded from subsequent meetings with drafters, political parties, and international funders. On 12 May 2016, a completed text was finally presented to the Council of Ministries, where it stalled owing to complaints from the Ministries of Justice, Education and Religious Affairs that they had not been consulted during the drafting process. The draft was nonetheless approved and passed along to parliament on 16 July 2016.

In August 2016, Samira Merai was replaced by Neziha Labidi to head the Ministry for Women. In the meantime, the ATFD, LTDH, Beity Shelter for Homeless Women, and other associations who are the first recourse for women victims of violence are pushing for the adoption of the pending draft law, even while one of their primary critiques regarding the text is its failure to recognize the essential role played by non-governmental actors.

Professor and long-time activist Hafidha Chekir highlighted this among other shortcomings in the proposed legislation on March 4. Following an overview of the draft law’s four chapters—concerning the prevention of violence, protection of victims, penal proceedings, and legal action and institutional services for victims of violence—Chekir presented a critical reading of the text prepared by the ATFD. « This law is an achievement, the culmination of all struggles since the nineties, » she began. She pointed out advancements from international standards, such as a broader conception of discrimination (with reference to discrimination on the basis of age, health and handicap). But mostly she discussed the text’s flaws, beginning with the lack of a comprehensive strategy that prioritizes the prevention of violence. According to Chekir, such a strategy must focus on changing mentalities and prevalent patriarchal morals which, she explained, are fundamentally discriminatory. To this end she proposed that all ministries and state institutions take part in the diffusion of a culture of equal rights.

Secondly, Chekir pointed out the absence of references to international conventions, particularly the Convention on the Elimination of All Forms of Discrimination against Women (CEDAW), and to national texts, such the new constitions of which articles 21 and 46 concerning equal rights and the State’s role in the elimination of violence against women. Finally, she noted that « there is no importance afforded to civil society organisms, and yet it is civil society who is at the origin of the struggle and initiatives against violence. It is civil society who began taking care of victims of violence. »

Chekir, pronouncing herself among the oldest of those present, illustrated her point with an anecdote. Years ago, a group of activists were summoned to the Interior Ministry having created a poster denouncing violence and compelling the Ministry to take care of victims of violence. The response to demands was clear : « Why are you talking about violence? You should be talking about quiescence… »

Several individuals pointed out during Saturday’s seminar the telling absence of representatives from the ministries concerned. The one exception was Najet Jaouadi, department head for the protection of minors within the Interior Ministry. Standing up to take the microphone after panel speakers had presented, Jaouadi admitted with commanding presence the difficulty in engaging the Ministry, but confirmed an « openness » to cooperation. She highlighted in particular the Ministry’s responsibility to adhere to specific protocols in the collection of testimonies and documentation of violations.

Beyond legislation, and outside the capital

Ghzala Mhamdi is vice president of the LTDH in Gafsa. When the floor was opened up to questions and comments, she wondered about the practical impact of these discussions and measures on women in areas far from the capital. How, she asked, do the rights, laws, and mechanisms proposed materialize for women in Gafsa working in factories, or in agriculture, or for entire families who are begging every day in the streets? A lot of women don’t understand the laws. She questions the relevance of legislation elaborated by ministries and lawyers and associations in Tunis. « The same words we heard last year, we’ve heard today…and what have we done since then? We’re not waiting on words, but actions. What’s more, the laws, this draft law—did women participate? You have to meet these women where they are, get an idea of their realities, of the issues they face, and then make a law … Why not have the conference in Gabes, Tozeur, Gafsa? Why do we from outside regions always have to come here? »