For its stopover in Tunisia, the Ibn Battuta Odyssey of Alternatives, a mobilization across the Mediterranean which culminates at the COP22 in Marrakech, set up camp in Gabes, although the boats had docked in Bizerte. Three days of exchanges and debates concerning an environmentally- and socially-destructive economic model and potential alternatives drew attention to the deplorable environmental situation in Gabes, and were marked by heightened tension following the death of a STEG worker who was asphyxiated by the fumes of the industrial zone. Report.

The forum held during the Odyssey’s stopover in Gabes opened on Thursday, October 27 in a “village” of plastic tents in front of the high school. In spite of agreements in principle, officials did not provide the necessary authorizations for the science department’s classrooms to be made available for the occasion. Coincidentally, the forum began one day after the death of Abdelkader Zidi, an employee of the Tunisian Electric and Gas Company (Société tunisienne de l’electricité et du gaz, STEG), as he was crossing Gabes’ industrial zone. The death was likely due to a toxic gas leak at an ammonium nitrate factory of the Tunisian Chemical Group (Groupe chimique tunisien, GCT). Abdeljabbar Rguigui, member of the UGTT executive office, was present at the forum to testify. Before a crowd of several dozen people, he recalled that this was not the first time the lives of workers have been endangered by the chemical industry. 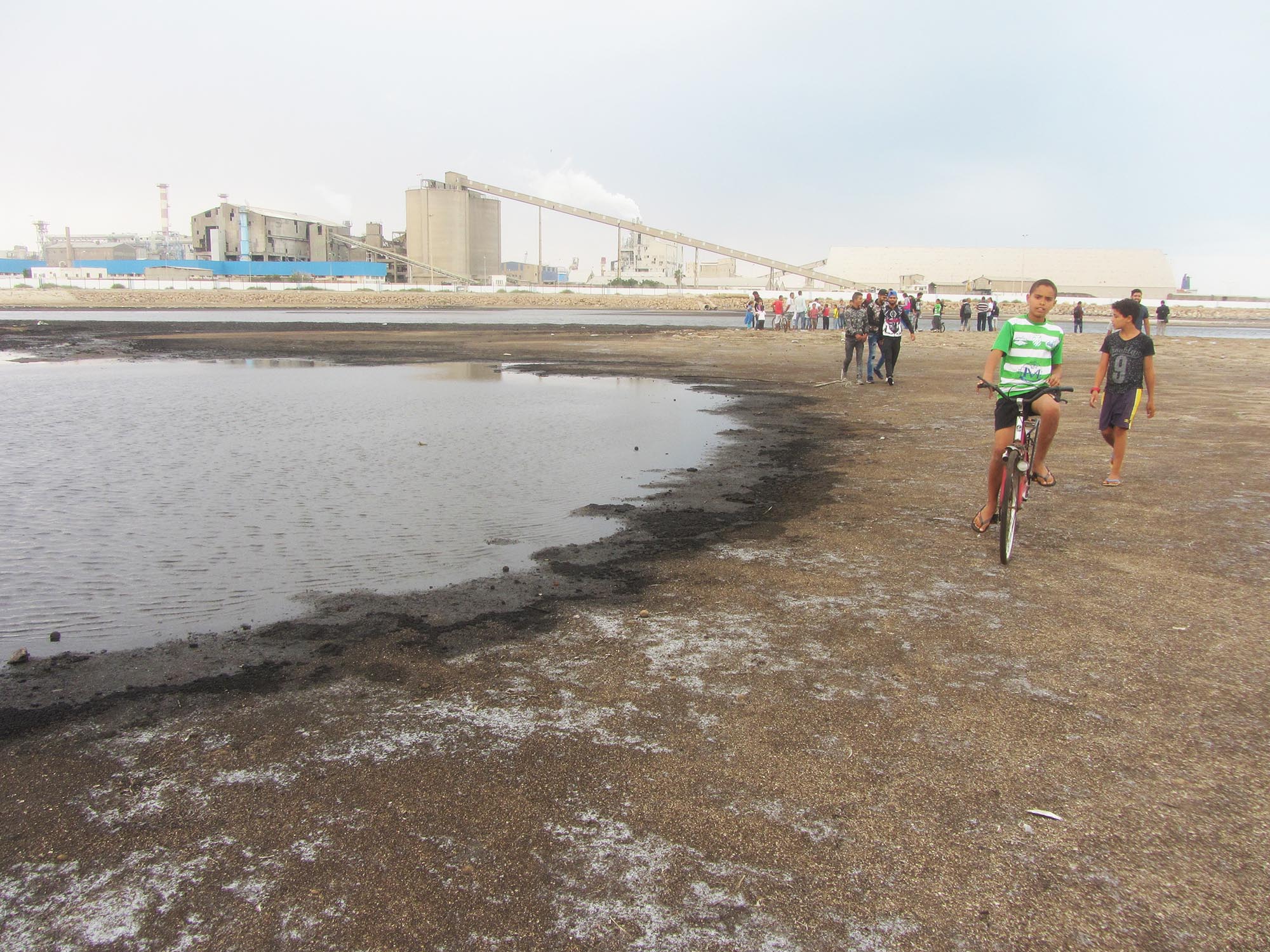 In June 2015, four workers suffered second-degree burns in an accident at the phosphoric acid production unit in Gabes. One year later, 17 employees of the GCT factory in Mdhilla were burned by sulfuric acid after a van exploded. One of them succumbed to his wounds. What’s more, Rguigui persisted, “many workers have lost their lives in silence because, for example, they suffered health complications after retirement… Our cause, it’s not tourism.”

In Gabes, the chemical industry has been part of the landscape for more than 40 years, and is the bread and butter of many families. “We can’t really close these factories,” says Rguigui. “After the revolution, the employment capacity of these factories doubled, and there were a lot of jobs. Before, we thought we could, in the long-run, replace this model based on the chemical industry. But with the problem of unemployment, what can we do?”

This question was at the heart of discussions during a workshop the next day focused on the topics of phosphate and oases, and which brought together Gabesiens, mine basin activists, and members of the Odyssey’s international crews. Some evoked how it has become commonplace for environmental norms to be flouted, both during the phase of phosphate extraction in the mine basin and also during the transformation phase in Gabes, Sfax, Skhira, or Mdhilla. They pointed out the social injustice in cases where, for instance, those who endure the impacts of environmental degradation due to exploitation do not have access to compensation, or where quality water goes to the industry instead of to a population vulnerable to water cuts, whose drinking water is fluorinated and salty, who believes that extraction is inevitable since phosphate is a vital national resource. 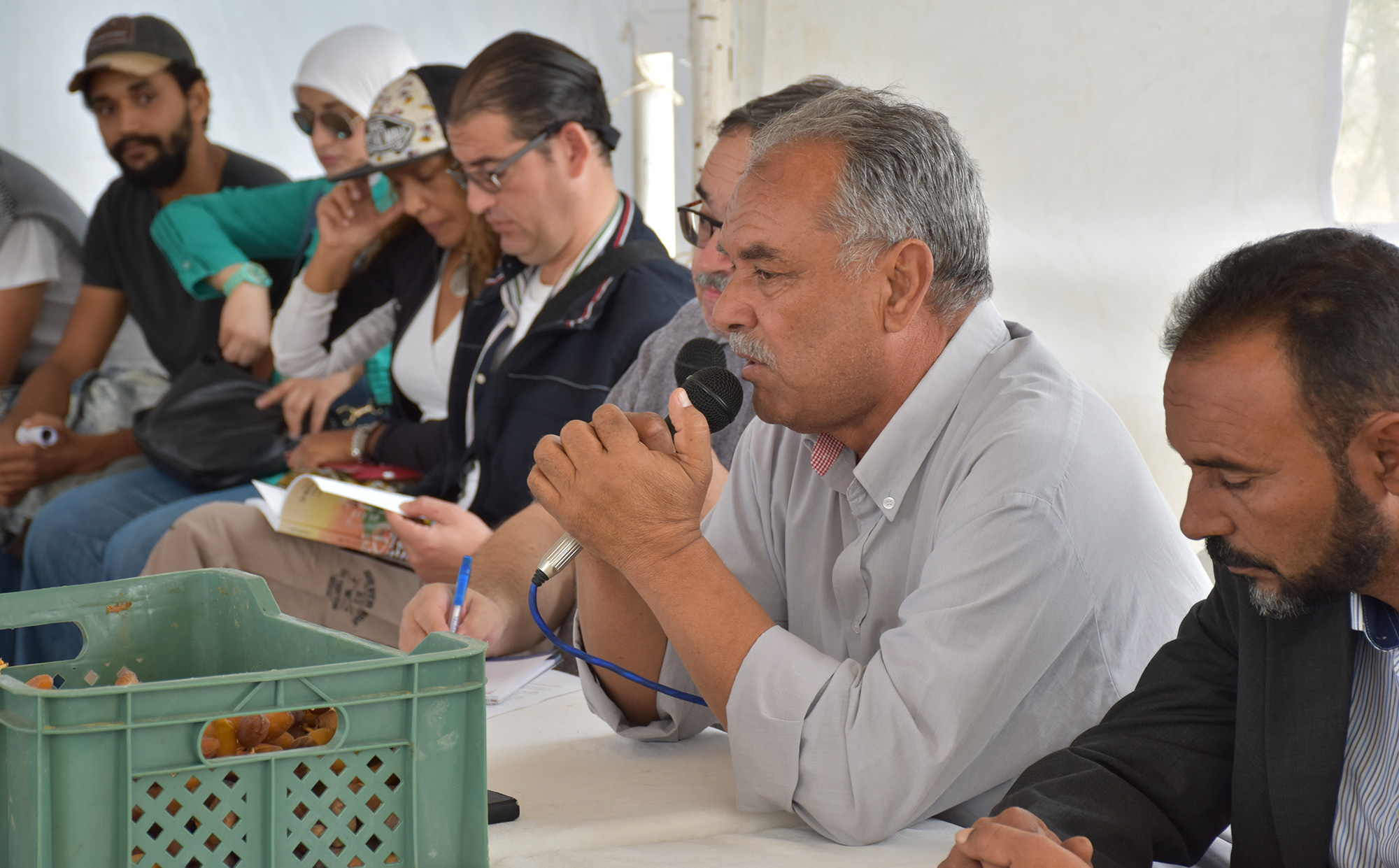 Others believe that it is possible to do without phosphate: there are alternatives, such as agro-ecology instead of industrial agriculture which is dependent on synthetic fertilizers, destroys biodiversity and exhausts resources: “We have to initiate the transition through local experiences that prove it is possible.” Such a transition is all the more important given that phosphate resources are not inexhaustible. At the current rate of extraction in Metlaoui, for example, the phosphate supply will not last more than 80 years. The creation of this city was, for better or worse, based on phosphate. What will become of it once all reserves have been extracted?

Participants also discussed modes of action and struggle: how to gather expertise to provide evidence of the links between pollution and health, how to take legal action in order to put pressure on phosphate companies, how to use the context of decentralization, which international experiences to draw inspiration from, how to coordinate between the two sides of the Mediterranean, keeping in mind that phosphate is also exported to France …

Behind phosphate which was at the core of discussions is the urgency of changing an outdated economic model that cannot ensure basic social welfare, let alone the environmental setting necessary for its sustainability. In this context, climate change and rise in gas emissions which produces the greenhouse effect will result in irreversible damages for biodiversity. Not only will there be dramatic social consequences, but also significant economic losses. 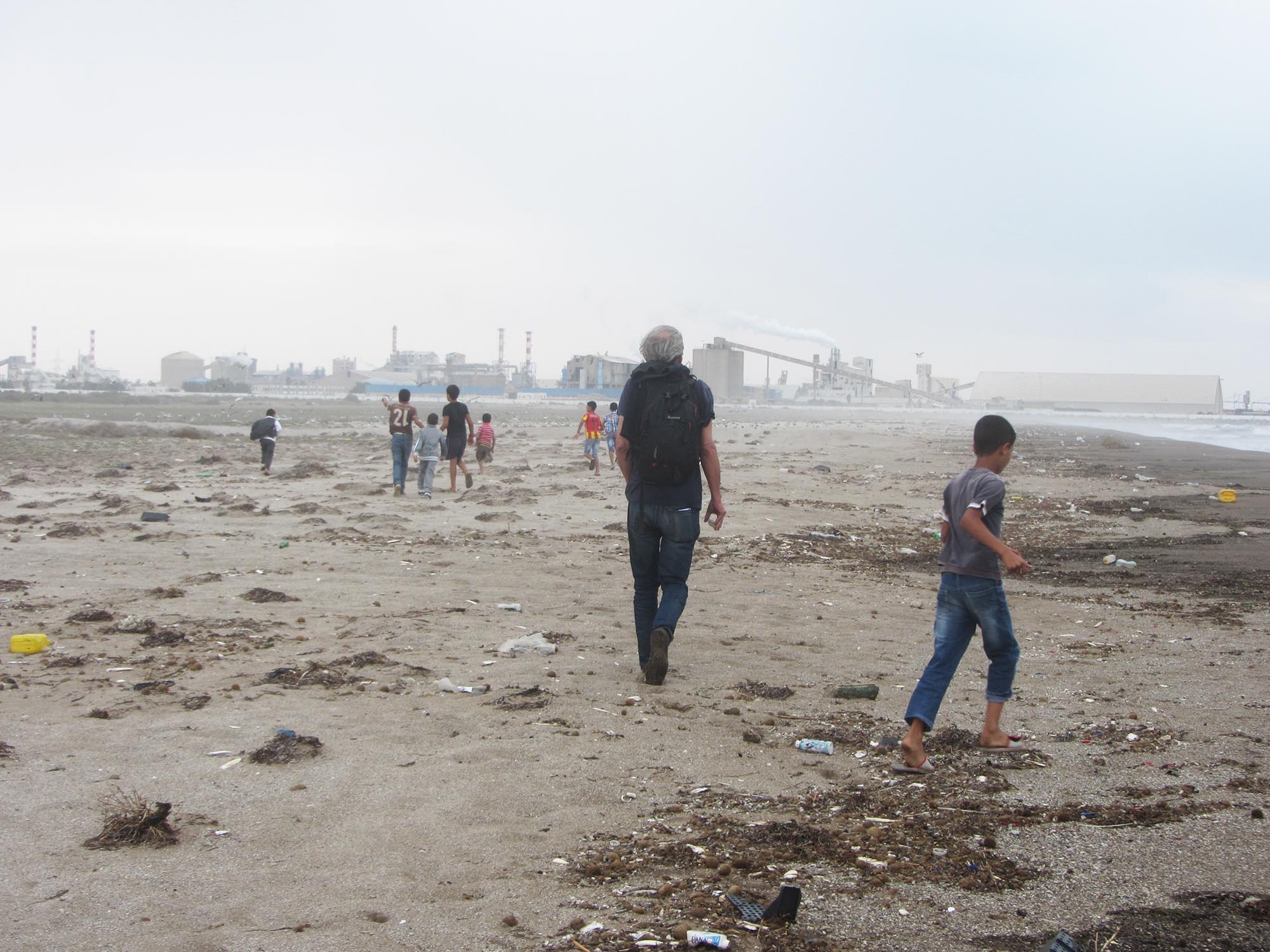 During the evening’s musical events on Friday, October 29, Wissem Sghaier and Khayreddine Debaya of the Odyssey’s organization team clarified the reasoning behind the stopover in Gabes, reasons which doubtlessly remained obscure for most of the public. “We chose Gabes as the stopover point for political reasons, because this city is among the most polluted in the country,” says Sghaier. “This pollution is the fruit of Tunisia’s economic policy. Political officials are incapable of finding solutions for people to be able to breathe normally. We need to come up with economic and social propositions, alternatives to the current economic model which degrades the environment and the climate. For this reason we affirm our full-fledged support for Jemna’s experience.”

The Association for the Preservation of Jemna’s Oasis was indeed present the following morning during a session on social movements and concrete collective initiatives. Members spoke about their struggle against the State to continue collectively managing State-owned lands, formerly neglected by a private investor affiliated with the Ben Ali regime and subsequently recovered during the revolution. “An experience like the one in Jemna can be seen as an alternative to work in the extraction sector—petroleum, gas—in the sense of developing a model that enables workers to live decently while respecting natural resources,” volunteers one participant.

Also present were members of the Environmental Protection and Recycling of Ettadhamen-Mnihla, an association of barbéchas who collect bottles and cans. “I’m thirty years old. Sorting garbage is how I earn my living. And it also helps to reduce pollution,” says Hassen Bouallegue, the association’s treasurer. “People in the Odyssey have commented that there is a lot of trash on the ground. I’m wondering what trash-collectors are doing. Taking a tour around the city, we only saw one. The activity of barbéchas needs to be developed in Gabes.”

Among the different initiatives and topics presented, the mobilization around COP22 and the two sides of the Mediterranean, the connections are not always immediately obvious. Representation and priorities diverge a little. While, for example, members of international crews place importance on respecting nature, the majority of Tunisians are perhaps more sensitive to the social dimension. Furthermore, even if the similarities shared between experiences and struggles are many, the contexts in which they take place are not the same. 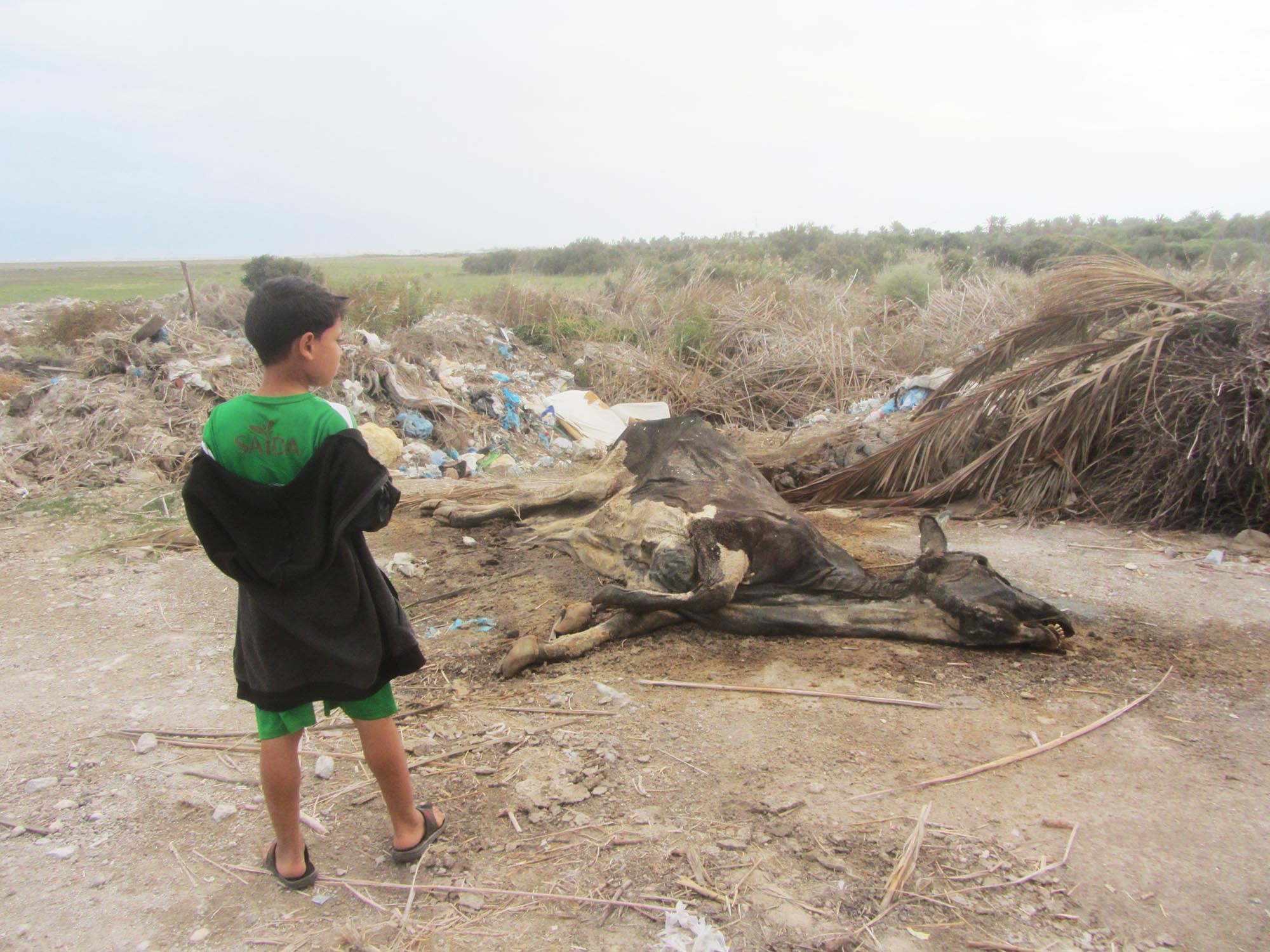 On Saturday afternoon, a visit to Chott Salem on the outskirts of Gabes close to the industrial zone, was an occasion for participants to discover a sad landscape which is inhabitants’ surrounding environment and their children’s playfield. The bright colors of their clothes are in stark contrast with the gray stretch of sand that, one imagines, must have been shades lighter several decades ago. Floating in a muddy sea were the bodies of fish—and tortoises. Tired looked the few remaining palms of the Mediterranean’s only marine oasis. Visitors spotted waste that had been dumped by the National Sanitation Bureau (Office national de l’assainissement, ONAS), breathed in the odors of phosphogypsum floating at the water’s surface, detected the noise of GCT’s dilapidated factories in the background. “We only stayed two hours, but my lungs are stinging,” complained on of the visitors.

Visitors, both foreign and Tunisian, were marked by the experience. “The regions in the south of Tunisia have little visibility,” says Nader Chkiwa, president of the Association for the Protection of the Chott Sidi Abdel Salem Oasis (APOCSG). “The visit today was an opportunity for foreigners to see the extent of the catastrophe that we live in Chott Salem and, perhaps for us to gain support for our problem.” For years, it was taboo to talk about this reality, and today, one has a bit more freedom to speak out, although the code of silence subsists. “Before the revolution, if we spoke, we died. Now, we speak till we die,” explains Chkiwa.

“The death of Abdelkader Zidi is proof of a crime that was once taboo, but is becoming clear,” he muses. The stopover in Gabes culminated at UGTT headquarters with a gathering in honor of Abdelkader Zidi in the presence of his family. Friends and relatives—and all who were present—shared feelings of pain and anger. Ramzi Khlifi, secretary general of the regional STEG union, denounced the attitude of GCT officials, who immediately denied their implication without a preliminary investigation. “Where are your air detectors? Where are the technical means to substantiate claims that you are not responsible? We want the truth. We are going to create an investigation commission. We will fight until justice has been served. Officials are saying that Abdelkader was afflicted with respiratory illnesses. But we all have respiratory illnesses here!” 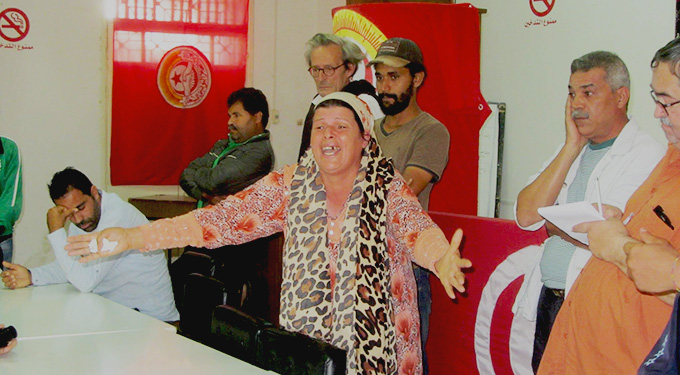 “The State does not see us as humans, but as simple numbers. My brother was nothing but a number. Those who die are not the children of officials and those in government,” observed Abdelkader’s brother.  His sister, in tears, emphasized that, like many families in Chott Salem, she is forced to borrow money to purchase medication.

With a voice that trembled a bit, Hervé Paris of the Odyssey team declared that work should not cause death. “It’s a shared combat. We are going to speak out, and carry with us the emblem of our friend who passed away. I hope that Abdelkader will be the last victim of pollution and work.” His portrait will travel with the crews to Marrakech.

In a room decorated with red flags, the emotion was palpable. The future remains uncertain as the crews continue their journey, as Gabesiens, particularly those who live around the industrial zone, continue to hope for the right to breathe, as public authorities continue to deny evidence of a catastrophic environmental situation.