With summer on the way, Tunisia’s southern city of Médenine is slowly and timidly emerging from its winter lethargy. Days become longer, evenings slightly more accessible, and events begin to animate public spaces, and, most importantly, outdoor spaces. 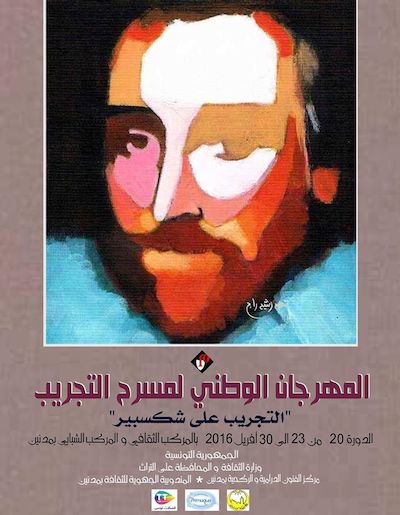 The 20th edition of the National Festival of Experimental Theatre of Médenine is the first of these seasonal events. Coinciding with the 400th anniversary of Shakespeare’s death, this year’s festival is dedicated to the British poet and playwright. For one week, the stage will be set for plays—of varying degrees of intensity and fidelity—dealing with Shakespearean themes and characters.

Between the 23rd to the 30th of April, the festival will draw the population of Médenine day and night into theaters in- and outside of cities. Indeed, while the main evening’s events take place in the Centre Culturel and the Centre des Arts Dramatiques et Scéniques de Médenine (CAD – which has been responsible for the organisation of the festival since 2011), other activities are performed in less formal spaces as well as in nearby towns.

Though mainly composed of Tunisian artists from different parts of the country, the festival also features a theatre company from Egypt and one from Algeria—a step forward for the organizers of the festival, who aspire to give this event a more and more international scope.

“It would be good for us who work in the field to exchange and share experiences with international artists,” says Ali Yahyaoui.

It would be also good for our public to attend, for example, theatre pieces by European artists. To learn something new, to be in contact with different viewpoints. But, little by little, we are growing and advancing.

Mr. Ali is a man with light-coloured clothes and a grey basco hat which casts a shadow over smiling eyes. Each night of the festival after the main shows, Yahyaoui stands at the door of the Centre des Arts waiting for people to join the debate. He moderates the sessions in the tiny hall of the centre, sessions which are never too crowded but which nonetheless never lack animated and intense discussions between spectators, theatre experts and artists. Originally from Tataouine, Mr. Ali is himself playwright and director, and he has worked at CAD Médenine for three years. He welcomes me into his office for a talk.

Médenine is still a rural city. We are still dealing with many important issues concerning rights and equality. What I am interested in, by doing theatre, is the notion of citizenship, which here is still weak.

But this thought coexists with an interest for the folklore and the tradition of his land. The first thing he shows me when I enter in the office is a curious wooden table. It is the “scenario” of his latest work, Sable mouvant, for which employs the technique of sand art. Experimentation in the technique goes hand in hand with research and elaboration on traditional themes. The desert is the protagonist of this performance; Saharan landscape will be shaped by a visual artist from Médenine, and accompanied by Amazigh sounds. 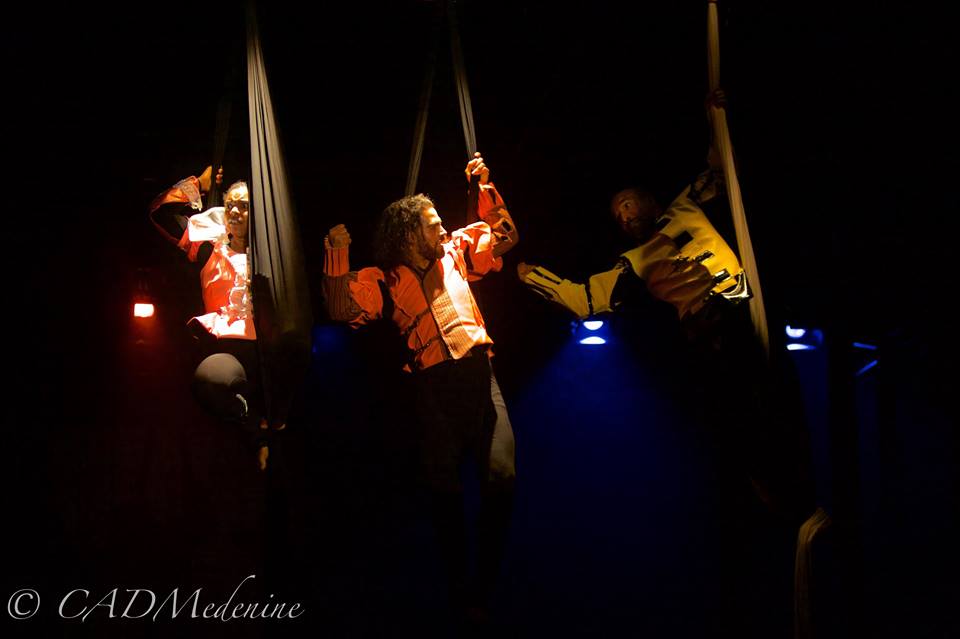 The use of multiple techniques is also a theme of the festival. “Nowadays theatre and art are more and more performed in the streets. What we do is to try to bring the streets inside the theatre.” The festival’s opening show, by Mr. Ali’s colleague Anouar Chaafi, takes this direction. Aw la takoun is a play based on the couples of four Shakespearian tragedies—Romeo and Juliette, King Lear, Othello, and Hamlet—which focuses on racial and women’s issues. But the real innovation of the piece is the scenic design: the actors move up and down the stage using the circus technique of aerial tissues.

The festival’s main pieces experiment with Shakespeare, transform it and decline it according to disparate needs. In addition to Chaafi’s acrobatic production, there is the postmodern version of Hamlet, called Hamlet Machine (the end of study project by students of the Institut Supéreiur d’Art Dramatique de Tunis), which deals with the loosing of self and alienation in contemporary society. Another play called Tahta al Stah (also by ISAD students) is a comical mise en abyme about a family struggling with Tunisian social illnesses. In Nisa’ Shakespeare (from Egypt), Shakespearean female characters revolt against their creator. 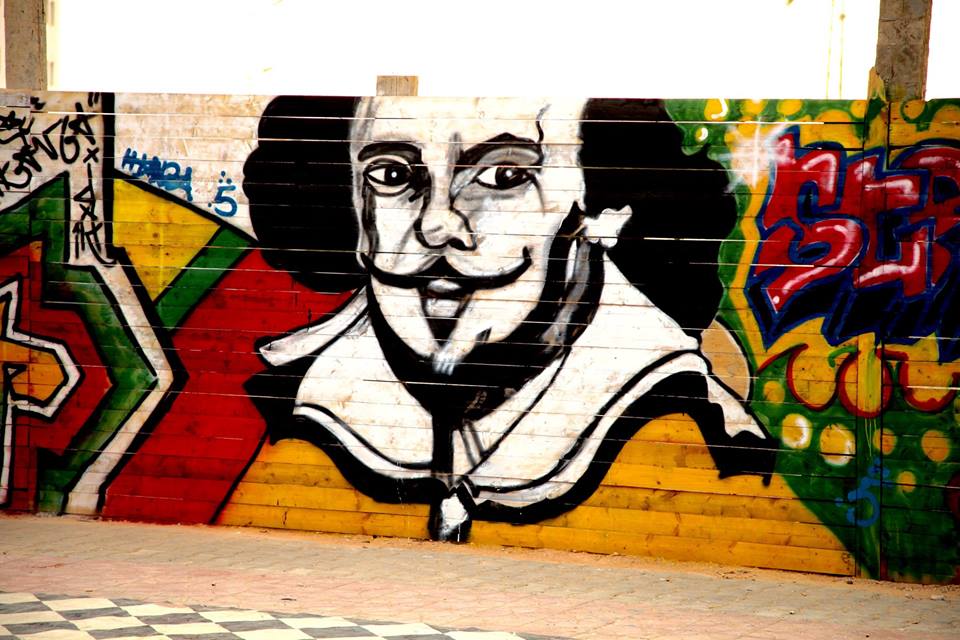 But beside the main shows, the days of the festival are to be full of activities, not necessarily linked with theatre. The space outside the cultural complex will welcome different groups of youth practicing graffiti, break dance, folklore, and circus. An art bus, C’ART, animated by a company from Sfax, will feature among activities, transporting street artists, clowns, acrobats and actors throughout the streets of Médenine and surrounding towns for outdoor and stages and shows.

“The festival aims to enable as many people as possible to participate in cultural events, to bring art into the streets and peripheral areas,” explains Jamal Chandoul, artistic director of the CAD.

For the first time we also have a daily program of plays for children, which will take place in the Maison des Jeunes of Médenine.

Among these shows, one targets deaf-mute children in particular. Ideas are not lacking, the festival tries to be as transversal as possible, and the local participation is positive.

The problems are financial. The funding is missing. But finally, work for the extension of the Centre des Arts has started. Finally we will have a real theatre for performances.

Indeed, for the moment, CAD does not have a real theatre, which is why the main plays are taking place in the Cultural Centre. “But as much as we can, we try to give youth spaces and tools to work and rehearse.”


The festival is also an opportunity for local artists, actors and authors to perform and to present their work to a wider public. I have a conversation with Jalal Hammoudi, a young playwright and theatre director from Médenine. For this festival, Jalal presents a piece by British playwright Sarah Kane, Psychosis. The play’s main theme is depression, for which the author herself committed suicide just after writing this last piece in 1999. The play, part of Jalal’s theatrical experimentation, due to its research about human relationships, especially between man and woman. But his exploration of the human psyche is linked with his political agenda in theatre. “The aim of the theatre is politics,” he quotes Brecht, one of his main master. Jalal is the author of plays more strictly related with the political situation of Tunisia, pieces such as Sacré which was recently presented on stage in Médenine. Working with all amateur actors, young students of Médenine and Ben Kheddesh, a nearby town, Jalal is one of those youth who tries to push for a change in his community through art and culture. 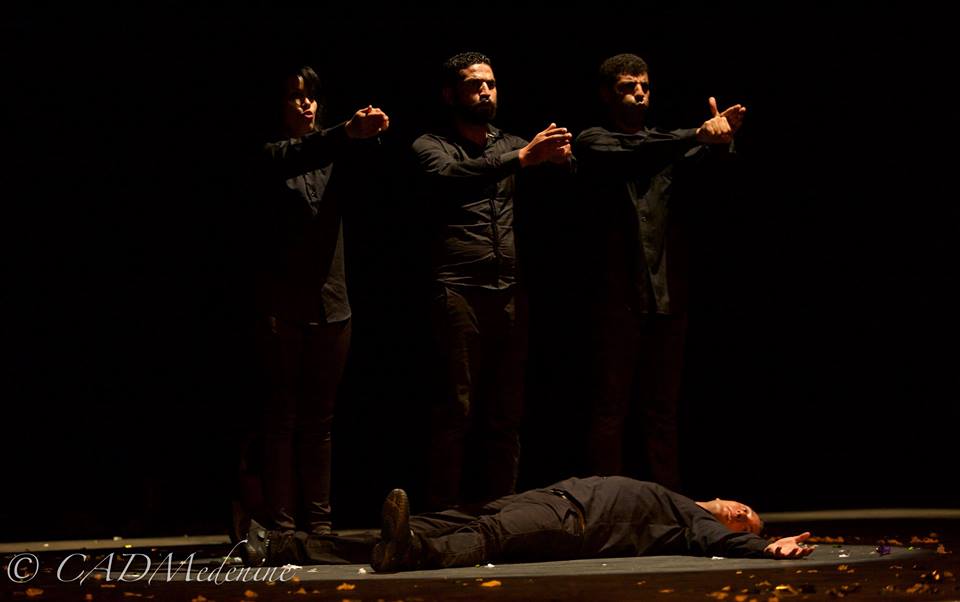 The consistent number of spectators and amateurs who participate in the festival bear witness to the thirst for art and culture in Médenine, and, more simply, the thirst for collective moments, for public spaces and the possibility to gather, meet, discuss.