The women are many and of all ages gathered before the delegation headquarters of Jebiniana, home to more than 44,000 inhabitants. Some are carrying young children in their arms. At first glance they appear to outnumber the men, which doesn’t surprise anyone. “Of course there are more women; they are misery’s first victims,” proclaims Wassila, who has come to demand a salary raise.

Skilled workers are paid 236 dinars, and all that we ask is that our salary match the SMIC [minimum wage], which is 316 dinars

“Skilled workers are paid 236 dinars, and all that we ask is that our salary match the SMIC [minimum wage], which is 316 dinars.” They’ve been here for the past two weeks and have no intention of letting up, so strong is their anger. “Who worries about the unpaid electricity bill? Who worries about her son who won’t be able to replace his beat-up shoes? Who worries about not being able to prepare a meal for her children? Women!” exclaims Selma, the worry and fatigue evident in her eyes. The promises of authorities, repeated like a broken record, have only added insult to injury. 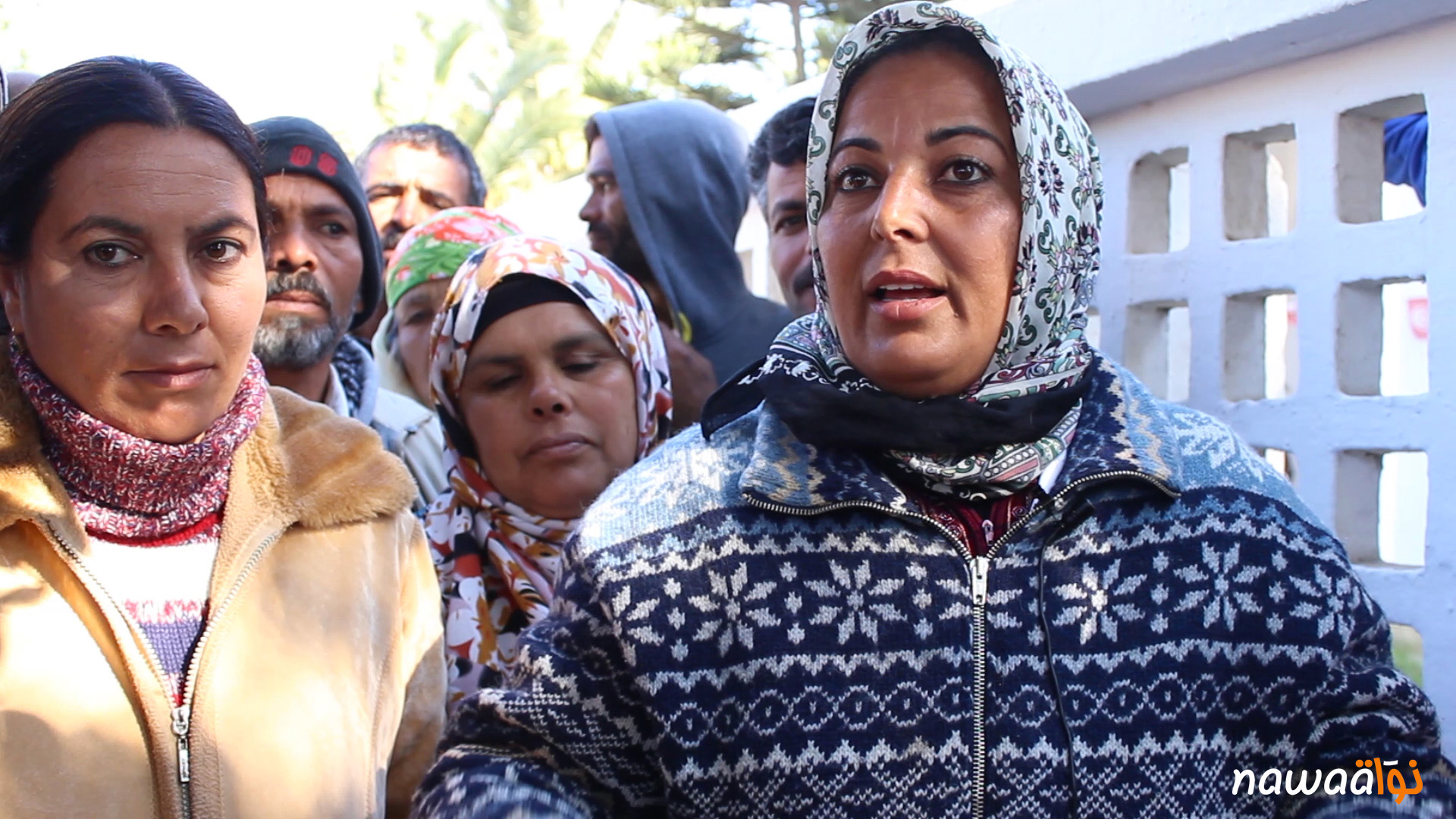 According to Jamil Ben Romdhan, spokesman for the skilled workers present, nothing has been done for Jebiniana, neither before nor after the revolution. “Since 2011, we have continued demonstrations, gatherings, negotiations with the governor, and all that we have had are empty promises,” he says indignantly. On this particular day, demonstrators are demanding raised salaries, tenure for workers, and access to social security.

In the governorate of Sfax, Jebiniana counts the greatest number of skilled workers, currently 450. But it’s a very precarious status that must be reformed.

But it is the region’s overall economic situation that demonstrators denounce: “Our youth are unemployed, our women are marginalized, the governorate of Sfax allocates us a minimal budget while the city of Sfax holds a lion’s share of funding, factories have closed, and those that remain open pollute the air we breathe. There is nothing left in Jebiniana, it’s a city left to fend for itself,” explains Mounira Bhiri who has not missed a meeting since last week. Since 2005, a number of factories have closed, and today the industrial zone is nearly deserted. Employment opportunities are rare. On Monday, January 25, demonstrators didn’t hesitate to force open the door of the delegate building—although the army was supposed to prohibit access—to continue their protest inside.

Sabri El Ghali, coordinator of the Union of Unemployed Graduates (UDC) in Jebiniana, reports that the precarious status of workers and the continually growing number of unemployed graduates has rendered the situation explosive. Residents have the feeling that they have been forgotten. “Employment and education should be the government’s priority, and yet still today there have been no clear propositions. During our last meeting with the first delegate, he finally told us: go demonstrate, do whatever you want, in any case I don’t have any solutions to propose,” says El Ghali who worries for the many families in the region who live below the poverty line. 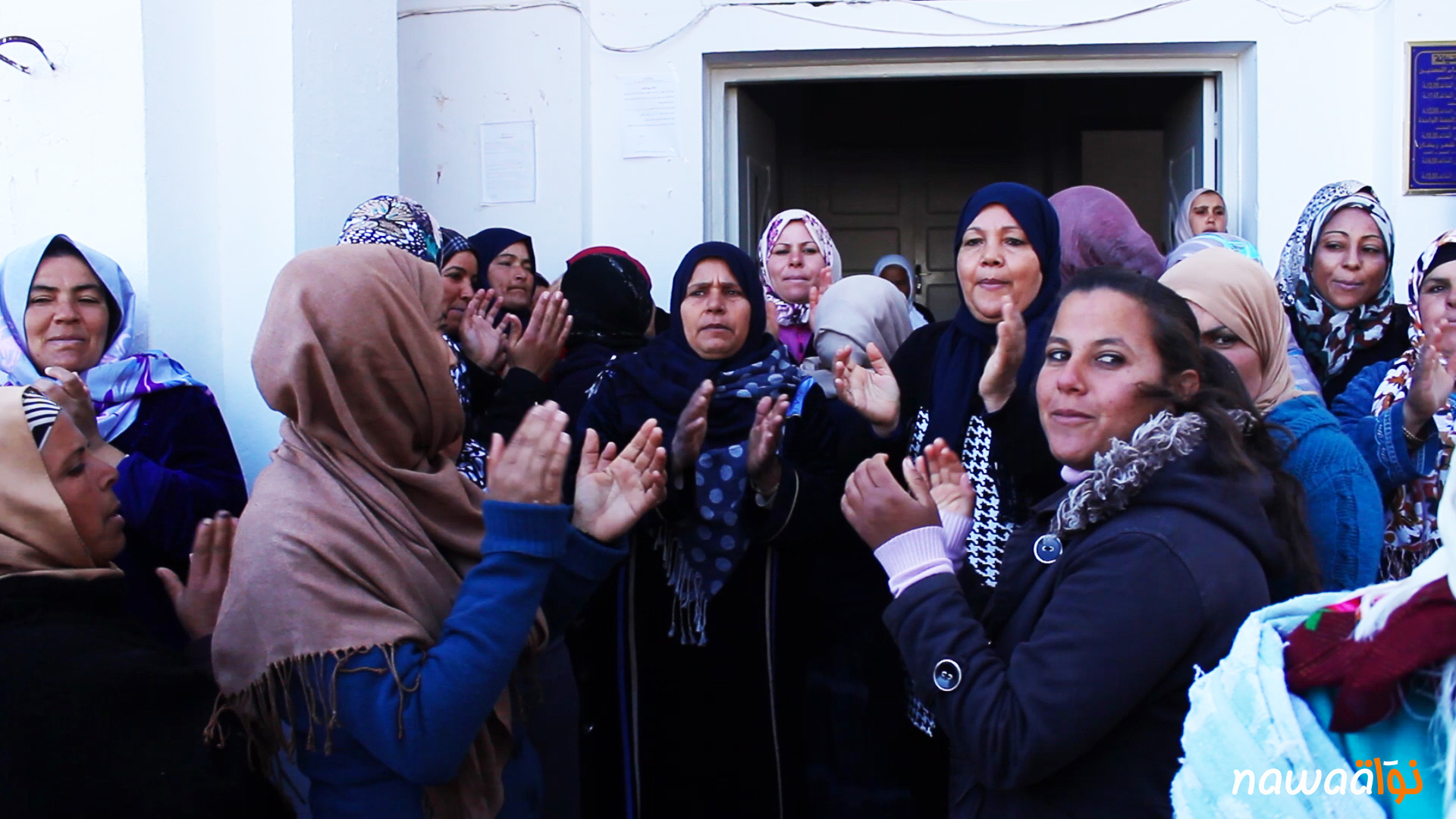 A history of resistance

Oftentimes it is women who feel responsible for this misery. So they do whatever they can to meet their families’ basic needs and find themselves forced to bear sole responsibility for this heavy load. “The misery of women in Jebiniana is accentuated by problems of alcoholism. The little money brought in by a father, a brother, or a son will be used to purchase alcohol instead of to feed the family,” remarks Kmar Ennaili, president of the Women’s Association for Family Protection (AFPF). None of the women will say as much in front of the camera. Standing outside the crowd, a woman—thirty-something and weary-faced, indicates however that she is the only one in her family who works: her mother takes care of the house, and her father and four brothers spend their time sitting in cafés. She offers the excuse:

My father is sick, and my brothers are young. I am the oldest, so it’s up to me to take on the responsibility.

How am I supposed to respond to my six year old boy when he tells me, ‘I’m tired of this life’ ?

In front of the delegation building, Fethia Louhichi gravitates towards wherever the voices are raised, steps in to give her opinion, and then joins another group. “The woman of Jebiniana—no one understands her and no one has compassion for her. I’ve seen nothing but disdain.” A skilled worker and mother of three, Louhichi struggles daily to provide for her family: “Sometimes, I don’t have the means to care for my children; imagine those who don’t even have work.” Louhichi is overcome and cannot hold back her tears. The desperation of women in Jebiniana is great. “How am I supposed to respond to my six year old boy when he tells me, ‘I’m tired of this life’ ?” she asks, her voice choked. And yet Louhichi and others are nowhere near ending their combat. In this devastated city, activism is a part of their history. “Don’t you remember that there were already pockets of resistance here in Jebiniana during the time of Bourguiba?” exclaims Mounira Bhiri before citing the Tunisian expression, “May we all live in dignity or all die.” 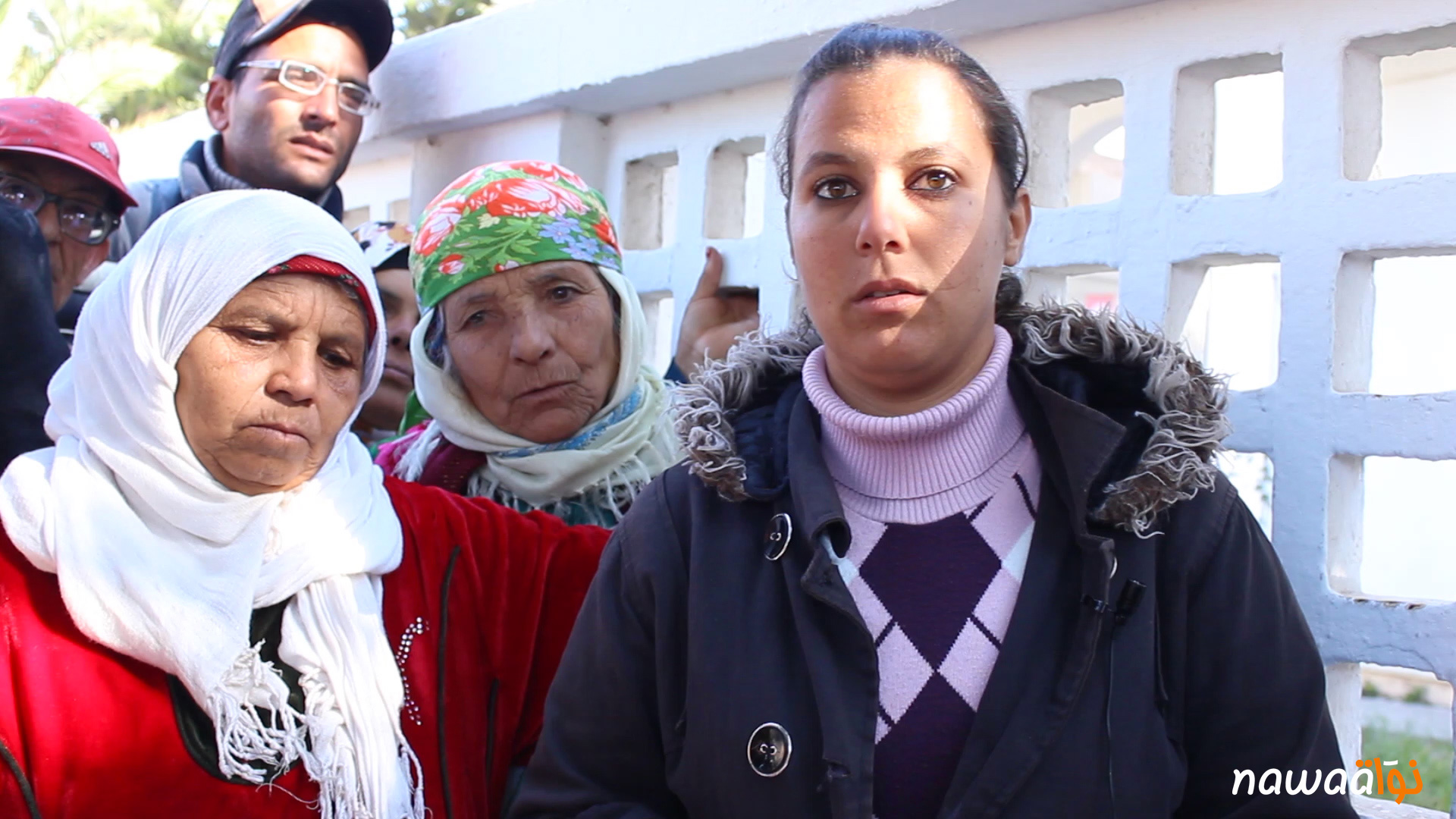 The AFPF is working as best as it can to address employment, social inclusion and youth support, but the challenges are tremendous. And so it is through little projects that activists within the association have decided to focus their efforts: workshops for sewing and baking to encourage the financial independence of women; citizen education and awareness-raising, children’s activities. “It’s work over the long-term, but we can already see the fruits and this motivates us to continue our actions,” remarks Kmar Ennaili. Indeed, it is action that will be necessary to help these women who seem to bear the weight of the world on their shoulders.