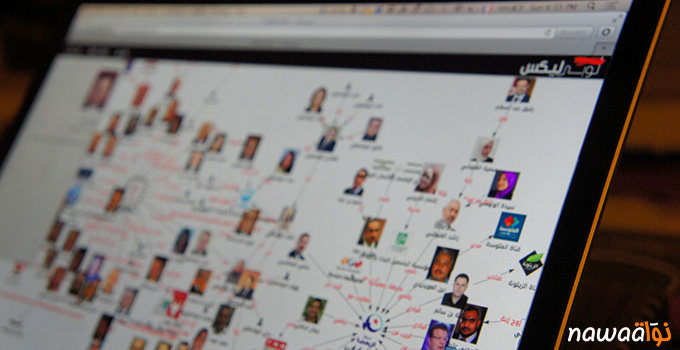 By Teycir Ben Naser, translated into English by Bilel Sfaxi.

It is not a secret that lobbies exist in Tunisia. But who are these influential groups that make and demolish the political decisions ? Tunisian activists, who call for more transparency, tried to shed some light one these networks through a network graph which is likely to shake these opaque and complex spheres.

« We are a small group of independent voonteers ». It is all that one of the founders will say to me on the identity of the people who designed the Lobby-Leaks website. He wishes to remain anonymous and we will call him Mehdi for this article. Mehdi evokes two obvious reasons for why he choose anonymity: to protect himself from the potential threats and to dehumanize the project. And to insist: « it is a collaborative website, and there is no good reason to know the identity of the people behind the project since it is about a community ».

Launched two weeks ago, Lobby-Leaks records already tens of thousands of visits. It is about an information platform which, in the shape of a cobweb, allows to identify the ties that exist between the influential personalities of the country and the political, media and financial lobbies. These lobbies, or interest groups, have in particular as aim to influence to their favors the public decision makers in the legislative process.

After analyzing closely the Tunisian political situation that the founder of Lobby-Leaks had the idea to create this platform:

When one looks closely to the decisions taken on the level of the Assembly or the government, it is not difficult to note that there are stakes which exceed these institutions and that national and international special interest groups try to influence the political choices according to their interests.

It is not a secret for anybody: the lobbies weigh on the political decision-making processes. « In fact nebulous who work in the shade but when using knowledge, it is possible to better measure the stakes which are currently played in our country », indicates Mehdi.

Thus, by creating this platform, the team of Lobby-Leaks wishes to shed some light on the many bonds that exist between the worlds of media and finance on the one hand, and the political world, on the other hand. In order to facilitate research, the components of these networks are divided into two categories: the typology of the actors (political parties, associations, companies, journalists, etc), and the nature of the bonds (family, professional, etc). The objective is triple: (1) to inform the citizens about the existence of these circles of influences and the nature of connections that exist between them; (2) to establish a culture of transparency that supports a democracy in which the general interest takes precedence over the particular interests; (3) to encourage the citizens to take part in the political decision making process and to play the role of counter power.

From democracy to the lobbycracy? 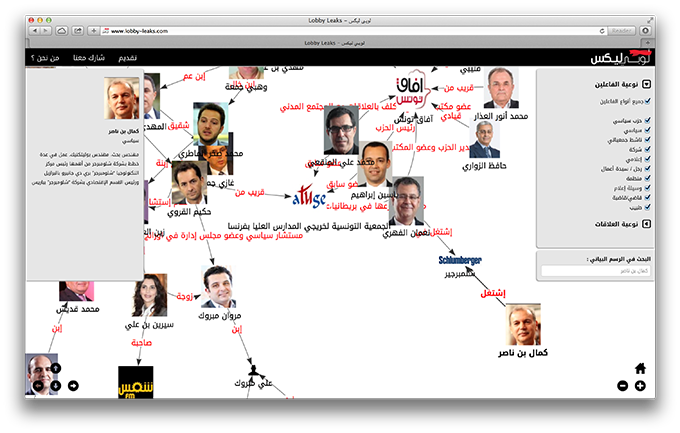 What is the bond between the current Minister of Industry, Kamel Bennaceur and Schulmberger, which is the greatest multinational oil services in the world? And that of Noureddine Aouididi, director of the private TV station Al Moutawassat and Ennahda? Or the bond between Microsoft Tunisia and Nidaa Tounes? Thanks to this platform we can from now on evaluate the existing conflicting interests. Because basically, what is most awkward,the existence of these lobbies, which are a global phenomenon that became an integral part in the democratic system, or the conflicts of interests which rise from the overlap of these circles of influences? For the founder of Lobby-Leaks, the challenge is to limit the influence of these lobbies, since the Tunisian State is still so fragile and does not have – like other countries – sufficiently solid institutions to defend its interests.

In Europe, for example, there are laws which govern the lobbies, there are citizens active within social society NGOs working to control the impact of lobbies, there are several independent control mechanisms and processus: in short, there are a wide set of tools that allows shape a framework for the action of the lobbyists, explains Mehdi.

According to him, the danger is to leave to these circles of influence too great room for maneuver and to concede ipso facto to them the prerogatives which return exclusively to the State bodies. With the risk to slip gradually towards a lobbycratic system in which the interest of the lobbies will take precedence over the interest of the Tunisian people.

In addition, Lobby-Leaks proposes to know the family ties that exist between these various public personalities. Thus, when we only tick the box « family relations », the visualization shows that the influence of the great families is always a news item. It is, however, legitimate to wonder if the families can be really regarded as lobbies? For instance: in what is the bond between Sihem Ben Sedrine and Ahmed Nejib Chebi (cousins by alliance) could be connected with lobby?

Family ties must be taken into account because they explain certain alliances, not all, but a great number: Tunisia is still marked by the weight of the big families, who have naturally interests to preserve, justifies the founder of Lobby-Leaks.

In the pursuit of information 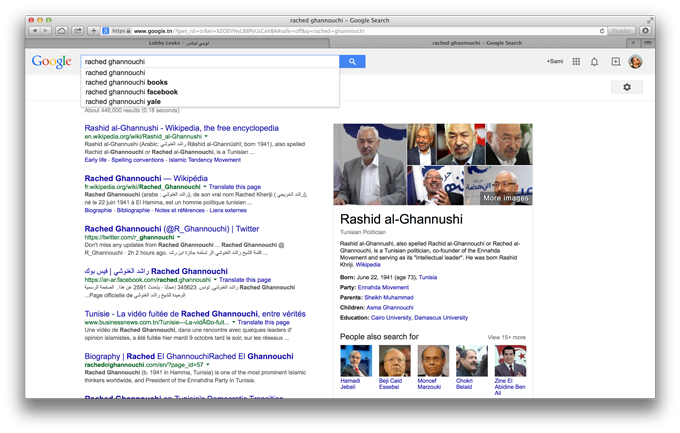 Where does these data come from and how can we ensure their authenticity? According to Mehdi, his first source is the Internet: by typing names of public personalities, it seeks to build information which can be found on various Internet sites, « without never being selective » he insists.

Lobby-Leaks, being a collaborative platform, receives also information a crowdsourcing approach. Lastly, the word of mouth is also taken into account by the team « We are still in a culture of orality », notes Mehdi. And to insist: « each information that we find or receive is recut and checked ». On the other hand, « all is not there, there is still much material to add; the site evolves on a daily basis ». It is exactly to the point: the network map gives the impression that research – at least in its first version – is concentrated on the two greater political parties of the country, namely Nidaa Tounes and Ennahda. Mehdi defends: « we rather do not have access to our research on a party than another, but that testifies owing to the fact that we should be highly politically involved to weigh politically ». It is also astonishing not to find personalities such as Mustapha Ben Jaafer or Noureddine Ben Ticha in the cartography.

in the near future , the team wishes to analyze the strategies of influence through studies and articles in order to promote the transparency and the citizenship consciousness. If the current version of the site could be improved, it has the merit to raise fundamental questions in the young democracy which is Tunisia and to foresee the slides of the decision-making centres.