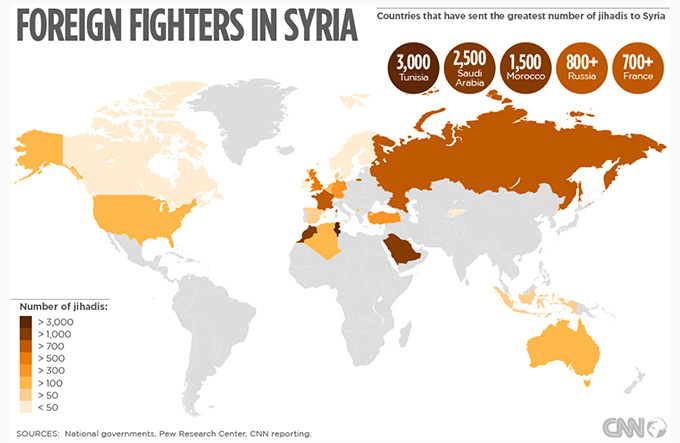 Naturally, countries with bigger Muslim populations tend to send the largest number of fighters. Richard Allen Greene and Inez Torre, Syria’s Foreign Jihadis: Where do they come from?, CNN.

The beginning of September has seen a flurry articles on foreign “fighters,» «jihadis,» «militants,» «terrorists» who have traveled from across the globe to fight in Syria. What these reports share in common, no matter where their headquarters are located and what their resources, is that the trends discussed are generally impossible to quantify except by estimation which therefore constitutes much of the data that informs country-to-country comparisons1 of those who have left to fight in Syria.

Since last year, Tunisian media, already hard-pressed to obtain official statistics and data from government institutions, have drawn largely from foreign media reports on this topic. On 24 July 2013, Kapitalis reported that Tunisia Totals the Greatest Number of Jihadis Who Have Died in Syria indicating that «1,902 Tunisian fighters have died fighting alongside the Free Syria Army and jihadi groups deployed in the country.» The supposed source of information was the “American PentaPolis Agency for statistics”, for which there seems to be neither website nor trace online except in articles referencing the alleged report. This September, in an article entitled, Tunisia, the first exporter of jihadists in Syria, L’Economiste Maghrébin announced that «The number of Tunisians who have joined in Syria is reported to be 3000,» incorrectly attributing the information to a “report recently published by the Pew Research Center.”

Reporting Through the Grapevine

Even if it is for the lack of up-to-date and relevant data produced and diffused by Tunisian government institutions, that Tunisian media draws from foreign mainstream reports without questioning the validity of the data, analysis, or sources used–reporting through the grapevine, as it were–is a practice that diminishes rather than enhances the quality of dialogue on current issues. Noteworthy, for example, is the number of news agencies that have referenced the 1 September CNN International piece and imprecisely or incorrectly attributed it to the Washington-based non-profit Pew Research Center.

The confusion is certainly an effect of imprecision, first in the “Sources: National governments, Pew Research Center, CNN reporting” citation of the original article, and subsequently on the part of news agencies whose lack of attention to detail have resulted in misattribution. While CNN has yet to respond to our request for specification of sources (which government institution(s), for instance, provided the data for Tunisia cited in CNN’s study?), the Pew Research Center has at least clarified that its own contribution was the «overall Muslim population numbers (just one column of that bottom table), not the foreign fighter estimates. The problem is that every graphic has the same source line» which originates from a 27 January 2011 study on The Future of the Global Muslim Population.

The CNN study features three maps—«Countries that have sent the greatest number of jihadis to Syria», «Countries with the greatest percentage of Muslims who have gone to fight in Syria», «Muslim population of the top five countries that say jihadis have gone to Syria» and one table displaying the «Muslim Population», «Number of Jihadis», and «% of Muslims Who Have Gone to Fight», for each of the 25 countries included in the report. A lack of definitions, sparse explanation, and the absence of analysis either (a) presumes a well-researched, well-informed reader and/or (b) intends for the reader to draw his/her own conclusions based on the information presented and/or (c) takes for granted the significance of certain vocubulary and stereotypes thus reflecting an assumption-based approach that is so common in Western media reporting on the MENA region. Including a case- or study-specific definition of words such as “fighter” and “jihadi” would be a simple and appropriate detail to indicate sensitivity to the fact that people’s motivations for going to fight in Syria are variable and ill-understood and can by no means be solely or even generally described as religious.3 In this sense, the very foundation of the CNN study—which ostensibly seeks to answer a valid question pertaining to Syria’s foreign fighters -«where do they come from?» -not only takes for granted the complexity of the flux of foreigners to Syria, but more gravely feeds into the West’s stereotypes and misinformation about the distinction between religion and extremism, particularly Islam and Islamism (eloquently demonstrated in the quote at the beginning of this article).

i. Defining Words is Defining Ideas

If a recent International New York Times article also refrains from making clear this distinction, it does so with a contrastingly transparent context and purpose. Whatever our response to Islamists Are Not Our Friends, significantly published on September 11, we understand that the author, «a counselor and fellow at the Washington Institute for Near East Policy, was the United States chief negotiator for the Arab-Israeli conflict from 1993 to 2001 and a special assistant to the president for the Middle East and South Asia from 2009 to 2011», has a well-defined message based upon his own personal, discernable perspective. Offering his recommendations to the Obama administration, the author advises,

…do not reach out to Islamists; their creed is not compatible with pluralism or democracy. In Tunisia, the Ennahda party surrendered power only when it realized its policies had produced such a backlash that the party’s very survival was threatened. Islamists, even apparent moderates like those of Ennahda, must be left with no choice but coexistence. Dennis B. Ross, Islamists Are Not Our Friends

Published under The Opinion Pages, Ross’ piece justly presents a biased argument where it can serve as a prompt to quality, self-aware discussion, as opposed to the “CNN reporting” piece whose biases are unexplored and undefined. That said, Ross’ explicit denunciation of Islamists and his comments concerning Ennahda in particular may be provocative to many readers in that Ennahda has specifically–and often successfuly, from a Western perspective–sought to demonstrate and embody the very idea that Islam is “compatible with pluralism or democracy.” Middle East Forum President Daniel Pipes‘ 1998 analysis Distinguising Between Islam and Islamism captures the importance (most notably in post 9-11 American media and forums) of defining the vocabulary that we frequently, and as a consequence, loosely, use in discussions as an expression of and mechanism for grasping complex concepts:

Despite the fact that the West is a bystander, we on the outside must protect our interests. To start, in devising strategy towards Islamism we must very specifically and very repeatedly distinguish between Islam and Islamism. I am talking about developing a policy toward Islamism, not Islam. States do not have policies towards religions, but they do respond to ideologies. The American government and the American people must be clear about this distinction. Daniel Pipes, Distinguishing Between Islam and Islamism

«On 12 May 2013, Othman Jerandi, Minister of Foreign Affairs, announced that 800 Tunisians were fighting alongside Syrian rebel forces,» a Nawaat contributor reported in Tunisians, Prisoners of Jihad in Syria in June last year. «The radio station Express FM announced that an estimated 132 Tunisians died in February alone in clashes in Aleppo. On 12 March, the news outlet Chorouk published a list of several dozens of Tunisians, many from Ben Guerdane, killed in Syria.» This year, Agence Tunis Afrique Presse (TAP) reported, during a discussion on national security that took place at Assemblée Nationale Constituente (ANC) headquarters in Bardo on 23 June, Minister of the Interior Lofti Ben Jeddou stated that there are some 2,400 Tunisian jihadis in Syria, and that the Ministry has prevented between 8,700 and 8,800 from joining their ranks.

Reiterating what the Nawaat article alludes to as «the lack of reliable data and information on the methods of travel to Syria» that renders precise numbers virtually impossible, Richard Barrett of the Soufan Group2 articulated in his 2 June 2014 report Foreign Fighters in Syria,

Some countries have publicly or privately provided official estimates for the numbers of their citizens or residents who have gone to fight in Syria. These figures are based generally on information gathered from social media, community sources or investigations. Inevitably, they tend to underestimate the true numbers because would-be foreign fighters who wish to keep their activities secret have little trouble in getting to Syria without anyone knowing, and while there can conceal their identities. Furthermore, the groups themselves are not known to keep detailed records of who joins them. Richard Barrett, Foreign Fighters in Syria

Comprehensive and comparatively well-documented, the report includes a table featuring 81 countries that «have provided numbers or estimates of their citizens or residents who have gone to Syria to fight, though some have now returned or died» in which is listed «Tunisia: about 3,000 (Official Figure, April 2014).» After contacting Mr. Barrett regarding the source of this datum, he responded that the number is «an official figure provided indirectly to the Soufan Group.»

Whereas biases are inevitable and necessary in any authentic discussion on current events, they are conducive to thoughtful, critical dialogue when they are well-informed and intentional biases, when they represent a defining feature of one’s position or argument as opposed to a limiting factor thereof. That the vaguely-cited and minimally-elaborated CNN piece should be widely-referenced in news reports is indicative that an already complex issue is rendered ever more elusive by an imprecise presentation of information which impedes rather than enriches understanding and insight.4

1- Country-to-country comparisons include the CNN piece, The Soufan Group report, and the International New York Times’ How ISIS Works (see below, Note 4) considered in this article, as well as The Economist’s 2 September 2014 Stranger in a strange land.

2- “The Soufan Group was established with a single overarching vision: to leverage the expertise and real-world operational experience of a select cadre of intelligence, law enforcement, policy analysis, and security professionals in resolving the most important geostrategic challenges we face as national and international communities … We offer a unique combination of technical knowledge and field experience, as well as the academic rigor of policy analysts and the advisory skills of consultants. It is this combination that helps our clients to prepare, manage, and successfully respond to an array of evolving security intelligence and advisory needs.” Excerpt from “Global Perspectives” on The Soufan Group website.

3- In the Nawaat article discussed here, the author observed that «While the Ansar Charia movement encourages jihad in Syria and many experts agree that recruiters in Tunisia and Egypt belong to this movement, not one detainee mentioned having been approached by someone directly promoting a religious or political movement.”

The Economist notes in Stranger in a strange land that «Some are motivated to contribute to the creation of a caliphate, or Islamic state; others simply to escape drab lives at home. Yet why some countries are more represented than others is hard to explain. Tunisians are estimated to be the largest contingent, possibly because domestic turmoil has weakened the security forces’ ability to track them. Yet those from Saudi Arabia and Jordan, with intrusive intelligence agencies, are almost as numerous. Those countries have a history of home-grown jihadism, yet ideology or a history of domestic extremism is not a full explanation. Iraqis, who comprise the leadership of the Islamic State, the militant group most foreign fighters join, make up relatively few foot soldiers.»

4- An interesting country-by-country comparison of «The origins of ISIS’s foreign recruits» set within a broader examination of How ISIS Works, published by the International New York Times on 16 September 2014, might for instance be a more thorough and generally more useful resource than the limited- and questionable-in-scope CNN International study. The former, including sections on «Organization,» «Territory,» «Financing,» «Governing,» «Military,» and «Weapons,» methodically details its sources for each topic examined and also provides links to related INYT articles, which in turn link to external websites and documents…the overall effect is that of connecting the reader to a wealth of resources and information, encouraging him/her to read more and explore further.