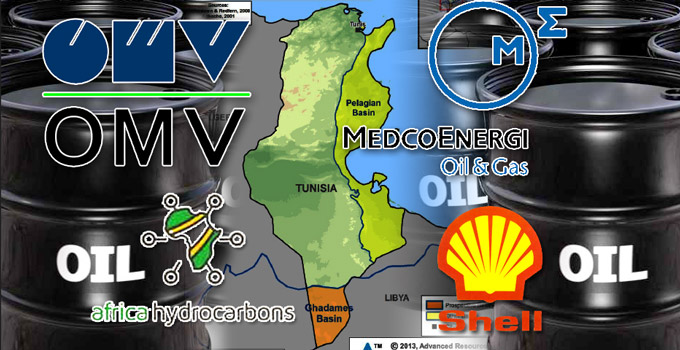 In contrast to what one often hears on capital streets about the dirth of natural resources that little Tunisia has to offer in the way of access to the global market, the cropping-up of press releases and studies in foreign press over the past decade or so intimate the titillation of petro-oil companies at prospects of investing in gas and oil exploration and production in the democratically-inclined ‘bright spot’ of the Arab World. The country’s «start-up democracy team» of technocrats has set the stage for economic liberalization through strategic partnerships and campaigns soliciting foreign investment. What symbolizes this shift more effectively than the development, through international concessions and collaborations, of Tunisia’s hydrocarbon industry?

We have recently met with the Government of Tunisia and they have shown their strong support in welcoming us back to Tunisia to pursue oil and gas opportunites. Lukman Mahfoedz quoted in MedcoEnergi Returns to Tunisia to Expand its E&P Global Operations 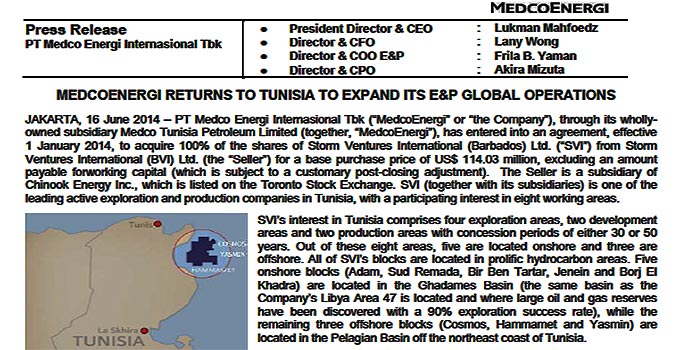 Chinook Energy, for whom the transfer of shares represents a shift to an entirely domestic oil and gas operations, has concessions in a total of eight «prolific hydrocarbon areas» that include four exploration sites, two development sites, and two production areas: Adam, Sud Remada, Bir Ben Tartar, Jenein, and Borj El Khadra in the Ghadames Basin (on-shore), and Cosmos, Hammamet, and Yasmin in the Pelagian Basin (off-shore). As mentioned in the press release, the recent concession—retro-actively effective 1 January 2014 in spite of its pending government approval status—is not the company’s first in Tunisia; MedcoEnergi previously held production rights in the Durra and Mona gas fields and was a partner in the Anaguid concession in April 2011 allotting it 20% of a joint holdership with ETAP (30%) and OMV (50%), although MedcoEnergi subsequently sold all of its Anaguid shares (resulting in the 50-50 OMV-ETAP holdership) to OMV for 58 million dollars in November 2011.

‘Is Tunisia the New Hot Spot for Energy Investors?’

For the first time major spending has been committed to test Tunisian basins which are arguably equally prolific as those in neighbouring environments with more work performed, such as Libya. John Nelson of Africa Hydrocarbons quoted in Is Tunisia the New Hot Spot for Energy Investors?

At the time that Oil Price interviewed the CEO of Tunisia-invested Africa Hydrocarbons about «Is Tunisia the New Hot Spot for Energy Investors?», an EIA-ARI report (described below) noted that «Considerable exploration activity is underway in the Ghadames basin, with much of the activity still devoted to conventional oil and gas resources.» In 2013 Tunisia’s Ghadames and Pelagian Basins were occupied by a handful of moderately-sized (largely Canadian) oil companies, including Perenco (London), Cygam Energy (Calgary), Winstar Resources (Calgary), Chinook Energy (Calgary), and Africa Hydrocarbons (Calgary), in addition to some of the bigger names such as OMV (Vienna) and Shell Oil (The Hague).

We have heard that Shell and others have an interest in testing shale1 (also called “unconventional”2) plays3 within the region. The possibility for an unconventional play type also exists on our acreage but we have chosen what we believe is the “low hanging fruit” [conventional4] to target first. John Nelson of Africa Hydrocarbons quoted in Is Tunisia the New Hot Spot for Energy Investors? 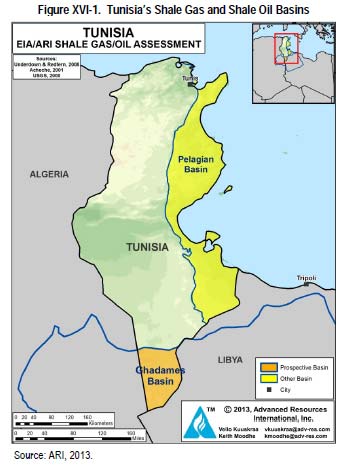 In June 2013, the US Energy Information Administration (EIA) published the World Shale Gas and Shale Oil Resource Assessment assessesing 137 shale formations in 41 countries outside of the United States. The study, prepared by Advanced Resources International (ARI), is long and technical though not incomprehensible with a bit of vocabulary clarification, and gives some indication of how Tunisia falls within a vision (of powerful players in the energy industry) for the future of hydrocarbons.

It is clearly important for those interested in the evolution of global markets for liquid fuels to assess the magnitude and extent of recoverable resources from shale formations.EIA-ARI, pp 13, Technically Recoverable Shale Oil and Shale Gas Resources 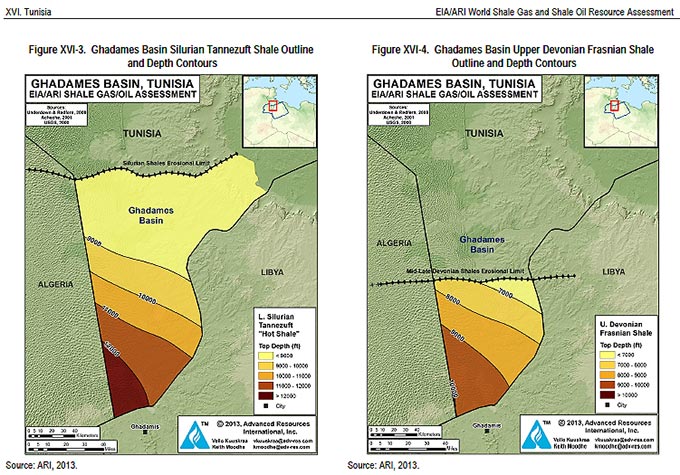 Ten of the report’s 730 pages are dedicated to the aforementioned ‘possibility for unconventional play’ in Tunisia’s Ghadames Basin in the south and, to a lesser extent, the Pelagian Basin covering both on- and off-shore resources in the east. According to the report’s ARI authors, the Ghadames (also called Berkine) Basin spans eastern Algeria, western Libya, and southern Tunisia. Its two shale fomations constitute 114 trillion cubic feet (Tcf) of risked5 [as opposed to unrisked6] shale gas in-place7 of which 23 Tcf is risked, technically recoverable8 shale gas resource, as well as 29 billion barrels of risked shale oil in-place, 1.5 billion barrels of which is classified as risked, technically-recoverable shale oil resource.

The Silurian-age Tannezuft ‘hot shale’9 characteristic of the Ghadames basin is a prevalent rock source for conventional gas fields throughout the MENA region; the Ghadames formation is an organic-rich marine shale whose thermal maturity10 ranges from early/ immature (wet gas11 and condensate12) to late/postmature (dry gas13) north to south respectively. It constitutes 43 Bcf (bioconcentration factor as a measure of resource concentration)/mi2 of wet gas and 3.1 million barrels/mi2 of condensate. The risked ressource in-place is 45 Tcf of shale gas and 0.8 billion barrels of shale oil and risked, technically recoverable resources of 11 Tcf of shale gas and less than 0.1 billion barrels of shale oil.

A Glimpse into the Hydrocarbon Industry

We benefitted greatly from the major new efforts on assessing and pursuing shale gas and shale oil resource, stimulated in part by the 2011 ETA/ARI study in countries such as Algeria, Argentina and Mexico, among many others.EIA-ARI, Technically Recoverable Shale Oil and Shale Gas Resources

If the US EIA has benefitted from research and assessments of international shale gas and oil development prospects, the information presented is equally pertinent to energy-affiliated institutions and the citizenry of any country whose unconventional gas plays potential is a feature of the report, which also offers a glimpse into how the US sets about selecting investments abroad. In Tunisia, in light of repetitious references in international media to the country as a political «bright spot» and «technological hub» of the MENA region, a «hot spot» of the hydrocarbon industry, in light of foreign interest to invest in the interim government’s «start-up democracy,» in light of the press releases and extensive studies published by foreign institutions that discuss concrete and/or potential plans for the reform and development of Tunisia’s economic, political, technological landscapes, Tunisian citizens especially deserve access to the content of such studies and agreements as they do, after all, concern among other things the operation of state institutions and management of natural resources.

1 shale – fine-grained sedimentary rock that can be rich resources of petroleum and natural gas
2 unconventional oil – consists of a wider variety of liquid sources including oil sands, extra heavy oil, gas to liquids and other liquids
3 (gas or oil) play – a group of oil fields or prospects in the same region that are controlled by the same set of geological circumstances
4 conventional oil – a category of that includes crude oil and natural gas liquids and condensate liquids, which are extracted from natural gas production. In general conventional oil is easier and cheaper to produce than unconventional oil.
5 risked reserves – either probable or possible reserves depending upon the amount of uncertainty involved and basically represent poorly developed or undeveloped oil
6 unrisked reserves – those which have already been developed by drilling and production and thus have a very reasonable certainty of being produced
7 gas in place (GIP) – the total volume of natural gas in an underground rock-formation
8 technically recoverable resources (TRR) – represent the volumes of oil and natural gas that could be produced with current technology, regardless of oil and natural gas prices and production costs. pp 10
9 hot shale – shale of particularly high uranium content
10 thermal maturity – a measure of the degree to which organic metamorphism has progressed, and gives a crude indication of the maximum temperature the rock has experienced. Three levels of maturity are recognized by petroleum geochemists, early/immature (methane), peak/mature (oil), and late/postmature (gas) (definition adapted).
11 wet gas – natural gas that contains less methane (typically less than 85% methane) and more ethane and other more complex hydrocarbons.
12 condensate – a low-density mixture of hydrocarbon liquids that are present as gaseous components in the raw natural gas produced from many natural gas fields
13 dry gas – natural gas that occurs in the absence of condensate or liquid hydrocarbons, or gas that has had condensable hydrocarbons removed