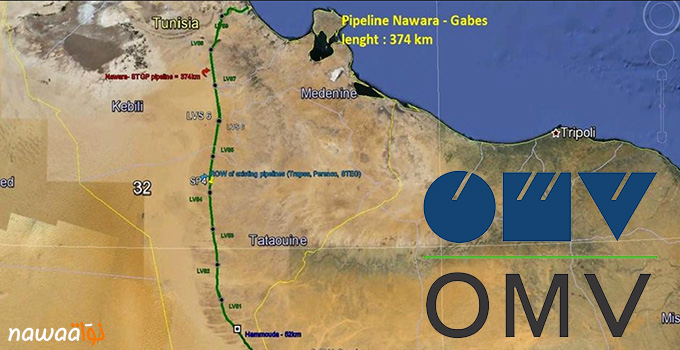 OMV Invests in the Development of Tunisia’s Gas and Oil Sector
Two years away from the first gas production in the Nawara gas field in the south of Tunisia, the petro-oil company OMV (Österreichische Mineralölverwaltung)—Austria’s largest manufacturing enterprise—affirmed its investment, a projected 500 million euros (approximately 680 million dollars) in a two year-long development project. The announcement comes after four years of project development elaborated by the OMV and the Tunisian National Oil Company (ETAP), the early fruits of which have been planning committees hosted by the Tunisian Ministry of Industry, legal evaluations to ensure the project’s compliance with national and international regulations, and several comprehensive studies on the environmental impact of imminent developments in the exploration and production of gas and oil in Tunisia.

OMV
According to the Press Release issued May 30, OMV Executive Board Member Jaap Huijskes reported,

This huge energy project creates a win-win opportunity for all business partners as well as the local communities, and it receives the highest level of support from the Tunisian Government. OMV is fully committed to investing in the development of resources in Tunisia to increase production levels and develop the reserves base. We are proud to be a trusted partner to Tunisia in further unlocking the country’s domestic energy resources.

The statement indicates that the Nawara project is symbolic of the «important role that Tunisia plays in the OMV portfolio» as the OMV’s first international project in 1971 was «in the gulf of Hammamet where oil was first discovered in 1977». OMV sees Tunisia as an avenue of growth and development for the future of natural gas and is accordingly invested in several projects in Ghadamès, Gabès, and Nawara where a concession with ETAP designates the fifty-fifty partnership for the development of resource production in the region.

OMV, whose headquarters are in Vienna, specializes in the production of gas and oil. Its core business is oil refining and marketing. Its operations are principally gas wells in Romania, Austria, and a number of active wells in North Africa, the Middle East, the Black Sea, the Caspian Sea and offshore. European Investment Bank, Etap South Tunisian Gas page

Environmental Impact Studies
OMV’s public statement regarding its investment in the Nawaara gas field comes one month after a National Debate on Energy and the subsequent publication of a Nawaat article characterizing the corruption associated with the energy sector and specifically involving ETAP and the Ministry of Industry, Energy and Mines. The announcement signals the synchronization of the Gazoduc (South Tunisian Pipeline) and Nawara projects and the approval of Tunisian authorities* to proceed with exploration and production activities in the Jenein Sud region. Little is written about OMV in national media, and reports on OMV-ETAP collaborations essentially reproduce the same basic information contained in the press release, although several exhaustive Environmental Impact Studies (EIE) -all of which can be viewed on the BEI ETAP South Tunisian Gas page – commissioned by OMV and published last year project the multidimensional impacts on local populations, the environment, employment, industry, energy, and economy. In light of the implication of ETAP and the Ministry of Industry in the mismanagement of natural resources, the notoriety of oil companies worldwide for politicization and economic corruption, and the immensity of intended exploration and production activities in the south of the country, the Gazoduc-Nawara project demands public attention. The information contained in the EIE’s is vast but accessible, complete with maps, diagrams, and technical elaborations that may be more than the average citizen has time or mindspace for, but which is necessary nonetheless and can be used as a tool for public scrutiny and insistence upon institutional transparency and accountability.

The impacts of the different phases of the project, namely the construction, exploitation, and abandon phases, on the physical environment and human [health] throughout the designated course of action have been noted in this study. These impacts are largely minimized by the elected course of action, but the risks, harms, and negative effects on the environment remain and require careful and effective management. TESCO, Environmental Impact Study on the Gazoduc Construction Project

For all intents and purposes the Environmental Impact Study on the Gazoduc Construction Project – Nawara Concession Development prepared by TESCO can be used as a comprehensive resource as it is generally broader in its scope, including a brief outline of OMV history and interest in Tunisia, and encompasses:

a the development of the Nawara gas field which is the object of anther EIE,
b the construction of a Gazoduc…which will channel the products of the Nawara gas field to the gas treatment station at Gabès,
c the construction of a gas treatment station in the industrial zone of Gabès in order to produce the final products (commercial gas, propane, butane, and substrates) to the STEG [Tunisian Electricity and Gas Company] and the SNDP [National Oil Distribution Company]. This phase will be the object of a separate EIE study. 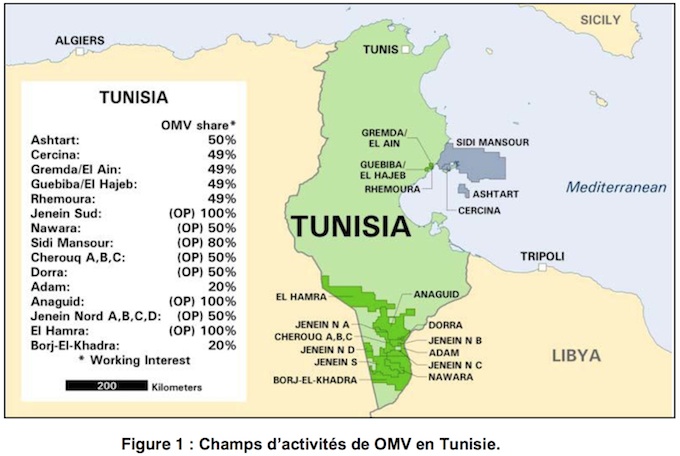 The African Development Bank and a ‘Framework for Resettlement’
Economic, social, and ecological directives designated by the African Development Bank (BAD) (enlisted in 2011 by OMV-ETAP to provide financial support for the South Tunisian Gas Project (STJG)) constitute a significant part of the regulatory framework as, according to the (May 2013) TESCO report, «a strong and diversified economy constitutes a sure means to reinforce the capacity for environmental protection (pp 18).» BAD guidelines emphasize: community participation in decisions relating to resource management as it affects «the most marginalized and vulnerable populations,» transparency and accountability of associated institutions, and a collaborative international approach to ecological initiatives. The Executive Review of the Framework for Population Resettlement is the BAD’s own report, published in April 2013, that «studies the modalities of treatment and indemnity to persons susceptible to being affected by the implementation of the project. The objective of the study consists in elaborating a Framework for Resettlement (CRP) for populations who might be affected by the constrution and exploitation activities of the Gazoduc (South Pipeline)-Nawara project financed by the African Development Bank (BAD).»

European Investment Bank Funding
It is noteworthy that, although the European Investment Bank (BEI) has promised generous financial support for the South Tunisian Gas Project—approximately one-third or 380 million euros of the projected costs (an estimated one billion euros according to the BEI)—its guidelines are not detailed in the EIE texts, certainly because the Bank’s commited to the project at the time that the final EIE study was published (August 2013). It appears to be the only resource that provides all five of the EIE files for readers. It does, of course, have its own general Guide to Procurement containing a Covenant of Integrity to which OMV and ETAP will presumably conform throughout the project’s undertakings.

OMV’s intended exploration and production activities in the Nawara gas field, its interest in developing Tunisia’s gas and oil industry both to diversify the OMV portfolio and to strengthen the profitabililty and energy alternatives in Tunisia is just the sort of foreign investment that the Head of Government has so avidly sought for the country over the past several months. According to public communications, financial support from the African Development Bank and the European Investment Bank, and especially the multitude of Environmental Impact Studies, the Gazoduc-Nawara project jointly planned and carried out by the OMV and ETAP effectively presents itelf as a ’50-50,’ ‘win-win’ collaboration. The Nawara concession and associated activities are nonetheless unfolding in a context of political transition, economic instability, and the questionable governance of the primary political and economic institutions involved, namely ETAP and the Ministry of Industry. A Nawaat investigation from earlier this year is a reminder of this air of underhandedness:

Is the Ministry of Industry acting with all the diligence conducive to mineral resource management in conformity with the expectations of citizens to whom, it must be emphasized, this national wealth belongs? La Redaction, Bouchamaoui and the Minister of Industry: The ‘Banana Republic’ Natural Resource Management of the Tunisian Government

In light of TESCO’s cautionary statement that environmental and human health risks can only be avoided through careful and effective management, questions concerning the integrity of associated state institutions are cause for concern. It is of course important not to overlook the advantages that the project symbolizes—foreign investment, job creation, an expanding energy sector—as it is equally vital to demand continued communications between the main actors involved and the citizenry and to ensure that the aforementioned community participation in decisions concerning natural resource management is in fact honored throughout the project’s implementation.