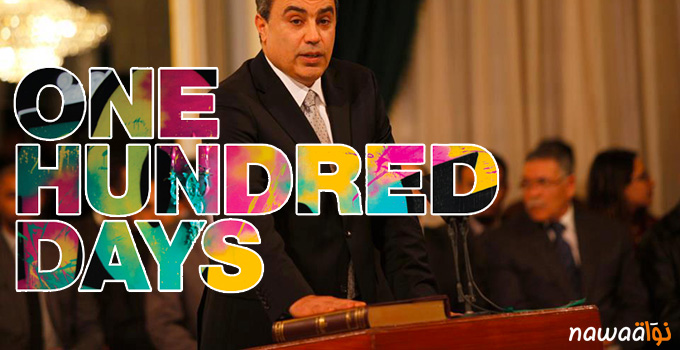 It is tradition, according to La Presse de Tunisie, to carry out a critical assessment of the current administration’s work one hundred days into its tenure. What analysts, journalists, and civil society members are saying now about Jomâa’s work after the designated «grace period» is the would-be measured prognosis required to translate civil society’s interests and opinions into a coherent message prompting the Prime Minister to impose drastic, tangible policy changes conducive to setting the country in the direction of economic recovery. Integral to evaluations is the code of objectives fundamental to defining Jomâa’s role in government, the Roadmap which has been invoked over the past several days as an instrument to measure the Prime Minister’s productivity thus far as well as to formulate recommendations for his remaining time in office.

The Economy According to Hammouda and Ayari

Just under a week before the Prime Minister addresses the public (Wednesday, March 14), a press conference with Minister of Economy and Finance Hakim Ben Hammouda and President of the Central Bank of Tunisia Chedly Ayari covered the current economic situation and the government’s plan of action for the next several months. The minister reported that the country’s 2.8 percent growth rate is projected to reach 3 percent between now—in anticipation of what is predicted to be a profitable tourist season, fruitful grain and olive harvests, and the re-opening of the production and export of phosphate. Hammouda and Ayari also discussed a reserves drain that has resulted in the depreciation of the dinar and a lack of liquid cash for which the Central Bank of Tunisia has injected approximately 5.5 million dinars into banks throughout the country. In order to counter the commercial deficit, the government intends to invigorate export by enhancing support for phosphate, tourism, agribusiness industries; to the end of minimizing imports, the Minister of Commerce and been charged with taking inventory on imported products that can be replaced with local products, and a tax increase may be imposed on certain imported goods. To balance public finances the government plans to dedicate its efforts over the next several months to «a program of stabilization, maintenance, and general support for growth, social inclusion and solidarity, as well as bank and tax reforms (by curbing tax evasion and setting into place an equal taxation policy.»

‘What are we waiting for?’

For some time now, officials have merely repeated the situation is very difficult, the situation is critical. Unfortunately I have not seen any radical, head-on decisions to remedy this; it is unbelievable to see such paralysis in this ‘critical situation’! What are we waiting for? Perhaps the situation has become so severe that it has overcome officials … in our present critical situation we ask ourselves What purpose do they serve? with their continual talking, sulking, whining, meetings, … only to wait until the ship sinks once and for all? only to tell us afterwards, You see, I told you the situation was critical. In this case, thank you very much. Reader response to Hakim Ben Hammouda and Chedly Ayari Take Stock of Tunisia’s Economic Priorities

If its delivery is distinctive, the overwhelming message from public figures and ordinary citizens is the same: the gravity of the economic crisis—whether the exacerbated image of a political media campaign or an accurate portrayal of the country’s disequilibrium— is such that the Prime Minister has been called upon to transcend the drawn-out bickering of a politicized National Economic Dialogue, to take actions in measure with the severity of the situation that he has expounded in his discourse and communication with Tunisians and the international community, to devise an economic roadmap that sets out long-term, sweeping structural reforms.

Above all, Faith in the State and Its Institutions
One ever-present and significant detail in Tunisia’s public and political conscience concerns the previous (lack of) experience of those holding posts in the interim government–«the majority of its members have not previously occupied official posts and have lived and worked for a long time in countries (Europe, America, etc.) where political practices and management of State affairs are different than those to which Tunisians are accustomed.» Uncertainty and a lack of faith in the quality of interim government officials–of which National Constitent Assembly members are undoubtedly the most notorious representatives—helps to explain why there is constant deviation from government decisions (in terms of the elaboration of codes of law and election planning), economic recovery (such as Jomâa’s visits abroad to seek international investors), and general floundering around and infringement upon the division of powers that defines a democratic State (as epitomized in the Martyrs of the Revolution Affair). Nidaa Tounes representative Lazhar Akremi is of the perspective that one must respect the presiding authority of State institutions as well as the officials who are charged with carrying out the work: «We must not forget that Jomâa’s government is the government born of the consensus through the National Dialogue. In light of this fact, we are obligated to support it even while we recognize that it is still struggling to take off and to take the necessary measures that will enable it to fulfill the responsibilities it has taken on.»

Waiting for Reforms to Materialize
In the same breath, Akremi voiced what embodies the prevailing sense that tangible reforms have yet to materialize under Jomâa’s government. «Unfortunately, we have observed that the implementation of these objectives is slow to manifest.» By far the most resounding expressions of impatience and frustration are provoked by the perceived inefficiency and unproductivity of the current administration. Spokesman for the Jamhouri party Isaam Chebbi cites two examples that characterize the Prime Minister’s stilted progress in the political transition delineated by the Roadmap:

On the national level, his steps are still very slow and it is sometimes hard to understand why these hesitations. Two cases require the treatment of a clear and firm political approach, namely the marked neutrality of the administration with respect to the exclusion of mosques from from political conflicts as well as the dissolution of the Leagues for the Protection of the Revolution. Isaam Chebbi quoted in Waiting for Concrete [Change]

Proceeding with the National Economic Dialogue
Secretary General of the Patriotic and Democratic Work party Abderazzak Hammami ‘s remarks echo the same priorities, calling for the PM to prioritize «the firm application of the neutrality of the administration and the dissolution of the Leagues for the Protection of the Revolution» as well as and above all «just and equitable taxation and the definitive resolution of the parallel commerce* issue by integrating those who make up 40 percent of the nation’s economic make-up.» Days away from continuing the National Economic Dialogue and with economic insecurity the heaviest burden facing Tunisians, the most prominent messages to the Jomâa government are directed towards economic recovery. In an interview with La Presse, Radhi Meddeb cautions the government not to waste time organizing and participating in drawn-out discussions on economic reform, that the solutions required by efficient and sustainable economic recovery will neither be found in popular committees nor in short-term initiatives, that the government enter into the next round of discussions in the National Economic Dialogue with a roadmap, a «precise program» including specific, number-based diagnostics, «a clear vision that delineates multiple, coherent, bold structural reforms» that exists outside of the realm of political party bickering and the time constrictions imposed by the impending elections.

This government is supposedly not concerned with in the continuation of events after the next elections. It should assume its legitimacy and strength to the fullest to implement all of the reforms that the country needs. Its only viable approach is to seek support from its objective allies: the impoverished middle class, the unemployed, interior regions, the administration, banks and businesses… The country has been drained by a transition that drags on. Nothing will be done—not investments, internal or external, nor true reform without institutional visibility and strengthened policy. Interview with Radhi Meddeb, It is Up to the Government to Govern

Decentralized Political Power – ANC, Political Parties, Unions, and Jomâa
Both Meddeb and Economist Moez Joudi speak to the limited power the Prime Minister actually has in the context of the plurality of political entities that have an impact in decision-making processes, «notably,» cites Joudi, «the ANC that blocks laws such as the investment code or the law on public-private partnership.» While Meddeb calls for solidarity among all of Tunisia’s «objective allies,» Joudi implies the need for unanimity on the part of political actors.

In addition to this major handicap that the Assembly has come to represent, political parties, the Utica which continues to gain power, trade unions and unions representing different professions, all share a scattered, de-centralized power that signficantly reduces the Prime Minister’s flexibility. Now, when the country is near economic collapse, patriotic fervor is imperative in order to channel all of these efforts. Moez Joudi, Reforms: Act and Adopt the Right Tempo

Joudi urges Jomâa to distinguish his economic approach from that of the previous interim administrations, whose economic policies were carried out in the interest of electoral campaigns, and to take drastic measures to reform the flat-rate tax system has been in place since before the Ben Ali regime was in power: «Today, with a government of technocrats, it is not normal that Mehdi Jomâa and his team take the same position [as previous administrations]. This government is not politicized, doesn’t have an electoral deadline ahead, and so it is vital not to delay in reforming the flat-rate tax policy.» According to Meddeb, the current economic state and numbers portend state collapse and must be treated with an appropriately drastic and immediate recovery plan.

* Parallel commerce in this context refers to the smuggling of contraband