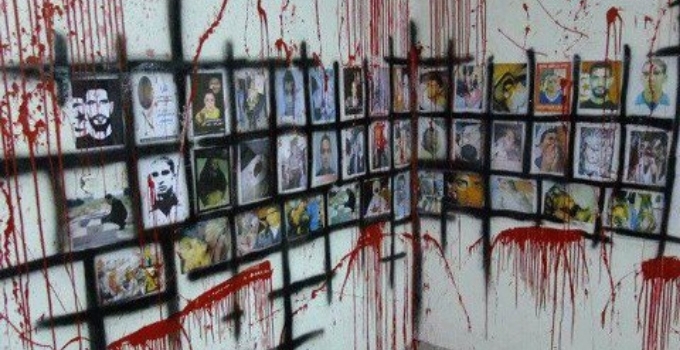 Is the ‘Martyrs of the Revolution Affair’ that has inundated Tunisian media over the past week symbolic of an already-failing post-revolutionary justice system? Or does it instead reflect the reappearance of the same sort of political corruption that thrived under old regime? Either way, the gaping division between a recent decision announced by Tunisia’s military tribunal and public opinion has Tunisians up in arms or at least on edge about the political, legal, and moral integrity of the State.

An ‘Extremely Politicized’ Verdict
On April 12 the military tribunal announced its decision to reduce the sentences of former Ministry of the Interior officials under Ben Ali. The persons implicated are presumed to have had a hand in the death of over three hundred «martyrs of the revolution» and the wounding of thousands of others from Thala and Kessrine, Greater Tunis, and Sfax between December 10, 2010 and January 14, 2011. The verdict (concerning former Chief of Security Ali Seriati, former General Director of Public Security Lofti Zouaoui, former General Director of National Security Adil Touiri, former General Director of Public Order Brigades (BOP) Jalel Boudriga, former General Director of Special Unit Forces Rachid Abid, and former Minister of the Interior Rafik Hej Kacem who is to be released in May upon completion of his three years in prison), a reduction of the original sentences of “the principle symbols of the repressive Ben Ali regime,” spurred outrage amongst the families of the martyrs. “While some expected capital punishment or life imprisonment, magistrates lightened the sentences, nearly annulling them altogether” reported Business News.

Unabashed outrage has by no means been limited to families of victims of the revolution and their sympathizers. Civil society members, government officials, and international authorites have been quick to react to the verdict and qualify it as unjust, including the International Federation for Human Rights (FIDH), whose president, Karim Lahidji, stated,

Highly symbolic, these first proceedings should have set an example. Instead, not only were they entrusted to the military court in violation of international standards, but also the verdict seems to indicate that the military court has not been immune to the extreme politicization of the case.
Karim Lahidji, Quoted in Tunisia-The FIDH Denounces a ‘Politicized’ Verdict

A Belated and Poorly-Substantiated Investigation
A discussion on MosaiqueFM featuring lawyer Charfeddine Kellil on behalf of the families of the martyrs and Mounir Ben Salah for the military court was indicative of the controversy pertaining to legal procedures for Saturday’s verdict. Kellil called attention to inconsistencies in the investigation (for example, the request for an interrogation with former Army General Rachid Ammar and the subsequent unexplained retraction of the request) and claimed that the military justice’s decision had been politically influenced, as evidenced by a letter issued to Rachid Ghannouchi on behalf of several implicated former officials. In defense of the military tribunal, Ben Salah also maintained that the quality of investigation procedures were poor due to lack of evidence—victims had already been buried at the time that autopsies were performed—but given that the only substantial proof was contained in documents, the military court had appropriately, impartially judged the case and based the final decision solely upon the documents in question.

The military court is expected to issue a written statement substantiating its decision and clarifying some grey areas that have led to several important questions. Why, some lawyers have asked, was the original charge of ‘premeditated murder’ changed to ‘non-assistance to persons in danger’ and ‘involuntary homicide’? And, more broadly, why, after the severe justice- and civil rights-vacuum within the Ben Ali government, were mechanisms of transitional justice not among the first endeavors taken up by the interim government (a particularly pertinent question for ANC deputies, eighteen of whom immediately ‘froze’ their parliamentary duties upon hearing the verdict until the adoption of a Truth and Dignity Court which was initially proposed almost two years ago)?

According to Business News, whereas the vehement and overt opposition of the families of martyrs is understandable in light of a personal sense of injustice, public declarations and protest from politicians and representatives of other, non-judiciary, branches of government—namely various political parties, the ANC, and President Marzouki—are a breach of democratic integrity. The article points out that all theories and accusations of corrupt investigation procedures are unfounded responses since, «In fact, those who analysed the situation were not speaking with knowledge about the case because they expressed themselves without having seen and read the details of the statement of the verdict and its justifications.»

Politics Keep Bleeding into all Aspects of Society
In keeping with the patterns of political parties over the past several weeks, one is inclined to assume that party leaders who have expressed dismay regarding the verdict and declared their solidarity with the families of the martyrs have found yet another avenue to advance their electoral pursuits. For many, the immediacy and preponderance of political party statements was a blaring lack of délicatesse characteristic of politicians who had neither respect for the families who were shocked by the verdict nor State institution procedures, not to mention disregard of the however small or large possibility of the innocence of the implicated individuals.

If Tunisians were not surprised by the intervention of politicial parties into matters of the Judiciary branch of government, representatives of State instutions had maintained at least a slightly more noble appearance…

(There is No) ‘Separation’ of Powers

…members of the ANC and the President of the Republic represent two powers bound by their responsibility to uphold the independence of the judiciary, a sacrosanct principle of any democratic state that respects the law and [State] institutions.Sarra Hlaoui, Martyrs of the Revolution Case: The First Real Test for Politicians

That politics have seeped into national holidays, riding on the glory of fallen heros and claiming some association with legendary figures of Tunisian history is amusing; that politicians have muddled any sense of a uniform, data-based analysis and prognosis of the country’s economic status is predictable; that current officials and government representatives have marched into the arena of State justice imposing their own imprecise and unfounded judgements on the legal procedures is an alarming overstepping of boundaries and threat to the integrity of the most basic foundations and structures of a co-operative, unified system of government.

Just when the country has in its grasp a proper Constitution that reflects unanimity at home as well as abroad…just when the country has begun to set into place its institutions, the indespensable ingredients for a State founded upon reliable and viable laws, Tunisia seams to have failed in its first real test—that of observing a strict separation between the three powers…Sarra Hlaoui, Martyrs of the Revolution Case: The First Real Test for Politicians

The ANC and Draft Law n°44
From one article to the next, the National Constituent Assembly (ANC) seems to have solidified and epitomized a perceived proclivity for nonsense and hypocrisy. Upon the military court’s judicial announcement last Saturday, eighteen ANC members immediately ‘froze’ their membership and signed a petition to form a special Truth and Dignity Court dedicated to the cases of the martyrs of the revolution which a Business News article ironically points out is, «A tribunal blocked, until now, within the same ANC where for one year the Law of Transitional Justice has also remained blocked.» As ANC deputies have (re)focused their gaze upon Draft Law n°44 initially proposed in August 2012, legal experts (and even average citizens who are familiar with the content of new Constitution) have pointed out that the adoption of the said draft law is in direct violation of Article 110 of the Constitution.

Classifications of courts shall be established by virtue of a law. No exceptional courts or exceptional procedures that may prejudice the principles of a fair trial may be established or adopted.
Military courts specialise in the domain of military crimes. The law shall regulate their jurisdiction, composition, applicable procedures and the statute of its judges. Jasmine Foundation, Unofficial Translation of the Constitution of the Tunisian Republic

More Marzoukiism
On Thursday, April 17, Moncef Marzouki appeared in a public display of solidarity with the families of the martyrs who requested that the President not accept the military court’s decision and that a special tribunal be created for the cases of martyrs and victims of the revolution. In what has been largely regarded as yet another comical manifestion of Marzoukiism (constitutionally-speaking, the President of the Republic has no jurisdiction in matters of the Judiciary branch of government) the Head of State iterated to families and lawyers on January 17 and reiterated in a speech on January 18 his support for the pursuit of justice through the adoption of Draft Law n°44.

By way of contrast Head of Government Mehdi Jomâa expressed his sympathies for the families but spoke to upholding the integrity of institutions and the division of powers.

This gives an idea, according to observers, of the difference between an independent government composed of technocrats who have a sense of respect for the State, and a presidence of the Republic and an ANC who behave according to partisan interests and premature election campaigns. Sarra Hlaoui, Martyrs of the Revolution Case: The First Real Test for Politicians

What these contrasting statements from lawyers, politicians, and current government representatives do not inspire is faith in the efficiency, transparency, cohesion—or even existence of—three independent and equal State powers.