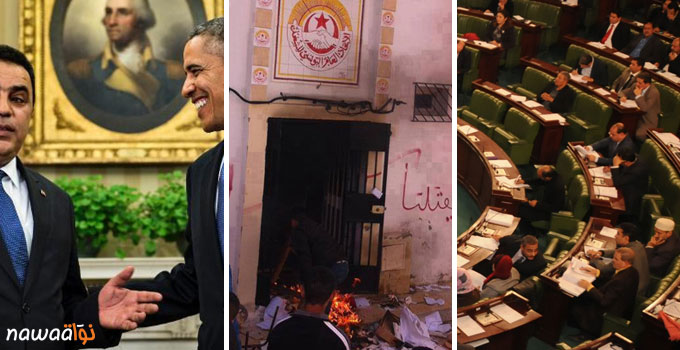 With Article 15 on the table for debate, peaking intensity of conflicts in Medenine over the closure of Ras Jedid, Jomâa’s glowing reflections about his visit to Washington, and widespread public cynicism about the volatility and apparent inefficiency of politics and politicians, media coverage in Tunisia over the past week captures the give-and-take, all-but-constant process that is ‘democratic transition’.

Article 15 and the Polemics of Deciding the New Electoral Code

On April 7 and 8, deputies of the National Constituent Assembly (ANC) will vote on the highly polarized Article 15. Parliament members will discuss what is now essentially a rough draft (composed of 170 articles, many points of contention, and some 500 proposed amendments) and will eventually be the country’s first official electoral code since the revolution. The crux of Monday and Tuesday’s debates is a vote on Article 15, whose weighty symbolism is captured in a Nawaat article:

Having become a synonym of an indirect referendum vote concerning the very revolution itself, the famous and consequential Article 15 eclipses the rest of the contents of the new electoral law.Seif Soudani, Hamadi Jebali: ‘A Presidential Candidate Who Wishes You Well’

A rather pessimistic La Presse de Tunisie article, about the inefficient electoral-code building process indicates that «the hope of seeing the presidential and legislative elections being organized in so short a period diminishes each day. The instrument of work, the electoral code, is not ready, and what is worse, it is the source of continual controversy.» The author points out that spokeswoman Hanène Sassi of the Commission of General Legislation predicts that an article-by-article vote will be, at best, a two- to four-week undertaking.

Border Tensions at the Forefront of National Security Concerns
Featured on MosaiqueFm last week, Minister of National Security Ridha Sfar emphasized the growing dangers and concerns associated with terrorism in the country’s border regions. Tunivisions reported that «extreme vigilance» at the Tunisia-Algeria border is in order and that Sfar has called for Ansar Al Sharia to declare its affiliation with Al Qaeda in the Islamic Maghreb (AQMI) which he maintains poses a threat to the security of the enire region.

To the south-east where tensions are high at the Tunisia-Libya border, the long-standing and vital cross-border commerce and intermittent protests, demonstrations, and violence are fuel for public debate on issues invoking socio-economic disparities and prejudice. According to Sfar, «In opting for contraband, the inhabitants of these regions give terrorist groups the power to take control of the area, enabling them to circulate weapons and threaten national security.»

The city Ben Guerdane, some thirty kilometers from the principal point of contraband trafficking at the border, has experienced heightened unrest since the closure of the Ras Jedir crossing point on March 16. Demonstrations took place and a city-wide general strike was initiated following the burning of the city’s regional UGTT (Tunisian General Labor Union) office by protesters on April 2. A video posted online documents a protest during which the orator launched provocative insults at the government, calling for Prime Minister Jomâa to step down «in the same tone that is characteristic of jihadists in the Middle East» describes a Business News report that features the video clip. The next day, spokesman for the Libyan Ministry of the Interior Rami Kaâl announced that, contrary to reports that have circulated in the media, there are no imminent plans for the re-opening of the Ras Jedir border and that negotiations between the Tunisian and Libyan ministries of the interior will be underway to devise a «radical solution» to border issues.

The same day, Governor of Medenine Habib Chaouat confirmed Kaâl’s statement. Chaouat’s comments on Shems Fm evoked the complexity of the situation as he reported that certain organized contraband groups are opposed to the re-opening of the border and are deliberately cultivating a chaotic environment in order to push forward their own agenda and promote their own economic interests.

Jomâa Visits Washington
Amidst the flurry of international economic pilgrimages and dealings, Prime Minister Mehdi Jomâa’s much anticipated and highly mediatized visit to Washington has come and gone. The economic objectives for his meetings with American businesspeople, investors, and politicians were clear and consistent throughout the four-day trip, which culminated Friday in a discussion with President Barack Obama.

During a forum held at the US Chamber of Commerce, «A New Era of Economic Cooperation Between the US and Tunisia,» Jomâa, accompanied by the Minister of Economy and Finance Hakim Ben Hammouda, the Minister of Foreign Affairs Mongi Hamdi, and the Minister of Higher Education, Scientific Research and Technologies Taoufik Jelassi, encouraged investment in Tunisia and addressed plans for Tunisia’s economic development through reforms focused on flexibility of the fiscal administration, promotion of enterpreneurship, and restructuring the banking sector.

A sum of five hundred million dollars was the answer to everyone’s questions in anticipation of Jomâa’s meeting with Obama which was the first official session of the Strategic Dialogue between the two countries. Approximately two weeks after touching down in five Gulf countries where he was received with varying gradations of lukewarm greetings and half-hearted declarations of solidarity, the Prime Minister was purportedly appreciative of a warm reception in Washington and a tangible commitment of US support in the form of a guarantee for up to five hundred million dollars in low-interest rate loans. In a press conference at the Tunis Carthage airport upon his return to Tunis, Jomâa announced that not only were the objectives of the visit met, but the results exceeded expectations. The next session of the Strategic Dialogue is set to take place in Tunis in 2015.

Several sources (La Presse de Tunisie, Babnet, and Tunisie Numerique) have reported that Tunisian Prime Minister’s call for support and the American President’s response portray the promised assistance as a boost that will enable a successful democratic transition, rendering Tunisia the starlet of the so called Arab Spring.

The goal is to make Tunisia a success-story and a model for other countries. The challenge is above all to allow for Tunisia’s successful transition process. Saïd Ben Kraiem, In Solidarity for Saving Tunisia

Democracy Means Transcending Temperamental Politicians and Mercurial Politics
Two articles published on the same day in markedly different tones criticized the degredation of social values in political arenas and in the hands of contemporary politicians in general. Mediocrity is Becoming Commonplace disparages the poor quality and ineffectiveness of political debates, the National Constituent Assembly (ANC) and deliberation of the electoral process, and national security, concluding,

We may disagree with a party and dislike a person, but we must still operate with respect. This [base] behavior that we find in a number of politicians denotes rampant mediocrity. The degredation of values does not lead to democracy but in fact threatens the very foundations of the State. Will we continue to leave these mediocre individuals free reign to make mediocrity commonplace? Abdelhamid Gmati, Mediocrity is Becoming Commonplace

A similar message in an article bearing a strikingly dissimilar title, Moral Obligation of Gratitude and a Constructive Spirit, paints a picture of calculating, opportunistic politicians who have inspired an accordingly mistrustful and undiscerningly skeptical public,

It would seem that there is a strategic questioning of this ‘value system,’ qualified as retrograde, in the name of new values in which is hidden the furtive contradiction of one essential value: respect. Mansour Mhenni, Moral Obligation of Gratitude and a Constructive Spirit

Both articles call attention to the ignoble and ill-mannered world of politics and politicians while imploring citizens not to be prone to the «disgraceful spectacles of insults (Gmati), accusations, threats, hair-pulling, each person denigrating the other» but instead to sustain a «constructive spirit beyond the politician’s politics (Mhenni),» to think critically, to keep common decency and values intact in order to fulfill the requisites of a healthy, democratic society.