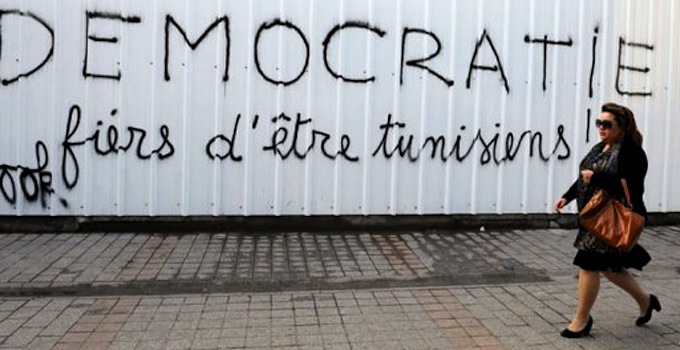 After relatively short post-revolutionary transition period, Tunisian democracy is slowly standing up on its own feet. The 30 years of statesmanship from Habib Bourguiba, which brought Tunisia independence from French colonial rule in 1956, has left the legacy of authoritarianism deeply rooted in Tunisian society. His successor, Zine El Abidine Ben Ali, who served as Prime Minister in Bourguiba’s government, brought another 24 years of political and social repression with little hope for change… But after many generations of political opportunism and self-interest, Tunisian people, tired of struggling with high unemployment, inflation, corruption and lack of political and social rights, decided to take things in their own hands during the Jasmine Revolution of 2011.

Now, three years after the uprising, Tunisian democracy is showing first signs of maturity, openness and equality, which can be observed in multiple elements on the political spectrum: coalition government (progressive and secular, despite having Islamist nationalistic majority) government voluntarily stepping down to give place to technocratic care-taker cabinet leading the way to the next elections; adoption of the new and progressive constitution guaranteeing political and individual rights and ensuring equality and path to democracy; new electoral system which is likely to have a statutory requirement for female representation on the lists; consolidation of political parties and stabilization of the political system as a whole. Nonetheless, many challenges remain in place and plenty more are yet to be discovered by the Tunisian governments.

The Islamist Ennahda Movement won the first democratic elections in Tunisia in 2011 by gaining 37% of votes and 89 sets in the Constituent Assembly (Tunisian Parliament). This came as no surprise given that Tunisian society used to be ruled by the Islamic technocrats for over 50 years, and most of the populous see Islam as an intrinsic part of their lives. Part of their success was also due to the post-revolutionary dynamics I like to call a ‘mushrooming’ of political parties, where dozens of groups and NGOs formalize themselves in the form of political parties, often missing feasible structures, strategy and coherent campaigning platform, not to mention policy base. In the same way as Muslim Brotherhood did in Egypt, Ennahda in Tunisia capitalized on that process and responded in the organised and structured manner – gaining majority of votes during the first democratic elections and forming a government with two other secular parties – the creation of such government itself can be seen as a sign of political maturity. Since then, however, the Government has been under constant criticism for legislative inaction, lack of political and social reforms, increasing corruption, lack of economic recovery and constant security issues. What is, however, most surprising is that the current government coalition has, in light of criticism, voluntarily decided to step down and let the interim, technocratic, government to lead the country for the next 10 months until the next elections.

After months of deadlock and almost two years since the drafting has begun, the Tunisian parliament has made significant progress on their path towards an accountable parliamentary democracy – the new constitution has been passed by the Assembly with an overwhelming majority in late January 2014. This development is a welcomed sign among the Tunisian people and the one that is likely to show stability after months of internal quarrelling. Moncef Marzouki, the president of the Republic commented that “with the birth of this text, we confirm our victory over dictatorship”. With equal rights for men and women, legislative provisions concerning corruption, freedom of conscience (freedom of religion), and even environmental protection, it certainly has been one of the most progressive constitutions drafted in that part of the world. Nonetheless, for the liberal, progressive and secular-minded members of the Constitutional Committee, it has certainly been an uphill battle to secure the rights now praised by the Ennahda movement. Many concerns have also been raised about the ‘loose language’ of certain articles that leave the constitution open to interpretation (i.e. Article 6 dealing with religious freedoms) and, in turn, leaving open doors to further abuse of human rights. However, given all the uncertainties about the constitution, it is a definite step forward and the one that will bring the Tunisian society a sight of relief.

Back in the legislative branch, Electoral Committee is due to finish work on the new electoral law by May, at which point they will propose a schedule for elections and the president Marzouki will declare the date. According to most political parties, however, there is a likelihood that the elections will be postponed until early next year, even though the newly approved constitution clearly states that that presidential, and parliamentary elections have to take place in 2014. Until then, many issues have to be resolved by the committee, including the controversial ‘exclusion law’ preventing members of the former regime to stand as parliamentary candidates – the issue of harsh divide between the current coalition partners, as well as the quota system for female representatives. It remains, however, a framework that will guarantee free, fair and representative elections across the country.

Despite the success hailed by the coalition government, plenty of work still has to be done. Constitution is only a step in the long walk to full democratic transition and institutional development is a bump on the road that is very often neglected by politicians. Institutional framework has to be revisited, developed and strengthened to meet the demand of the constitutional provisions and ease the transition of the market. To name just few examples – higher education sector has to be widened and education resources more evenly distributed across the country, particularly to the less affluent districts inside the country. Such distribution is likely to have positive impact on skills deficiency, but linked with this are entrepreneurial obstacles, where government holds reigns on crucial control of the markets. Cutting the red tape and more open approach with institutional support to SMEs is likely to grow local business and revitalize the economy – an issue on top of the manifesto of every political party.

Security remains an issue of great concern. After two political assassinations last year, public is rightly worried about the right-wing, extremist elements of the political class. There has been increased availability of small arms since 2011 and security services noted increased terrorist-linked activities on the borders of Tunisia, especially Libyan security zones. Despite that, President Marzouki has, in March this year, lifted the state of emergency which came into force after Ben Ali was ousted in January 2011 – surely a sign of confidence in his security apparatus. Indeed, despite the barbwire still in place in certain parts of the capital, one does not feel unsecure wondering around the city – or slightly less so than last year or the year before.

Tunisian political class is still developing with many parties still unsure where do they belong on the ideological lines. During this tense period before the elections everything might change and a lot will depend on political alliances created over the summer. Most political parties are still missing their policy base and the main campaigning mechanism seems to be the opposition to either the Ennahda, or the former regime. All smaller parties, regardless of ideological commitment, try to persuade voters they are the ‘third option’ – the ‘sensible middle ground of politics’. Without proper policies and ideas for governance, however, they risk becoming sidelined and ignored by the electorate. Yes, many issues remain unsolved and yes, things could have moved a lot smoother over the past two years, but putting things into perspective – the ‘mother of the revolutions’, with its consensus-based politics and bold legislative actions, is far ahead its competitors in the race for the democratic holy grail.