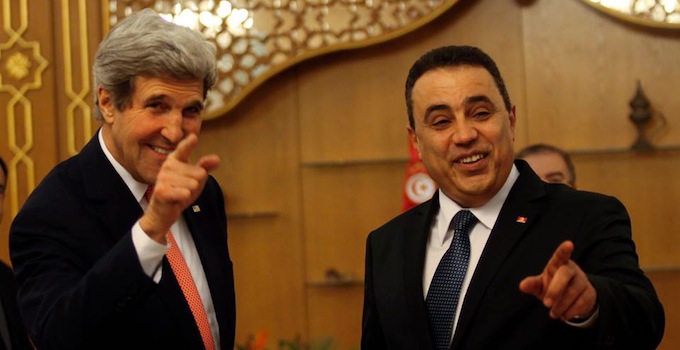 Obama administration officials have recently declared support for Tunisia’s democratic transition to be a ‘top priority,’ and President Obama and Secretary Kerry are likely to repeat this during Prime Minister Jomaa’s visit to Washington next week. But it is essential that Tunisians see more than just rhetorical support from Washington.Letter to Secretary of State John Kerry

Prime Minister Jomâa and President Obama in a Strategic Dialogue
In anticipation of Jomâa’s upcoming visit to the White House next month, the Project on Middle East Democracy (POMED) on behalf of sixty-five signees has issued a letter (see the embedded document below the article) to Secretary of State John Kerry advocating several areas in which the United States can more effectively and extensively support Tunisia through its democratic transition. On Friday, April 4, Prime Minister Mehdi Jomâa will meet with President Barack Obama to inaugurate a Strategic Dialogue which will determine a course of action for US economic aid and investment in Tunisia through the interim period and presidential and legislative elections. On March 19 the US Embassy Tunis posted a Statement by the Press Secretary on the Visit of Prime Minister Jomâa of Tunisia indicating that «the leaders will discuss a broad range of bilateral and regional issues of mutual interest, including U.S. economic, political, and security assistance to support the Prime Minister’s reform agenda and Tunisia’s stability.» Next Friday’s meeting is the intended destination of the letter, a succinct message (whose list of signatures fills more pages than the actual content) of which the Secretary of State, having recently paid a visit to Jomâa at the Kasbah, will be the messenger.

As indicated on the POMED website, the document represents the «consensus» of sixty-five highly qualified and high-positioned Americans (and two Tunisians), while the precise individuals who formulated the seven recommendations and authored the letter are unspecified. It would appear that POMED, who released the letter with an accompanying article entitled «65 Former Officials, Experts Call on Kerry to Bolster Support for Tunisia,» played a significant part in producing the document, and at the very least it serves as an effective outlet for it.

Through dialogue, research and advocacy, we work to strengthen the constituency for U.S. policies that peacefully support reform in the Middle East.
POMED

POMED, a not-for-profit non-governmental organization out of Washington, D.C., is composed of a sizable team of individuals with diverse academic and work backgrounds in North Africa, the Middle East, and the United States. Its focus and principles are precise and nuanced in a way that the missions of large aid institutions, particularly the IMF and the World Bank—are generally not, acknowledging what is often not said about US interests abroad, pointing out the platform upon which the US has based its proposals for assistance to Tunisia since the revolution.

For the second-half of the 20th century, short-term economic and security concerns have often crowded out America’s long-term interest in political reform in the Middle East, leading the U.S. to strengthen friendly dictatorships rather than support democratization. In practice, American economic aid, military assistance, and diplomatic support often helped these authoritarian governments repress demands for political participation from their own citizens.POMED History

The Letter
Naturally the prevailing theme around which the letter’s recommendations revolve is economy, and all seven points touch back to economy as it is the true and ultimate fuel for US interests abroad. Even, for example, the all too appropriate call to «Reevaluate security restrictions on U.S. government personnel in place for Tunisia and the language of the State Department’s travel warning», which brings attention to the security warnings posted on the Embassy website that have provoked negative sentiments and comments by Tunisians and, to a much lesser extent, Americans in Tunisia, although public response is clearly not what inspired this recommendation.

As the U.S.-Tunisia partnership deepens, it is important to remain vigilant, but restrictions disproportionate to the realities on the ground inevitably undermine confidence in the country, damaging the prospects for economic recovery.Letter to Secretary of State John Kerry

Another point proposes that the US «Supplement exchanges for students, academics, and civil society and private sector leaders to strengthen understanding, ties, and partnerships» and explains that «these low-cost exchanges are crucial for improving America’s image and building capacity of Tunisian civil society, and support for them should be supplemented.» The letter is, after all, endorsed by and intended for US government officials and is written accordingly, in polished diplomatic terms where the return of every initiative is measured in dollars and proposed projects and investments perpetuate the image of the US as a benevolent (soft) power.

US Economic Aid and Assistance 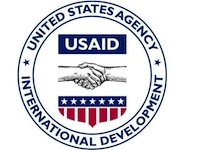 The third point addressed for strengthening US support to Tunisia advises the Obama administration to «establish a permanent USAID mission in Tunis. The administration should quickly finalize the decision to return a permanent USAID mission to Tunisia, which would facilitate the provision of future assistance in each cooperative sector.» In What is Wrong with US Aid to Tunisia, geopolitical analyst Allison Good captures some of the concerns associated with USAID’s projects in Tunisia. Even if what Good, who has critically examined and analyzed both US and EU economic assistance to Tunisia, writes is true, that «there is no doubt that the United States has an interest in helping Tunisia reach its potential,» US economic aid and support historically and consistently reflects the protection and promotion of its own security and profits which USAID itself makes clear in its mission statement:

We partner to end extreme poverty and to promote resilient, democratic societies while advancing our security and prosperity.

Good argues that past USAID projects in Tunisia have been based on directives that do not correlate with the present social and political environment and unrealistic expectations of political and economic reforms after the revolution which «have resulted only in misguided and ultimately wasted American efforts.» 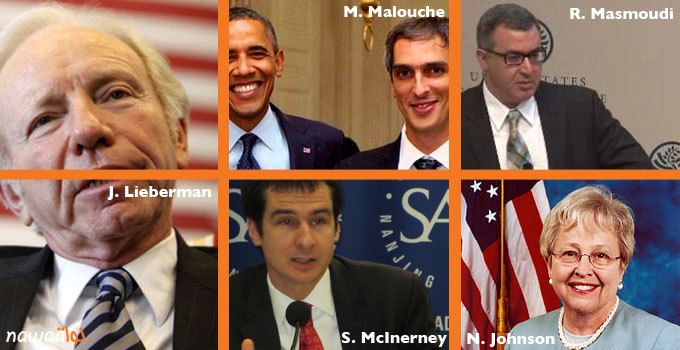 There is no question that among the authors and signees of the letter are qualified experts, researchers, academics, and analysts with impressive CV’s and backgrounds in government positions, national and international institutions, and NGO’s. To name just a few off the top of the list…Stephen McInerney, the first signature represented beneath the text, is Executive Director of POMED and has written for The Washington Post, Foriegn Affairs, and been featured in interviews with Al Jazeera. The second top-most name is that of Tamara Wittes, Director of the Saban Center for Middle East Policy at the Brookings Institution and author of Freedom’s Unsteady March: America’s Role in Building Arab Democracy:

Tamara Cofman Wittes argues that democracy promotion in the Arab world remains an essential component of any strategy to achieve long-term American goals in that critical region…Freedom’s Unsteady March shows why America cannot afford to be neutral or passive in the face of the momentous changes taking place in Arab states and why it must wield its power and influence in support of democratic reform.

It is noteworthy that but two of the sixty-five signees—Mohamed Malouche, a founder and the Chairman of the Board of Tunisian American Youth Professionals in Washington, DC, and Radwan Masmoudi of the Center for the Study of Islam and Democracy in Tunis—are Tunisians. Certainly if the intentions of the letter are genuine and case-specific it would do well to include the analysis and advice from Tunisian experts, analysts, and government representatives.

One day after the letter was published on the POMED website, Al Huffington Post Maghreb posted an article and link to the document:

In some cases, little concerned in their professional careers with Tunisian current events, it is not for an excess of philanthropic intentions that all of these fine individuals deigned to sign [the letter]. Its authors do not hide their motives: the promotion of democracy and the strategic interests of the United States. The country of «the first peaceful transfer of power in an Arab democracy» stimulates covetousness.
Sandro Lutyens, HuffPost Maghreb.

Recurring themes of economic and security reform to which the Al Huffington Post article also alludes as well as several ambiguous references in the letter—that the US should «facilitate the provision of future assistance in each cooperative sector,» and «offer technical expertise to assist the national bank and Ministry of Finance, including advice on fighting corruption» are consistent with political rhetoric that promulgates lofty ideals but fails to delineate specific approaches, methods and numbers.

Finally, if this truly is an ‘open’ letter and sincere effort on the part of American diplomats and experts, should it not have been published in French, and Arabic as well as English? If this truly is an ‘open’ letter, should it not be so to Tunisians as well as Americans (or more appropriately, Americans as well as Tunisians—it is, after all, a letter whose focus is Tunisia…seemingly another Times of India case of contrived self-importance…).

Is this public-to-a-certain-audience consensus formed of original and case-specific goals and recommendations for Tunisia? Or is the letter yet another political gesture along the lines of US discourse and promises that have been made since the revolution, yet another polished and shallow political device to promote America’s image and interests abroad?