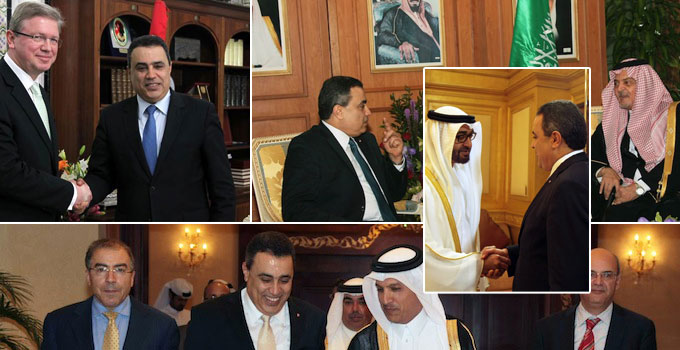 Tunisia and the European Union: Defining the Terms of Economic Assistance

European Commissioner for Enlargement and European Neighborhood Policy Štefan Füle spent two days last week at the Kasbah to discuss the Proposition for the Decision of the European Commission. Füle announced that «In addition to the direct aid granted to the Tunisian government to meet economic, social, and security challenges, a financial solution in the form of grants and loans will be accorded to macro-finance policy» and that of the 500 million euros disbursed to Tunisia over the past three years, 350 million will be directed to macro-finance. The commissioner further reaffirmed the EU’s commitment to supporting Tunisia in preparation for the upcoming elections (for which the EU anticipates sending observers to oversee the election process) and in the reform programs projected to take place once the new government is in place.

According to Tunisie Focus, «In this economically and socially crucial stage, Tunisia relies primarily upon the national effort, but also upon its friends, the European Union first and foremost, to promote a co-development based on neighborliness and the free movement of goods and people.» Indeed, import-export numbers from 2012 reflect the extent to which Europe has been vital to Tunisia’s trade economy, representing the origin of 59.3% of imports entering Tunisia and the destination for 68.1% of the country’s exports. Tunisie Focus‘ estimation of the value of Tunisia’s friendship with the EU is no exaggeration, though much in the same way that one is inclined to be skeptical of US interests and IMF ban and World Bank intentions for development in Tunisia, understanding and dissecting the layers of involvement of major economic entities that seek to ‘support’ Tunisia through its democratic transition is a tedious undertaking that reveals the same patterns consistent throughout history; economic assistance and aid from foreign governments and international entities are predictably manifestations of soft power and/or creating relationships of indebtment and dependency so that the ultimate flow of resources and profits moves outward.

Now this macro-finance assistance from the EU to non-member countries exists within the context of an adjustment program and reform under the IMF and the World Bank which it must complement.Yassine Bellamine

An overview of the accord clarifies that its main objective, in conformity with the Partenariat de Deauville initiative of the G8 forum, is to «support a program of economic reforms while promoting sustainable and inclusive growth and helping Tunisia to cover a part of its residual external finance needs associated with the IMF…» If foreign investment and aid to Tunisia was ever less-than-straightforward, now it is a veritable tangled confusion of economic and political powers and interests.

Economic Support / Political Differences: Jomâa Visits the Gulf Countries
It would seem that the outset of Prime Minister Mehdi Jomâa’s tour of the Gulf countries — including the United Arab Emirates, Saudi Arabia, Qatar, Kuwait, and Bahrain — was more promising than the latter part and lasting impressions of the trip. In his first stop, Jomâa met with UAE leaders at the Tunisian Embassy in Abu Dhabi to discuss the economic and political relations between the two countries. Minister of Foreign Affairs Mongi Hamdi who accompanied Jomâa in the meetings with UAE Vice President and Prime Minister Cheikh Mohamed Ben Rached Al Maktoum reported that the Tunisian government «has decided to take action to re-establish diplomatic ties between the two countries and to bring back the Tunisian ambassador to the UAE.» For his part, Cheikh Maktoum stated that «the new government is working on developing relations amongst the brother and friend countries without wanting to meddle in their interior affairs.»

The same Tunisie Focus that highlights the paramount importance of Tunisia-EU relations during the country’s democratic transition paints Tunisia-UAE relations in a similar light. An article entitled «Mehdi Jomâa Counts on the Gulf Countries to Move Past the Difficult Economic Situation that has Swept Across Tunisia,» reports that «the head of the transition government ascertained that the Gulf countries are among the principle countries upon which Tunisia relies to develop its economy and to move past the difficult economic situation that it has endured throughout this democratic transition.» According to the Tunsie Focus report, Jomâa’s discourse in Abu Dhabi incentivizing investment in Tunisia rested upon precisely the same theme – flow of goods and people between the countries concerned — as his platform with the European Commissioner last week. In the MENA region, Jomâa specifically called for increasing the number of businessmen from the Gulf countries to Tunisia and Tunisian businessmen to the Gulf countries to carry out projects in tourism, agriculture, and industry. Jomâa also touched upon security issues, mentioning that Tunisia and the Gulf countries possess a «shared vision» of how to combat terrorism, a topic that will be further discussed in future meetings.

Upon his return to Tunis, Jomâa reported optimistically that this trip plays an important part in determining the future of economy and security in the country and that the Gulf countries are prepared to support Tunisia through its economic crisis. Director-General of the Arab Fund for Economic and Social Development (AFESD) Abdulatif Al Hamad validated the prime minister’s post-trip reflections, stating that after having discussed the investment opportunities in Tunisia, it has been decided that the institution will disburse a 160 million dollar credit during a meeting projected to take place in Tunis on April 7 and 8.

What reservations the prime minister did not express after his tour of the Gulf journalists have expressed through (at times biting) criticism and concern. In the absence of official acknowledgement of the sensitive topics of politics and religion that were certainly significant aspects of the four-day trip, Tunisie Numerique poses the question, «Tunisia—What Political ‘Fallouts’ for Jomâa’s Visit to the Gulf?» pointing out that what Jomaa did not say regarding contrasting political visions amongst the countries visited will weigh heavily not only on international relations and the actual support that Tunisia might receive from its alliances, but on the conditions for the support (if any) offered.

…certain ‘evasive’ statements that Jomâa made, concerning for example the position that Tunisia should take on the subject of the ‘Muslim Brotherhood,’ glorified and supported by some emirates and classified as terrorists by others, indicate that there will be fairly heavy consequences for the country’s political scene.

The growing assumption is that economic agreements will be contingent upon compliance with foreign political — or more accurately, Islamist — agendas. A Webdo.tn article fleshes out the potential scenario in an article whose title effectively captures the fear of what may come of the political and economic arrangements that will unfold between Tunisia and the Gulf countries: «Mehdi Jomâa faces a Cornelian Decision: Secure Saudi Aid or Preserve Ennahda?» and whose content further prods the issue: «Does this [Jomâa’s interview with Zamil Ayman Al Hamad for Al-Ryadh news] constitute a clue intimating eventual Saudi aid that is contingent upon a decision by Tunisian authorities to classify the ‘Muslim Brotherhood’ as a terrorist organization? And the ‘Muslim Brotherhood’ in Tunisia is none other than Ennahda, whose leader Rached Ghannouchi is one of the emblematic figures of their international structure…»

Terrorism is Contradictory to Tunisia’s Vision of Society
While the political implications of terrorist organizations were discussed abroad, terrorism is omnipresent in national discussions and news headlines this week. In spite of the fact that, «For Tunisia, terrorism is contradictory to the country’s vision of society,» images of blood-stained earth and bullet hole-scarred buildings captured on camera and on film (Tunisie Focus, TN-Médias, Tunisia News Network) permeate press articles and videos since Monday as the Prime Minister completed his tour of the Gulf. The spokesman for the court of first instance in Tunis, Sofiène Selliti, addressed TAP in a press conference on Monday to shed light on two incidents involving national security forces and presumed terrorists in the cities of Jendouba and Sidi Bouzid.

In Cité El Aziz in the northern city of Jendouba, eight casualties were the result of a clash that occurred around 3am Sunday between national security forces and militants implicated in the February 16 attack at Ouled Manaa in Jendouba. Three presumed terrorists, two of whom have been identified Mohamed Ben Khadher Ben Bachir and Ragheb Ben Kamel Ben Hassine Hanachi from Jendouba and a third whose identity remains unconfirmed but who is said to be Algerian, were killed while six members of the national Anti-Security Brigades (BAP) were injured during security operations. The BAP unit who conducted the raid apprehended seven individuals including the owner of the house and confiscated two Kalichnikovs, one grenade, four amunition chargers, a laptop, and a Smith revolver originally belonging to one of three national guard agents who were killed in the February 16 attack.

In a separate incident in Zaafria in the interior city of Sidi Bouzid, two national guard agents were seriously injured when two militants in a truck opened fire on the district patrol unit. Security forces ultimately secured possession of the truck and authorities ascertained the identity of the militants involved, said Minister of the Interior Mohamed Ali Aroui in a press conference on Monday. Meanwhile spokesman Selliti maintained that, in accordance with the antiterrorist law and penal code, investigations will be underway to address last weekend’s incidents which he qualified as crimes of terrorism, complicity, and premeditated murder.