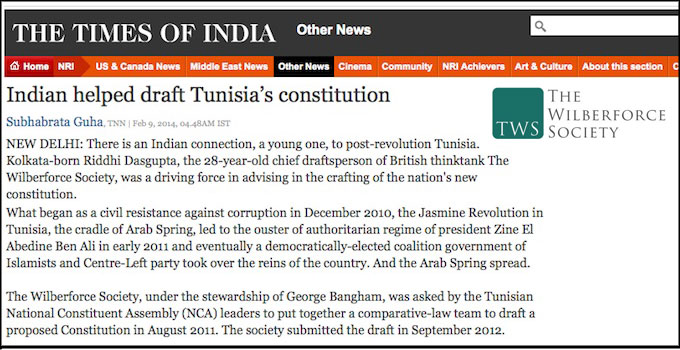 On February 9, 2014, The Times of India published a rather fascinating article. «Kolkata-born Riddhi Dasgupta, the 28-year-old chief draftsperson of British think-tank The Wilberforce Society, was a driving force in advising in the crafting of the nation’s new constitution. » The article proceeds with the usual Tunisia-as-the-cradle-of-the-Arab-Spring background, and explains that «The Wilberforce Society, under the stewardship of George Bangham, was asked by the Tunisian National Constituent Assembly (NCA) leaders to put together a comparative-law team to draft a proposed Constitution in August 2011. The Society submitted the draft in September 2012.»

Tunisians and generally anyone who has followed the country’s democratic transition are not necessarily familiar with the name Riddhi Dasgupta or The Wilberforce Society’s presumed contribution to the drafting process carried out by the NCA. On its website, The Wilberforce Society at Cambridge University describes itself as «the first student-run political think tank to have been established in the UK» and iterates that «We facilitate a unique, mutually beneficial dialogue between Cambridge students and national policy-makers … We work to produce practical yet innovative proposals with their viability and consequences always in mind.»

The Comprehensive Proposed Constitutional Framework for the Republic of Tunisia, «commissioned by the Tunisian Constituent Assembly», is available in its full 121-page text on the The Wilberforce Society website and includes an exhaustive four-and-a-half page bibliography. By any standards, it is an impressively thorough and well-organized document that reflects a substantial amount of research from a variety of international textual and human sources. «The Wilberforce Society (TWS) is pleased to release the product of its largest commissioned project to date. Today, it publishes a comprehensive report, comprising a constitutional framework for Tunisia and in-depth supplementary research.» The project summary reports that the work was carried out by twenty-six experts and students «chosen after a rigorous selection process» and that key Tunisian political actors including Mustapha Ben Jafar, Mehdi Mabrouk, members of Ennahda, Ettakatol, and UGTT as well as international experts were consulted throughout the summer of 2012 in Tunis. According to the TWS website, the project was submitted to the NCA on 26 September, 2012.

A Tunisian Constitution by a British think-tank?

The Society’s lofty undertaking seems to have been accomplished with clearly-defined goals, altruistic intentions, and what one can only imagine would have been a remarkable educational experience for participating students, and perhaps even stimulating, mutually enriching dialogue involving Tunisian and international academics, experts, politicians, and civil society representatives. In spite of the many positives that might be associated with the project experience and resulting document, those who have followed the national drafting process and who have never heard of TWS are likely to be mystified as to why the Tunisian National Constituent Assembly would assign a foreign student-run think-tank the momentous task of authoring (even a proposal of) a constitutional framework for the country.

In hopes of clarifying the nature or context of the NCA solliciting help from TWS, we contacted Mr. Badreddine AbdelKafi who is in charge of citizen-, civil society-, and Tunsians abroad-relations at the NCA. Mr. Abdelkafi denied that the NCA had commissioned any drafting projects to external think-tanks, and that the Assembly had not received the said proposal submission in September 2012. We also got in touch with Michael Campbell, chairman of The Wilberforce Society, who explained that, as far as he understood, Dr. Dasgupta had been contacted by Avocats Sans Frontières (ASF) to produce a draft that would be presented to the NCA, and in turn Dr. Dasgupta contacted The Wilberforce Society to collaborate on the creation of a proposed framework. Mr. Campbell further commented that The Times of India article had exaggerated the think-tank’s involvement in the proposal and that generally speaking he did not claim to have any illusions about the project’s impact on Tunisia’s drafting process.

In keeping with the often black-and-white, simplistic mainstream anglophone media perspective, The Times of India article asserts that «The new Charter, ratified in January 2014, is the first progressive document in the Arab world and presages a new era for Tunisian state’s relationship with its citizens and the rest of the world.» With emphasis heaped upon the importance of Dr. Dasgupta’s drafting work, the article describes that an international team worked «keeping in mind Tunisian wishes,» and Dasgupta is quoted, «…without the Tunisian people’s help, we wouldn’t have been able to produce the draft.» Is it not after all the Tunisian legal framework we are discussing? Is it not after all Dr. Dasgupta’s and TWS’ help which is secondary in producing a new constitution? While The Times of India hyperbolizes and gloats over its contribution to the so-called first progressive document of the Arab world, Tunisian politicians and civil society have turned their attention from the novelty of constitution drafting and ratification to matters of daily life where the significance and implications of the new constitution are the social and economic conditions that determine quality of life.

Ibn Khaldun said that truth is like water which takes the form of the vase that contains it. What a bit of confusion, provoked by the contrasting claims of a news journal, a think-tank report, a think-tank chairman and an NCA member, boils down to is the inevitable and interesting consequence of the international pluralistic diffusion of news and information, spun by different sources like a storyteller spins a story which is ultimately and merely a vehicle for his intended message.