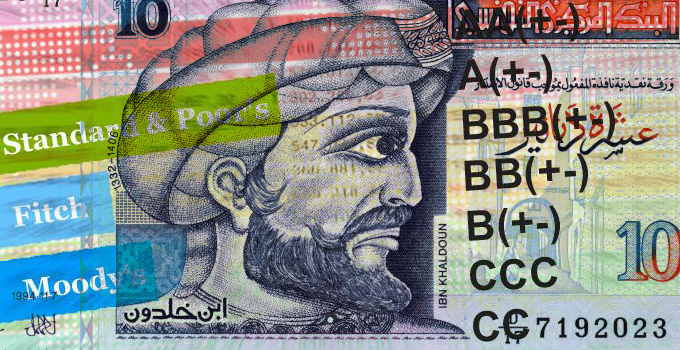 I came across this letter by Patrick Raleig in which he respond to an article by M.B.A which was published by Nawaat. Well, I am a little behind the curve here but given the importance of this issue, I couldn’t retain myself from writing the following lines.

First of all, the failure of the rating agencies before the subprime crisis is complete and total. That’s an undeniable fact and the huge effort that those agencies are making to restore their credibility will not, in any way, change that fact. And you should not listen to anyone who is telling you otherwise even if that person is Patrick Raleig.

For those who are not familiar with the technicalities, let me give a very simple analogy of what happened: consider a market for used cars. Suppose that, before entering this market, the law requires every seller to have his cars’ condition examined by a technician who assigns one of two grades: GOOD or BAD. The technician fees are paid by the sellers. Suppose also that there are only three technicians available and they compete to maximize their respective fees.

It’s very clear here that we have a conflict of interest situation since all three technicians will be tempted to systematically give GOOD rating to every car in order to maximize their profits. Now if the buyers rely exclusively on the GOOD/BAD evaluations, they face the risk to buy junk cars thinking they’ve made pretty good deals. This is exactly what happened with the rating agencies. They’ve given junk securities AAA grades because they feared for their profits.

Now, one might ask who am I to judge these giants? Well, you have every right to question my judgements since I’m not speaking from authority here. But let’s see what the most prominent economists in the world are saying about these agencies:

It’s comforting to pretend that the financial crisis was caused by nothing more than honest errors. But it wasn’t; it was, in large part, the result of a corrupt system. And the rating agencies were a big part of that corruption.
Paul Krugman

The rating agencies as one of the key culprits… They were the party that performed the alchemy that converted the securities from F-rated to A-rated. The banks could not have done what they did without the complicity of the rating agencies.
Joseph Stiglitz

These agencies have repeatedly been proved wrong; they have flawed and frequently conflicted business models; and their ratings have no predictive power. All this is well established. Moreover, when it comes to assessing sovereign debt “credit risk” they – and I mean this quite literally – do not know what they are talking about. By that, I mean they quite simply don’t understand what they themselves are saying.
Jonathan Portes

John Bellows via Brad DeLong: “The Rating Agency Clown Show: S&P claims that their $2 trillion baseline error is “not material.” John Belliows watches them put on their rubber noses and throw the custard pies at each other”.

So, I’m really having a hard time here seeing the point of Mr. Raleig’s letter. Maybe he thought that by arrogantly bulling M.B.A he could single-handedly restore the aura of prestige that the rating agencies enjoyed before the subprime crisis came along. Obviously he was very wrong!