Tunisia : The case of Amin Alkarami reveals the identity of an army sniper

Those following the process of transitional justice in Tunisia are agreed that one of the prerequisites for effective reform is knowing the truth of what happened from 17th December 2010 onwards. Just as important is that it is made clear who will be responsible for bringing the accused to justice, in a serious and transparent manner, in order that people have confidence in the judicial system and can begin to look to the future.

At present, we are a long way from such a state of affairs. The cases in question were first looked into on 24th February 2011 when the first inquiry was launched by the public prosecution at the Court of First Instance in Kasserine. Since then, the affair has been hushed up and those accused have been able to escape justice.

The Interior Ministry allowed those responsible to keep their jobs and, after a succession of different ministers, Ali Laarayedh took up his post only to fail to launch any sort of inquiry into the actions of the security forces between 17th December and 14th January 2011.

As for the Military Establishment, their promise to bring to justice the sniper that was handed over to them after 14th January turned out to be a hollow one. This fact, coupled with the various anomalies during the military hearings on the deaths of the martyrs of the revolution have led many analysts to speculate on whether the military justice system is, in fact, still subject to the old guard in the Interior Ministry. What’s more, it has meant that many have begun once again to ask questions about the role played by the army before and after 14th January.

Having previously covered the meeting held by the families of the martyrs of the revolution in Kram on Saturday 28th July 2012 under the heading “Who killed the martyrs of the revolution and why is the military justice system ignoring the evidence?”, we are launching today an investigation into a case the analysis of which has only ever been superficial and which, as a result, has remained shrouded in mystery.

We will try, during this investigation, to unearth the truth of the army sniper implicated in the murder of 17th January 2011 and the subsequent attempts by the military courts to cover it up.

Among those files whose details have been covered up, either during legal or media investigations, is that of the government snipers. Politicians, legal professionals and many others have commented on this case, with some tackling the wording of the law and others challenging the claim that snipers could were even used during the period in question.

Case number 4283 of the Permanent Military Court of Tunisia, or the case of martyr Amin Alkarami, contains some very serious findings which will hopefully mean that the file relating to the role played by snipers during the revolution is opened up for proper and comprehensive scrutiny.

The man accused of killing Amin Alkarami on 17th January 2011 is soldier No. 655 Mohamed Assabti Ben Misbah Ben Mohamed Mabrouk, a sniper in the army.

The judge, from the third office of the Court of First Instance in Bizerte, in charge of investigating this case, Mr Imed Boukhris, uncovered the circumstances of the crime and the responsibility of the sniper for the death of Amin Alkarami before the case was dropped on 31st March 2011 on the basis of Chapter 52 of the Code of Criminal Proceedings and Paragraph 6 of Chapter 5 of the Military Sanctions and Procedures Code which states the following:

“The military courts are required to look into any crimes in contravention of public law committed by or against soldiers during active service.”

The civil justice courts therefore dropped the case on the basis of Chapter 22 of Law No. 70 (drawn up on 6th August 1982 ) as well as revised Law No. 58 (13th January 2000) relating to the basic laws governing internal security forces which states:

“The military courts are referred to in any cases relating to incidents in which agents of the internal security forces have been implicated and which have threatened the internal or external security of the country or the maintenance of order on the streets, in public or private spaces during or after public meetings, ceremonies, demonstrations or gatherings”.

Accordingly, the Permanent Military Court took charge of the case and held three sessions which were conducted in secret. In theory, this case was to be heard in the open, but the way in which it was managed meant everything was conducted behind closed doors. In spite of the charges of murder laid against the sniper Mohamed Ben Mabrouk in October 2011, a crime whose appropriate punishment is detailed in Chapters 201 and 202 of the Legal Code, he remains, to this day, a free man.

The third hearing of the case of Amin Alkarami took place on Tuesday 31st July 2012 and any further investigation has been postponed until 3rd October 2012.

According to Amin Alkarami’s father, Hassan, observers or journalists were denied entry into the session. This was confirmed by Sharaf Addin Alkelil, a member of the “Group of 25”, who also told us that army major “Farhani” limited entry to the court to parents or wives. They boycotted the trial in protest.

Our conversation with Hassan Alkarami about what happened and the evidence he submitted to the military and civil courts.

So why does the military court want to keep the details of this affair secret? And why has the accused gunman been allowed to keep his position in the military?

These are pivotal questions and, by providing some context to the various theories on offer, we can begin to sketch out a version of the truth.

We have managed to get hold of the file of the military and civil investigations relating to this issue. In consideration of the seriousness of its contents, we have decided to make it available to the general public as well as any analysts or experts wishing further to look into the case.

For our part, we have noted, first of all, that the judge in charge of the third investigation at the Court of First Instance in Bizerte practically confirmed the responsibility of the army sniper for the death of Amin Alkarami.

In the same document, the coroner concluded, after the post-mortem of Amin Alkarami, that:

1) The death of Amin Alkarami was the result of brain trauma caused by a single gunshot wound delivered by a highly accurate non-automatic weapon.
2) The post-mortem examination was able to show the path of the bullet into the skull

The findings of the examination conducted on the two fragments of shrapnel removed from the head of Amin Alkarami by the Scientific and Technical wing of the Police Administration, Weapons and Ammunition Sector, gave the following results:

According to the definitions contained within Law 33 of 12th June 1969 relating to the supplying and handling of weaponry and ammunitions, it can be confirmed that the two fragments found during the examination came from the cartridge of a first grade weapon. Their entry into the Republic of Tunisia is completely forbidden by any means. However, special permissions can be granted by the Secretary of State for the Interior following consultation with the Secretary of State for National Defence. Such exceptions can only be made under certain special conditions, meaning that under no circumstances should first grade military weaponry come into the hands of private individuals.

In addition to this, the judge in charge of the investigation Imed Boukhris said, in a concluding statement after announcing his decision to drop the case:

It is clear from the witness testimony, the report of the coroner and the examination of fragments removed from the head, as well as the evidence of obstacles which would have limited the field of view, that the bullet which injured the deceased, Mohamed Amin Alkarami, must have been fired by a soldier in the Army Technical College in Bizerte.

After the military court took charge of the case, the army sniper Mohamed Ben Mabrouk was called as a witness on 2nd June 2011 by the judge presiding over the investigation at the second office of the Permanent Military Court, staff sergeant Monji Bram. He was subsequently questioned, by the same judge, as a murder suspect on 29th October 2011, at which time he admitted to having used, and to being trained in the use of, a sniper rifle. We also noted some contradictions in the accounts he gave. In the witness statement he claims to have responded to the gunfire of a civilian carrying a machine gun whereas he fails to mention anything about this during his subsequent questioning.

One is also struck, in these documents, by the time it took for the Head of the Army Technical School to hand over a sample cartridge to the judge leading the military investigation.

The most startling discovery was to be found in the ballistics investigation overseen by the military court which completely contradicts itself.

In a secret note dated 26th May 2011 it is stated that it was not possible to determine the type of cartridge or firearm used used due to the small size of the fragments that had been found. However, in an accompanying note attached to a document dated 21st September 2011 it is definitively stated that the cartridge is a 5.56mm, which also contradicts the ballistics report provided by the civil authorities.

Why did the ballistics report state a different cartridge size to that which the accused himself admits to having used? Does this have to do just with the size of the cartridge or does it have more to do with the sniper Mohamed Ben Mabrouk and the nature of his job in the military? Since 7.62mm caliber ammunition is used in a number of weapons used by the army and the police, the real question is: who is Mohamed Assebti Ben Misbah Ben Mohamed Mabrouk and what was he tasked with doing before 14th January?

Another important element in this case concerns the appearance of a number of videos showing unidentified snipers. One video in particular has caught the attention of those following this case, filmed as part of a programme entitled “Envoyé Spécial” which was broadcast on France 2 while they were in Kasserine after the flight of Ben Ali. The videotape shows elements of the national security forces fleeing from the area and attempting to conceal the sniper rifles that they are carrying. The programme went on to note that there were 45 snipers working for the Presidential Security Force which seems to go against Yusri Aldali’s claim that there were no more than 15 snipers working for this force, that he knew each of them very well and that none of them appeared on the programme broadcast by “Envoyé Spécial”. 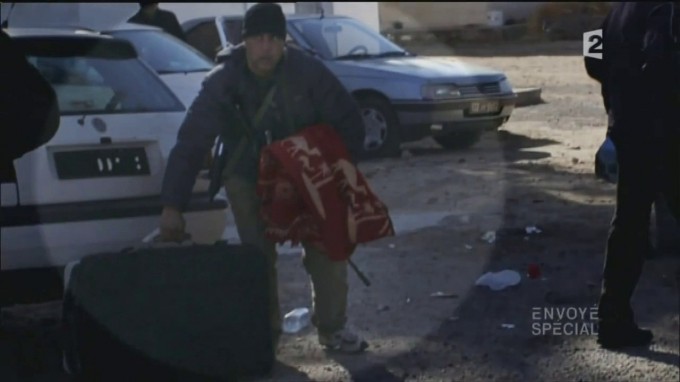 We also spoke to the former officer and now retired sergeant from the National Guard Tahar Ben Yusuf, the author of the book “Snipers During the Tunisian Revolution and Security Reforms”, about this case in general and also about the the French videotape. He was of exactly the same opinion as Yusri Aldali.

So what is the truth of the snipers in Kasserine? Why hasn’t the military court made their identities public knowledge? Why did the army cover up their withdrawal? And where are they now?

By way of conclusion, we call upon everyone following this case as well as any experts in studying published documents to help in the investigation of this case just as our friend and colleague Anis Almansouri has done in this analysis of the file on the martyrs of Thala and Kasserine. In short, we call upon everyone to help solve the mystery of the Tunisian snipers.

Translated from arabic by Chris Barrie