[Editor’s Note: Here are two articles written by one of Turkey’s best-known journalists and political commentators Ece Temelkuran in which she criticized the regime’s repressive policy towards journalists and its militaristic policy towards Kurds, a policy that culminated recently in the Uludere massacre that killed over 35 people among them 19 kids. Ece Tumlekuran’s articles were published last week on her former newspaper Habertuk and resulted in her firing from the newspaper under what seemingly was a political pressure from the political establishment.] 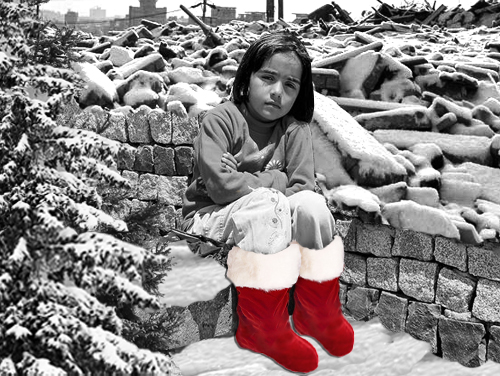 Both articles were written after Prime Minister Recep Tayyip Erdogan’s speech about the Uludere massacre that happened on 28th of December. He accused those who described the bombardment as being a massacre of serving terrorism. 35 smugglers thought to be “terrorists” were killed in the bombardment. 19 of them were kids aged between 12 and 15. The PM said that anyone who refers to Kurdish roots of the deceased are “undignified”, “separatists”. In the same speech he insulted Kurdish MPs who criticized the government saying that the MP’s have “leashes” around their neck and that “They can not even go to the toilet without an order from their master”, referring to the PKK Kurdish armed movement.

Prime Minister, as he frequently does, accused the media of being cruel against his government in another speech. Referring to the arrested journalists’ cases he said that there are “important things” that journalists don’t know about the cases! He very strictly warned the media to be careful about their reporting about the cases. There are more then 100 arrested journalists in Turkey and national media avoiding the cases. The mainstream media keeps silent about almost in all important incidents. Especially during the Uludere incident entire mainstream media waited for Prime Minister’s related official statement which came after 11 hours.

In the article “the palace” refers to Interior Minister’s “joke” during his visit to Van earthquake’s victims. Referring to the plastic tents they are inhabited he said “So you are living in a palace, ah? Unknown number of babies froze to death in those particular tents. We still don’t have the death figures due to the fact that the news were obscured after Prime Minister’s strong warning to media about the coverage on shortcomings of the government’s aid.

“The big thinking” comes from the slogan of the governing party AKP’s election slogan: “You are Turkey! Think big!”

Both articles are translated into English by Ayça Tomaç

We got it, you want us to be quite saying “they know better” when you kill kids. You bomb people, we bury them after carrying them on donkeys silently, you use billion dollar bombs killing us but you want us to carry our bodies ourselves, walking through mountain tops under snow. Before we opened up the doors for accepting condolences, before the voice of our requiem even heard, before we even start mourning, you say “stop!”, you want us to go home, watch tv eating sunflower seeds, be idiots, not even exist, go somewhere to die all alone, remain silent while dying without leaving a trace behind that would bother you after us.

We got it, you want the earthquake to bring the roof on top of us, you put us in plastic tents under freezing weather then grinning at us “you are living in palaces, boys!”, we bend our heads, we never get cold, without a tear we sell the shoes “never worn” by our babies that were frozen to death, with that money we get some sunflower seeds, go home and eat those seeds, stare at the tv, be idiots, one night in our sleep we freeze to death, silently, never ever be trouble to you again, we don’t have even a headstone on our graves so that you won’t get sorry, you want.

We got it, you want no one to know anything about each other, no one cares for each other, you want journalists, students, professors, labor union members, lawyers, whoever disturbs your “big thinking”, you want all of them to live in jails from now on, you get their pens and papers and give them rationed food instead, in there you want them to live their lives to the end like animals without even talking to each other. And for us, you want us not to care any of this, our sunflower seeds, our tvs, live and die in peace like pigs, you, without any trouble, do your ribbon cuttings of your “projects”, ribbons all over, cheers, balloons and seeds you want.
We got it, you say this today, that another day, one of you says this, another says that, you say peace you say war then peace again then war again, in between doing reform, undoing reform, you utter whatever pops up in your head, we “reset” our memories everyday, every morning we have a brand new mind, like a mirror, never questioning, whatever you say in the morning that word would be the first word for us, the last word is yours, we always believe in you, never listen to anyone else, you are always right, you become more right and we like idiots sit and say “oh yes for sure, we are looking forward to your next speech sir!”, get our sunflower seeds, we always wait for you, ignoring everyone else, you want us like this.
We got it, you make us forget the memories of our children who died the day before with your conspiracy mongers. You don’t apologize, you never ever on this earth apologize, our kids shall always be snacks for your kids, dead or alive our kids shall always serve your “big thinking”, our kids who had to smuggle cigarettes from the borders to make money for school shall be all yours, use them, abuse them, if you cannot do so, get mad, sit on our throat, our neck, our heart shall always be open to you, you want.
We got it, this is what you want. We learned this all by heart. You taught us quite well, thanks! Now, look at the mirror, sir! This is you! You are this. This is what you are. And you learn this sir! We are the rest of the country. We got you, now you get this: we give up! We don’t agree! We don’t listen! You keep ordering! You keep talking up all to yourself! We are not listening to you!

Say, we are so terrorist people. Horrible we are, we’re terrible. “Do not come closer to us!”. This is how bad we are. But kids are dead. 19 in total. Say even they are not Kurds. “Mountain Turks” they are. Their ethnic roots come from the sound of the steps of those “mountain Turk” kids who can only afford education by going through smuggling in the mountains. But still, whatever you say it counts 19 dead kids.

For instance, we are so much like daemons. Wherever the devil resides, we are just right there. This is what we are! We are bad, with no limit; we are like “the bad guy” in old Turkish movies, that bad, you know! Say, we never love the Prime Minister; we are quite annoyed with him, that is the reason we are crying for these kids. I mean for a moment say this is so. Say this is so; our only effort is to bug this government, to trouble it. We are troubled people. Best shall all the doors closed on our faces. Even better: Shall all the doors, especially the ones with iron bars, be closed on us; alright, do it! But still, it makes 19 dead kids.

How many Kurdish MPs are there? OK, say they all call someone asking permission before visiting the toilet. If they are not called, they cannot visit the toilet. Interesting! We are cool with even this: They have these invisible leashes around their necks. Well they had tails before, why not leashes? So be it, OK. Kurdish MP Selahattin Demirtaş is the most troubling one of these toilet bandits. Oh wow! It’s really that bad! Even say this: we are all, altogether with whoever crying for these kids, waiting for orders in front of toilet doors. From dawn to dusk. I mean we are that messed up. We gotta pee right now/we are stuck. Let’s say. Look, still it makes 19 kids.

Noone dare to say Kurd! Hush!!!! Silence! Shut your mouths! Now close your eyes! Why ain’t you covering your ears?? Are you a separatist? Hush! No one speaks! Do not dare to speak! Now…ok, now this is silence. Hmm….but even counting like this, it’s 19. What to do now?

We, for instance, shall speak of the Kurd no more, say only AKP from now on. Like a prayer, from dawn to dusk. 5 times a day we praise your party. Our guides shall be their journalists in their newspapers. We shall not dare having a troubled thought even for a moment. We shall constantly build your lovely highways, nice and easy all the time, always nice and easy as your beloved song goes “we walked through these roads together”. We shall become nice and easy people, with red cheeks, eating grapes as you adviced as once, with three kids as you suggested. Well, even in this case we have 19 kids dead. Here is what we do: everyone listens to the Prime Minister’s speech, but no one listens to Kurdish MPs’ speech. It has been like this, but it shall go on like this! These Kurdish politicians are quite unamiable anyways. Aren’t they a little annoying? Like they are not there yet. Thank god, thousands of Kurdish politicians are arrested for KCK case so that we could breathe freely. I think there should be more arrests. Noone should be remained outside. At least there will be no more traffic problems, no? This is how it is done. Noone is outside. Prime Minister’s voice can be heard with a great echo in every square of the cities. Cause apparently there is no one on the streets. But still, there are 19 dead kids lying there.

Apparently everyone is suddenly drugged, no one from now on will follow the case of their dead kid. Say, this has become that kind of a mad country. Their kid die and they forget his name just like that. No one remembers. So awesome! Say the minister of interior affairs is on tv every night, making his stupid jokes. We all adore him. We bend before him out of respect. We all listen to him, his words in our ears, tears in our eyes. Say, we are all gone crazy! But see, the problem is that 19 kids are still in the grave.

Count from here, count from there. Now once more, add and subtract again! Oh boy, it’s always 19, huh? There are 19 kids totally dead. How to pretend like they aren’t dead?