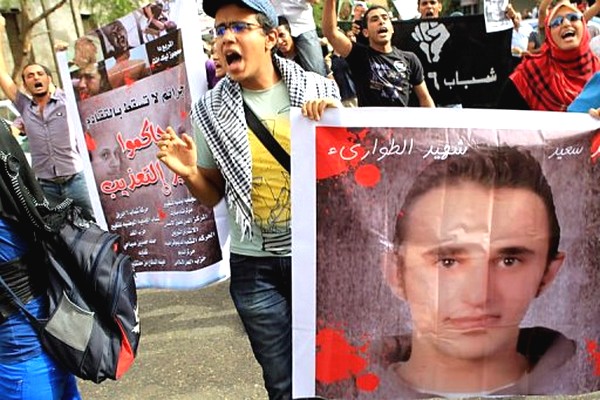 Khaled Said is not the first Egyptian whom police allegedly beat to death. But his death has sparked a virtual revolution that is affecting Egypt’s tightly controlled society.

Said, a 28-year-old Egyptian businessman, was brutally beaten, his family and activists say, by two plainclothes police officers on June 6. An Interior Ministry autopsy claimed that Said suffocated after swallowing a bag of drugs he tried to hide from police. But a photograph of a shattered body that his family confirmed was his started circulating online. Teeth missing, lip torn, jaw broken and blood pouring from his head: It was difficult to square such trauma with suffocation. His family said he was targeted after he posted a video online allegedly showing police sharing profits of a drug bust.

If social media in the Arab world were merely outlets for venting or “stress relief” — as detractors claim — then Said’s fate would have ended with some angry comments on Facebook and a tweet or two railing at the Egyptian regime.

Instead, thanks to social media’s increasing popularity and ability to connect activists with ordinary people, Egyptians are protesting police brutality in unprecedented numbers. On July 27, the two police officers connected to his death stood trial on charges of illegal arrest and excessive use of force. If convicted, they face three to 15 years’ imprisonment.

While social media didn’t invent courage — activists have long protested the tactics of President Hosni Mubarak, a U.S. ally who has maintained a state of emergency in Egypt since assuming office in 1981 — the Internet has in recent months connected Egyptians and amplified their voices as never before. There’s an anti-torture Web site with a hotline to report incidents. The independent advocacy group El Nadim Centre for Rehabilitation of Victims of Violence publishes an online diary that has documented 200 allegations of abuse since February. On another site Egyptians post pictures of abusive police officers.

This week, a woman in a full-length veil went on television to accuse two police officers of raping and robbing her. Her tearful segment has gone viral on YouTube.

Detractors say that social media sites are just the latest platforms from which “apathetic” Arabs now tilt at windmills. Facebook has not overthrown a single Arab dictator, and Twitter has yet to topple any regimes, the thinking goes.

But the better points to assess about social media have to do with their effect on young people in the Arab world — the bulk of the population — and the loosening of long-established controls.

An estimated 3.4 million Egyptians are on Facebook, according to Spot-On, a public relations firm, making Egypt the No. 1 user in the Arab world and 23rd globally. Nearly 2 million Egyptian Facebook users are younger than 25. As with Facebook users everywhere, Egyptians post embarrassing pictures, flirt with strangers and reunite with school friends. But to appreciate social media’s growing importance in challenging authority, consider the events between Said’s death and the trial of the two police officers.

After the photograph of Said’s corpse started circulating on Facebook and Twitter, a protest outside the Interior Ministry in Cairo was the largest in living memory against police brutality.

At least 1,000 people attended Said’s funeral, which became an impromptu protest. A new autopsy was ordered; it confirmed the Interior Ministry’s initial claim but acknowledged the presence of bruises on Said’s body.

Several Facebook pages and groups were launched in memory of Said, including “We Are All Khaled Said,” which sent out the call for silent protests in black and now has more than 220,000 fans.

Egyptian activists and everyday citizens, including families with children, turned up in unprecedented numbers. Reuters reported that as many as 8,000 people dressed in black took part in one protest along the promenade in Alexandria, Said’s home town.

The government tried to paint Said as a pothead and petty criminal who tried to evade national service. It suggested his brothers had converted to Judaism.

“They think the people are stupid,” a group of Egyptian rappers sang in response. Their video is available on YouTube and has been shared on Facebook and Twitter.

Egyptians who realize that any one of them could have been Khaled Said have the chance through social media to challenge the state and its once-absolute ownership of the narrative. There is a difference, of course, between the real world and the virtual world. Social media won’t overthrow regimes. But such sites have given a voice and platform to young people long marginalized by those regimes.