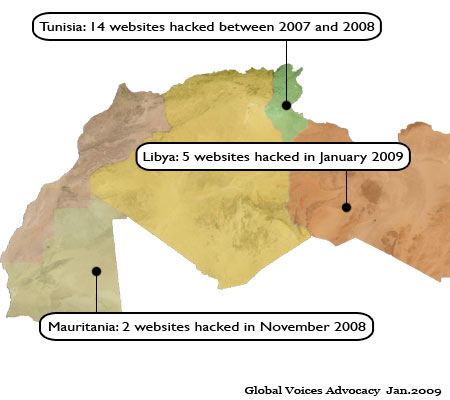 Political opposition websites in North African countries, particularly in Tunisia, Libya and Mauritania, are becoming a primary target of hackers. This new phenomenon of defacing opposition and dissident websites emerged first in Tunisia, where at least 14 websites and blogs were targeted between 2007 and 2008, and seems to be spreading across the region as a result of the attempt to muzzle free speech both online and offline.

Even though it is not clear yet who is behind these hacking attacks, North African opposition leaders and owners of the targeted websites all agree that their regimes are behind this new way of cracking down on oppositional activities online.

Naziha Rejiba, from the Tunisian online kalima magazine and Deputy President of the Observatory for the Freedom of Press, Publishing and Creation in Tunisia (OLPEC), was summoned recently to appear before a public prosecutor, after she openly accused the Tunisian authorities to be behind the destruction of Kalima website, in October 2008.

In a statement protesting the hacking of Libyan oppositional websites, the Libyan league for Human Rights (LLHR) and Libya Human and Political Development Forum [in Arabic] also accused the Libyan authorities of orchestrating these Cyber attacks.

In Mauritania, and while Sahara Media, considered to be the first news site in the country, accused “national and foreign parties” of hacking its website, Sheikh Ould Ahmad Amin, editor in chief of Anbaa, another hacked website, told Menassat that “the current military regime that ousted the first elected government in Mauritania, is directly or indirectly linked to what happened.”

According to a statement by the Libyan league for Human Rights (LLHR) issued on January 19 2009, six Libyan oppositional websites were hacked into and shut down in January 2009. The hackers defaced the websites and displayed content from the Algathafi, a personal websites that contains the thoughts and visions of the Libyan president Muammar al-Gaddafi. Five from the six targeted websites remain off-line:

According to Hack In The Box website, at least two influential Mauritanian websites were hacked in november 2008. Both websites are critical of the military junta led by General Mohamed Ould Abdel Aziz:

The Sahara Media news agency, considered the first news site in Mauritania, was also disabled for one to two days, while anbaa was not only hacked, but its office in Nouakchott was vandalised and computers were stolen, said Maloum, who is the coordinator of the For Mauritania website, a lobby group.

The attack against the Anbaa website seems to be connected to the website’s intent to publish content related to scandals involving politicians and senior public figures in the country.

As highlighted in a previous report on Global Voices Advocacy, almost every single Tunisian opposition website and self-hosted blog has been the victim of one or more hacking incidents. Given the frequency of the attacks and the nature of the targeted websites and blogs, there is a strong feeling among Tunisian opposition figures and Human Rights defenders that the government is carrying out these cyber-attacks. “I would not rule out the possibility that this act was committed by the secret services, with the aid of hackers or pirates based in Tunisia or abroad,” Kalima editor-in-chief Sihem Bensedrine said.

This is a non comprehensive list of targeted blogs and websites between July 6th, 2007 and November 05th, 2008: