The bodyguard asked for an ID and wrote down our journalist’s name and personal details in what seemed to be a visitors’ log. When Meshkal/Nawaat requested an interview with a spokesperson or a PDL Member of Parliament (MP), a secretary explained that any such request required the personal approval of Abir Moussi herself. 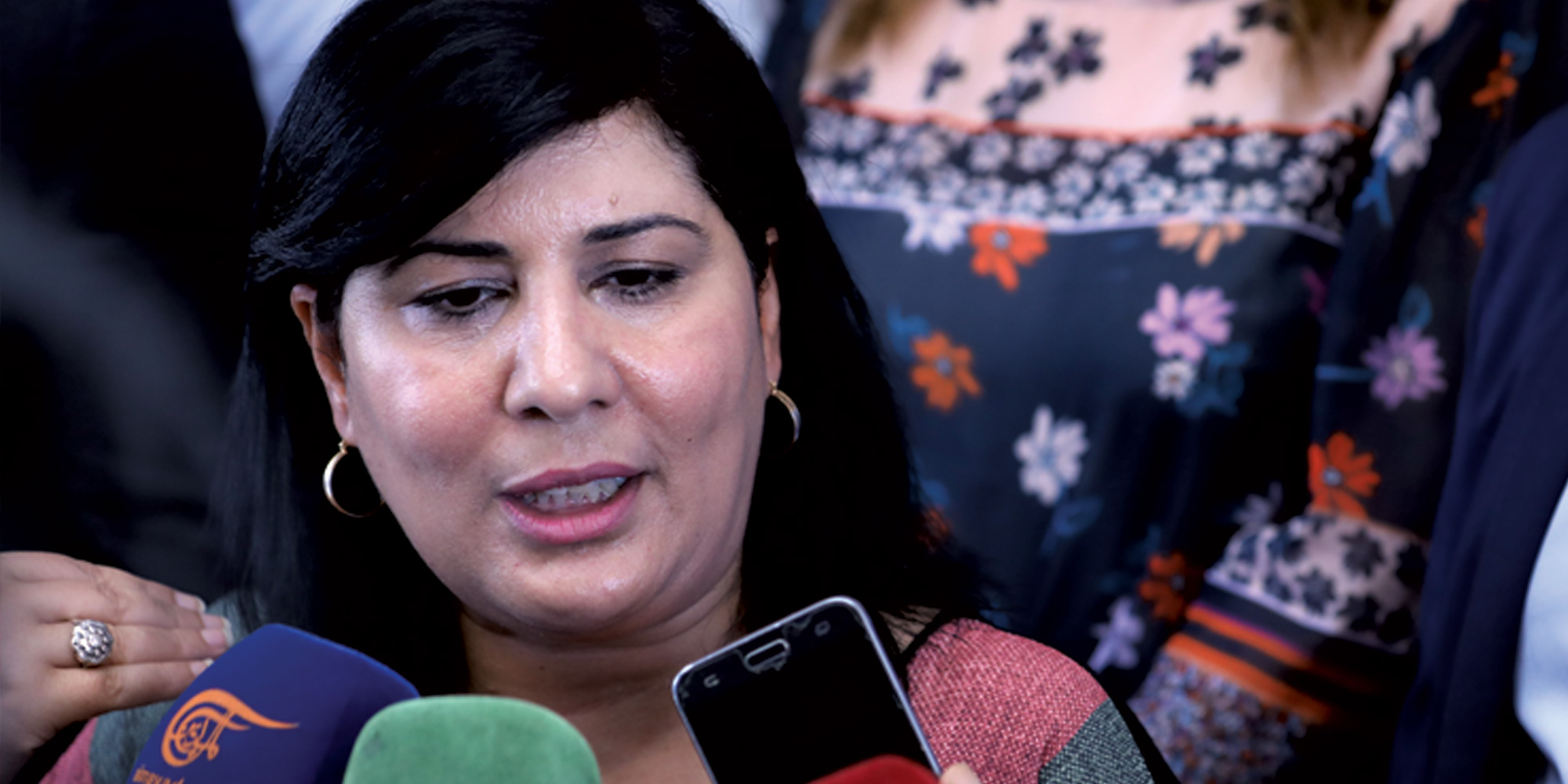 “We still need her to say yes first and then you could talk to whoever you want,” the secretary told Meshkal/Nawaat after asking to review Meshkal’s website. Meshkal/Nawaat has still not received a response or follow up. A separate direct request for comment to a PDL MP was subsequently declined.

One reason PDL may be declining requests from the press is that on March 18, the National Union of Tunisian Journalists (SNJT by its French acronym) called on journalists to boycott Moussi until she apologized for what they said was Moussi’s “terrorizing” journalist Sarhane Chikhaoui in a Facebook live video feed she had shared of herself from Parliament the day before, on March 17.

The National Union of Tunisian Journalists expresses its dissatisfaction with these fascist practices aimed at terrorizing and stigmatizing journalists in order to confiscate their opinions and use them in this war that does not concern them,
the SNJT statement read.

Moussi had earlier, during a Facebook live video, insinuated she had observed Chikhaoui engaged in sexual activity with a parliament staff member in one of the offices. One SNJT member speaking off record told Meshkal/Nawaat that since the SNJT statement, Moussi and the PDL have not been granting interviews to journalists in reaction to the SNJT’s boycott of Moussi.

A Threat to Democracy?

The SNJT’s use of the phrase “fascist” to describe Moussi’s tactics has been echoed by others, and many see Moussi and the PDL as a threat to democracy in Tunisia.

If we analyze [Moussi’s] speech, announcements and declarations, we will see that she is…sometimes [in] confrontation with many elements of a genuine democracy; civil society, media, other political parties,
Amine Ghali, director of Al-Kawakibi Democracy Transition Center told Meshkal/Nawaat.

Moussi is known for her strong opposition to the 2011 revolution, often referring to it as a “coup” and “conspiracy.” The PDL came third in terms of votes in the 2019 parliamentary elections and fifth in terms of seats with 17 out of 217. Despite this small minority of seats, the PDL has managed to use this power to block the legislative process using protests, sit-ins, and media spectacles. 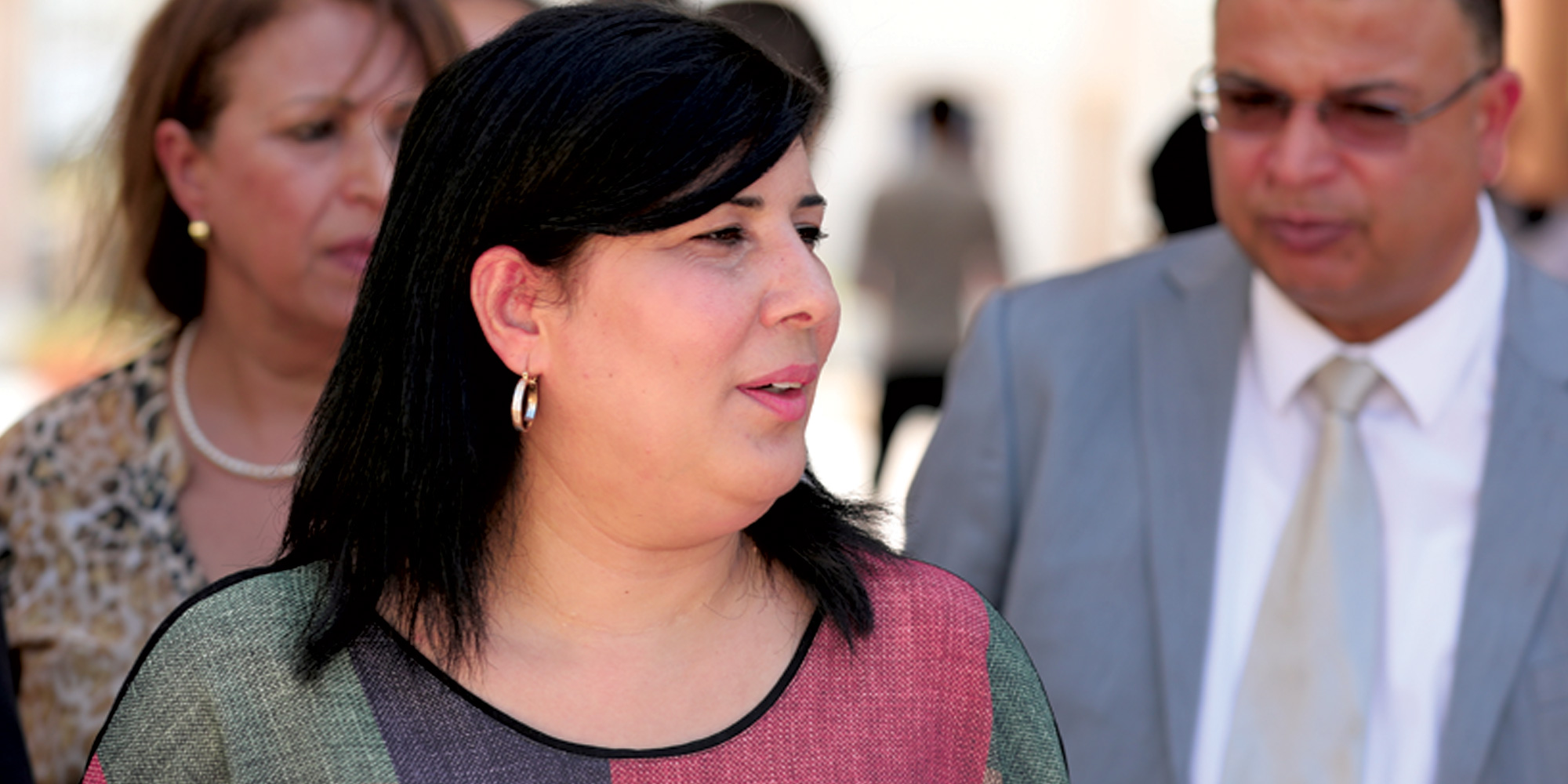 “We can also judge her on her deeds…as of today, she is attacking or hampering the work of one of the main democratic institutions in the country, which is the parliament,” said Ghali. “The only power she has is to disturb the work of the parliament and she is doing a great job in the disturbance of the institution.”

While the PDL only has 17 seats, recent polling suggests they might perform much better in the next elections. In an opinion poll conducted by EMRHOD Consulting in February across all 24 Tunisian governorates, 42 percent of the 1420 people polled expressed their intention to vote for the Free Constitutional Party (PDL by its French acronym) in the hypothetical event that parliamentary elections be held “tomorrow.” This put the party far ahead of the Ennahdha Party in second place with 20 percent, and the Democratic Current and QalbTounes tied at third with 6 percent.The next parliamentary elections are due to be held in 2024.

“If she keeps the same approach of this disregard and disrespect of institutions, this could be a huge disturbance to democracy in this country, especially that we might see in the future if she gets into some form of power,” Ghali said.

Abir Moussi and the PDL have opposed what they see as political Islam and the Ennahdha party, which Moussi has often referred to as “The [Muslim] Brothers in Tunisia,” and she has called for Ennahdha to be outlawed as it was for decades under the Ben Ali regime

Malek Mhamdi, a 22-year old supporter of PDL, told Meshkal/Nawaat she believes this consistent position against political Islam is what makes her appealing to many people.

“She is in boycott against political Islam and does not normalize with it…this is very important to me,” Mhamdi said. “I believe that all of our problems stem from political Islam… we need to fix that, otherwise we have nowhere to go.” 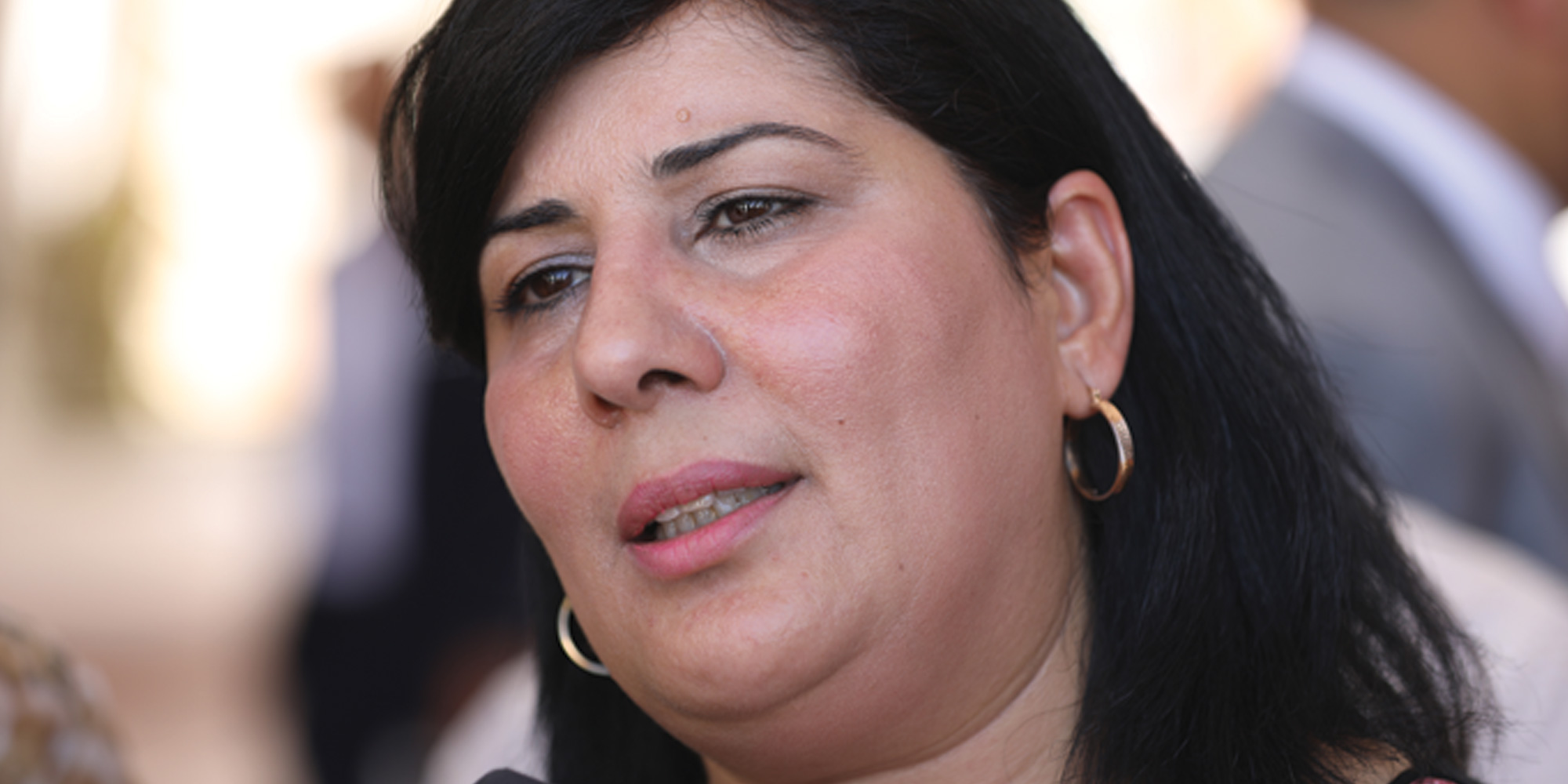 Ghali of the Al-Kawakibi Democracy Transition Center believes the effectiveness of this anti-Ennahdha rhetoric may be amplified because people blame Ennahdha for the continuing social and economic crisis. This crisis is also seen as a verdict against the 2011 revolution, since the overall economic situation appears to have deteriorated since then.

“During these past ten years we have been witnessing economic destruction… we are talking about a state’s bankruptcy,” Mhamdi, the PDL supporter, told Meshkal/Nawaat.

A conditional loan program to Tunisia from the IMF set up since the revolution has resulted in the devaluation of the Tunisian dinar which has in turn triggered significant inflation and an increasing trade deficit. Meanwhile, the economic reform program attached to these loans have not reduced unemployment, stagnant at about 16 percent since the revolution, while austerity measures have produced significant cuts to public services in every sector except defense and policing. This economic deterioration may have fed into an overall nostalgia for the old regime.

“In almost every experience of transition, there is a form of almost nostalgia for the past and Abir Moussi illustrates perfectly this nostalgia…She is navigating on this wave of Bourguiba era, sometimes even mentioning the Ben Ali era, while I personally think that she is a pure daughter of Ben Ali’s era,” said Ghali.

While Moussi and the PDL may not be talking to journalists, Moussi’s own ability to bypass journalists and speak directly to supporters through rallies and social media may be another factor behind the PDL’s recent surge in the polls.

In a live video stream shared via her official Facebook page that lasted for about two hours and had over 320.000 views as of this article’s publication, Moussi showed her followers what she claimed to be an attempt to prevent her from entering certain areas of the parliament building, namely the office of the speaker of Parliament, Ennahdha leader Rached Ghannouchi.

“I am the epitome of opposition here…they want a parliament without opposition…the opposition is forbidden from entering the [speaker’s] office of the Parliament…This is no democracy…this is fascism,” Moussi said in the feed. “This is a systematic process to silence the opposition because the Destourian Party [PDL] represents the opposition in the country.”

Mehdi Ghazzai, a communications specialist and cofounder of the media and communications outlet LOOK TM who has gained attention for his Facebook posts analyzing politicians’ speeches, said he sees Moussi as being a “content creator.”

The [Facebook] live allows us to go to places we have never seen before, like the parliament… it is also well moderated with points A and B. She starts her lives by telling the audience what she will show them and ends it with that goal…that makes us [viewers] adopt her perspective,

In her Facebook lives, Moussi accused other parliamentary blocs of taking money from foreign parties, referring to how parliamentary assistants are receiving remuneration from the National Democratic Institute (NDI), an organization that was established by the United States Congress and receives funding from the U.S. government.

According to Ghazzai, Moussi uses “showmanship” to tap into people’s emotions, avoiding specific policy issues which might not inspire new supporters.

A PDL rally doesn’t “look like a political meeting but rather a one-woman show…she has a wholesome ritual with music at the beginning,” Ghazzai explained. “When you watch, it is something entertaining…how she tells jokes and makes impressions of other politicians…in a way she turns a popular meeting into a real show.”

“It’s good if you talk about your political perspectives, but that’s only for an intellectual audience that knows about politics. But when you learn how to use these showmanship skills, you will be able to stimulate sentiments and your messages would come across,” he added.

Moussi has begun to hold rallies and demonstrations across the country. She drew what appeared to be over 1000 people to a rally in Sousse on February 22, held another a rally in Beja on March 7, and staged a March 9 protest at night in Tunis against the International Union of Muslim Scholars, where the PDL alleged police used violence to disperse their supporters.

“She creates this imminent threat rhetoric, talking about the threats she keeps receiving and how someone wants to assassinate her, and who are the NDI?” Ghazzai said. “There’s always the “them” in the story, which we do not know about, and who want to harm Tunisia.”

But while some have been drawn to this rhetoric, many others do not believe the PDL are serious about making political change.

“Life is hard now, however, they are not present there for the people but to fill their pockets instead…I will not vote for [PDL] again because they won’t benefit me in any way in the future,” Meriem a 30-year-old judge told Meshkal/Nawaat.

“I am no longer one of Abir [Moussi]’s supporter because what I am currently seeing in the Tunisian political scene is not appealing at all and does not give any hope. I think that these political parties, whether Ennahdha or Moussi’s PDL, are only serving their narrow partisan interests,” she said.