Labiadh was wounded when state security forces shot him with live bullets during the revolution ten years ago. Since then, others who were wounded as well as the families of those who were killed have been demanding that the state officially recognize them as victims; they think such recognition will help them receive more public medical care and give them more legal ground to sue their attackers. 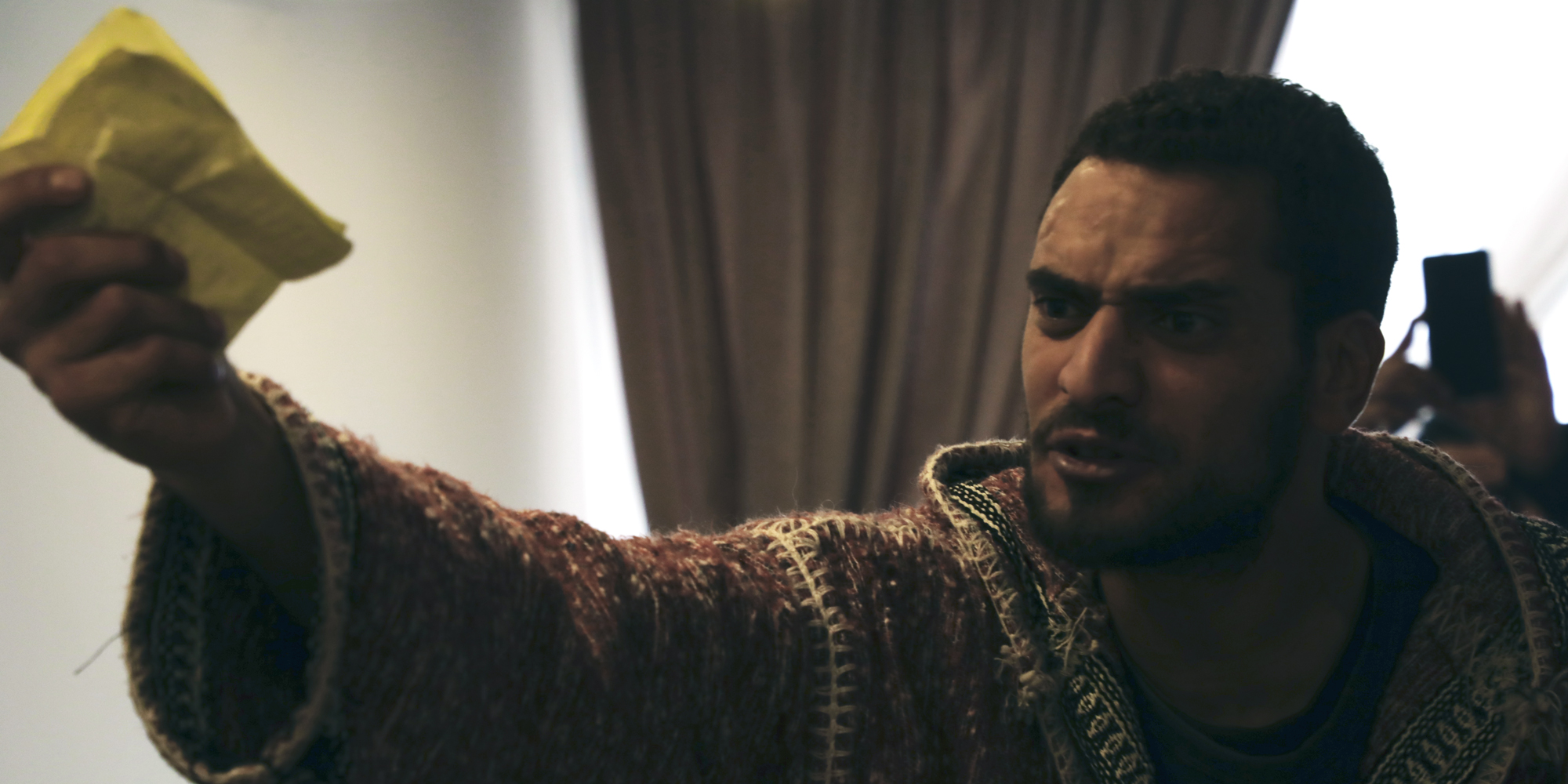 “I am sick of your 10-year injustice,” Labiadh continued, addressing Abderrazak Kilani, president of the General Committee of Resistance Fighters, Martyrs and Wounded Survivors of the Revolution and Terrorist Operations, a committee operating under the Prime Ministry.

Successive governments have promised to publish a list of those wounded and killed—popularly referred to as martyrs of the revolution—in the state’s Official Gazette (JORT by its French acronym) but have not done so, despite continuing protests by the victims. Now, protesters are taking increasingly desperate measures as their health deteriorates.Eight of the about twenty people participating in a sit-in in a hallway outside Kilani’s office at the time of the confrontation on January 6had gone on hunger strike and fourhad sewed their mouths shut as part of the protest. Since then more have joined the sit-in. 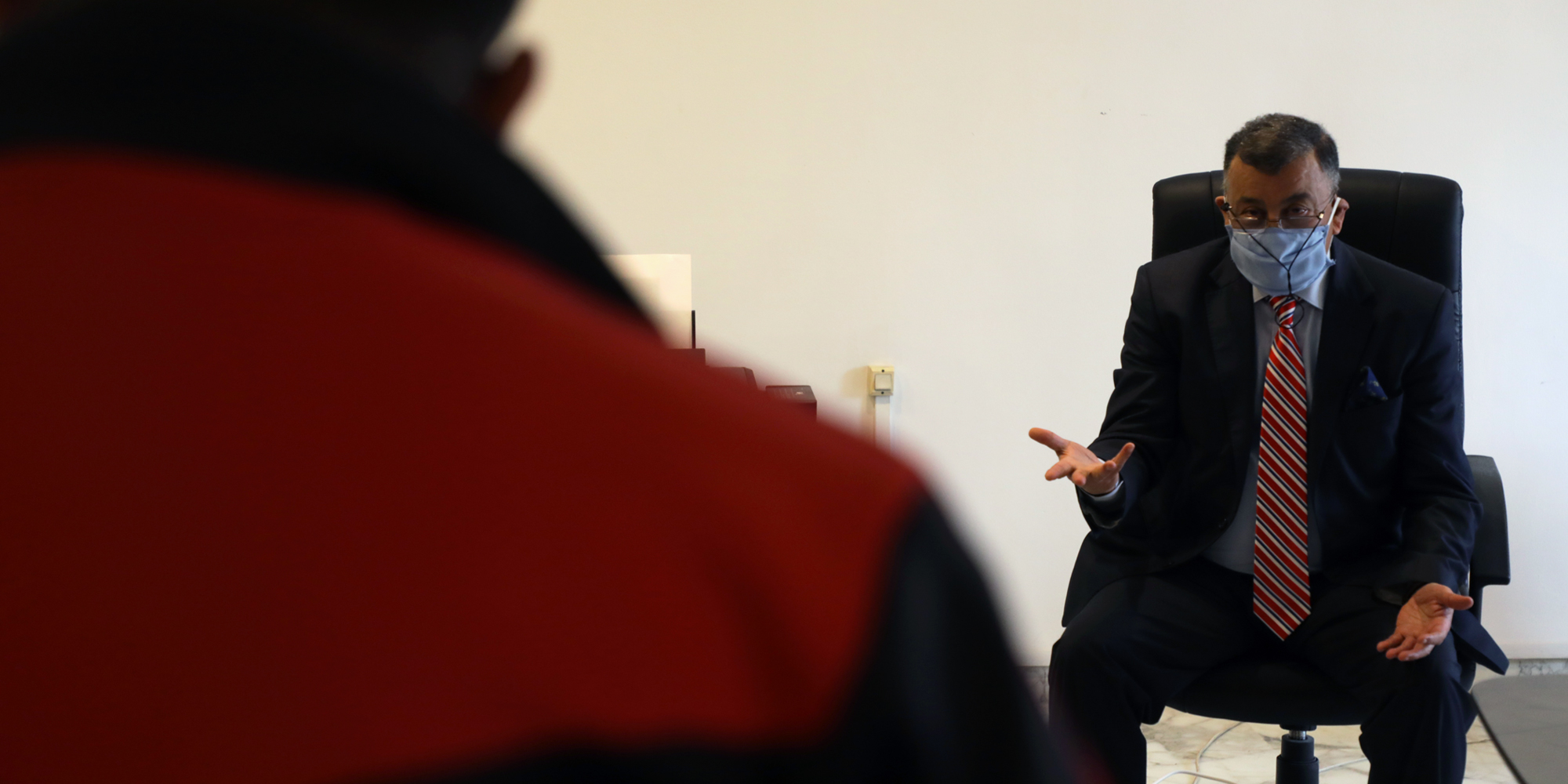 “From day one, I told you that I am not an enemy or an opponent, we told you that we stand with you and that your demand is legitimate,” Kilani said, addressing the protesters in his office, adding that publication of the official list of martyrs and wounded of the revolution was not under his jurisdiction but under that of another government body led by Taoufik Bouderbala: the High Committee on Human Rights and Basic Freedoms.

Bouderbala’s committee has already published a list on the committee’s website—on October 8, 2019. However the Prime Ministry’s authorization to publish it in the Official Gazette is still pending. The list online includes 129 killed and 619 wounded survivors, less than the 338 dead initially discovered by another State commission also led by Bouderbala at the time that conducted an investigation in 2011; Bouderbala recently told media that political calculations are behind the list not being published. Meshkal has previously reported on government promises to publish the list. 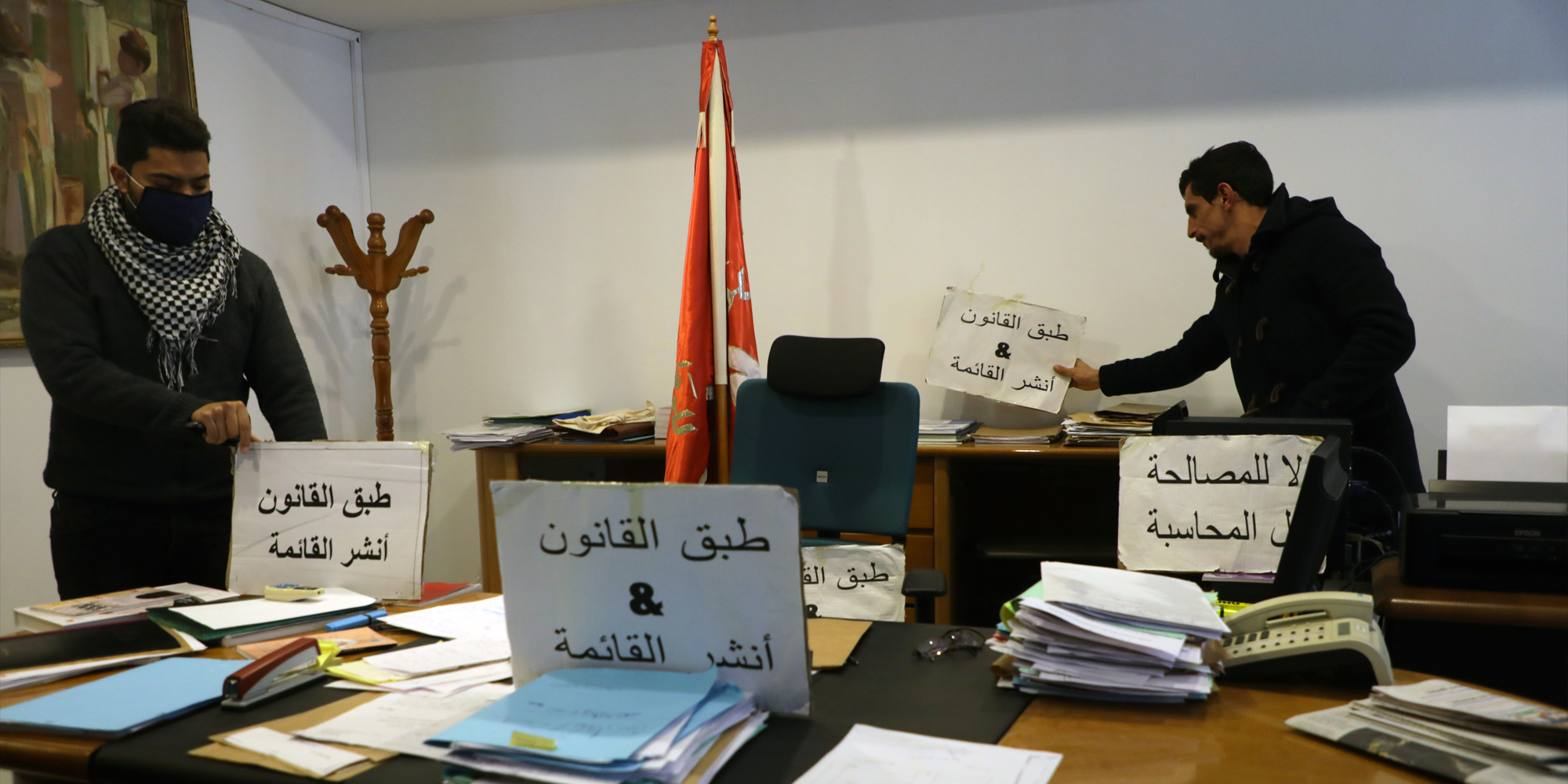 “Trying to Make us Hate Our Revolution”

But continued delays and different government offices laying the blame on each other are not the only factors driving anger among protesters; they claim that state security forces recently assaulted them again when they held a protest in front of the Prime Minister’s office in the Kasbah plaza on December 17, 2020, the tenth anniversary of Mohamed Bouazizi’s self-immolation that sparked the revolution. The Tunisian League for Human Rights (LTDH by its French acronym) released a statement shortly afterwards condemning security officials for using violence on the protesters.This violence, protesters say, is what prompted them to storm Kilani’s office and begin their sit-in on December 21.

What officials are doing is trying to make us hate our revolution,

Ben Nejma was shot by State security forces on January 13, 2011 in Ras Jbal in the governorate of Bizerte. He recounted the moment to Meshkal/Nawaat. 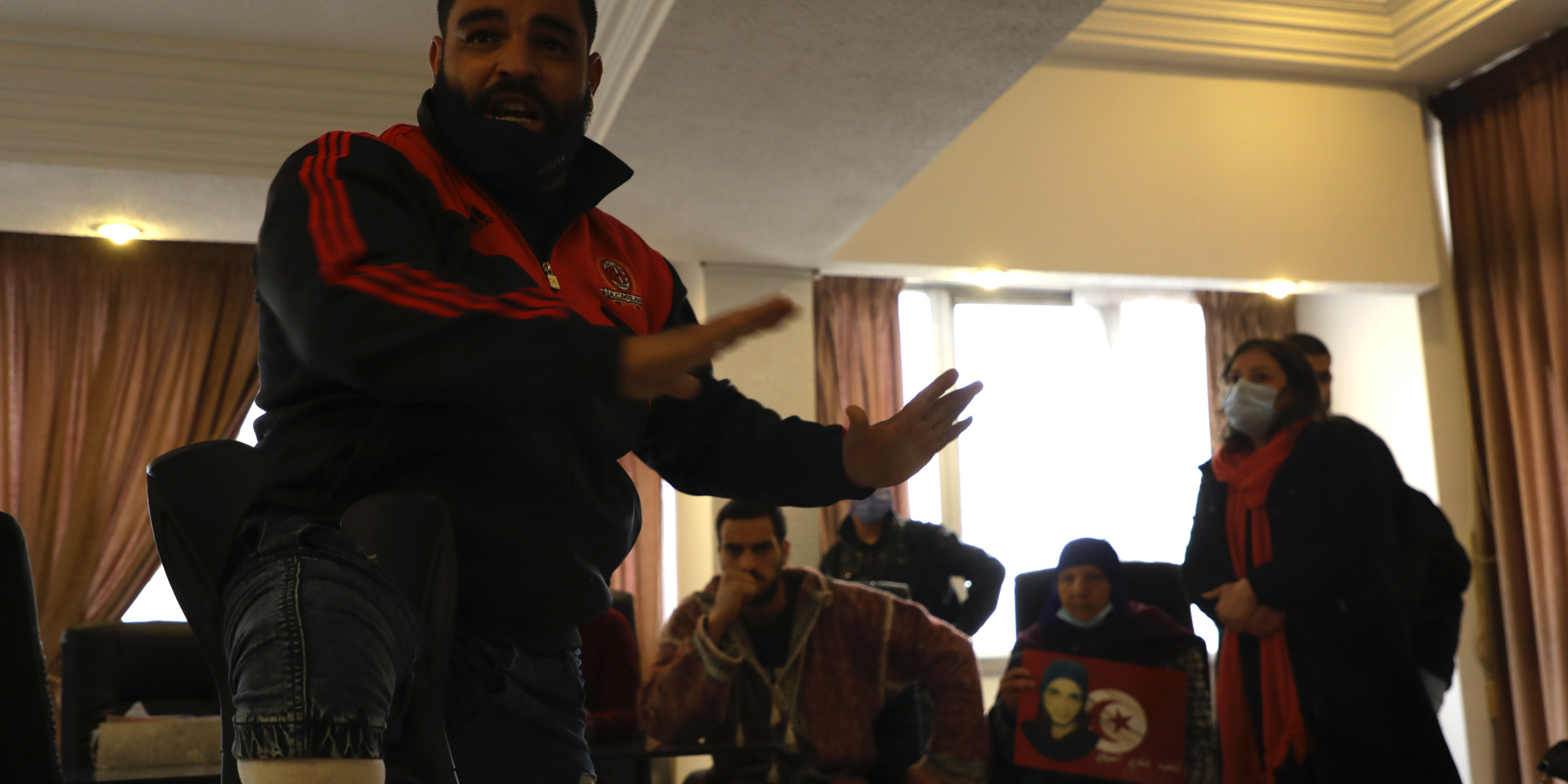 “I had bronchitis and I needed to go to the hospital. On my way I saw my neighborhood friend get shot right in the stomach, with his guts spilled out… It was a shocking scene, I forgot all about the protests and ran to check on him but instead they shot me. The first bullet hit me in the ribs; I thought it was a rubber bullet at first, so I kept going. The second hit me in the belly,” Ben Nejma said.

We feel we are screaming without voice,

Walid Kassraoui, a sit-inner who was wounded during the revolution, recently told Nawaat.

The protesters’ maindemand is that authorities publish the official list of martyrs and injured survivors of the revolution in the Official Gazette (JORT by its French acronym). This would allow the wounded to receive additional public medical care, sit-inners told Meshkal/Nawaat.

“We want our children’s names to be included in the national gazette to maintain our history, for our sake and our great grandchildren’s sake,” sit-inner Saida Seifi told Meshkal/Nawaat. Seifi is the mother of Chokri Seifi, who was killed on January 13, 2011 in the El Kram neighborhood of Tunis. “It is enough for any mother to see her child’s name to feel pride and honor… that is what we are asking for.” 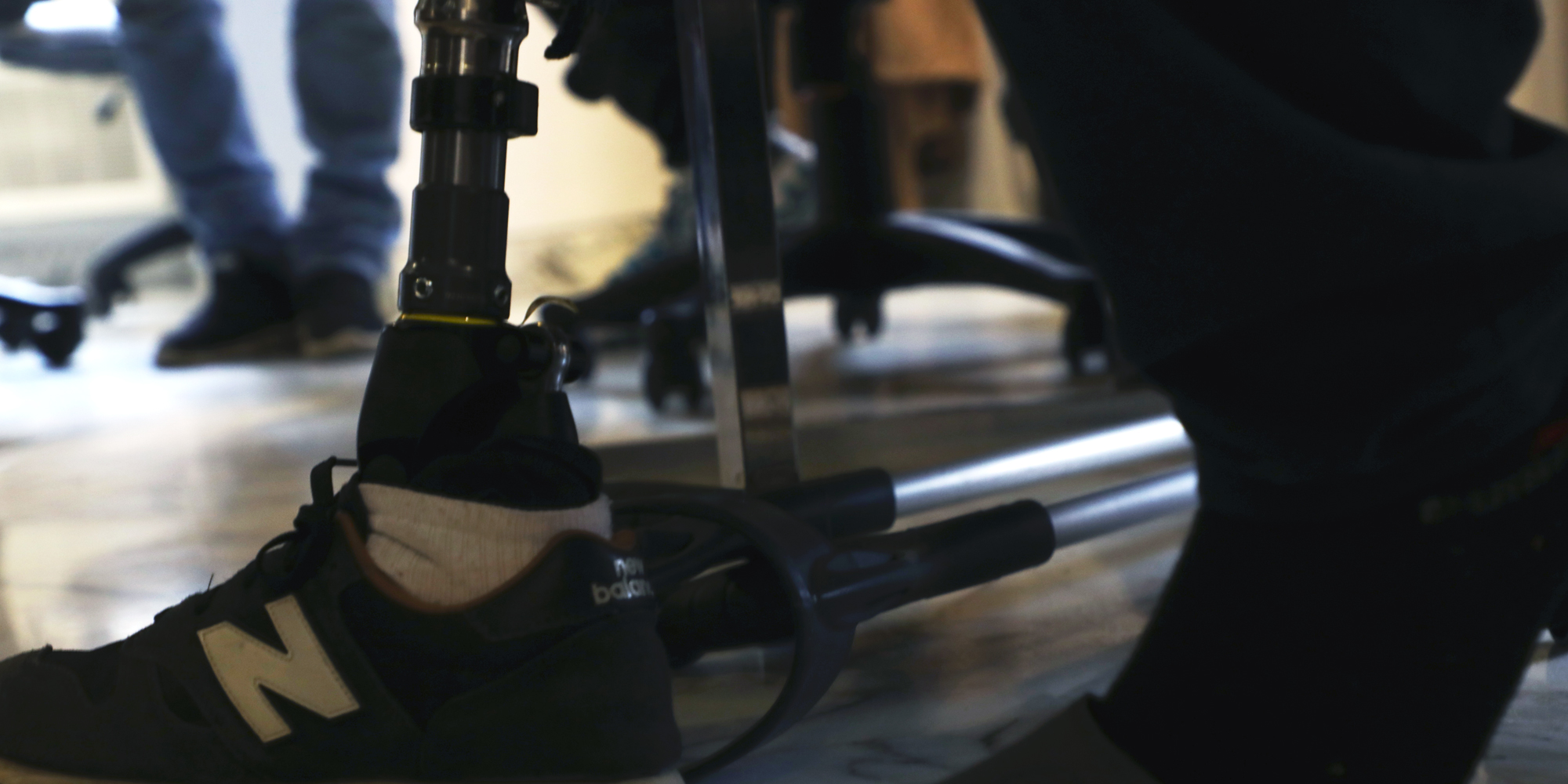 According to an official statement sit-inners made at a press conference on Tuesday, January 5, the list needs to be published “as a recognition by the state of its responsibility towards the crimes committed against the people in general and the martyrs and wounded of the revolution

Protesters told Meshkal/Nawaat they see political calculations at work in the continued delays, particularly political interests that are against the revolution.

“[This behavior] has a political incentive.They do not want to recognize the revolution … that’s why today we are demanding the application of law to reveal the truth and recognize the Tunisian revolution,” Moslem Gazdallah, one of the sit-inners who was wounded during the revolution told Meshkal/Nawaat.

Gazdallah was injured on January 15, 2011, in Ouardanine in the governorate of Sousse. The incident ispopularly known as the “Kais Ben Ali Affair” due to former ousted president Zine El Abidine Ben Ali’s nephew Kais allegedly giving orders to fire live bullets on protesters, which cost the life of 6 people and injured 13 others. Kais Ben Ali has denied involvement, noting he has only been questioned in court about the incident as a witness.

Gazdallah sees an irony in government officials not promptly recognizing the revolution and those who led it.

Whether you like it or not, the people in power are there thanks to the blood of martyrs… but now they are scared to publish the official list,

Saida Seifi echoed these sentiments, adding that “we have given them [officials] freedom and dignity; now we want our children’s rights and we tell the state that it is not a privilege [to recognize us].”

Dying Before Being Recognized

One reason for the renewed urgency of the protests is that some of the surviving victims have already died or their health is deteriorating rapidly.

“We are already dying…Mohamed Hanchi, Tarek Dziri and mothers and fathers of martyrs have died,” Gazdallah said, referring to two people who were wounded during the revolution who have died. “We are dying a slowdeath, day by day, and that is exactly what they want.” 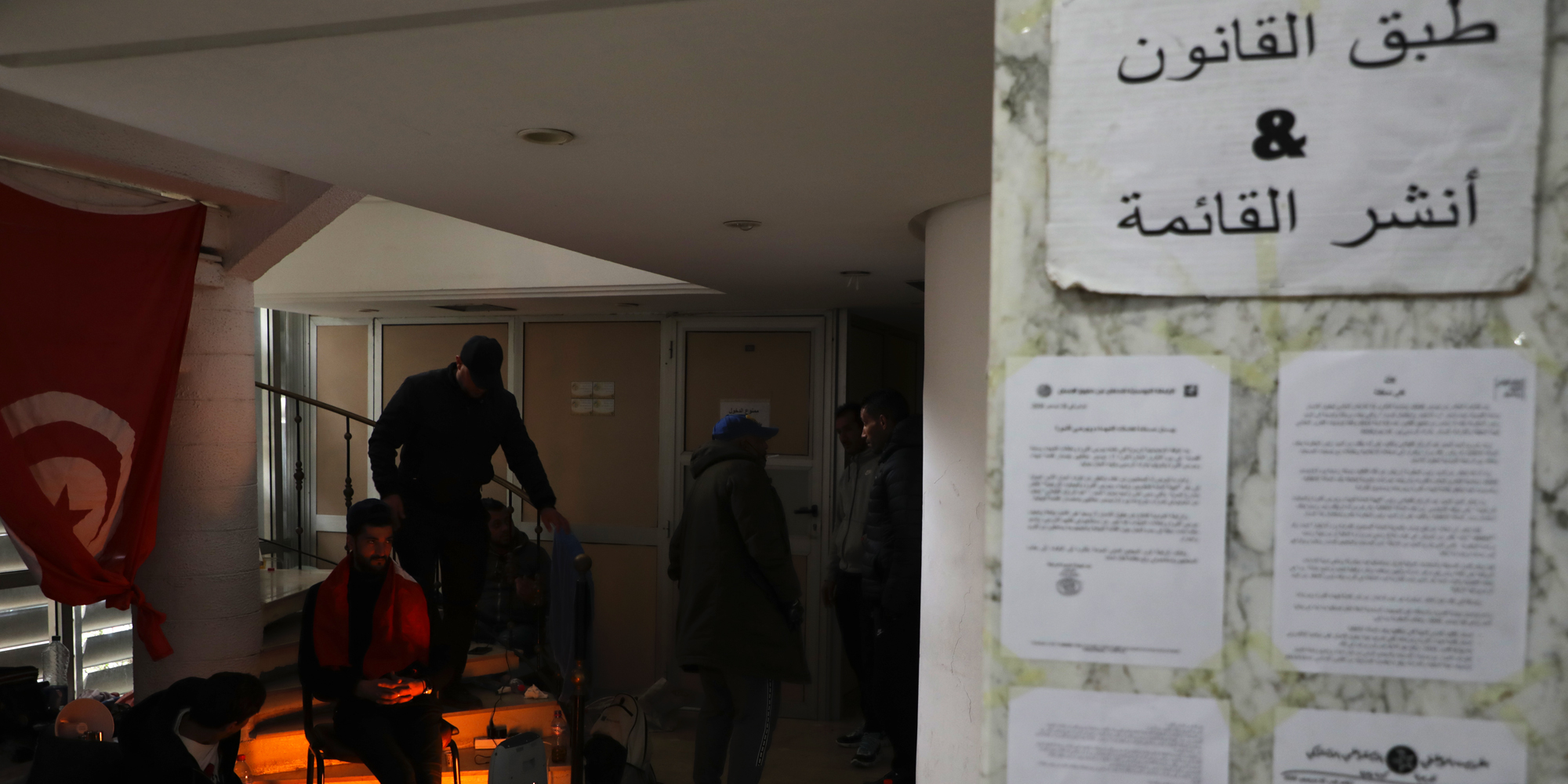 Tarek Dziri passed away almost one year ago due to health complications; Gazdallah lays blame for thaton the successive governments who have stalled publication of the official victims list, because publishing that list might have helped Dziri claim and receive better public medical care.

“Whenever [Dziri] needed medication, we had to strike. If he needed an ambulance to transfer him to Tunis, we were always obliged to escalate to pressure them,” Gazdallah explained.

“After the list, we demand medical treatment and holding the people who committed crimes accountable… they believe that accountability has been settled… but today we are dying, we need treatment to continue resisting,” he added.

Others are suffering from mental health issues which they see as linked to their struggle for recognition.

“One of us tried to slash his wrist yesterday out of despair; we were barely able to stop him,” sit-inner Wael Karrafi told Meshkal/Nawaat.

Official state recognition might give those wounded or the families of those killed by security forces stronger legal ground to pursue their assailants in court.

“If this list is published, I will be able to prosecute the police officer who hurt me,” said Karrafi, who had to have one of his legs amputated as a result of injuries he suffered when police used live ammunition on protesters in Kasserine on January 10, 2011. Karrafi was 19 years old at the time.

Karrafi addedthat victims like him are being constantly targeted and deprived from health care due to their status as wounded survivors of the revolution.

Adding to their sense of injury is the fact that instead of being recognized or celebrated on the 10th anniversary of the revolution, they were assaulted by security forces once again on December 17, 2020. 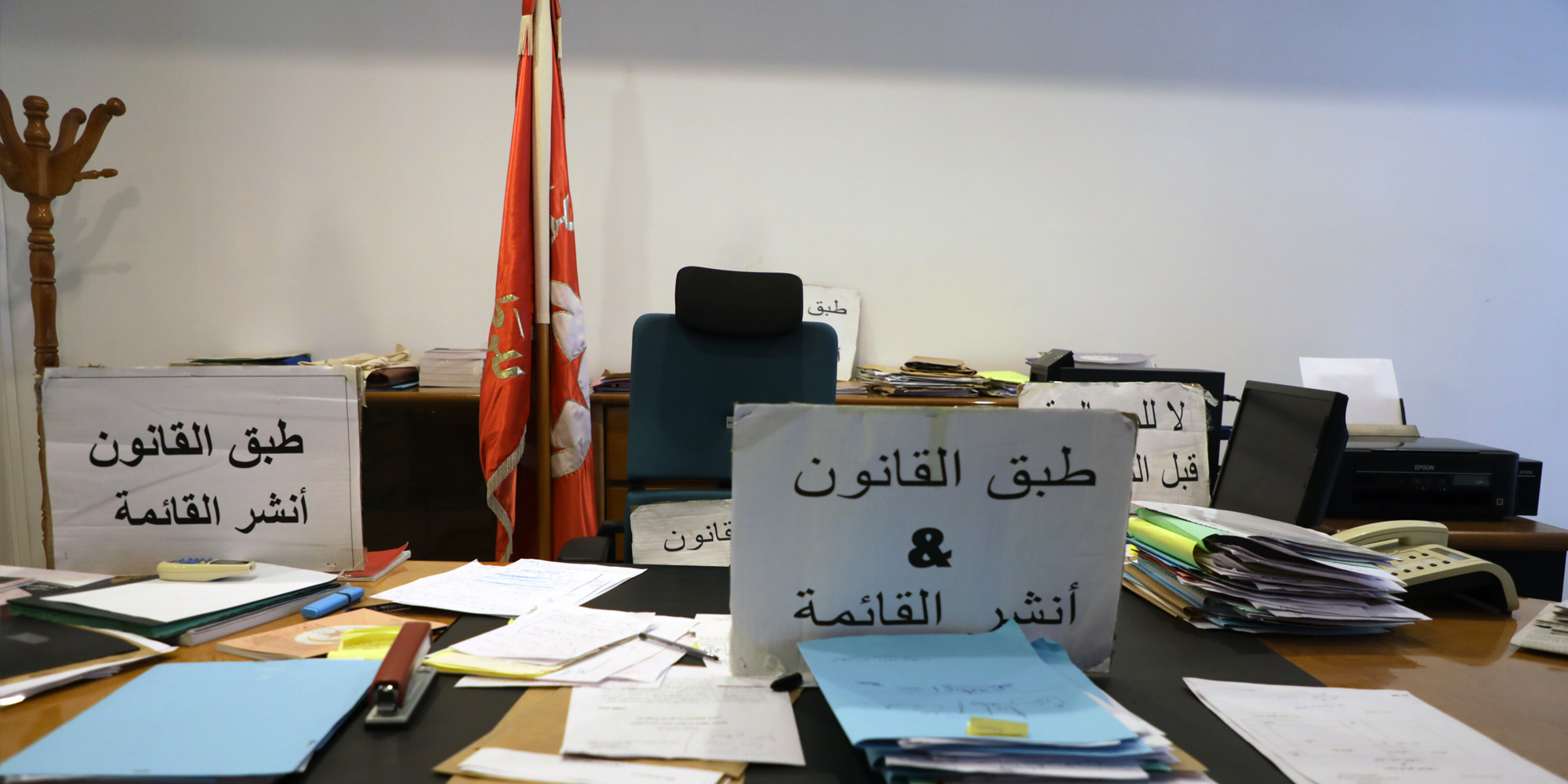 “These people were insulted and hurt on the 10 year anniversary of the revolution instead of having their situation settled,” said Torkia Chaibi, member of the Executive Committee of the Tunisian League for Human Rights (LTDH).

Chaibi also called on civil society groups to step up their support of those wounded and the families of those killed in the revolution.

“Today, it is very important for civil society actors, especially the National Dialogue quartet, to move together and put pressure to publish the final list of the martyrs and wounded victims of the Tunisian revolution,” Chaibi said.

Since the January 6 confrontation between sit-inners and Kilani, the sit-inners have moved from the building’s hallway to Kilani’s own office on the 7th floor of the building and more sit-inners have joined the protest. On January 11, protesters brought fuel to the office with some of them threatening to light themselves on fire, with members of the Tunisian General Labor Union (UGTT) stepping in to try and deescalate, according to Facebook posts and videos shared by the protesters.

Some activists supporting the sit-in told Meshkal/Nawaat that they heard that Speaker of the Parliament and Ennahdha leader Rached Ghannouchihadset up a meeting between Prime Minister Hichem Mechichi, Abderrazak Kilani, Taoufik Bouderbala, and Seifeddine Makhlouf, the head of the Parliamentary Committee on Martyrs and Wounded of the Revolution and of the Implementation of the General Amnesty Law and Transitional Justice, which allegedly reached an initial agreement topublish the list on January 14, 2021, the ten-year anniversary of Ben Ali fleeing the country during the revolution. Meshkal/Nawaat was unable to confirm these claims.