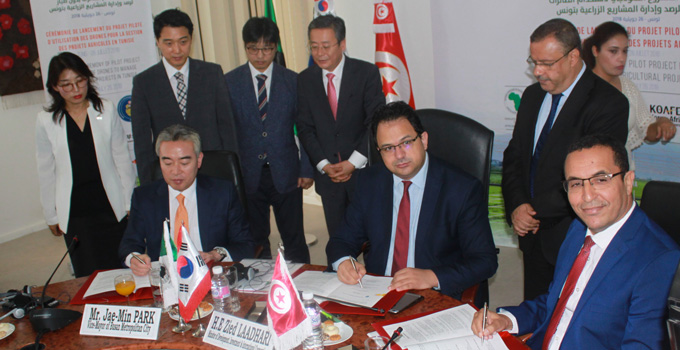 At the end of July, Tunisia’s Ministries of Development and Agriculture unveiled plans for 10-month project that will be delivered by South Korea’s Busan Techno Park, with the African Development Bank (AFDB) to disburse funding. Sometime around December, drones will be deployed in the central governorate of Sidi Bouzid « for a better management of development projects in the agricultural sector ». Korean experts will oversee the project from A-Z, bringing along the drones and information systems, managing their development and deployment, and training Tunisian engineers how to operate and maintain them.

An early drone prototype for agricultural use, abandoned

Following the announcement of the pilot drone project in Sidi Bouzid, the experience of software developer Hamza Chouaibi is a telling glimpse into the inflexibility of current regulations and skepticism of Tunisian authorities regarding UAV use. Beginning in 2016, Chouaibi’s software company Portals Way SUARL was developing a drone prototype for small to medium agricultural operations in Sidi Bouzid. « We started by creating a prototype which was 80% completed and we did a few test flights », Chouaibi tells Nawaat. He remembers that « the issues started from day one when we tried to buy components. Despite the project being under the supervision of the Institut Supérieur des Etudes Technologiques (ISET), a public higher education institute, we didn’t receive any support from the institute to help us clear customs. I had to go personally to Tunis, a 550km drive. Then at one flight test, we were reported to the police and had to be questioned for 3 hours about the drone, despite showing all the documents from ISET. The outcome was the police asked me to request authorization before any further testing which is not a convenient solution ».

In the end, Chouaibi and his team abandoned the project. The experience is not an uncommon one along with other stories of arrestation and confiscation of equipment, or still other cases of those who, daunted by tedious administrative procedures, find ways of circumventing formal authorization altogether. In any event, all are symptoms of a discrepancy between the dizzying rate at which new technologies are developed and the comparatively snail-paced adaptation of policies to regulate them. In Chouaibi’s case, this very possibly meant a lost opportunity for the marketing and application of locally-developped UAV prototype in Sidi Bouzid.

Don’t count on flying your drone in Tunisia

On the African continent, 12 countries have passed UAV-specific regulations, 8 have added UAV-specific provisions to existing aviation regulations, 5 have placed moratoriums on drone use, while 22 African nations do not have drone-specific regulations. Tunisia is in the last group. This does not mean that filmmakers, researchers, tech developers or even tourists have free rein to fly their mini aircrafts over Tunisian soil. On the contrary, as innovations in drone technology abound in Europe, Asia and the US, Tunisia’s skies have remained relatively dronaphobic. This is because a ministerial law from April 6, 1995 prohibits « all persons from photographing or filming from an aircraft, Ultralight airplane, hot air balloon or other means of air travel over the Tunisian territory without having previously obtained authorization ». An authorization which requires the approval of at least four authorities, including the Ministries of the Interior, National Defense and Transport, before a permit can be issued by the Ministry of Equipment (for commercial, scientific or personal requests) or Ministry of Tourism. And still, authorized drone operations and the printing of photographic shots taken must be conducted in the presence of the Defense Ministry.

A policy deemed exceedingly restrictive by Tunisians who would like to see UAV technology become accessible in Tunisia for creative, scientific and other purposes. A social media campaign Sayeb_el_drone launched last August and online petition diffused earlier this year denounce arrestations that have taken place based on the ministerial law, and call upon lawmakers to enact new UAV policies. For now, individuals and small-scale developers are up against cumbersome administrative procedures that represent a considerable obstacle to the progress and sometimes even the possibility of bringing their projects to fruition. 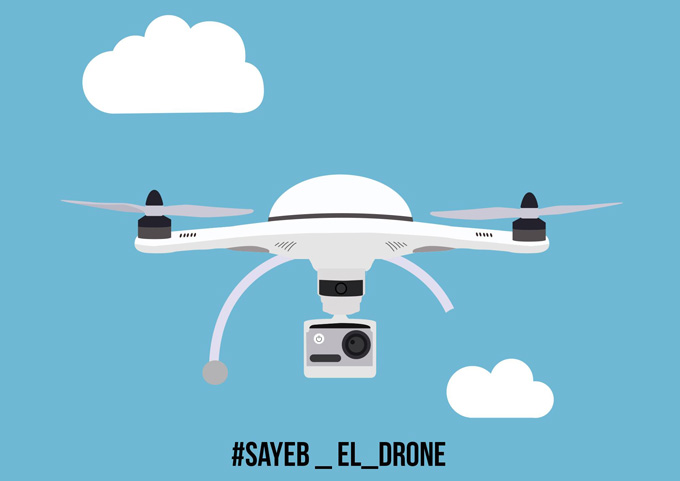 UAV data collected in Tunisia will remain in Tunisia

In the meantime, the Ministry of Agriculture affirms that it has already obtained the necessary approvals and authorization for the pilot project in Sidi Bouzid. Abdelhalim Guesmi, the Ministry’s project coordinator, confirms that these steps were taken even before the convention was signed, in large part to ensure the smooth passage of drone equipment through customs. Precautions taken, Guesmi explained to Nawaat, in deference to national security priorities: the data collected, as well as the equipment used to collect them, will not leave the country. Once the experts designated to run the project return to Korea after ten months time, the information gathered and drones used will remain in Tunisia, to be operated and maintained by Tunisian engineers chosen from a range of ministries.

Will South Korea’s drone experiment in Sidi Bouzid move Tunisia closer to revising existing measures or even devising new ones for UAV technology? Guesmi’s simple response is that the experience will help to inform future policy changes. With so much interest and investment in the technology internationally, drone use will almost certainly take off in Tunisia as it has elsewhere, but how and who will drive and shape this trend will depend on how and when the respective regulations are adapted.

Drones, the trending prescription for food security in Africa

The use of UAV technology in agriculture may be new to Tunisia, but the concept is a hot-ticket item on the continent, where drone manufacturers and development agencies alike have been promoting the technology in its capacity to « transform Africa’s agricultural production ». While the UN’s Food and Agriculture Organisation (FAO) advocates for drones as a « miracle in the despair of food crises », a means to boost food security and end hunger, the AFDB and World Bank are investing in « scaling up proven technologies across Africa aiming to boost productivity, and to make Africa self-sufficient in key commodities » through the Technologies for African Agriculture Transformation (TAAT) initiative.

With South Africa’s early adoption of UAV-specific regulations (in 2015, the country became among the first five nations worldwide to do so), Rwanda’s ostensibly successful drones-for-blood-delivery model launched in 2016, plus a handful of projects in West African countries since September 2017, the African Union (AU) has officially taken its place among major advocates of expanding UAV technology on the continent. In June, the AU published « Drones on the Horizon: Transforming Africa’s Agriculture » a 46-page report urging member states to « harness drones for agriculture ». On the basis that « precision agriculture-drone nexus is seen as enhancing the socio-economic well-being of Africa », the Union recommended that African nations « establish enabling regulatory frameworks for UAV technology to be deployed and up-scaled to serve precision agriculture ».