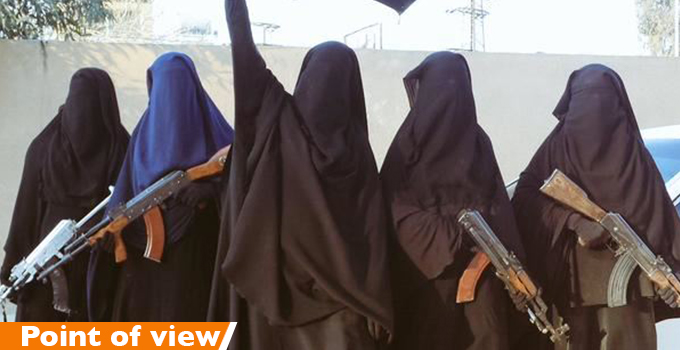 Unlike for men, the role of women as ISIS terrorists remains relatively unexplored and research on the subject is limited. When it comes to analysis, the common narrative within the community working on Preventing and Countering Violent Extremism (P/CVE) commonly reduces women’s motivation to a desire to be a “Jihad Bride“or “Jihad Al Nikah”, and neglects other factors motivating young women.

Such narratives reflect how we are not taking women seriously even when they make the life-changing decision to join one of the most violent groups in our modern time. When we talk about men and radicalization, experts refer to political grievances, economic situation, identity, and so on. When we talk about women, we bring sex to the conversation. But as is the case for men, women’s radicalization is also a form of political engagement, a new form of political expression and a new way to claim the public space that has been denied to them.

And women suffer twice. On the one hand, women have the exact same political, economical and social grievances as men. On the other hand, women are also victims of deeply rooted gender inequality, gender-based violence and all sorts of gender-based discrimination. What if their radicalization is more than a mere expression of political and economic grievances but also revenge against a political and economic system and social norms that always treated them as second-class citizens? A system that left them beaten, raped, denied basic human rights and dignity. To put it simply, a system that left women in all walks of life behind. Much more than men, women who join ISIS have several reasons to associate with a movement against structures that have not met their most basic needs. Understanding the motivations of men and women alike is fundamental.

However, solutions implemented to engage women in preventing and countering violent extremism have so far not been progressive. Instead of reducing gender stereotypes, P/CVE programs actually reinforce them. An example are programs based on the notion of “motherhood”, which assumes that mothers have an influence on encouraging their kids to pull out from ISIS. Such programs put more pressure on women, making them feel guilty and emphasizing the idea that mothers are the one and only person responsible for their children’s education. By using the emotional capital of motherhood, we are trying to address a “public” problem through a “private” solution. What we need is a public political response to a public political problem.

In addition, fixing women’s roles in programs which encourage mothers to capture the early warning signs of radicalization, extract information from their kids and provide it to security forces, without offering them safe channels of communication, puts women’s safety and security at risk, and also encourages an unhealthy culture of spying and suspicion among families and communities.

In the absence of reliable data on women fighters’ perspectives, it is difficult to design gender-sensitive policies on prevention and countering violent extremism as well as on the reintegration of returnees. But one thing is certain: we should contest conservative and outdated approaches and programming that further stigmatize women. If you want to engage women, start first by genuinely listening to them. As a convinced intersectional feminist, I believe that the most effective P/CVE and reintegration programming is one in which gender equality, social justice and democratic values lie at the core of its philosophy.