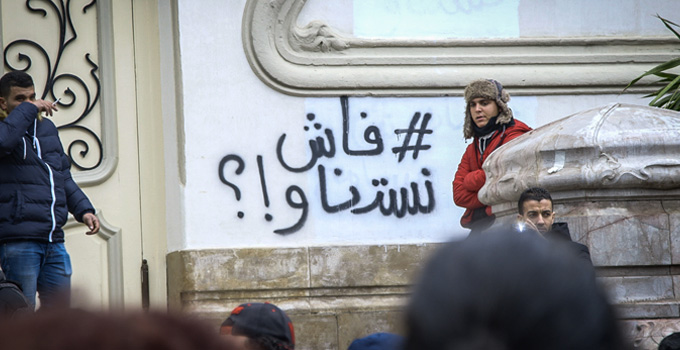 « Come and bring your demands and those of your neighborhood! », it was « Fech nestannaw» [What are we waiting for?], the protest campaign against the recently approved 2018 finance law, that called citizens to join in a march to the town hall of Tunis on Friday, January 12. Turnout was fair, undoubtedly dampened by the rain. It was drizzling when protesters gathered on the steps of the Municipal Theater downtown, holding up campaign flags, yellow penalty cards and baguettes. Around 1:30pm, the group mobilized, drawing in supporters as it moved along Avenue Bourguiba. A colorful repertoire of chants denounced the new finance law (« The people want the fall of the budget »), but also economic corruption (« The people are fed up with the new Trabelsi family »), and party politics (« Both Ennahdha and Nidaa are traitors »). Demonstrators also mocked public statements discouraging citizens to hold nighttime protests, chanting « Here we’ve come in the daytime ».

Marchers stopped short of their destination, held back by a blockade of police protected by helmets and shields. The energy shifted as protesters and security came face to face. For a brief moment, the sky cleared and sunlight spilled over the sea of bodies, which by now had grown considerably. There were a mix of activists and members of different movements and unions including Manich Msameh, Moush Ala Kifek, the Tunisian General Students’ Union (UGET) and the Popular Front party. There were also dozens of cameramen and as many reporters and foreign journalists. In a high apartment building close by, some had climbed out of windows to watch and film the scene from overhead. Beneath them, businesses on ground level had all closed up, metal shutters pulled down to protect storefront windows.

Police held their ground while marchers pressed towards them, chiding « Ministry of the Interior = Ministry of Terrorism ». The tension was palpable as Fech nestannaw member Hamza Nasri made his way, chanting, into the center of the crowd. We intercepted him to ask about the campaign’s objectives. Nasri stopped to explain that “the movement aims for the reversal of increased prices, job recruitment for members of poor families, health coverage for the unemployed, and the release of the 75 activists who have been arrested. Unfortunately, said Nasri, in spite the campaign’s clear and peaceful communication, the government has not only refused these demands, but has responded with force and aggression”.

Nawaat also spoke with UGET spokesman Nidhal Khadhraoui. Before arriving downtown, Khadhraoui was at court for the hearing of activist Ahmed Sassi, accused of conspiring to destroy private and public property. Khadhraoui said that “demonstrators were demanding the release of Sassi and other activists who had been arrested in front of their homes“. He said that similar demonstrations were simultaneously taking place in Monastir, Sousse and Kairouan, and that protests would continue in Gafsa and Sidi Bouzid on Saturday, and in the capital on Sunday, January 14.

As Nidhal spoke, the crowd behind him seethed and people began running back towards the Avenue. Amidst the agitation, he managed to conclude, « After seven years, nothing has changed. We’re not going to wait any longer ». Several protesters resisted the commotion, urging people to remain calm and to their hold ground. The same panicked dispersal threatened twice more before a few determined individuals coaxed people back to the area where police had blocked access to town hall. At one point, the sound of engines rose up, seeming to fill the streets surrounding the protest. People craned to see where the noise was coming from. A new line of police officers on motorcycles had formed close to the Avenue, commanding the crowd’s attention. As if accepting a challenge, demonstrators turned and headed towards them, chanting and waving campaign flags. When the police revved their engines and rode off back towards the Avenue, people shouted out triumphantly « Go back! Go back! ».

In the end, protesters returned to the steps of the Municipal Theater, never having reached town hall. Amna Guellali, the country director for Human Rights Watch, trailed not far behind the march. She told Nawaat that “the number of those arrested since protests began in early January had reached about 700. While some of these arrests involved individuals who had participated in looting or violence, she said, it is clear that a number of arbitrary arrests have targeted political and campaign activists”.