Erkiz Hip Hop innovates. Rap and mezoued are the expression of two different eras but have almost the same trajectory. Ignored and even renounced for a long time by the mainstream, these two music genres are the guests of honor of the event. The adventure of mixing hip hop and mezoued had always been a seductive idea for Trappa, the coordinator of Debo crew. By borrowing from the mezoued its authentic melodicity, rap brings its dissenting rhymes at the pace of the darbuka’s ornaments, far from the ease of intertwined choruses and the simplistic sampling. The structure is meant to be surprising and experimental, enriched with sonorities of smooth jazz and reggae accents. Saturated with a rich background of urban and traditional music, the artists of Erkiz Hip Hop show have offered, to the few hundreds of people in the audience, a concert which experimented with the crossing of genres and disciplines. Special mention for the instrumentation carried out by Jihed Khmiri, bringing together a wealth of percussionists to bendirs and darboukas, a bassist, a guitarist, a keyboardist and a drummer. 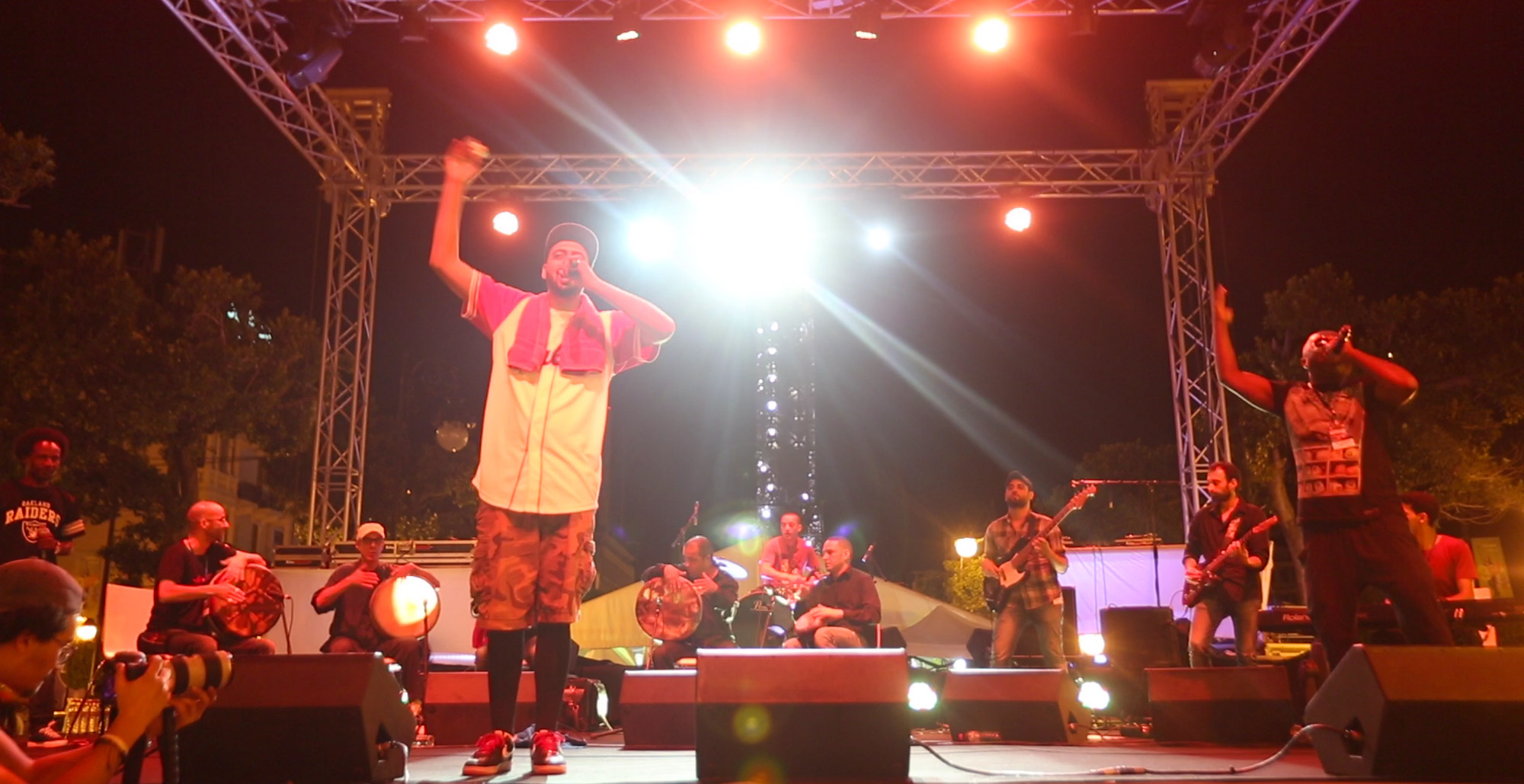 Through Erkiz Hip Hop, the emerging scene of Tunisia shows one of its most unknown facets, both jovial and enraged. For rappers, “it is a true challenge”, confides to us Belhassen, Tunisian rapper from the band Empire. The same term is used by Mombi of 3ème Œil, a band from Marseille. In fact, the mezoued is played on specific ranges and has its own rhythm mode. It is therefore a tremendous achievement for the composers of this creation and for the rappers. Yes, because it is necessary to make mezoued “rapable”, says the percussionist Malek Ben Halim aka Paco after the concert.

Nevertheless, structure wise, this creation is really nothing but a follow up of songs alternating the benefits of franco-Tunisian featurings that are not always convincing. An offset is observed between Tunisian and French rappers, some less comfortable in this merger. Diluted in an institutional approach, the concept seems to have been sentenced to be formatted, due to pushing the collaboration between artists of the two shores of the Mediterranean to the detriment of the harmony between their styles. For example, the contrast is striking between two meetings of two French artists with the same Tunisian rapper. If Demi Portion has found Vipa to be his sidekick in the sharp flair, Ichon has sunk and has not been able to catch the lifeline launched by Vipa.

However, if this ambitious project is not entirely successful, let’s hope that this is only the prototype, and that it will continue to be developed. Erkiz Hip hop has inaugurated a musical and scenic practice which detonates in the current rap, where the traditional instruments can play a key role in the service of a deeply contemporary and original music. A new concept to follow.