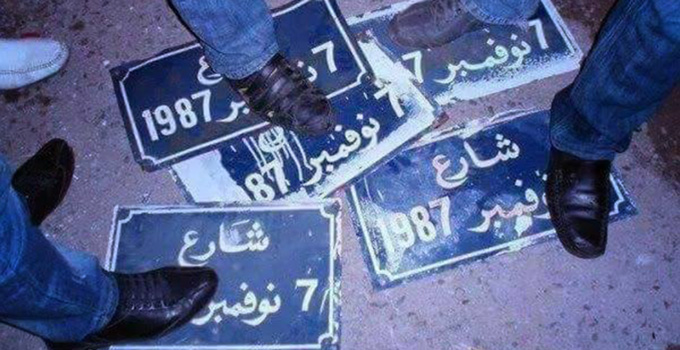 Until recently, the sociopolitical scene in Tunisia was static, rife with recurring pictures and sounds. Life was monotonous, tedious. No wonder life became boring under the penumbra of unilateralism which was a distinguishing feature in the Republic of Fear. For decades, the country was ruled by one General and one party. Over the years, only one military voice rang in our ears day and night, stimulating, for some, a sense of repulsion and suspicion, for others, praise and glorification. Over the years, newscasters were the same men and women accustomed to repetitive flattery of which they never became bored. For years, neither primary school directors nor secondary school headmasters changed. College deans, governors, and mayors preserved their jobs and prerogatives. The marginalized interior regions did not change, and the same went for impoverished faces marked by misery.
Thus was life in Tunisia. But the picture was still darker. If you expressed dissatisfaction, said amongst a circle of friends that people were fed up, that the situation was boring, you were likely to be overheard by a supporter of the status quo who would respond that you were in “the era of change.” The propagandist discourse which followed harped on key points: there would be no change after the watershed event that brought Zine Abidine Ben Ali to power; stability and security were a blessing, satisfaction with reality a treasure, and each bureaucrat a source of wealth even if suspected of favoritism or bribery or peddling or torture. Tabloids proliferated like mushrooms and excelled in bashing political opponents. To criticize any of this was considered a sin.

In spite of the misery which such unilateralism caused, we often took advantage of intellectual debates to discuss with our professors and inquire about a spectrum of issues that were considered taboo in those dark times. We were not frightened or embarrassed to talk openly about such issues in class. Our Arabic professor, an ambitious, enlightened man, had leeway to raise key questions about the Derridean concept of the culture of pluralism and diversity, or about Azmi Bishara’s notion of civil society, or El Jabri’s analysis of the Arab Mind. We used to enjoy what he said. Attending his class was a great pleasure.

But the machinery of censorship was ubiquitous. One day during Ben Ali’s presidency, we were engaged in debate with our teacher when the school director entered the classroom. He delivered a sermon on the virtues of the political regime, poisoning our ears and spoiling the pleasure we derived from debating the qualities of pluralism and diversity. His talk focused on “the miracles” of November 7, 1987. He told us that “the blessed change” came about through divine wisdom and guidance, that the November 7 was a blessed date since it evoked the Seven Heavens, the Seven Wonders of the World, and the Seven Tours of Circumambulation in Ka’bah. “It is blessed and will remain blessed forever as such a change is fated to be safeguarded from the plots of cunning political opponents.” Like all of my colleagues at the time, I was overwhelmed by a sense of injustice and oppression. The sermon ended and the school director left. We asked our teacher about the feasibility of a society made up of mostly young and educated people, naive and idiotic. Our teacher hummed to himself and didn’t utter a word.

Today, the era of humming, of fear and control of opinion, is over. The Revolution opened the door to a culture of diversity and political pluralism where every citizen can participate actively in public affairs, can express his opinion freely. Criticism of the ruler by the ruled has become a daily reflex, a pivotal feature of the political landscape, the media, and intellectual life. It suffices to consider the legislative elections to observe that thousands of candidates competed in a democratic and peaceful context. It suffices consider the presidential election to observe the kind of freedom dozens of competing candidates enjoy. As the country undergoes transition, the individual has become master of himself, free to make his decisions, to decide which way he wants to be governed, experience the pleasure of pluralism, compare and contrast political opinions, choose his lifestyle. There is no intimidation as the individual, free of coercion, fearlessly chooses his clothing, beliefs, and ideology, so long as that ideology respects the principle of peaceful co-existence, does not threaten social peace, and recognizes the liberties and rights of alterity.

It is crucial to recognize that stereotypes have faded, that the tenets of unilateralism have crumbled, and that the culture of pluralism and diversity has become the main feature of Tunisian society. The numbers of political parties, media outlets, and forums for discussion have increased remarkably. Criticism has become pleasure both on a personal level and in the social context, in a free environment which secures one’s right to pray in the morning, write a satirical article about a minister or the President at noon, compose a romantic poem in the evening.
These are the signs of democracy, that arduously won but pleasurable experience, the preservation of which is more than a duty; it is an obligation.